Thwipster -- Daily Deals for Your Inner Geek (not spitting on Hipsters) -- Interview. 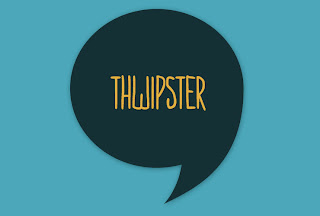 Thwipster is nascent deal-of-the-day site for comic book and pop culture enthusiasts.  It's like a "Groupon for Geeks!"

They offer only one product a day at a heavily discounted rate.  It's accompanied by a short video, photos, and some contextual information.

Thwipster launched April 27th and its first offering was Absolute All-Star Superman at $40 off the cover price.

Since then they have been going gangbusters, selling out of everything they have put on their daily deals.

Some of their past offerings have been things like Ultimates: Ultimate Collection Volume 1 for $14.99, Grant Morrison's Invisibles Volume 1 for $11.99, The Boys Volume 1 Limited Edition Hardcover for $15.99, and Chris Ware's Acme Novelty Library Volume 20 for $13.99.

I've been wondering about who was behind this great site and how the heck they are able to do what they do, and do it so well.

I contacted the appropriately named Lance Sells, CEO, Director, and "Chief Officer Prime" of Thwipster, to find out more.

The complete interview is after the jump...


FOG!: How would you describe Thwipster?

Lance Sells: Our tagline is “Daily Deals for your Inner Geek”. We have a “daily” deal fives days a week with the Friday deal running through the weekend until Sunday night/Monday midnight. We also have a weekly deal starting every Tuesday night/Wednesday midnight and going for 7 days. We don’t really think of ourselves as retailers but a little more like curators of what we think is some of the best stuff out there in graphic novels, toys, collectibles, and other items of geekery.

FOG!: Tell me a little bit of your background ?

LS: My background is strictly on the creative side of things. 6 years ago I founded and have been the Director of Motherland(www.motherland.us) which is an animation and motion graphics studio in NYC. We’ve done quite a bit of work for Marvel and DC so there’s a little bit of a connection to Thwipster in some of the things we’ve worked on. Besides Motherland, I’ve worked in advertising, the CG industry and my first job ever was working for Rob Liefeld as a penciller on a couple of unpublished books.

FOG!: How did you get the idea for Thwipster?

LS: My brother(co-founder Chad Sells) and I would sit and have long talks about comics, Star Wars and all of the things we loved as kids and he would always mention that he wanted to open an actual real-life comic store in his area. My thoughts would always go to doing something online that’s a lot more curated and simplified but also gives more context to the actual thing being sold. Together we came up with the idea of using the daily deal mechanism to sell the things we love.

FOG!: Where did the name come from?

LS: It’s an old family name that came from our great-great grandparents in Europe. When they made it to America their names were changed to Parker by the Imperial Guards at Ellis Island. :)

FOG!: What have been the challenges with the start-up?

LS: I could complain about how rough it’s been since we launched and how little sleep we get but seriously, the response has been so insanely positive that pretty much every challenge has been rewarded tenfold. We’ve been trying to answer everyone’s questions on Facebook and Twitter and it’s just been cool to hear what people think and have to say. It feels like we’re making new friends.

FOG!:  What have been the challenges since you’ve launched?

LS: The time it takes to shoot/edit/produce photos and video for each product is a bit more time-consuming and challenging than originally planned. Although it’s a bit hard to keep up on that we think it’s one of the most important things we do. Showing off how beautiful some of the production and art on the products is, is really important to us.

FOG!: What has been your marketing plan?

LS: We have a marketing plan?

FOG!: Do you guys have a connection with Amazon (I noticed ACME Library came in an Amazon Box)?

LS: Our connection to Amazon is that we use them as our fulfillment house. We send all of our products to them so they can individually pack and ship all of the orders that come in.

FOG!: You launced with All-Star Superman, right? Why that choice in particular?

LS: For a couple of reasons. It's clearly a brilliant book and we can't really think of another self-contained Superman story that's as good as this was. Another part of it was nostalgia/homage kind of thing. To launch our startup with the superhero that 's the godfather to modern comics just seemed like the right thing to do.


FOG!:  How do you see the concept of Thwipster developing?

LS: We’ve got a roadmap and vision laid out for Thwipster but we’re going to keep it to ourselves. We want to keep people excited as Thwipster grows and expands. We also change our mind on things and the last thing we want to do is say one thing and do the other. A side note: We’ve already done this and it’s not something we want to do again anytime soon. We launched with the idea of 5 daily deals a week and then changed it the first week to 7 daily deals, and yesterday we changed it back to 5 daily deals. Confusing right?

LS: We want to thank everybody that’s tweeted, liked, commented, forwarded or bought anything from us in the last two and a half weeks since we launched. It’s been as spectacular as Spider-Man.

Besides that: A video we made explaining the service:

and a post we made on Friday explaining the state of Thwipster and what’s coming on our blog, The Daring Chunk.

Didn’t I just say we wouldn’t reveal anything and we would keep it to ourselves? Backtracking...

You can watch all of Thwipster's Videos here.

And, of course, you can visit their site by clicking here.