Letting the Devil In: Nicholas Burman reviews THE PURITAN’S WIFE by Liam Cobb 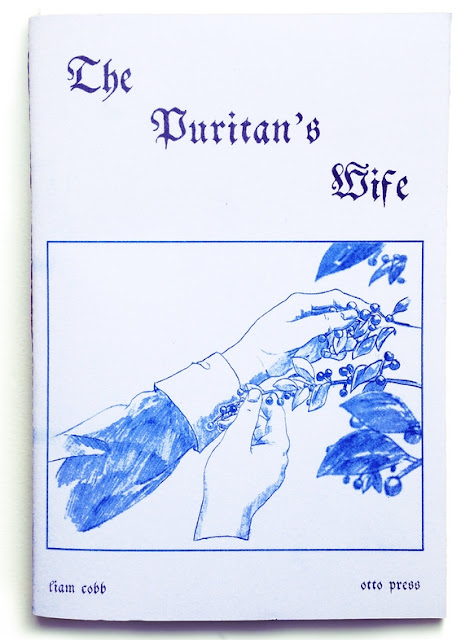 The Puritan’s Wife is something of a thematic and stylistic variation of what one might expect from its author. Liam Cobb is an artist usually associated with pastel shades and surreal modernist settings. In previous works, such as The Fever Closing and The Inspector (previously reviewed on YCE by Ryan Carey), he has taken great pleasure in re-contextualizing recognizable figures such as Bibendum and Mayor McCheese, while taking a sideways glance at contemporary issues. Perhaps unsurprisingly, given its title, The Puritan's Wife is neither warm nor modern. Cobb has put together a tale that encapsulates many of the stereotypes of 17th century New England settlements and settlers, with the obligatory miasma of witchcraft thrown in for good measure.
The opening page is a clear indication of the tone of the rest of the work. The reader is positioned looking up from six feet under; our view is eventually obscured by earth shoveled on top of us. It’s a claustrophobia-forming introduction. The comic remains silent for nearly six more pages, encouraging the reader to focus their energies on the mourners and the austere commune they live in (itself framed by a forest). While the characters may be physically positioned in the great expanse which is, to them, the New World, that sense of claustrophobia from the first page is echoed with a repetitive and precise six-panel layout which dominates much of the book. 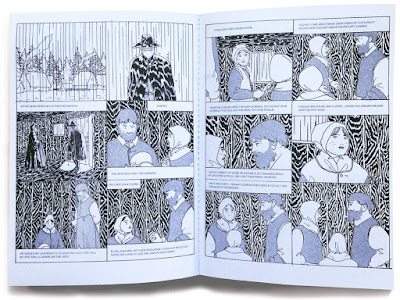 In The Puritan’s Wife, events take place in an isolated community led by John Cotton, the patriarch of this particular flock. The aforementioned funeral was for a child, one of a handful of the God-fearing community’s young who have passed away recently due to illness. From here on in the reader becomes embroiled in a family drama set in the context of a small-minded cult, in which subsequent deaths make members of the commune suspicious that black magic is at play. It all concludes in a suitably dramatic and somewhat biblical manner. Cobb keeps the plot moving along with enough pace and narrative precision to keep you involved, even as you develop pessimistic premonitions of what’s ahead.
The story itself isn’t wholly original, but that is part of the appeal of such a tale. Puritan Horror is a subgenre with certain conventions and themes. In a review of M. Night Shyamalan 2004’s film The Village, critic Will Self wrote that “the US owes its character to [...] schismatics - whether Puritans, Amish or Mormons, heading off into the wilderness so that they can live according to their conception of the good, free from the corrupting influences of the parent society.” The dramatization and exploitation of these historical scenarios lay at the heart of Puritan Horror, and The Puritan's Wife is a great example of the category. Consequently, fans of The Crucible or The VVitch will find plenty to enjoy here. And thankfully, the ending, as well as further details about the commune itself, is just ambiguous enough to lend the work an identity which doesn’t feel totally copycat.
A benefit of genre is that spectators are not expecting to be surprised by the plot (in broad terms, we often know what’s coming), but can instead take pleasure in the style and execution of the work. With his more common dayglo environments on pause for this volume, Cobb seems interested in ensuring that the various textures of his tools are on display in this grayscale work. In terms of style, The Puritan’s Wife seems to be Cobb returning to his self-published 2016 work Green Graves. Pencil and crayon marks are left to represent the dust and dirt of the New England landscape. 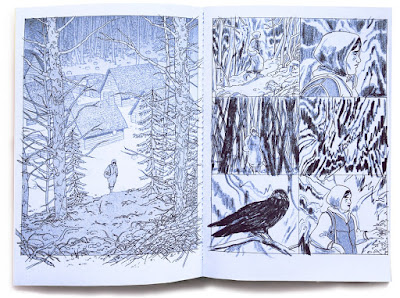 As Ellen, a key protagonist and maligned member of the commune, walks into the woods, frenetic oiled chalk marks represent her impressions of the shrubs and underbrush. The sense that the commune’s surrounding ecosystem can be flattened into abstraction reoccurs in the comic’s final moments. These flashes of distortion reinforce the notion that this is a world dictated by subjects whose perspectives sometimes wildly differ from typical representations. These representations of nature are reminiscent of van Gogh’s Tree Roots, in which personal, psychological troubles collide with obscure, natural patterns; both ended up representing the other.
Background details are sparse. Thanks to the modesty of the lives of the inhabitants, there isn’t much to show. Cobb adopts gradients to create a soft binary between above and below. The use of halftone repeatedly creates a distinction between the dark “up there” and the bright “down here” in many panels. This isn’t only appropriate period detail, as the only source of light is from candles and torches, it also creates an ominous atmosphere befitting the plot.
Aside from one splash page and a handful of oversized panels, the page layouts remain in a two by six formula throughout. Within this regimental structure, small motions and hesitant expressions take center stage. This is a story which mostly occurs at the level of intimate gestures in tight, domestic spaces, and The Puritan's Wife beautifully showcases Cobb’s gift of being able to draw a story that relies on non-verbal, interpersonal actions. While being so minimalist with its deployment of typically “action” set pieces, The Puritan's Wife would be best described as an action book, albeit actions of the minutest type. 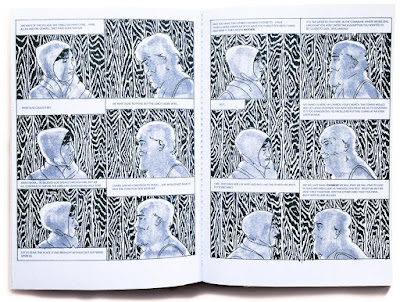 As many of the face-to-face encounters take place indoors, the characters are often surrounded by bare, wood walls. Rather than ensure through digital processes that the patterns of these backgrounds are coherent for each repeated shot, Cobb has instead allowed his free-flowing hand to imagine these patterns anew each time. This gives the somewhat magical realist impression that the characters’ surroundings are in constant flux and that there is a slippery, psychedelic quality to the commune. This also ties in nicely with the impressionistic flourish to the representation of nature and the forest discussed above. It seems that no matter how much the religious mind attempts to give order to the world, the messiness of nature will, much like the devil, enter the home and bring chaos with it regardless.
The Puritan's Wife is published by the UK’s Otto Press, a quality outlet for a range of artists and experiments based in London. Imperfections in the booklet, such as the fact that the width of each sheet doesn’t quite match, and that art regularly bleeds into the margins and over gutters, seem purposeful. They’re nice aesthetic touches for a work that thankfully largely avoids overbearing and distracting design quirks such as a “ye olde Englishe” font.
Cobb has made his name by sampling cultural icons and reappropriating classic storylines (his long-form work The Prince was a reappraisal of the Frog Prince fairytale). In his imagining of Cotton’s commune, Cobb encapsulates society’s ideas of the isolated and superstitious community, in which the hatred of women is never far from materializing and escape seems impossible, thanks to the mental prison bars as much as any physical barriers. In the exterior scenes, it is clear the characters are never far from the impenetrable silhouette of the trees, and you imagine this acting as an invisible wall. The final sequence suggests that the outside world will swallow you whole, that nature will overwhelm you. The reader is left wondering just how long the community can last before the roots and the whims of the wider world will overcome it, too.
----------------------------------------------------