Taking Maturity Into Your Own Hands: Fred McNamara Reviews VISITING by Alivia Horsley 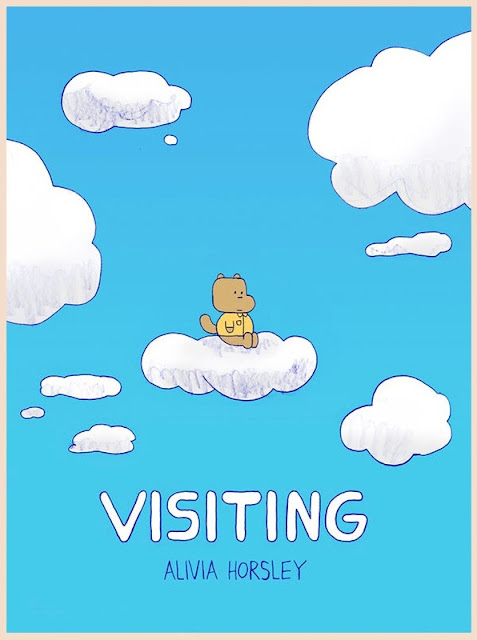 The sparse nature of Alivia Horsley’s Visiting lies somewhere between relaxed and tense. The laid-back and seemingly inconsequential holiday of the protagonist, Dylan, who is visiting his grandparents, is riddled with a soft sense of unease as he continuously avoids having to ask them an important question dictated by his mother. Visiting touches upon themes of domestic unrest and of families making decisions on behalf of others in an attempt to better them, Horsley channels these complex, arresting themes through trimmed, succinct visuals and story-telling. However, that trimmed style serves as Visting’s weakest flaw. Such is the delicacy in Horsley’s execution of the comic’s story, it’s constantly in danger of buckling under the weight of its dense themes.

Visiting’s visuals lend weight to its subtle emotions. Horsley gives Visiting a sparse appearance, using thinly drawn details and panels, sometimes eschewing panels completely. This open space allows for reflective, meditative moods to sink in. Often, the characters themselves are the only things filling up the page space, their wordless expressions emitting the beats of the story. It’s often a quiet comic, with many pages featuring minimal or no dialogue. One wonders if Visiting would be a more robust read if there was greater detailing to the characters themselves since their body language and facial expressions become almost the sole method of carrying the narrative. 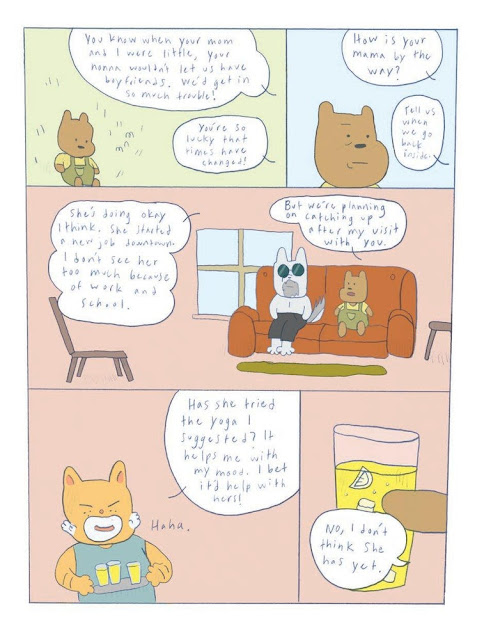 Still, Horsley manages to give Visiting a cohesiveness by enhancing everything with the same minimal detail, but given the comic’s mature emotions, they’re left suspended in mid-air in the comic’s open space thanks to the faintly-sketched characters. Horsley injects just the right amount of detail into the characters to carry the story along, but the general sparseness adds to the overall tension scattered throughout the comic. Dialogue and emotions aren’t masked in any form, they’re left out in the open for all to see. If there was less empty space throughout the comic, those emotions might have registered with a leaner and more immediate impact.

The flipside of all of this is that Visiting’s charming appearance allows its straight-faced ideas to be wrapped in a sweetly digestible casing. While Horsley's artwork is limiting, it gives Visiting an intimate, urban charm. Equally charming is Dylan himself, whose struggles make him a character easy to empathize with. He’s caught in a pointless crossfire between two clashing generational perspectives. His grandparents are content to live out their twilight years as leisurely as possible, reflecting their elderly state. 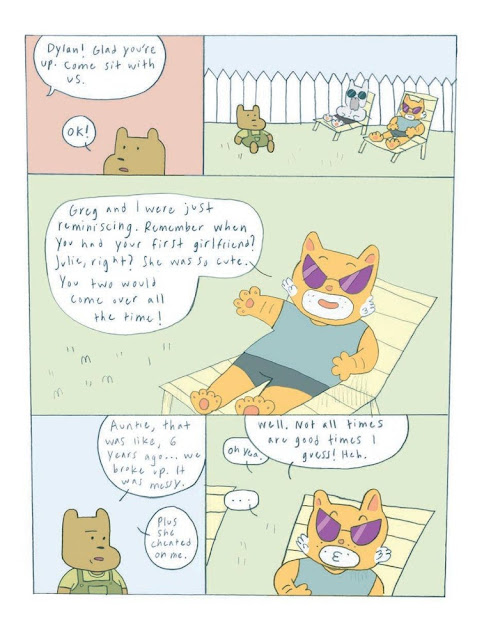 Conversely, his mother radiates a different attitude. Despite not making a single appearance in the comic itself, Horsley effortlessly crafts a distinct personality from the mother via the barrage of harassing texts she sends to Dylan. Horsley paints Dylan’s mother as someone seemingly with the world on her shoulders, forced to care for both her son and her own parents. It’s a testament to Horsley's narrative skills how she’s able to craft this persona for the mother solely through text messages. The unnecessary burden the mother places upon her son feel like a natural extension of her world-weariness, whilst the self-inflicted drawing-out of Dylan’s aversion in asking his grandparents to move in with himself and his mother is heartfelt.

Horsley is slight in depicting Dylan’s moods throughout the comic. Though they are skeletal, they work. Whether it’s an upturned eyebrow, a bead of sweat, or a wrinkled frown, she effortlessly conjures forth Dylan’s conflicting emotions. He’s the most fully realized character of the comic. His unseen yet ever-texting mother and his relaxed, oblivious grandparents are miles apart from each other in their fleshed-out state compared to Dylan, yet their characteristics serve the story well.

Dylan’s own miniature arc in taking the decision about his grandparent’s potential move into his own hands is another element of Visiting that bears its warm, well-paced flow. His eventual choice in deciding how to handle the situation results in him being fashioned into a link between his mother and grandparents, while also elevating his maturity. This is where the mostly sparse narrative is at its strongest, as Dylan sees how happy his grandparents are with their current lifestyle. His desire to not disrupt their happiness cements his own maturity and resilience against his otherwise stern mother. Even with that resilience in mind, it balances out the equilibrium within the family itself. Dylan’s act of selflessness relieves some of his mother’s self-inflicted burden, resulting in Horsley writing a happy ending for all concerned, not just the grandparents. 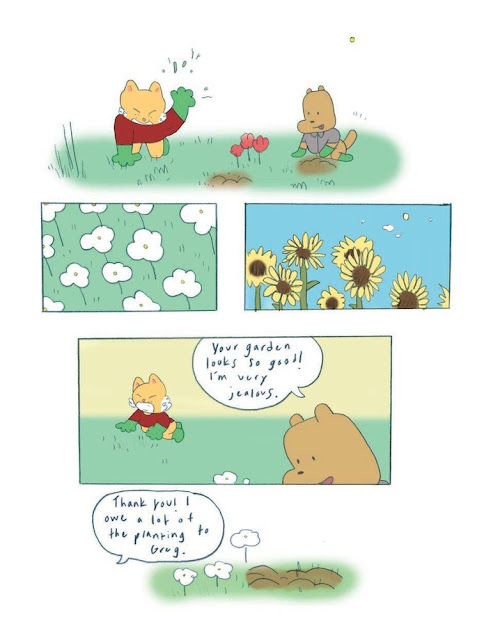 Horsley creates a natural of growth to Dylan that locks in the emotional weight of the comic. She clearly makes no secret about investing the most into Dylan, and the care and attention she applies to the character are heartwarming to see. He’s clearly the youngest character in the story, and ultimately makes the most mature and sensible decision in improving his extended family’s welfare.

Likewise, the story itself has a pleasant flow about it. The aforementioned sparseness may make the character’s emotions float rather than hit home, yet, at the same time, it gives the story room to stretch and stroll along at its unhurried pace. This is one of the comic’s greater strengths, as nothing about Visiting feeling rushed or forced. As well, the anthropomorphism of the characters gives the story’s tone a welcome touch of light-hearted humor that adds to the overall delicate nature of the comic. That delicacy makes Visiting all the more charming to read, cushioning the comic’s taught, mature themes.

Visiting is a comic that leaves the reader wanting more, in every possible sense. It doesn’t have any problems telling its story, but it’s how the story is visually presented that makes the comic feel lacking in substance. It skeletal appearance is lacking against its mature narrative, yet the colors and shapes of its appearance remain adoringly intoxicating.

It’s innocent tone and the arc of growth for Dylan ultimately save the comic, making it a sweetly natured read that tugs at the heart. Adding to this, Horsley’s depiction of the characters as anthropomorphic animals adds a sprinkling of surface-level cuteness to an otherwise gut-wrenching situation forced upon Dylan. His actions throughout the comic make him a well-rounded protagonist to carry the comic’s story. His awkwardness around his grandparents and hesitations in answering his mother’s texts make him a naturally flawed individual, yet he eventually resolves the problem before him in a simple manner that pleases everyone. This all helps to give the story itself a clear and definite beginning, middle, and end. Visiting doesn’t have all the tools at its disposal to be the comic it wants to be, yet it makes an honest, endearing effort to be exactly what it is.