Living in the Moment when the Moment is the Problem: Matt Vadnais on NOVELTY by Mohar Kalra 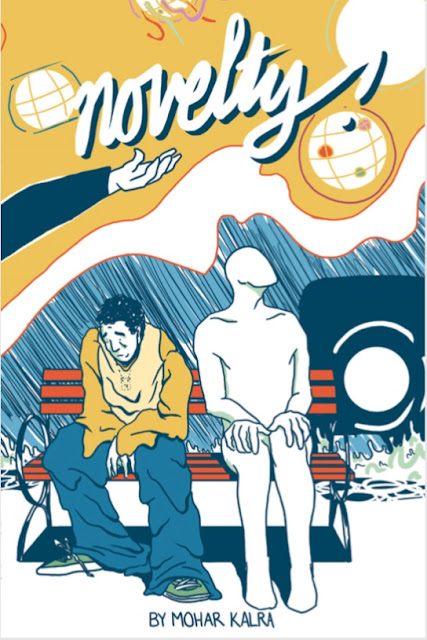 The cover of Mohar Kalra’s Novelty looks like poster art from a World’s Fair or state tourism campaign. Replete with spheres that look like unified and peaceful planets, the image appears to be selling unity and joy. The word “novelty!” – written in a buoyant and futuristic font deserving of “Sunny California” or “Cities of Tomorrow!” – erupts from a mustard yellow and suggests that readers will find some kind of innovation inside the pages of the book. The stylized and stylish design elements of the cover mask, at least for a moment, the much more serious image that they frame. Two figures share a bench in the rain. One man is bedraggled and haggard in an ill-fitting coat; the other is a featureless, white humanoid with terrific posture.

Taken as a whole, the cover suggests that this is a story about the remarkable invention of an unlikely friendship. Such an assertion isn’t far from what happens in the comic; however, unless one knows what to look for, the cover does little to communicate to the reader that both figures sharing the bench are aspects of the same person, an undergraduate named Allen who spends the book navigating a mental health odyssey initiated by having been cut loose from college counseling services because of budget cuts. In the hands of someone else, the cover might feel like false advertising or a trick of Tyler Durden-sized proportions. However, Kalra treats both figures – figures that correlate loosely but hardly exactly with mania and depression – with such respect and gratitude that a reader is invited to trust the visual metaphor. While Allen himself spends a lot less time on the page than either of these voices or personas or aspects of his personality – Kalra doesn’t spoon-feed readers the antecedents of the metaphor – both are rendered as real. Neither is a demon to banish nor a voice to silence.

For me, at least, the result is one of the most affecting depictions of mental health that I’ve encountered. Too often, art interested in negotiating a crisis of depression, mania, or anxiety ends up suggesting that such things can be tamed or defeated, the way an adversary might be thwarted in a cape comic. Sure, Kalra’s simple but ambitious line work draws from the superhero genre, particularly in the Silver Surfer-esque stature of Allen’s bolder companion, as well as in the way that his weather-beaten friend begins to melt and blob in the face of complication. However, such choices allow Kalra to depict Allen’s mental health as a power set, suggesting that the purpose of therapy is not to treat weakness but to negotiate the complications created by one’s strengths. 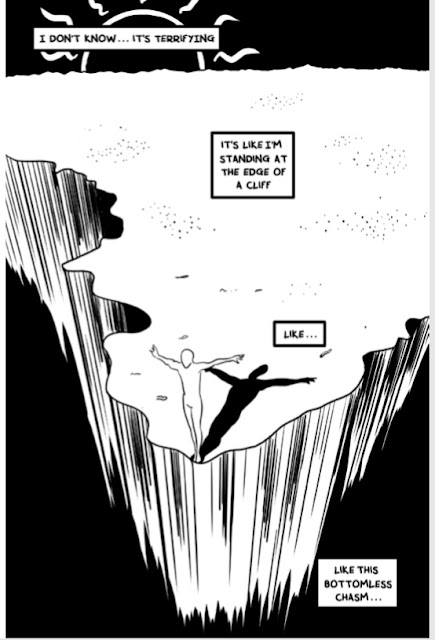 The comic opens with the bold, featureless version of Allen standing at the edge of a cliff. Kalra explains the narration as things Allen is saying to the therapist, just before being left to his own devices. Allen explains that falling is much less upsetting than the notion that he might be caught by a safety net before impact. By conflating self-harm with a kind of freedom, and by re-thinking a reprieve from death as the true object of fear, this short fantasy sequence effectively draws this particular iconographic depiction of Allen as impulsive and bold but hardly happy. Throughout Novelty, this embodiment of Allen, this alter ego, has big, important thoughts, announces himself as a kind of aesthete, and serves as a tour guide for some of the most visually poetic sequences of Kalra’s art, usually rendered in take-you-by-surprise, two-page spreads that are legitimately staggering. Though Kalra suggests that this alter ego has existed long before the therapist’s office, this featureless version of Allen can be understood as a creation of Allen’s psyche that allows Allen to do exactly what his therapist told him to do: live in the moment. This version of Allen appears to have the ability to literally sink into images, to speak directly to the audience, and to engage with ideas regardless of social convention or anxieties. He can go where Allen cannot.

Kalra draws attention to the abilities of this featureless void by paring them with another alter ego, Allen’s shabbily dressed counterpart who is much less eloquent: mostly, he says “fuck” multiple times in the same panel while attempting, desperately, to melt and disappear from any moment he is in. The characterization of one aspect of Allen informs the other so that this downtrodden, blobby manifestation does not come off as ill-defined or oversimplified but as someone having an earned reaction every time he cusses or begins to melt. In other words, Kalra manages the neat trick where, because of Allen’s particular cocktail of invasive thoughts, his less equipped avatar constantly has to cash the checks written by aspects of himself so preoccupied with the beautiful chaos of the world that they have little time to consider the consequences. For example, the featureless alter ego stands motionless as he watches a white man chase a black child into traffic in order to observe what will happen because it seems interesting; this decision will torment Allen for several pages. Kalra depicts this memory as a painting in an art gallery that serves as a proxy for Allen’s mind; even the memory is something that the featureless thinker can marvel at, hand on his chin, while the other Allen is tormented on the opposite page. 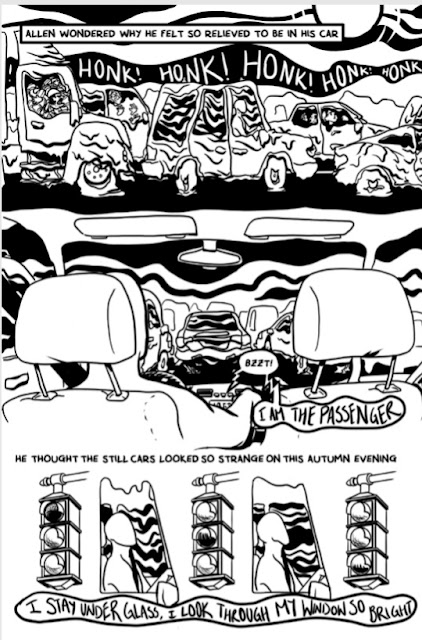 This is not the only scene that features Kalra melding images of Allen – any version of Allen – into other kinds of imagery. Cinema, photography, fine art, and the poster design of the cover are all used to suggest dissociation. I was reminded of a question in the survey I needed to fill out before receiving a single therapy session as an undergraduate – does your life feel like a movie? – only to discover, like Allen, that my very real concerns weren’t serious enough to warrant an ongoing relationship with student services. Like myself and dozens of similar students I have encountered as a professor, Allen is given little option but to try to find his way to follow the advice generated in this single session, advice that is little more than a cliché.

Thanks to Kalra’s brilliant art, the reader comes to understand that this advice itself is complicated for Allen; throughout Novelty, he sinks too deeply into individual moments, so much so that he ceases to look like Allen or exist in an image that looks like his “real” world. Throughout the comic, Kalra provides narration that sometimes belongs to one of Allen’s alter-egos and sometimes floats above the action as a disembodied third person; Allen, until the very end, is not able to provide words to describe or frame his own story. By showing the complicated distinctions between living in, being fearful of, and being distracted by “the moment,” Kalra quietly comments on how fully dissociation is misunderstood as disinterest and again complicates the idea that mental illness is somehow about weakness. While a reader might be tempted to understand the over-confident, solipsistic void-like alter ego as a coping mechanism designed to offset the anxiety embodied by Allen’s melting and blobby alter ego, it’s just as possible to understand the relationship as inverted: Kalra presents Allen’s weakest self as a coping mechanism, making this especially clear in a moment where the shabbily dressed avatar physically supports the exhausted and overwhelmed alter ego. It is this moment that leads Allen to emerge as Allen when he asked to take a picture of two people. 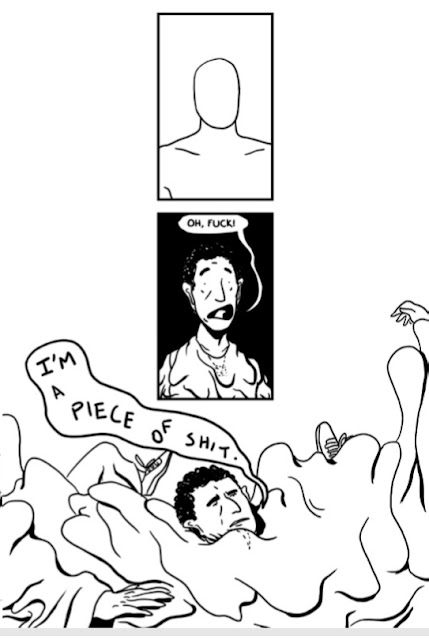 On the one hand, the fact that Allen is able to find some kind of momentary unification and genuine happiness at the comic’s end might suggest that he is fully capable of negotiating his mental health without professional help or that the counselor’s assessment of his crisis was accurate. However, at least for this reader, the genius of Novelty is that, though the moment of peace is presented as a kind of breakthrough or novelty, the book reads as an origin story. Kalra hasn’t written a story about Allen coming to any kind of destination, so much as he has outlined the ways in which – and the reasons why – Allen will be the beleaguered and unwise hero of his own story from here on. The moment is new and it is, as Allen tells the reader in the only moment where he speaks as his own narrator, good enough; his fearful self has powers too, able to comfort and focus the part of him that is so interested in the moment that he’s willing to relinquish himself to it. 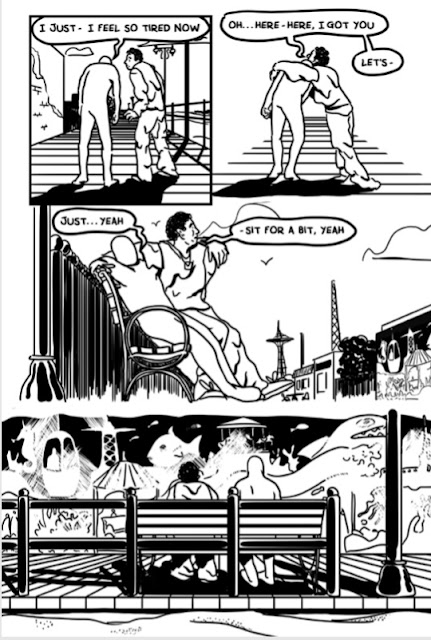 Still, this moment is only a moment. And even this moment is presented with a helping of dissociation, rendered as yet another photographic representation of living that Allen is literally sucked into, complete with a shark and an octopus. As such, Novelty is truly a novelty, the rare piece of art about mental health that does not pretend that the peace one might find with one’s self has to be any more lasting than the moments of chaos that come before it in order to be real and meaningful.