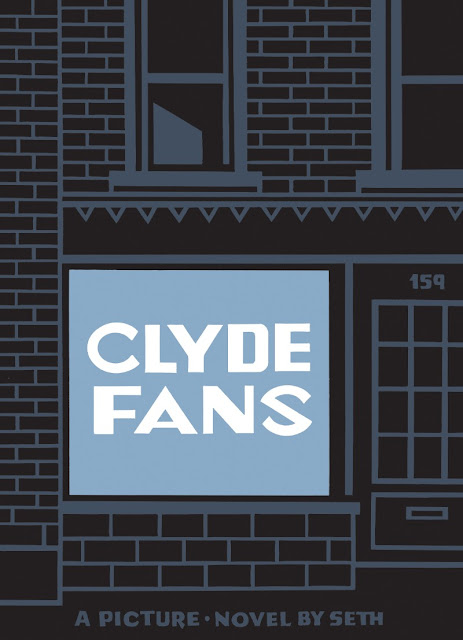 Clyde Fans begins like a piece of drone music. For almost 100 pages, Abe Matchcard talks to the reader about salesmanship while he goes about his daily routine. Rising from the bed, putting in his dentures, making breakfast, drinking coffee, going up and down the stairs, arranging furniture, etc. Not a detail is spared. Every action is broken down to its tiniest possible fracture until time slows down to a crawl. It’s a dull read, intentionally so. It seemingly tries to break down the reader’s awareness of temporality as if to prepare him for what is coming; the first chapter is the crucible, if you’ve made it through you are possibly strong enough to withstand the pressures of time travel.

Time seems to be the leading function throughout this “picture novel” (the fact that it is called that instead of a “graphic novel” is actually important to the narrative). On the diegetic level, we spend the length of the book skipping from one period to another – traveling across the 20th century as the Clyde Fans company’s fortunes rise and fall. The two protagonists, brothers Abe and Simon, are meant to represent two differing relations to the concept of time in society. Yet for all their philosophical differences the brothers are just two sides of the same coin. The main issue of Clyde Fans is that is unable to see beyond its protagonists, these well-off middle-aged, white men, and how the issues it deals with affect society as a whole. Seth would like to see these two brothers as a microcosm of existence without understanding the relative privilege of their conditions. 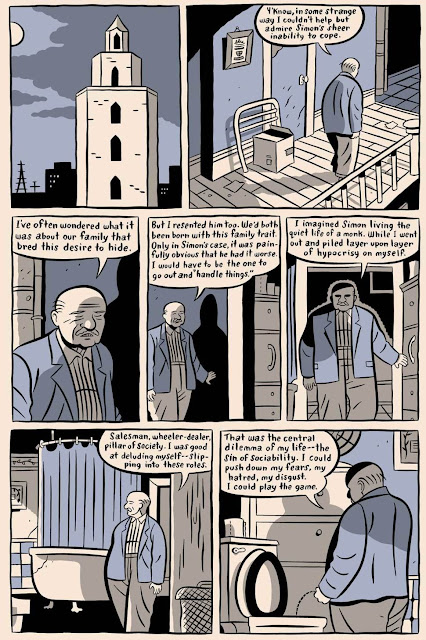 Abe is the salesman, who thinks of time as money and hates to see it wasted. He is the march of the future, the growth of industry, and, unbeknownst even to himself, he also represents the company’s demise. It grows and grows until it is no longer able to sustain itself and falls apart. I don’t know if Seth was aiming to illustrate maxims of communist ideology, but this is exactly what he did here. Time becomes industry, the capital, something that is not allowed to be wasted.

Simon is the dreamer, for him time is something to ponder rather than use. When he goes on his first and only sales trip, the reader sees him wasting time, constantly. Whenever he tries to sell something, he freezes. Which means he stops making money. Over and over again, he becomes just like the old postcards he so loves to collect – stuck in time while the world of sales and money rolls on by. Throughout the trip, Simon lives in terrible fear of the telephone, the machine that will connect him to his brother and force him to reveal the terrible truth about is wasteful behavior. 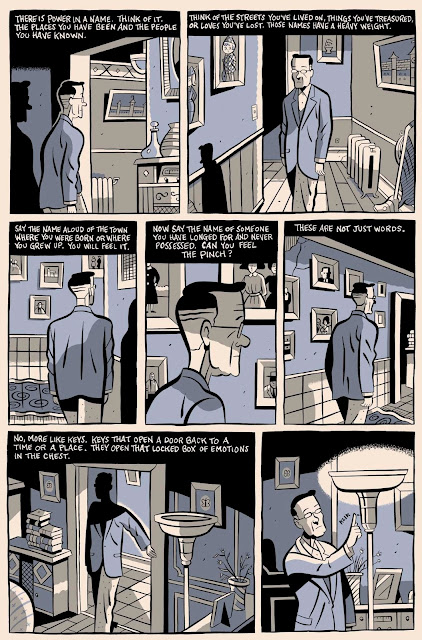 As Philosopher and Marxist activist Rosa Luxemburg wrote, “It is an immanent law of the capitalist method of production that it strives to materially bind together the most distant places […] and eventually transform the entire world into one firmly joined productive mechanism.” Simon is hunted by the phone, the specter of capitalism which connects him to the office of his brother. No matter how far away he travels, the new, modernized world will not allow him to escape.

Simon fears the future. The reader sees him growing quickly attached to any piece of memorabilia coming his way; he ends up spending his life alongside physical tokens, one of which is his ailing mother. His mother, suffering from some degenerative illness, is hardly able to create new memories herself and constantly lives in the past when Simon was just a boy. Though he makes a great show of anger when his brother comes to take her away to a home, always away on business and never visiting her before, Simon is actually as dependent on his mother as she is on him. He doesn’t want her taken away for selfish reasons, because she is another link in his chain of memories. 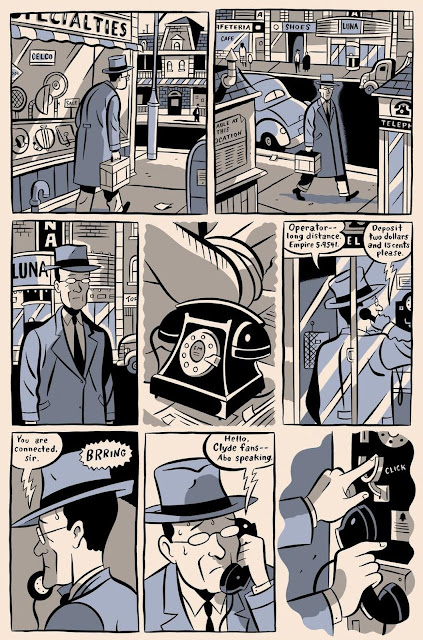 In one of the most telling monologues in the book, Simon explains his obsession for postcards and what they represent:


I recall, as a young man, trying to “fix” myself in a moment in time. Walking down a street I would concentrate and think. “I am now in this moment. This is me. In five minutes I will be passing the tea-shop and I will have travelled forward in time. Then, moments later, when I did pass the tea shop, I would mentally return to that “fixed” moment and try to connect to the person I had been then."

Simon, in many ways an avatar of the author, wishes to hold back progress. Like the protagonists of Edward Abbey’s The Monkey Wrench Gang, he wants to put a rod through the wheel of industry before it flattens him entirely. Unlike these protagonists, however, Simon cannot summon his will to act. Instead, he becomes a prisoner in a cage he has made. He allows his brother to roll over him (only to be rolled over in turn by the future). Clyde Fans is a picture novel because it is literally a novel about relating to pictures, about our idea of a golden age and our unwillingness to let go. This is the story of weak men.

The protagonists of The Monkey Wrench Gang acted out of concern for the world as a whole, their philosophy guiding their actions. The protagonists of Clyde Fans are guided by middle-age ennui, leading to inaction. There is no need for the book to become an activist manifesto; however, there seems to be a lack of ability to contextualize the issues of the characters in the larger scheme of things: this is a book about the problems of capitalism and industrialization in which the most concerning issues are the emotional hang-ups of upper-middle-class white men. The striking employees that force Abe to close down the factory are barely in the story. The scenes with the striking employees are all about his pain, his tragedy.  Seth has all the time in the world for the brothers and almost none for anyone else. 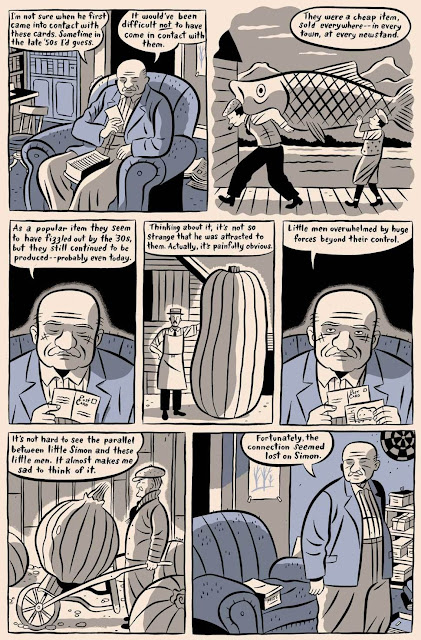 The other dimension of time that inhabits Clyde Fans is the extradiegetic one. Famously, Seth took over 20 years to complete Clyde Fans, standing in opposition to the mainstream comic-book industry where artists are often treated like cogs in an industrial machine and expected to produce art in a timely manner. The long-winded process is, therefore, a part of the legend of this picture novel, another proof of its greatness. It rejects industrialized time and becomes art. But being able to reject industrialized time is, by itself, a privilege.

In a review of a different time-prohibitive work by a highly regarded artists, Art Spiegelman's In The Shadow of No Towers, scholar Julian Darius notes how, in the high echelons of the art-world, extended time is seen as mark of quality: “here we see the familiar elitist notion that rapid artistic production is always and automatically shoddy artistic production[...] In elite circles, real art must take time, and the more time the better.” In Clyde Fans, Simon, in several ways an avatar of the author, rejects capitalism, yet we do not see him homeless or desolate; if his house is shabby-looking, it is because he wants it to be. He can afford not to work. 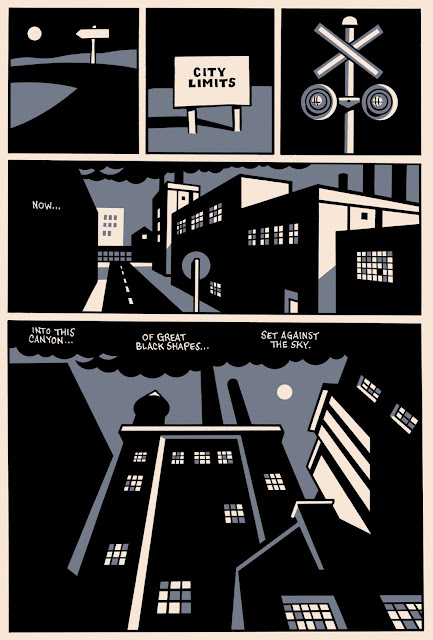 In a quote on the back of the slipcase of the book, writer and critic Douglas Coupland claims that “Clyde Fans is a masterpiece of storytelling that reinvents the medium as it goes along.” There is nothing here, factually, that reinvents the medium, though. It is a well-made piece of comics, almost exceedingly so. Seth has always been a fine artist and designer and he shows all the skills he mastered throughout the years here, but, contrary to Coupland’s assertion, there is little that sets it apart from previous efforts by the author. There seems to be this expectation that mere investment of time that was allowed to Seth for this project would lead to greater artistic endeavor.

Ironically enough, for a creation engaged in a dialogue with the problems of industry, the fact that it took such a long time to create Clyde Fans quickly becomes a promotional tool, which is to say – another part of the machinery of publication. Time is money, it is the hottest commodity around.  But the other side of this idea is that time is privilege, very few artists could afford to spend twenty years on a single project. 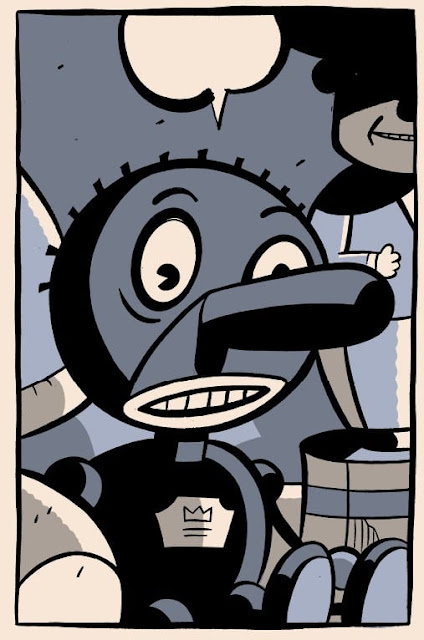 And for good or ill, Clyde Fans is dripping with privilege. Not that Seth is unaware of the fact: One of Solomon’s most treasured keepsakes, one that the book returns to over and over again, is a little racist doll, an exaggerated image of a black man. In an interview with The Comics Journal, Seth describes how it took him a long time to notice what, in fact, he had drawn: “[…] when I was working on the book, I missed an obvious point there, that Halloween toy is clearly a black racial figure.”  And while Seth is certainly aware of it now, it is hard to ignore how casually the book treats the appearance this little thing, as if the author never expected a black person to actually sit and read it. The work, as a whole, suffers from a rather limited vision of life - a narrow scope of human existence.

That is the grand problem at the heart of Clyde Fans. It is aware of issues, of the problems of capitalism and racism, but it cannot muster any passion to deal with them. Like the characters contained within its handsomely packaged pages, it is a tired story. To read it is to be weighed down by the years. For all the craft it has to offer, for all skill Seth shows in capturing space and time, for all the investment in its production values (and it is a very handsome package, a square hardback bounded within a cardboard slipcase, surely it was not cheap to make), and for all the time in the world, it still lacks one of the highest virtue of any work of art – passion.