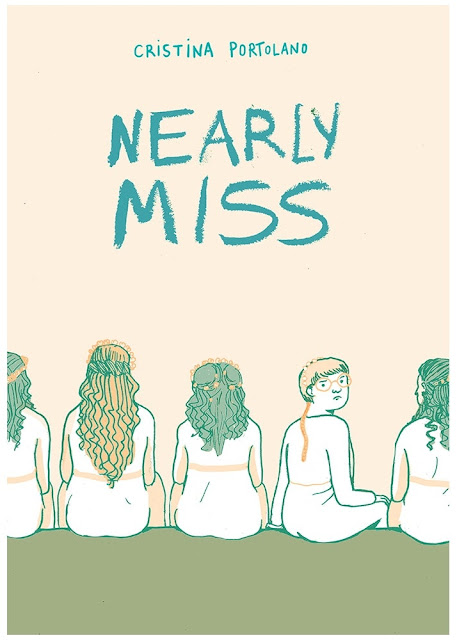 Cristina Portolano's Nearly Miss is an Italian second cousin to D.Boyd's Chicken Rising. Both are autobiographical stories about the pre-adolescence of girls who don’t fit in with the rest of society, particularly with regard to gender roles and expectations. Both feature parents (especially fathers) who don’t understand their daughters very well. Both feature young women with a talent and passion for drawing and limitless imaginations. But of the two, Portolano's book is more directly a first-person narrative that is at turns whimsical, silly, and brutally frank. It's also a story about how growing up in a place with a strong sense of culture creates an indelible mark on a person, for good and ill.

Portolano is hilariously blunt in documenting her eccentricities as a child, which she clung to despite the ways in which her environment often served to beat her down, including her love-hate relationship with her older brother. He acted as big brothers often do: dismissive of this adoring girl who wanted to be his shadow, but he was also highly influential in terms of comics, music, and brutal truth-telling. Much worse than her brother, though, was her experience in school, both at the hands of other kids and the nuns at her Catholic school.

On her first day of kindergarten, Portolano made herself a necklace, went out on the playground to make friends, and promptly got her ass kicked by a girl who wanted the necklace. It was a rude introduction to life outside her family bubble, a recurring theme in the book. When she told her brother, he first admonished her and then encouraged her to play a fighting video game to learn how to defend herself — and she won. It's a page of sheer cartooning joy, which speaks to Portolano's skill as a cartoonist. It's a 2 x 3 grid panel layout, only there are no grid lines. This creates an interesting tension because it feels light and airy in terms of layout, but a closer look reveals a tight structure. The color scheme in the book is done entirely in orange, dark green, blue-green and yellow, giving the book a sunny feel no matter what was happening. That lightness of color goes hand-in-hand with the open-page layout in establishing that upbeat, almost innocent tone. Here, the video game set-up dominates the first panel, bleeding over a bit into the rest of the page. This helpfully establishes the action, allowing the other five panels to focus directly on her brother and herself. In this scene, Portolano's expert use of body language and subtle facial expressions gets across the closeness between the siblings in a way that their conversation doesn't. 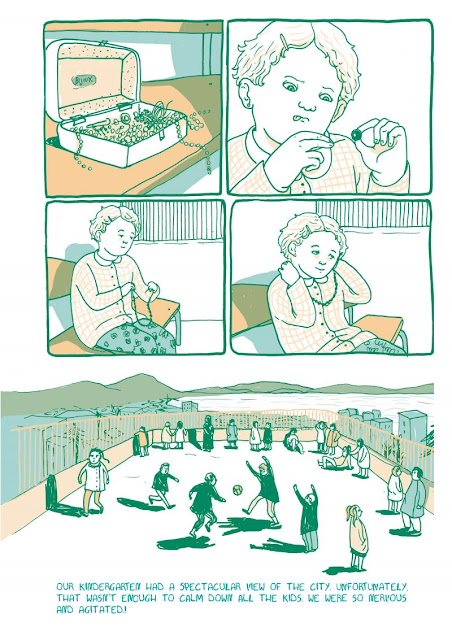 In Nearly Miss, Portolano's character has a natural curiosity about sex. There is a brutal early scene where she goes off with a young male classmate to show each other their genitals, only to be caught by a nun who spanks Portolano until she wets herself. Without having to spell it out further, it is incidents like this that sparked Portolano's life-long distrust of religion and authority in general. Like Boyd, it speaks to the way that casual cruelty perpetrated on the young, innocent, and impressionable always winds up having severe repercussions down the line. It can harden or deaden people and lead them to make bad choices.

Portolano grew up in Naples, and this ancient Italian city was an indelible part of her personality. In many ways, this comic is a love letter to the city, especially when she draws the old buildings and narrow streets that created a complex, enticing maze to navigate. At the same time, her family's own apartment is depicted as small and homey--even cramped. Portolano draws everything with a slightly shabby quality, as though every building is slowly decaying before her eyes. Still, the bright colors in the book counteract any sort of cynicism regarding her surroundings, creating a juxtaposition of an adult's understanding of how a city ages and a child's enthusiasm for seeing all of these things for the first time.

A running through-line in the book is the way a child gets swept up in the excitement of a local sports team doing well. Just after Portolano was born, the Naples football team won their first league championship, and her family was swept up in the mania. Portolano gets right at the heart of it — supporting the local team means that their success is the city's success and thus everyone's success. There's a funny sequence in Nearly Miss where the whole family is celebrating a goal and her mom accidentally knocks baby Portolano over while she is in her high chair. This leads to my favorite part of the book — Portolano's long, imaginary discussions with the club's superstar, infamous soccer legend Diego Maradona. Here, interestingly, she notes that "people always talked so much about him, I felt like he was part of the family." 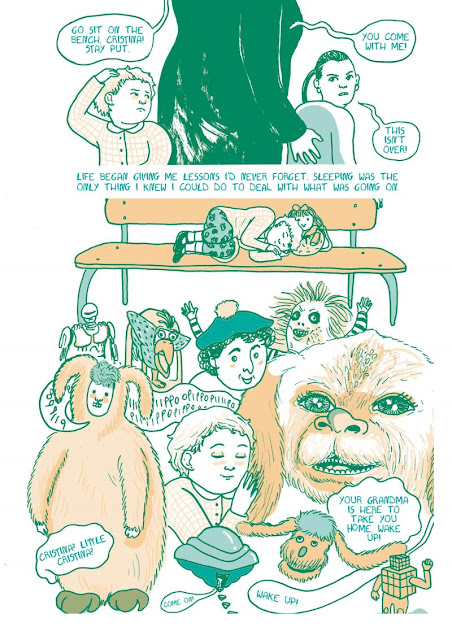 These sequences also form key transition points in the book. They also serve as a commentary about whatever trouble Maradona was getting into at the time. Portolano upbraids him for testing positive for drugs one time and then tells him that he needs to behave because she is trying to be better too. As Portolano struggles with her transition into adolescence, Maradona says goodbye but also tells her not to "let anyone have an influence on you. And don't be ashamed, whatever you want to do or be." It's one of many funny, affecting sequences in the book that doubled as marvelously positive self-talk.

As Portolano grew older, she was constantly being told that she had to shape up and be more ladylike, because she was "nearly a miss." That meant that she was almost a teen instead of a girl, and as a result, Portolano was dreading the advent of menarche. Being a miss meant dressing a certain way, acting a certain way, looking a certain way and having a body that changed in a way that brought unwanted attention. By the book's end, Portolano's rebellion against every expectation is fully-formed when menarche finally arrived. She is going to look and act exactly how she wants, but that strength (or as she notes, the strength she was pretending to possess) comes at a price. 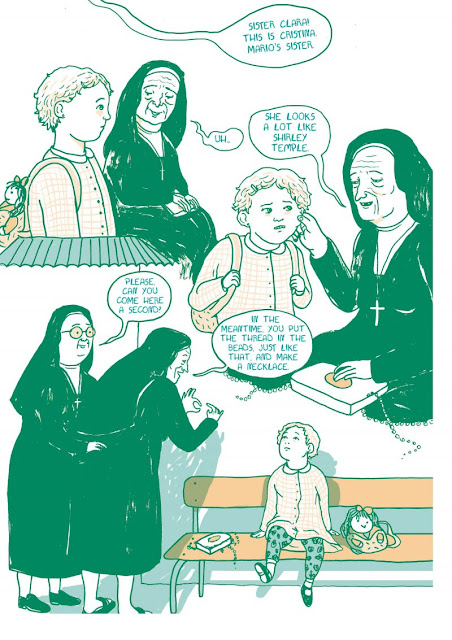 As funny as this book is, its creation was an act of mourning. Portolano says that she mourned not being a kid anymore at the very end of the book, and this book feels like a way of coming to terms with that grief. Portolano depicts her personality in this book as sweet and whimsical, but the only person who didn't have expectations of what she should be was her brother. He was often brusque and dismissive, but he also clearly loved her and wanted to make her life better. He didn't want her to be hurt, so he played the fighting game with her. He wanted her to have more freedom, so he taught her how to ride a bicycle. There are loving drawings of the two of them posed together in various Halloween costumes over the years that silently acknowledge the depth of their bond and how their conflicts made that bond stronger. Her brother didn't care about her being a good "miss"; he just wanted her to be the best version of who she was. He wanted her to know the truth about things (like her pet duck being taken to the butcher) instead of letting his parents keep her in the dark — even if it was hurtful. That strength and support helped Portolano find her own strength, and when he started to pull away from the family, she listened to his records and read his comics and was educated anew.

Nearly Miss is ultimately a book about finding ways to bear inevitable burdens while mapping out one's own identity and destiny. It maps out scenes of joy and discovery as well as pain and cruelty. It's about understanding that grief extends not just to sad events, but also to happy memories of a time that is no longer available or memorable. It's drawn in a manner that emphasizes the sunny, vivid quality of childhood memories that overlap with moments of pain. It's a book that balances an expressive use of line and color with rock-solid storytelling fundamentals. It's a powerful debut for a highly skilled cartoonist whose quirky sense of humor and understanding of her own inner weirdness is on full display.