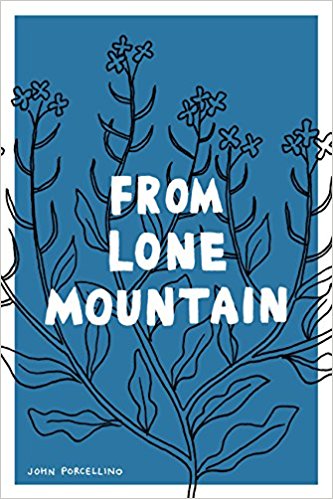 John Porcellino’s latest collection of autobiographical King-Cat zines, From Lone Mountain (Drawn and Quarterly), finds the artist at the absolute peak of his drawing and storytelling capabilities, while at the same time secretly still battling his debilitating Obsessive-Compulsive Disorder (OCD). The book collects issues #62-68 of King-Cat Comics and Stories, as well as a few unpublished stories and some out of print minis that he did for show. It’s only in recent years (in the notes to his last collection, Map Of My Heart, as well as in his more straightforward book The Hospital Suite) that he’s opened up about this time, although an attentive reader could start to see it bleed through his stories as the book goes on. The stories in Map Of My Heart were about Porcellino's sense of home and rootedness even in the face of divorce and loneliness. In contrast, From Lone Mountain is about how unmoored and isolated he felt when he moved to San Francisco with his then-wife Misun.

In the book's endnotes, Porcellino said that his OCD eased for a while, being in a new environment, and that came through in the freshness of issues #62 and #63, as Porcellino tackled adaptations of Zen stories with relish and wrote a number of stories featuring Misun as a kind of comedic partner. He also drew a number of stories in the vein of comics-as-poetry, also often in the Zen tradition, as a way of expressing his focus on the Now. An example of this is “Trombone No. 1” (with a sub-header telling the reader to “please read slowly”), a silent story of Porcellino going about his day at work, eating lunch, and then picking up a box of paperclips with the title of the story on them. Each panel features Porcellino being entirely in each moment and the story asks the reader to try to do the same, up until and including the little moment of absurdity with the box of paper clips. 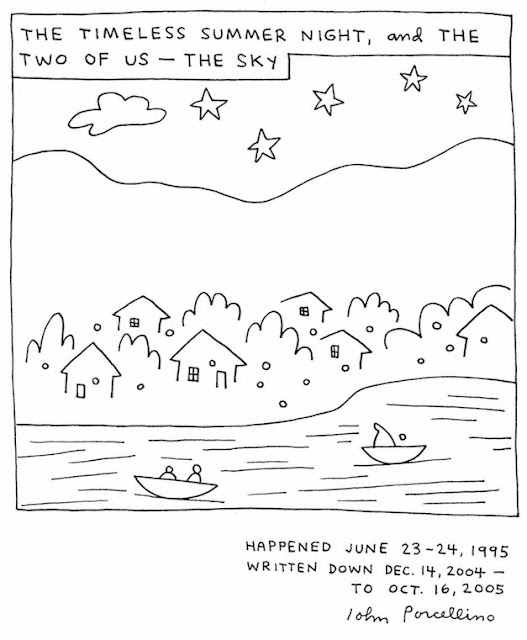 Porcellino has always done comics about being out in nature, and this book has plenty of examples, but the tone of these stories is different from those he used to write about being in his native stamping grounds in Illinois. There’s a greater sense of distance and awe of the unfamiliar (as opposed to the more grounding awe of the familiar) in some of these stories, like “Great Western Sky”, which doesn’t feature people at all, but rather views of the American Southwest. That’s a part of the country that has inspired artists and cartoonists in particular for a long time, with George Herriman being a prominent example. Herriman's classic Krazy Kat strip was well known for featuring red sands, mesas, and other spectacular views unique to the area.

In addition to a time of transition in terms of location, the period featured in From Lone Mountain was one of tragedy for Porcellino as well, which only added to the sense of him feeling unsettled in San Francisco. Issue #64 is a beautiful tribute to his father, Chuck, who died before John and Misun could speed west to say good-bye. There are funny prose stories about his dad and more wistful anecdotes about where he was when he learned of his dad’s death, leaving home, and a desperate desire to go home. There’s also a mix of joy and grief to be found here, like in “April 7th—Western Illinois”, where his dad’s favorite song (absurdly, “Renegade” by Styx--although the line "I'm so far from my home" does resonate) came on the radio just as they crossed over into the state on their long journey. Other issues noted the deaths of close friends, acquaintances, and then even his beloved cat, Maisie Kukoc, who had been a staple in King-Cat stories since nearly the beginning. 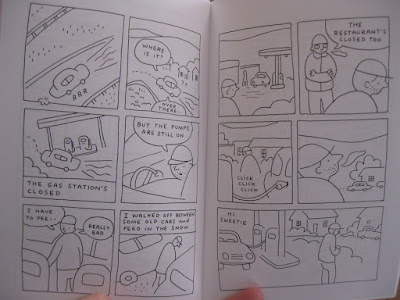 One of the paradoxes of the collection that Porcellino described is how painful it became to be creative, caught in the grip of OCD. He found himself drawing and redrawing pages dozens of times, throwing out material or refusing to publish it. At the same time, his art had never been more precisely beautiful than it was here, and his storytelling was absolutely masterful. Issues #65-66 are two near-perfect issues that address every aspect of the book’s overall themes. The “Places” issue, #65, was all about ruminating on various places he had been at a time when he felt out of place and desperate for the idea of home. The genius of Porcellino’s art over time became his ability to pare his line down to its absolute essence without using a cartoony style of art. It’s perhaps the most influential aspect of his art's formal qualities, as many artists (often operating in the comics-as-poetry sphere) have similarly tried their own version of this. In stories like “Iowa City” and “Scott County Memories”, what’s remarkable is not just how expressive they are while still being stripped down, but just how much detail Porcellino is able to fit into every panel without a single wasted or misplaced line. It makes looking at each panel a rich, rewarding experience in its own right, in addition to its function in the overall story. In "Scott County Memories", his ability to convey the topography of an area using perspective and a slightly bending line is eye-opening. The final panel is meant to convey Porcellino and a friend’s wonderment seeing a lake and cottages across the shore on a still night, and once again every squiggle and line is packed with emotional and observational significance.

Issue #66 features “Football Weather” and “Freeman Kame” as exemplars of two entirely different approaches. There’s an almost familial warmth in the former story, which recalls Porcellino cleaning up his yard and playing football with the neighborhood kids as an adult. Not only is there a sense of total belonging (compare to “Punt No Tell” from Map Of My Heart, another story about playing football, only from Porcellino’s adolescent years), there is also a sense of Porcellino as a sort of big brother or even a father figure. It’s hilarious, showcasing an aspect of his work that’s not always mentioned with regard to him. Porcellino’s comic timing is sharp, and his personal interjections (like being horrified at the very thought of his team being named “the Packers”, as a lifelong Chicago Bears fan) add more flavor to the story, making it specific rather than generic. The latter story is a classic “Porcellino in nature” story as he travels to a particularly beautiful mound in wintertime. The use of abstraction here, with the trees becoming sticks and details falling away, perfectly balance what the reader needs to see in order to understand the story and what they need to feel in order to understand what Porcellino felt. 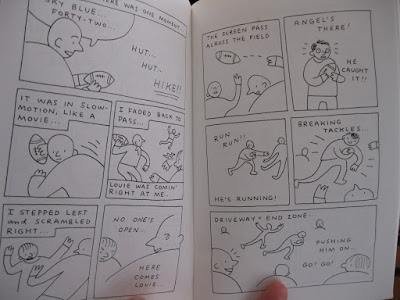 The last issues in From Lone Mountain are the ones where his desperation with having to deal with his OCD starts to bleed through the stories. “Heart” emphasizes how he’s trying to cope with the feeling: “Just be with the heavy heart/Going through the motions/Waiting…” or “Regular World” having him say to Misun as they were going to sleep, “I just wasn’t cut out for the regular world”. “Cabin Flux” is an admonition to himself that as he “Painted yourself into a corner/Paint yourself out”. There are also stories focused on moments of joy, like “Feels Like A Good Day” and Zen admonitions to be in the moment always, like “Anthill” and “Breathe…” which both end with the same message: “Nothing matters but this anthill/ lying here in bed with Maisie, listening to the birds”. Still, that sense of being far from home, from feeling out of place in the world, is ever-present, especially (and wistfully) in the final strip of the main part of the book, “Feeding The Birds of The Fruitful Yield”. On the one hand, it’s a vivid description of a joyful memory as he and his coworkers feed the birds with extra bread they had, another perfect moment captured and recorded. On the other hand, the final line, “I was home”, is devastating when contrasted with the other stories in the book. 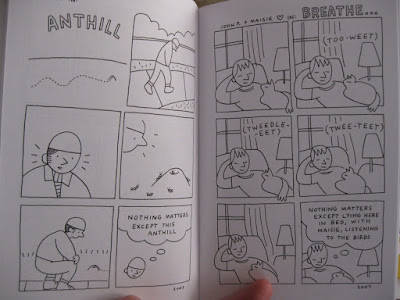 Porcellino’s comments are usually there to simply put stories in context with events of the time, as he prefers to let the reader dwell on potential meanings. He also puts the stories in context with regard to his mental health at the time, which is enormously helpful as a reader. Once again, the extras in the book are fascinating, as they range from material that his OCD would simply not let him publish to minis he did for shows like APE. “3 Poems About Fog” is particularly interesting, as it describes San Francisco in a more direct way than almost anything he ever did in King-Cat when he was living there.

Porcellino’s comics certainly put the lie to the idea that mental illness inspires cartoonist’s creativity and output, because his OCD delayed the publication of his issues by months. While the final product is absolutely beautiful, it came at the terrible price of anxiety that led to redrawing images that were perfectly fine thanks to micro-imperfections that may well have been imaginary by the nth revision. The fact that Porcellino was able to be as productive and creative as he was during this period is a testament to his self-will and Zen practices working in concert, and his career-long belief that King-Cat is always going to be an outlet for him, no matter what.

Rob Clough has written about comics for Cicada, the Comics Journal, Sequential, tcj.com,
sequart.com, Savant, Foxing Quarterly, Studygroup Magazine, as well as for his own blog, High-Low (highlowcomics.blogspot.com).