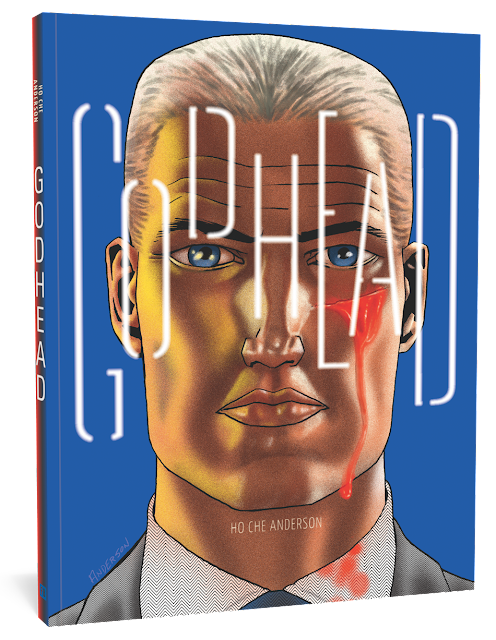 What do you do when you absolutely love a comic, but think it's undercut by things entirely outside the parameters of the story and art itself?

Ho Che Anderson's Godhead Volume One (a second is apparently on the way next year, fingers crossed) is a work of borderline-brilliant dystopian sci-fi, a logical extrapolation of the current privatization of every resource under the sun (although hey, watch, the fucking corporations will probably set their sights on the sun soon enough), a breathtakingly cinematic action spectacle, a compelling tale of sleazy boardroom intrigue, and a fascinating character study. It's drawn in a wide variety of styles that vary from scene to scene according to the dictates of what's happening on the page, it moves at breakneck speed, and it has deep socio-political resonances throughout. Sounds pretty well flawless, does it not?

And when it's firing on all cylinders --- as it usually is --- that's a pretty fair assessment. Anderson is a cartoonist whose body of work has been defined by a kind of full-time restlessness, a refusal to pigeonhole himself down to one "type" of comic --- how else do you explain going from King to I Want To Be Your Dog? In a very real sense, this developing epic feels like the story he's been building up to for the last couple of decades. The near-future world he's constructed here feels incredibly well- thought-through, we're talking down to the last detail, with every character, every interaction, very nearly every line of dialogue rooted in a detailed history we're only somewhat privy to (and rightly so), but that Anderson himself more than likely has broken down, Alan Moore-style, on a massive flowchart somewhere. If this story is a puzzle, then the first of the two chapters in this book puts the outer-edge pieces in place, while the second starts to fill the middle in. That's entirely as it should be, of course --- but it's also a bit of a problem. 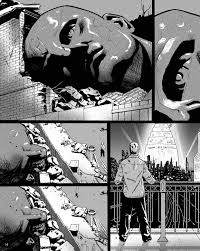 Not an insurmountable one, mind you --- not even close --- but I really do think the "graphic novel" format does this material a disservice. Sure, the oversized dimensions of the book, the glossy paper, etc. are all nice --- but they might be a little bit too nice. Anderson has been doing serialized graphic novels since before pretty much anyone else, of course, so it's natural that he'd go that route again, but I can't help but think that this work would present so much cooler as four individual "floppy" single issues, printed on something a bit closer to newsprint, than it does as two big, fancy books. For one thing, the textured grayscale art would have a much more tactile and "pulpy" feel to it --- and hence a greater sense of immediacy --- on less slick paper stock, and the story really is broken down into single discrete chapters. Which brings us to the second problem not entirely (perhaps not even remotely) of Anderson's making ---

I'm not one for block-cap "screaming" in my reviews, but DO NOT READ THE BACK-COVER PROMO BLURB ON THIS BOOK UNTIL YOU'VE FINISHED THE FIRST CHAPTER. And DON'T GO ANY FURTHER with this review if you don't want key plot points "spoiled" (and here you thought I was just casually disregarding the old "don't give your verdict until the end of the review" rule, but no, there's a method to my madness here, and I got the "buy this, it's great!" part out of the way first on purpose) --- which is precisely what that back-cover promo blurb does. The first chapter limns the outskirts of an almost unfathomably-complex scenario --- a high-power corporate CEO is kidnapped under mysterious circumstances, then escapes under equally-mysterious circumstances after getting roughed up a little bit; an ex-soldier (maybe an ex-con, too?) is struggling between staying on the straight and narrow for the sake of his relationship with his girlfriend and falling back into what he was trained to do; a scientist is working on a massive project that almost no one even dares speak about in anything other than hushed tones; there's some kind of robot army being built that people do talk about; the CEO's security chief seems to take an extra-curricular interest in both said scientific project and every aspect of her boss' life --- what does it all mean?

This, of course, would be plenty to mull over as you wait for issue two, but there's no wait, you just jump right into it, and the story nearly does a 180 : we get flashbacks to a war in Colombia some years prior, which Anderson cuts into and out of with deft precision, that ties some of these individuals together; we discover the CEO and the scientist have an "undercover" romantic relationship going on; our former soldier (and possibly con?) goes back to his former ways; the security chief is an agent of some hidden, shadowy, cult-ish power --- oh, and that top-secret project? They're building a machine that allows people to --- I shit you not --- talk to God. 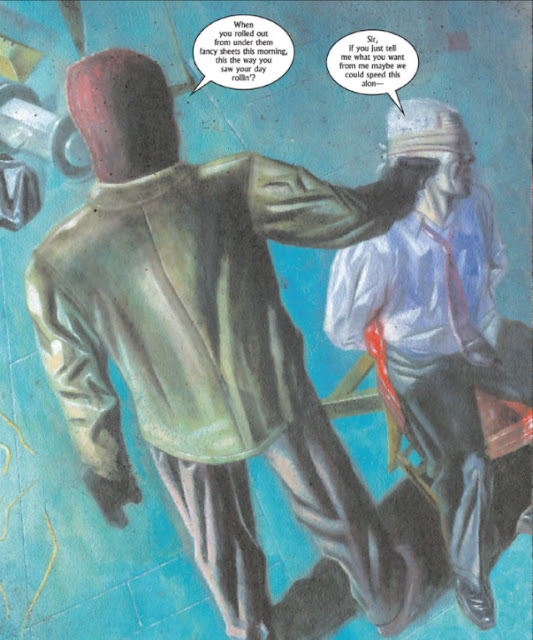 It's a major plot twist. The crux of the story. The grandiose concept to end all grandiose concepts. And that back cover blurb I won't quit bitching about? It gives it away and sucks all the power out of the book's key revelation.

Anderson's work deserves better. The title of the book makes sense once you know this fact, of course, but if you go in "blind," I would argue that just why this thing is called Godhead would stand as yet one more enticing mystery among many as chapter one plays out. Letting the cat out of the bag this explicitly is a decision that, for the life of me, I simply can't explain.My other grip, about the format of the book itself at least has one thing going for it : Anderson's original full-color pages, completed before the decision (one that, for both the record and whatever it's worth, I fully support) was made to go the black-and-white route, are presented in the back looking big, gorgeous, and bold. Had they stuck with printing this book in color, this format would make sense, and still does for the "bonus" material. But telling prospective readers about the whole "machine-that-talks-to-God" thing before they even crack the book open? I can't really see any upside to that, I'm sorry.

Fortunately, the work itself is strong enough to overcome this marketing decision. As you'd probably expect, the "guinea pigs" chosen to be subjected to the titular Godhead machine are all in pretty rough shape, mentally --- that is, if they're even still alive --- and the scenes depicting their abject terror rank right up there with the numerous hyper-violent and impactful action sequences as Anderson's best cartooning in a book full of damn good cartooning that is ultimately anchored, believe it or not, in an (admittedly polished) ethos of individuality. You'd be forgiven for thinking that the human element would be easy to lose sight of in a work this sprawling, this stylish, but no --- everyone here is given such a unique, individual look that their own expressions propel the narrative forward visually every bit as much as whatever they are doing/having done to them does. And speaking of unique and individual, where the heck does Anderson come up with these amazing names? They range from the alliterative (security chief Birdey Brooks) to the too-cool-for-school (former soldier Racer Calhoun) to the inexplicable (female scientist James Fancy) to the appropriately non-descript (the CEO is just, you guessed it, the CEO), to the yes-that's-perfect-for-a-comic-book (deceased company founder Jackson Jackson). This is straight-up genius stuff. 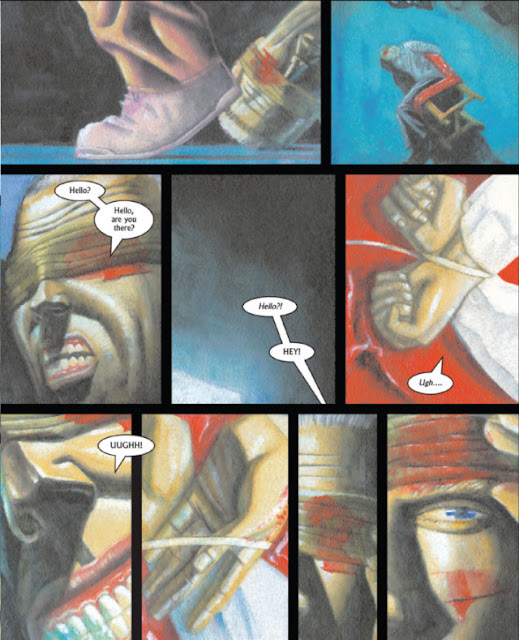 And “genius” may not be a bad description of Godhead on the whole. It depends on where it all goes, of course, but a first half this imaginative, this confident, this striking, this bold --- I don't think Anderson's going to blow the landing. There's a little bit of a Michael Mann feel to these proceedings with the gut-punch immediacy of the action and crisp modern noir atmosphere, and in terms of tone and content I'm reminded a bit of Joe Casey and Piotr Kowalski's apparently-aborted (which is a real shame) Image Comics series Sex, what with its high-finance intrigues, secret cults, and CEO protagonist, but by and large this feels like something utterly unto itself. A world where the captains of industry are vying for control of every aspect of reality itself and where the idea of talking to God seems like a very real --- and very frightening --- possibility.

I just hope that if God shows up in volume in two, he or she isn't too pissed off about having their existence given away on the back cover.