Antoine Cosse's newest book, Harold, published through Retrofit/Big Planet, is one of those books that requires multiple readings in order to … not so much understand really, but feel comfortable with. There is a preponderance of narratives weighing heavy in this book, each one somehow playing into and off of the other, but none of them are fully complete in terms of closure. 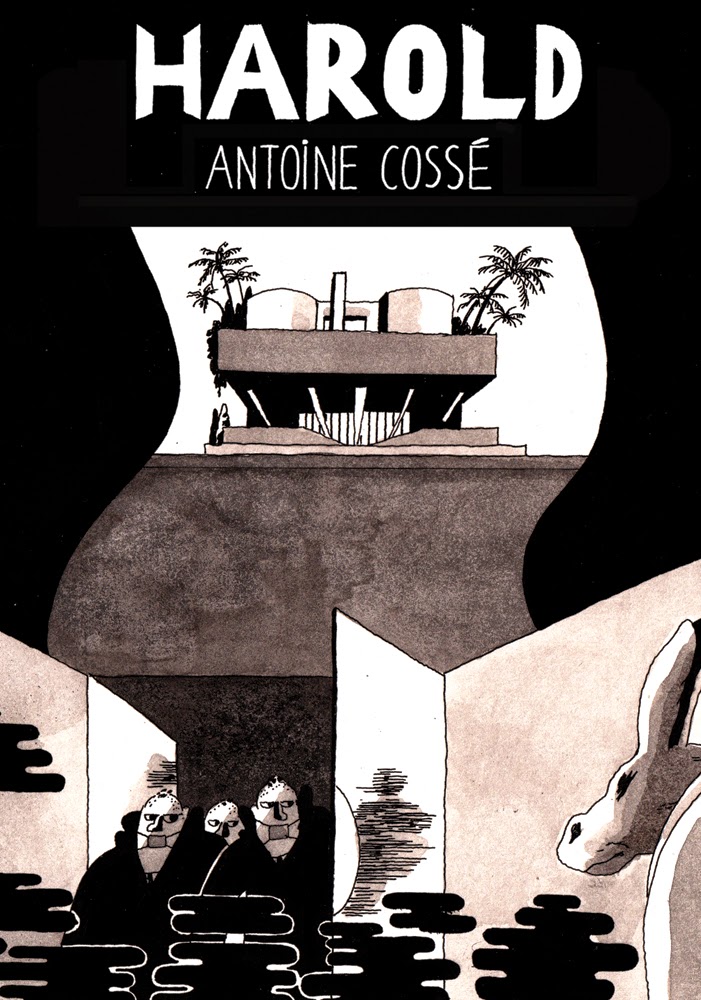 Retrofit's solicitation for Harold doesn't help much in unpacking things. It reads:

As packs of wild dogs roam through a quiet city, a mysterious man and his hulking driver Harold wait outside a luxury hotel. When their car is surrounded by paparazzi looking for a princess staying at the hotel, Harold begins to tell the tale of the rebellion against the princess's father. Mysteries of the past slowly unfold against the strangeness of their present.

Harold is the kind of book that forces questions of intent as much as it raises concerns about choices. Everything is thick with possibility in the book, yet resolution is only to be found in the pages Cosse hasn't drawn.

Here's a small sampling of the notes I took while reading through Harold the first time:


See what I'm doing here? I'm creating a Whitman-esque poem listing questions that Harold's narrative refuses to answer. Frustrating? Yes. Interestingly enough, though, in the face of so many enigmatic quandaries, a reader's response to the book depends almost entirely on how he or she value him or herself.

If you lack confidence in your reading, then you're to blame for Harold's infrangibility. Alienated by your own lack of understanding, you feel shamed and shaken – you cast the book aside with a teenager's sulk and call it “stupid” while petulantly stamping your feet.

If you feel adroit in unpacking difficult texts and you still find Harold tight in its grip on its mysteries, then you skew your sideways glance at Cosse himself. You sit in your chair by the fire and, while rubbing your belly, use multisyllabic words to hurl biting diatribes at his failure as an artist.

So much of our world is built around our own sense of self. We enter experiences with selfish aspirations.

But maybe this resignation and blame is besides the point. Maybe the pointlessness is the point. 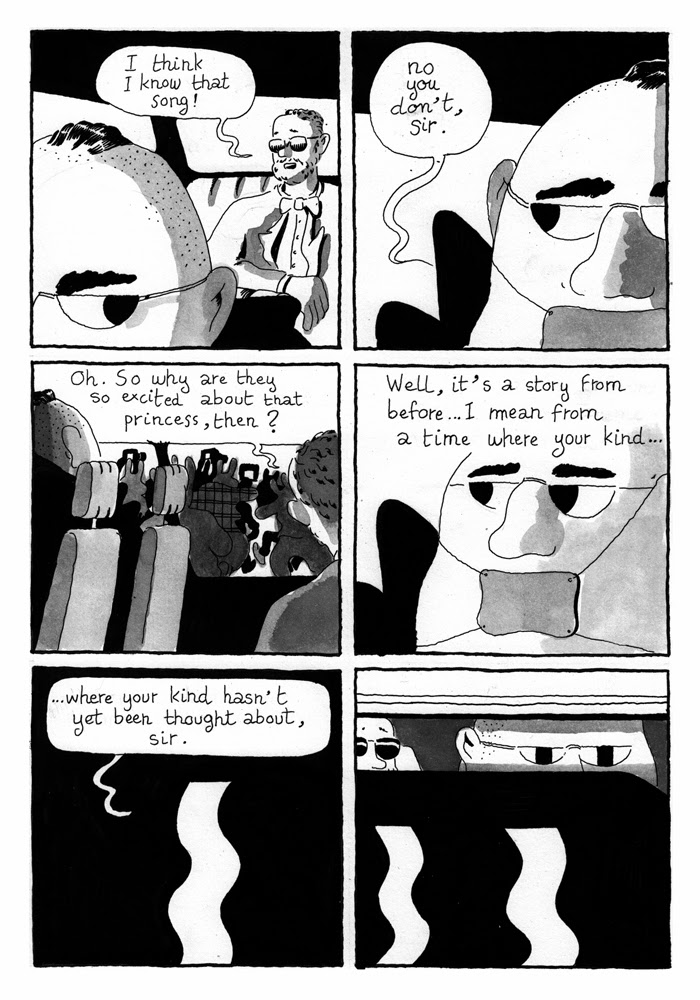 Is there equivocation in admitting that unintelligibility is sometimes precisely what is necessary for what the artist wants to convey? Are there times when in order to clearly communicate a theme, the artist must eschew explicitness and exactitude?

I'm fairly certain you've seen it before. I know that I have.

Back in July of 2012, my friend Keith Silva and I went around the bend on this issue as we tried to figure out meaning in David Hine and Shaky Kane's BulletproofCoffin: Disinterred  and my panic and his assurances warrant a revisit in the context of examining Harold.

In the course of writing about Bulletproof Coffin: Disinterred, I had panicked because I couldn't wrap my head around what Hine and Kane wanted me to grok. Silva called these artists “perennial expectation deflectors, subversives of subversions” operating in a realm of “no truth, only subversions of subversions and that kind of thing is as unsettling as it is uncanny.”

Which, come to think of it, did little to assuage my panic...

While Hine and Kane were tilting at the windmills of comic books past and painting pages with the goo of post-post whatever it is that we've moved past already, Cosse, in Harold, is working from a different set of influences – more Truffaut and Chabrol then Ditko and Kirby – so this concept of subversions of subversions has its place, I suppose. It's just transferring the medium and therefore putting up more walls to comprehension as it tickles the anus of expectations.

Later in that review of Bulletproof Coffin, Silva then had the audacity to suggest that not everything has to be clear to carry meaning, that perhaps we see best through an opaque lens. He wrote, “it's not supposed to make sense. Why should it? I like order as much as the next dude, but messiness, like it or not, makes life worth living ... somebody's got to straighten crooked pictures in hotel rooms, after all.”

Yea – I get all that. Over time we become blind to the familiar – sometimes we need something sui generis in order to regain our sight. “Easy is static; creation is dynamic,” I said. 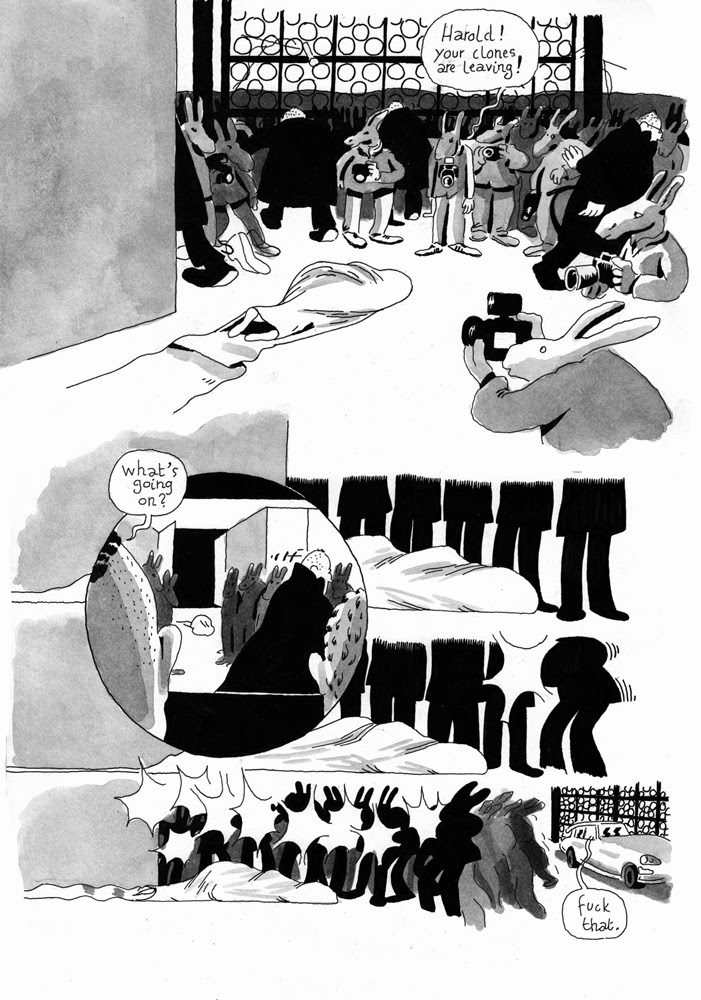 Following this train of thought, last night Comics Bulletin publisher Jason Sacks said to me something along the lines of how the absence of a traditional narrative structure not only makes you work harder towards understanding, it also allows a story's emotional resonance to step to the forefront. Perhaps this was Cosse's plan?

Yet the emotional weight of Harold lies mostly in its insouciance. Its indifference manufactures a yearning of sorts, the sense of something lost and the longing for either its return or something better to replace it. But the lack of beginnings and endings to its multi-layered narrative makes whatever that thing is or those things are purely a matter of speculation, as if all the signposts are there to guide you, you just cannot penetrate the language.

So where does that leave the reader and, more importantly for my purposes now, the critic? Of course there is that liminal state between knowledge and inability, between logic and emotion, between appreciation and repulsion, but it is truly an uncomfortable place to inhabit. The fact that Harold has brought me to this place bears note as much as it does merit. 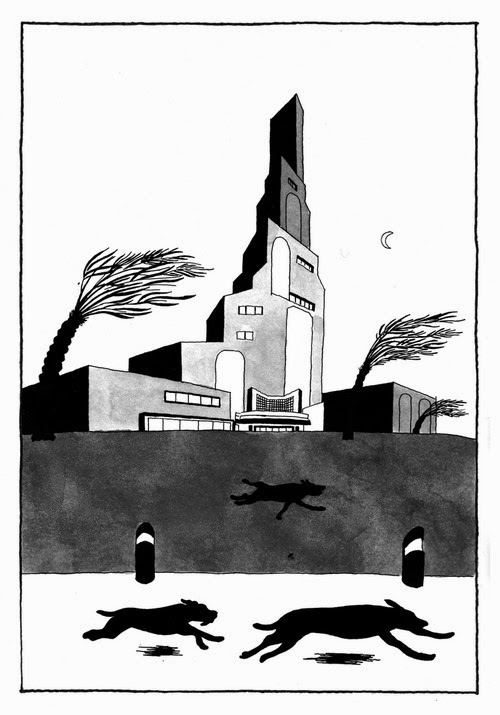 Fundamentally, Antoine Cosse is playing a chess game with a book like Harold. He's relying heavily on your sense of personal value, as much as he is his abilities as an artist. This is a complicated book masked as a simple, though beseeching story. Cosse plays with negative and positive space in order to reflect the duality of your own substance. He sets loose all the wild dogs to chase and devour who you think you are.

Harold plays an off-kilter funk to the rhythms of your prehension – or lack thereof – and demands either you dance or get off the floor.

And that, perhaps, is its intrinsic value. Art gets you gamboling one way or another.

You can pick up a copy of Harold from Retrofit here.