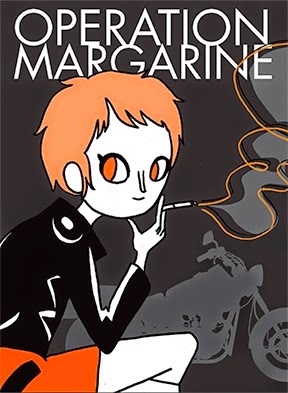 Katie Skelly knows her way around exploitation: what to show, who not to cover up, where to put the accents, when to be bold and how much of each. Her 2012 debut graphic novel,Nurse Nurse, was a tease in all the best ways, a goofy nitrous high of see through strips held together by a barely there narrative, but the charm, oh, the charm. Skelly’s characters possess all the pathos of Shultz’s Peanuts with the charisma of a Daniel Clowes or a James Kochalka oddball. Operation Margarine sees Skelly pin the needle to the right and give a throaty roar of a creator in full.

The lives of bad good girl Margarine (sounds like bombazine or aubergine) and bad ass Bon-Bon have become dead ends, or worse, cul-de-sacs. Margarine is a society gal (Claudette Colbert in It Happened One Night wearing Mia Farrow’s pixie cut from Rosemary’s Baby) fresh from a recent breakout from a psych ward, Bellefrew. Bon-Bon bears the scars of too many bad relationships with other women’s men, she steals, favors black leather biker jackets and alcohol. Margarine and Bon-Bon want the same thing: escape. Their problem is neither one knows where nor what they’re escaping to.

Operation Margarine plays like Skelly’s riff on truth or dare, expect ‘dare’ is the only option. For Margarine and Bon-Bon, truth (especially the past) is a fink, painful, messy and best put in the rearview mirror. When Margarine asks Bon-Bon, "So, where you from?" the response she gets says a lot, "Marge, I have an idea. Let's skip this part. Let's just be ... new people." In other words, 'nuff said. The motorcycles they ride, the clothes they wear and cigarettes they smoke act as signifiers, these girls are bad, sure, but they’re not drawn that way; those peter pan collars don’t lie. 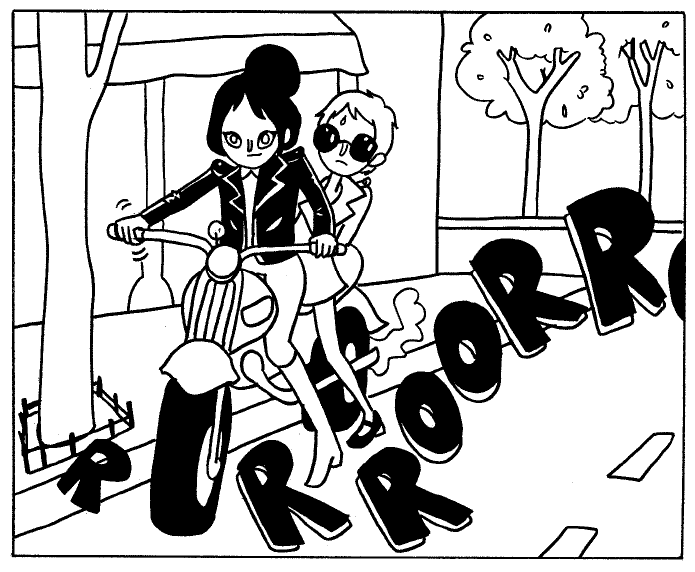 Skelly’s work is a study in deceptive simplicity. From her line to her writing and from her character development to her panel composition, all of it aims to exploit the reader’s expectations, to write off a lack of realism for a lack of depth. To read a Katie Skelly comic is to pay attention to small details. As austere as each panel may be each one contains all the information the reader needs and nothing less. Skelly’s neatness and orderliness is her tell. Like her characters, Skelly seems to say, ‘go on, underestimate me, I dare you.’ Like the man sez, “the sweetest kittens have the sharpest claws.”

Skelly’s art of deception comes correct in her cartooning. To maintain appearances, Margarine’s blond urchin cut offsets Bon-Bon’s black bouffant, dark and light, good and bad, a binary pair if there ever was one. This kind of black and white dichotomy gives Skelly a unique way to use and exploit her B&W comic to her full advantage. After an ambush and an octane-fueled flight from the heterochromia iridum Billy and her gang, the ‘Faces of Death,’ Margarine and Bon-Bon cool their boot heals around a campfire under a star filled desert sky. 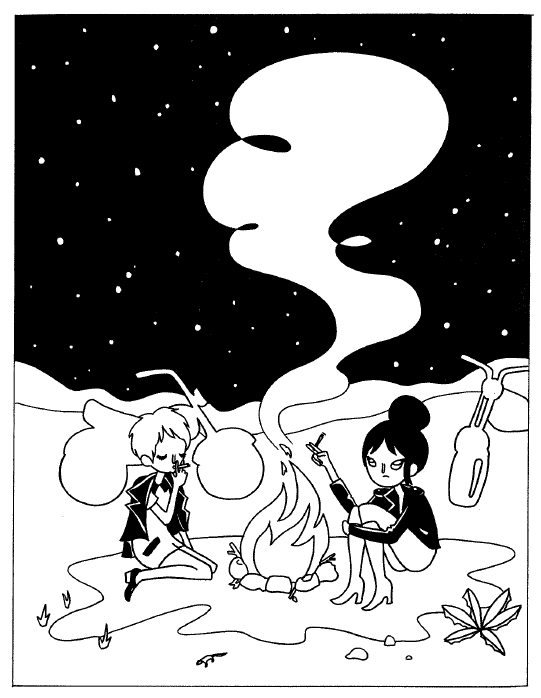 In all Operation Margarine’s one-hundred-and-four pages, this is the one moment Skelly chooses to draw as a full page, a silent character study of peaceful repose. Margarine’s eyes close as she takes a drag on her cigarette. She supports herself with her left arm, her posture is open. She wears her leather jacket like a wrap, a society girl through and through. Opposite Margarine, Bon-Bon, holds her cigarette away from her body, her big eyes narrow on the campfire smoke and the stars in the sky. She sits with her legs curled up (coiled) in front of her and slings a leather clad arm around her body like a black iron bar. She looks as hospitable as a rattlesnake. Such a simple and serene image, so quiet and yet Skelly makes it thunder with heartfelt and complex emotions of these seemingly clichéd characters.

In the following page, Skelly drops the black-and-white-good-girl-bad-girl aesthetic and everything becomes a bit more … transparent. Except for two small square panels in the upper left (scorecards of who’s who), Skelly turns Margarine and Bon-Bon into blanks, outlines. Margarine, always the naïf (at this point, at least), says, “I’ve never been in the desert before.” Bon-Bon responds, “only one thing to know about it … there’s nowhere to hide.” 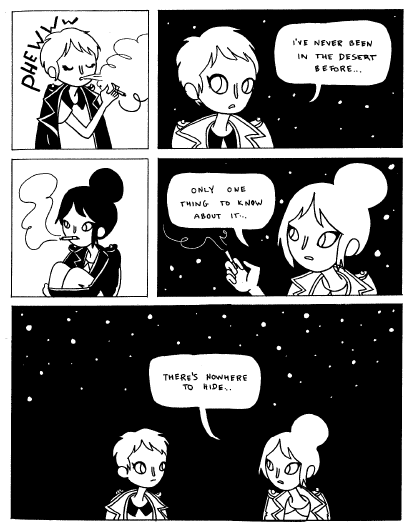 The combination of Bon-Bon’s words with the composition of the page and that final panel mark Skelly as a master cartoonist and storyteller. She provides all the portent and foreboding of a horror movie as she dwarfs Margarine and Bon-Bon at the bottom of the frame to make them look small in the midst of a cold, dark and uncaring universe. And then there’s the second half of Bon-Bon’s sentence -- the ‘there’s nowhere to hide’ part -- which provides an extra little turn of the screw and acts as the knockout punch to the wind up of the facing page with all its perceived serenity. Troubled and in trouble: Bon-Bon and Margarine laid bare. This is the style of delicacy, drama and dread with which Skelly operates in Operation Margarine, all of it in one (not so) simple panel.

In Nurse Nurse and Agent 8 -- an erotic web-comic at Slutist.com -- Skelly sugars off her love of Barbarella and other trashy genre-specific kitsch to create something singular, something very Skelly. She’s less an imitator and more a genre-stylist; innovative and comfortable in the cottony familiarity of genre. Yes, Operation Margarine is about two wayward wanton women who ride motorcycles through the desert in search of satisfaction if not solace and should Skelly want to ape such exploitive fare like Faster, Pussycat! Kill! Kill! she will, but Operation Margarine ain’t it. Still, it’s fun and to mix and Skelly sure as hell accessorizes like it’s going out of style.

As her podcast, Trash Twins, with Sarah Horrocks makes plain, Skelly is familiar with the high-brow notions of low-brow culture. Again, Skelly shows herself to be a ‘playa’ when it comes to genre tropes, exploitations of exploitations. In Operation Margarine’sinevitable showdown scene, Bon-Bon and Margarine are met by the book’s big bad, Billy, or at least her long legs.

This gunslinger stance, one lone duelist framed by the forked legs of another, is a trope in and of itself. Skelly plays off this ‘Western’ iconography, yes, but as seen through the lens of the ‘bad girls lost in the desert’ storyline and Skelly’s love for the exploitation genre, this image also riffs off of a similar showdown from Russ Meyers’s “belted, booted and buckled” masterpiece,Faster, Pussycat! Kill! Kill! 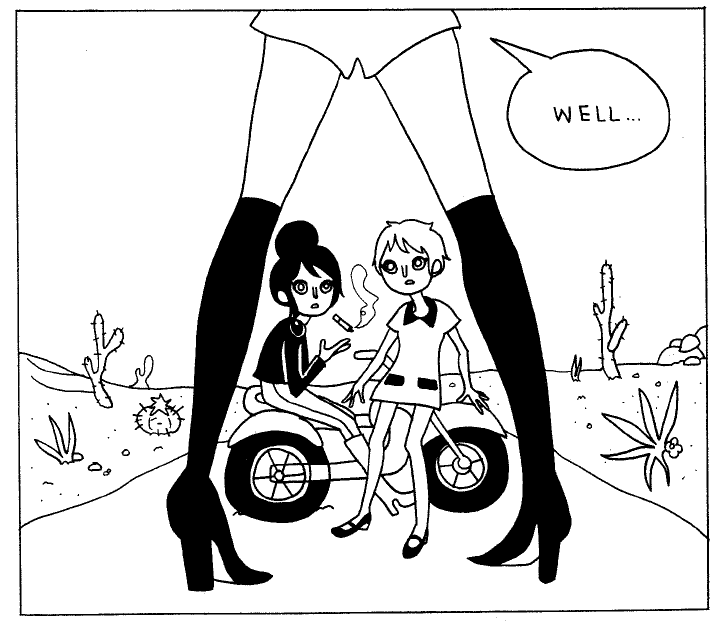 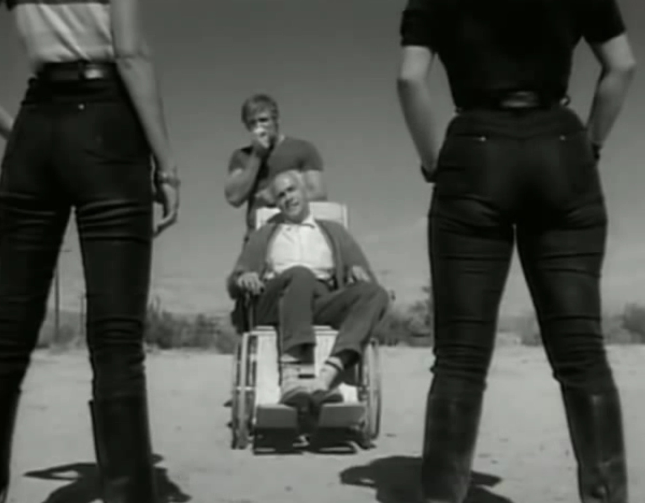 There are more than a few throw-down/show-downs in Faster, Pussycat! Kill! Kill! and all of them frame up the physical assets of the three leads, especially the iconic Varla played by the even more iconic Tura Satana. When Varla and Rosie (Haji) confront the old man (Stuart Lancaster), Meyer foregrounds his lead’s backsides like twin colossi in black denim. Their prominence in the foreground squeezes the small frail handicapped hermit and his big dumb son as well as the frame itself. It’s clear who has both the upper hand and who draws the camera eye. For what it’s worth, Meyer cuts to this same shot (the exact composition) six times in less than two minutes, always heavy-handed, always the pervert.

Like Meyer, Skelly exploits the iconography to make it her own. The long legs and short skirt of the dangerous Billy frame the smaller and less powerful Bon-Bon and Margarine. Billy becomes a Goliath; so much so her upper body doesn’t even fit in the frame. To this point in the story Billy has only been the threat of a knife. Now Skelly pulls that knife and shows it to her heroes. Whereas Varla and Rosie were the intimidators in F,P!K!K!, Skelly subverts the subversion and makes her heroes the demure and defenseless ones. This intimidating image calls back to Bon-Bon and Margarine in the desert being crushed by an unfeeling universe except now that menace sports thigh-high black boots. A killer figure for sure. Once a knife like Billy gets pulled, someone has to die and someone has to live to tell the tale.

For all its female empowerment, Operation Margarine has balls in more ways than one. All in all, it’s a coming out party with Margarine as its débutante. She’s the object of the title and the story. But it’s the ‘operation’ or in this case, the operator, Bon-Bon, where the story and Margarine get their strength. Like her namesake, Bon-Bon has a hard shell, but she’s soft(er) on the inside. She looks out for Margarine. She is her protector, her champion and in a way, Margarine’s (re)maker and creator. Katie Skelly is a Bon-Bon. She knows to create, no matter the medium or the raw materials, means to let go. At the end of Operation Margarine Bon-Bon lets go, she has to, and so too does Skelly. Ride on, Margarine, ride on.

Operation Margarine is available from AdHouseBooks or directly from KatieSkelly.

Keith Silva is a writer, photographer, and producer for a long-running locally produced Vermont television extravaganza. Follow him on Twitter @keithpmsilva