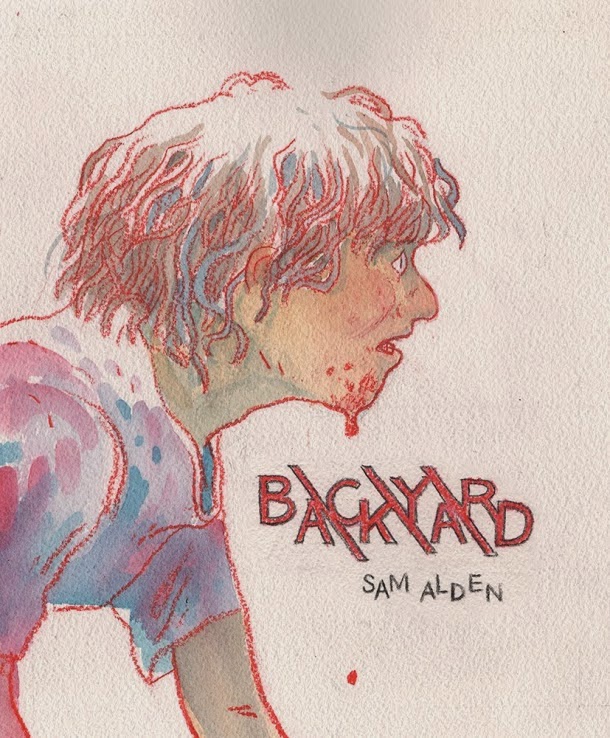 Keith Silva: Sam Alden makes me think comics.
In the last month I've spent the same amount of money on Sam Alden comics as it costs to buy a moderately priced bottle of Kentucky bourbon. I say this not as some 'hey-look-at-me-supporting-small-press-comics-instead-of-drinking-booze-come-to-Jesus' kind of moment, no. I'm talking economics here, comic economics. What is a comic worth and where is it best to invest one's time and money?
Alden's Backyard has become the next step in my evolution as a reader of comics and small-press promulgator, washed clean in rain and chicken blood. I cannot stop thinking about this book. There's more in these twenty-four pages, this 6 X 5 inch package than most of the weekly fix I receive from my LCS pusher. My gut says, 'why can't all comics be this deep, this good?' While my head says, 'I know Backyard is good, but is it that good?' It's probably me. I should shut the fuck up. The problem is; it is that kind of book, sticky and troubling.
Backyard is a deviously simple (read: deceptive) comic. It's like a good short story or, better, an actual 'shorter letter' for fans of the Pascal-by-Locke-by-Ben-Franklin chestnut: 'If I had more time, I would have written a shorter letter.' The final page (not counting an inside back cover coda) offers an ending, but not a resolution. Or is it the other way 'round? Either way, uneasiness runs rampant in Backyard; a squinchy and squirmy anxiety within and without the narrative.
The story takes place in a New Orleans commune. A community where phrases like: ''Okay, if we feel okay about the compost thing?'' and ''I was fired by a fucking unjust system'' are commonplace. What's a little outside the norm is Molly. See Molly ''stopped wearing shoes in June … and she stopped talking a little after that.'' Molly's gone to the … well, she's feral, more feral than most. There's more, of course, and all of it too wrong, too strange and too beautiful to ruin. Backyard lingers … like the smell of chicken shit in high summer.
After my first reading I thought I had Backyard sussed, judgments were made and rulings were delivered. Then I read it again and again and again. Each time I (re)read it I discover new information. My opinions mutate and everything turns from black and white to grey all except when it comes to Molly. For her, my sympathy only increases. What about Molly? What about Molly?

Part of my satisfaction with Alden's comic comes from how he imbues a faux-righteousness into the other non-feral characters. Their ambiguous morality is as likeable as it is identifiable and loathsome, ah, to remember a time when the world did revolve around everything I did and the outside forces I held in contempt, halcyon days indeed. To root or cheer for the characters in Backyard goes beyond the pale, to pity them misses the mark and yet there's admiration in their assholery and their clueless blamelessness. Mostly, I feel bad for Molly. She needs help and, maybe, shoes.
What Alden offers in Backyard and what has me so riled up to write about it is the inherent challenges of an open-ended narrative. I'm O.K. with Chinatown type endings, closure or completion, for me, isn't the only metric by which to critique a work. However, Backyard for all its power and brio does fall short, there's 'there' there, much more. It's less of a case of critiquing 'the-story-I-want' versus 'the-story-I've-been-given,' and more a question of does Alden sell himself short?
Perhaps I'm the one who can't see past my own assholery? I never get this indecisive reading most other comics, so what gives with this one? I know I'm overthinking it and yet … Backyard is a good short story. Full stop. Perhaps I should leave it here (for now) and go back to killing brain cells with moderately-priced alcohol and more mainstream comics. Where's my Walsh? Who's gonna say: ''Forget it, Keith. It's Backyard.'' Elkin?
Daniel Elkin: It's okay, Silva. I'm here to help.
What makes a book like Backyard cause you to wonder if you're overthinking it is the fact that IT IS morally ambiguous and wrapped in simplicity. Its inaccessibility is easily accessible. This is a book that reads you much more than you read it.
As one of the characters says, ''I think when you look at her you're seeing something I'm not.''
If you are the kind of person who loathes a certain type of laze-about-hippie pomposity, then Molly's story becomes one of those plights of the mentally ill in a society more wrapped up in their politics of self than actual human empathy. When people are more concerned with how they are perceived than how they actually are, those who need help most, like Molly, have nowhere to turn.

If you are the kind of person who sees the world as collapsing under the unending hunger of consumerism and a detachment from the natural world, than Backyard is a story of what happens when we turn into the inevitable animals we shall be forced to become. It's a grim fairy tale, a moral harangue, a story politic.
If you are someone concerned with questions of community and interpersonal interactions, Backyard reads another way.
If you are someone who is full of rage, full of sadness, full of hope, full of joy, each one of you reads it differently. With ever changing moods come ever changing readings. With political evolution, the reader's eyes renew. As we grow older, our understandings change, as do our appreciations.

And a true work of art can hold it all. It can be the cistern for all the perceptions, the goblet from which all these drinks are served, the toasted pumpernickel bread in which we can layer our fine assortment of deli meats. Backyard is that kind of work, which makes Sam Alden that kind of artist.
Does Alden sell himself short? If a work is to be judged by the questions it inspires, then the answer is clearly no.
He ain't no coffee table.
I, too, have read and re-read this book and I'm not sure yet where my chickens shall come home to roost. I know this is a work that speaks to me as it speaks to you, Silva. I'm just not sure if it's speaking the same language to us both. All I know is that Sam Alden sees a hard rain falling on someone, for some reason, and when it does, everything starts to completely unravel.
Is this type of experience worth more than a bottle of Kentucky bourbon? Is there more of an aftertaste to taking a shot of it? And good lord, are you prepared for the hangover, my friend?
Silva: Comics (and booze) prepares one for anything, Elkin, you know that, you know.
Another read of Backyard, another realization: 'God' (the word) appears a couple of times, but there's no 'dog' to be found. Do you think Alden has seen those 'God is just Dog spelled backwards' bumper stickers or novelty t-shirts and likes 'taking the piss?' Clever.
With his use of light from behind Venetian blinds, Alden draws like John Seitz shot film, mysterious, moody and verynoir, another nod towards the mash of ambiguity and moral vagaries this story soaks in. The way Alden draws rain when it comes in contact with feathers and flesh, hoodies and hair shows an artist who understands style and close observation, cartooning by gut.

For all its fluidity, its atavism, Backyard forms a very tight construction. Alden thinks everything out. The narrative, cartooning and dialogue all dovetail, complement and complete -- Backyard is what 'comics' means, what we talk about when we talk about comics. It's apt to nick the title to one of Raymond Carver's best known short stories (and collections) and to talk about Backyard because it attains the same brevity and intensity -- that Kmart or dirty realism -- Carver was able to achieve. Still pictures run deep in Backyard.
I began this review thinking of it as a harangue against the blandness I find in most mainstream comics as opposed to the lush life of self-published or small press comics. I think I've beat that horse far too long. It's all comics, all of it. To act with such righteousness, to prize one over any other misses the mark, it's like carrying on with an ''important house meeting'' when there's incessant barking coming from the backyard. No one needs that kind of tin ear insensitivity, most of all comics. Sam Alden makes me 'think comics' because he shows (and tells) in equal measure. Sam Aldenmakes comics, a study in comics.
Elkin's 'if riff' says it best, Backyard is a comic if … if … if …