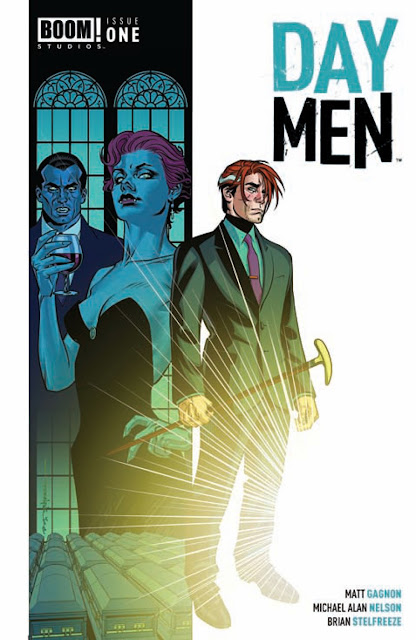 I may be breaking new ground here, but in order to do a short review about BOOM! Studios' Day Men #1 by artist Brian Stelfreeze and writers Matt Gagnon and Michael Alan Nelson, I need to address a review of this book that Andy Khouri wrote for ComicsAlliance. In effect, I will be reviewing a comic by reviewing a review of that comic. There may be a term for this, but right now I don't know what that is.

Day Men is a vampire/mafia book. The vampires in this story use “Day Men” to do their bidding and business during the sunlight hours to keep things running smoothly. The story revolves around David Reid, a Day Man who works for the Virgo family, and this first issue spends most of its narrative on exposition, setting up the beginning of a war between vampire families. What is most notable about Day Men, though, and what sets it apart from the myriad vampire comics out there, is the work of Brian Stelfreeze. 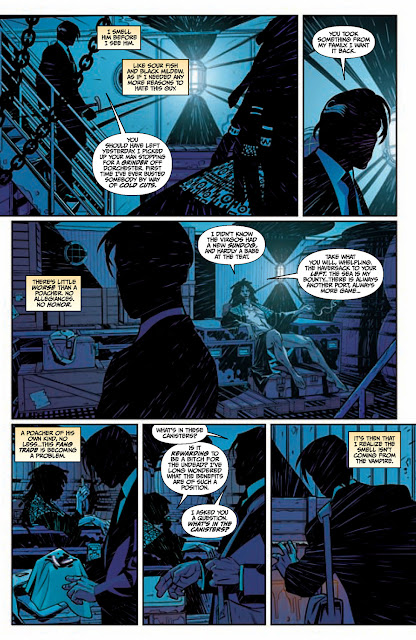 As Khouri notes in his review, “Day Men is the first BOOM! series built completely around a marquee artist... His weirdly hypnotic, angular-yet-curvy style consistently informs every detail of every page...” I completely agree with Khouri's assessment. This book is an amazing visual experience. Stelfreeze creates a fully actualized world and, through his art, is able to give us levels of characterization that words alone could never reach.

It is certainly the kind of book that gives us, as Khouri notes, the opportunity of “rediscovering and recognizing what comic books actually are: art.”

In his review, Khouri uses this idea as a platform to discuss the fact that critics and publishers alike often talk about comics “with the writer typically receiving most of the credit as the author... When artwork is mentioned it's typically only in passing, and even then only with respect to how it compliments the perceived work of the writer.” Comics nowadays are mostly promoted in terms of their authors, not their illustrators. Image Expo 2013 was a good example of this, with the only artists appearing on stage being Nick Dragotta and Jason Latour. Khouri notes in his review that this sort of writer-centric promotion seriously undermines the storytelling contributions of the artists. He wants us to remember that “Story is art. Style is substance. A comic is not a comic until it is drawn.”

That's right, a comic is not a comic without the art. The intersection between words AND pictures is what makes a comic book a thoroughly unique narrative form. 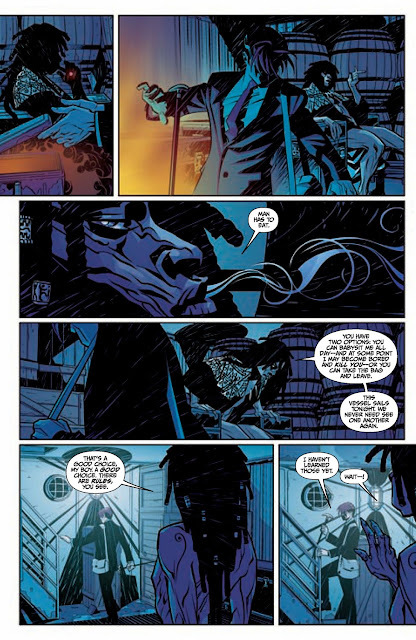 Khouri admonishes us not to review a book like Day Men following this writer-as-storyteller paradigm. It is a book that is only possible because of the artist-as-storyteller. Comics are a collaboration between words and pictures, and we, as audiences, reviewers, and publishers, do a disservice to the art form when we forget that. Steelfreeze's work on this book should remind us of this.


So read Day Men and, as you do, understand what it is that immerses you in this world, what keeps you turning the pages, and what makes this book such an enjoyable experience.