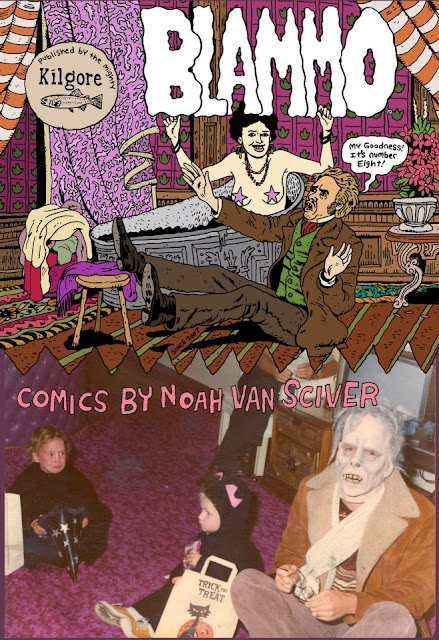 Come, children, and drink deep from the well of despair. For in these times and in all of our interactions we only misunderstand the intentions of others. Through this misunderstanding we drown in our own sense of isolation; we choke on loneliness with our every breath.
That's right. There's a new Noah Van Sciver comic out.

Noah Van Sciver has been putting out books at an almost feverish pace of late. There's been 1999  from Retrofit, his amazing graphic novel The Hypo from Fantagraphics, Deep in the Woods from 2D Cloud, and now he's just recently released the latest issue of his ongoing series, Blammo, a collection of eight stories that seem to all revolve around the classic Van Sciver themes of our tragic inability to connect with others, especially the ladies, and the brooding loneliness this engenders.


On his blog, Van Sciver says this of Blammo #8:

So basically, I drew most of the comics in this issue after splitting with a long time girlfriend who I had shared an apartment with. I had to move in with my mom in a spare bedroom. I spent my time there locked away writing. This issue is the result of that time. A mix of comics that all in some way were about what I was going through.

This is not a collection for everyone, especially people who are in healthy relationships or like to smile.
Blammo #8 is book ended by a short piece called "Dog on Wheels." It revolves around a toy that the author bought for a woman he was once in love with. Something reminds him of the toy and he buys a new one, only to discover that the idea behind relationship -- the idealized preciousness of what they shared -- was not the true nature of the situation. Reflection vs. reality -- the ideal vs. the real -- how loneliness tints the glasses rose: this is the realization with which Van Sciver begins his collection. We don't connect because we can't connect, and yet, somehow, the idea that we can persists.

"Expectations," the best piece in the collection, takes this theme further. Once again a relationship has ended and all the uncomfortable realities that this breakup creates swirl around the protagonist. There is a realization: "Looking backwards while walking forwards is no way to get somewhere." Yet even at the end, we are still among the ghosts of the past.
"Charles the Chicken" is also about separation, although wildly and weirdly so. At one point, Van Sciver even steps outside the narrative to apologize for what is going on. Still, the themes of loss, false faces, and sacrifice echo throughout the piece.
Blammo continues with Van Sciver taking on the Brothers Grimm. "The Wolf and the Fox" explores ideas of dominance and gluttony, wanting too much and the toll it takes on the self and others. Van Sciver's art really takes the front seat in this particular piece. His layouts and border work distinguish the fairy tale aspect of his story, and his backgrounds are thick, inky, and full. It is easy to forget how talented an artist Van Sciver is as you get subsumed in his angst. This piece reminds you that he is also an excellent cartoonist.

"She's Losing It" is another odd tale of miscommunication and isolation. Lines like, "There is so much madness." and "It's hard to appreciate anything until it's gone." pretty much sum up the gist of the piece. Occasionally I read something from Van Sciver and get the sense that beneath all of his nebbishy sadness and existential angst, there is a rage brewing. This story is one of those. It's an understandable rage, but this understanding doesn't temper its ferocity.
You know that rage. You have been there before.
"I Don't Love Anyone" is a dream piece in which, once again, Van Sciver has a character grabbing on to the warmth of the past, not the truth of the present. Once reality intrudes, there is panic, sadness, isolation, even in dreams. We delude ourselves thinking that there is comfort in memory, possibility in the previous, but we are actually alone. When we snuggle into a warm bed, we find that we are in someone else's house.
The final extended piece in Blammo #8 is a continuation of Van Sciver's "Punks vs. Lizards" piece. While still grounded in loss, this one is more a revenge story and, in some ways, a story of redemption. In this, Van Sciver writes my favorite line in the whole book, "If there's one thing I hate more than fuckin' lizards, it's seeing lizards FUCKING!" It also has the best use of the Bad Brains' song "Sailin' On" ever in comics.

Is Van Sciver really ready to sail on by the end of Blammo #8? Has he worked out his relationship with his relationships? Is he comfortable in his failures and his loneliness and his isolation? Has he come to terms with the human condition and can now stride forth into the world as an artist content with himself and the role he plays in the world?
"Dive Into That Black River" ends Blammo #8. Here Van Sciver gives us his final message, "There is no end to it at all."