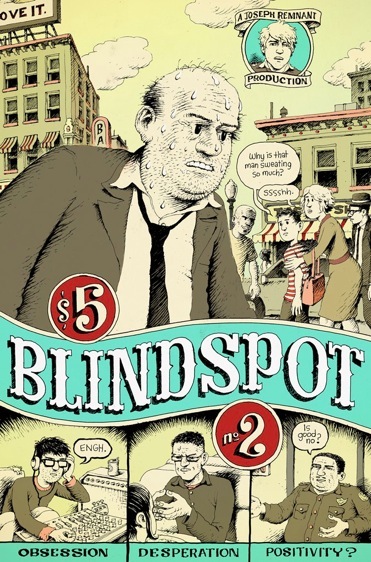 I first ran across Joseph Remnant when I reviewed Harvey Pekar's Cleveland for this site. In that review, I wrote: “It seems like Remnant understood that as Harvey talked about Cleveland, he was also talking about himself. Remnant is able to somehow suffuse his art with this sensibility in such a subtle way that it blends the ideas of the two narratives together seamlessly.” An impressive feat, wrought by an artist coming into his craft.
Needless to say that when I found out that Remnant was self-publishing his own comics, I jumped at the chance to take a look at what he could do on his own. I have to say that what Remnant can do on his own is pretty damn impressive.
Blindspot #2 consists of three short vignettes and one extended narrative, all of which seem to revolve around the themes of the struggle of creation and the consequences inherent in that process.

The first vignette is the three-page “Delusions of Grandeur” in which a musician, in an attempt to “show these slack-jawed, mouth breathers what true art is,” devotes his entire self into the creation of “one of the greatest albums of ALL TIME!” The second vignette, “It Changed Everything” concerns a first date that is going very well until...
These two stories are then followed by “Lip Candy featuring Bill Wilkinson” a 22-page tour-de-force exploring failure.
Each one of these stories have abject moments of palpable pathos. They descend into stomach tightening expressions of the loathing an artist can feel toward an unappreciative audience and the toll that takes on the creator. And yet in each of these stories, Remnant ends them with the creator returning to his art, picking up the guitar, walking back into the office, starting again.
Remnant's Blindspot is, as its title suggests, an ode to the fortitude of the creative soul. It celebrates the ability of the artist to create a blindspot to an indifferent audience and to keep creating.
In “Delusions of Grandeur,” it is one obscure praise that brings the artist back to his creative urge. In “Lip Candy,” it is the individual himself who blinds himself to all his failures and strides back into the fray.

The final vignette, “Juan the Security Guard” sums up what could be the overarching theme of the book. Happiness is found in self-contentment, being comfortable with who you are and how you live your life.
Joseph Remnant has put together a collection that, even in its misery, is a celebration of the independent spirit. Blindspot #2 is the kind of comic that understands that every day there are forces out there that will push you in the mud, but it is also the kind of comic that puts you back on your feet.
You can  purchase a copy of Blindspot #2 from Indy Planet and check out Joseph Remnant'swebsite.