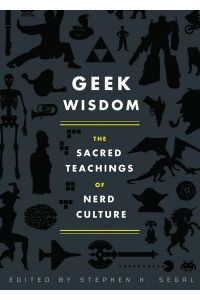 Edited by Stephen H. Segal
Published by Quirk Books
Reviewer Rating: 2.5 Bullets
I have a confession to make. I’m one of those guys that over-intellectualizes just about everything. This flaw in my make-up leads me to spend precious moments staring off into the ether of the Universe when a more immediate response is called for. I have been chastised for this behavior on many occasions by friends, lovers, and bosses, but it is such an integral part of my being that I can only apologize and vow to do better in the future.

The reason I make this confession is that it serves as a background for this review. When presented with the opportunity to read and give my thoughts about a book titled Geek Wisdom: The Sacred Teachings of Nerd Culture, my initial reaction (after much thought, of course) was that this sounded like a book written just for a guy like me. I mean, I have no reservations about being labeled a Geek. A book that, from its title, sounds like an exploration of the underpinnings of this label seems to be right up my alley. See, to me, the title suggests that the book will be a cohesive philosophical tract concerning what it is, exactly, that makes a Geek a Geek; it sounds as if this will be a carefully deconstructed understanding of why I lean towards what I lean towards.

Unfortunately, that is not what this book is.

For editor Stephen Segal, geekdom, geekhood, being a Geek is tantamount to a form of worship. He claims that this book is to function as if it were this religion’s bible. As Segal writes in his introduction to Geek Wisdom, this is “the first compendium of sacred teachings from the wide ranging ‘holy scriptures’ of geekdom, that weird mass of pop culture and high art ranging from blockbuster movies to esoteric novels to cult-classic T-shirt slogans.”

Geek Wisdom consists of a approximately 200 quotes from various pop-culture sources upon which Segal and four other contributors wax philosophical. They take each quote as if it were a Nietzschean aphorism or a Zen koan and fill a page with an attempt to either understand it in a general context or expand upon it in terms of a more universal truth about the human condition.

The problem is that there is no unifying theme to the explanations. If this is supposed to be a “bible” for Geeks, then the religion is as dysfunctional as the stereotype that Geeks themselves often suffer from.

It is as if Segal came up with the idea for the book, one of those “Wouldn’t it be cool if…” moments, and then farmed a bunch of the work out to his friends without any sort of focus. “Here’s a bunch of cool quotes that Geeks love,” he may have said, “Tell me what you think they mean.”

For example, the book provides the quote from Yoda in The Phantom Menace: "Fear leads to anger; Anger leads to hate; Hate leads to suffering.” About this quote, Geek Wisdom posits:

Yoda was paraphrasing the first great African American geek, George Washington Carver, who said a century ago: "Fear of something is at the root of hate for others, and hate within will eventually destroy the hater."

Carver, a scientist plying his trade in a time when the intellectual inferiority of black people was simply assumed, knew something about suffering. Born into slavery, kidnapped as an infant, threatened repeatedly with lynching throughout his life, and rejected from school after school due to his race, Carver eventually went on to become one of the best-known American researchers in the biological and agricultural sciences.

Widely rumored to be gay, Carver spent his life confronting and overcoming the fears of others, earning an iconic place in geek history. Yoda might be the fictional guru we like to quote, but Carver is the real one whose life reverberates through our culture.

Now compare that to what the book says about Ripley’s quote from the movie Aliens: "I say we take off and nuke the site from orbit."

Movie logic frustrates most geeks. It just doesn't make sense for the people in a horror film to go one by one to investigate that strange noise in the dark - that didn't work out so well for the last five people, did it? It's stupid for the evil overlord to capture the intrepid hero and then leave him alone in a room full of convenient tools; any overlord with a brain would just kill the guy right off. All too often, Hollywood characters choose the more dramatic path through hardship rather than the smart one.

This was why the Alien films were such a breath of fresh air. Ripley, faced with a planetary colony full to overflowing with unstoppably murderous alien beasts, actually understood what she was up against. Never mind trying to safely capture an alien - it wasn't going to happen. Ripley pushed instead for the Occam's Razor method of problem-solving: simple, overwhelming, effective.

Thus "take off and nuke the site from orbit" has become geek shorthand for putting a decisive end to any dangerously messy problem. Overkill? Maybe. But sometimes you just have to be sure.

You can see my issue here, I hope. The writing styles in these two examples seem wildly divergent and have no central thesis upon which to ground the thinking. It is all over the place in terms of pulling quotes and making meaning. Ultimately, it’s not a book at all, rather more like a series of blog posts by different authors who have never met to discuss what it is, exactly, they are doing.

To quote William Butler Yeats (a Geek who is strangely absent from this book):

Turning and turning in the widening gyre
The falcon cannot hear the falconer;
Things fall apart; the centre cannot hold;
Mere anarchy is loosed upon the world,
The blood-dimmed tide is loosed, and everywhere
The ceremony of innocence is drowned;
The best lack all conviction, while the worst
Are full of passionate intensity.

So what are the redemptive aspects of the book? There is that certain geek-out that Geeks get when they encounter some of these quotes out of context (I was particularly pleased to see Ralph Wiggum’s “Me fail English? That’s Unpossible!” and Kurt Vonnegut’s “There’s only one rule that I know of, babies – God damn it, you’ve got to be kind.” included). There is also the community building aspect that comes from seeing all of these quotes you have been mouthing your whole Geeky life be acknowledge as quotes that other Geeks quote too. There is that bonding of shared experience that occurs through reading this book.

All in all, though, Geek Wisdom fails in its mission. It strikes me as a bit pandering, as if its only raison d’être is to make a quick buck off the sudden popularity of Geek culture. While Segal’s Geek credentials are strong (he’s the Hugo-Award winning senior contributing editor to Weird Tales), he bit off more than he could chew here.

Perhaps if the book had a different title then my response to it would have been different. As it is, though, Geek Wisdom: The Sacred Teachings of Nerd Culture is neither wise nor is it sacred.