Author's Note: This column originally appeared on Comics Bulletin
In these economic times, finding inexpensive entertainment is difficult. Thank goodness for the local comic shop and a slew of comics nobody cares about anymore! Each week Daniel Elkin randomly grabs a comic from the bargain bin (for 50 cents) to see what kind of bang he can get for his two-bits. These are those tales. 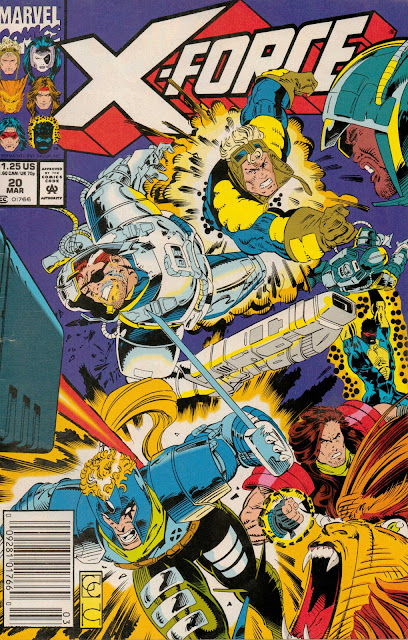 Also in March of 1993, Patti LaBelle got a star on the Hollywood Walk of Fame, Depeche Mode became the first alternative British band to hit number one on America’s Billboard 200, and Whitney Houston made us all bleed from our ears for 14 weeks by screaming I Will Always Love You making it the longest running number one single of all time.

Nintendo released Kirby’s Adventure for the NES, Teenage Mutant Ninja Turtles 3 hit the theaters, Brandon Lee is killed during the filming of The Crow, Beavis and Butt-Head premiers on MTV, and Doogie Howser, MD is finally canceled, all in March of 1993.

Also in March of 1993, Marvel Comics unleashes X-Force #20, which will now be the focus of this column. For this, I apologize in advance.

X-Force #20 opens with this rather confusing mess on its very first page: 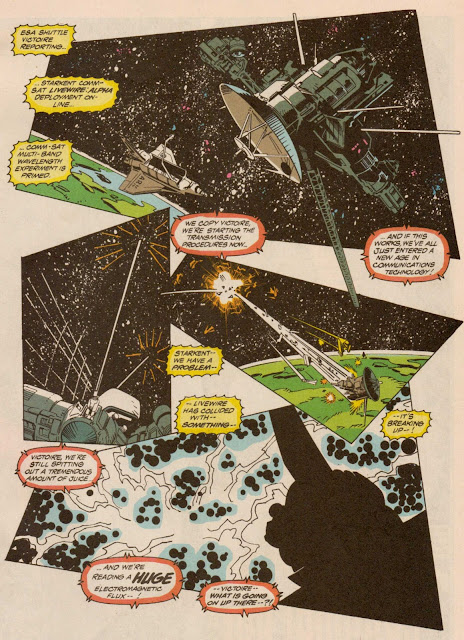 The ESA Shuttle Victoire is deploying the Starkent Comm-Sat Livewire: Alpha, which will ensure that “we’ve all just entered a new age in communications technology!” But a HUGE electromagnetic flux causes problems.

The next page shows the source of the flux. A giant spacecraft appears out of nowhere. It’s a rather impressive two page spread, and I would have loved to share it with you, but it wouldn’t fit on my scanner.

This giant spacecraft appearing out of nowhere and fucking up the new age in communications technology leads to a series of confusing pages which to understand requires a lot of continuity knowledge that I don’t posses. I stopped reading Marvel Comics in the 90’s. Mostly because they sucked.

Somehow Nick Fury from S.H.I.E.L.D and James Rhodes (War Machine) from Stark Enterprises get involved and they all want to poke around on the giant spacecraft. They all seem to think that it has something to do with Cable and is therefore valuable. My guess is they were particularly interested in the physics behind the load bearing properties of tiny feet, as well as the possibility of finding and enormous stash of pouches.

After all that rather confusing and off-putting mishigas, the comic next jumps to “The desolate remains of The Camp Verde Apache Reservation in Arizona” where we see this: 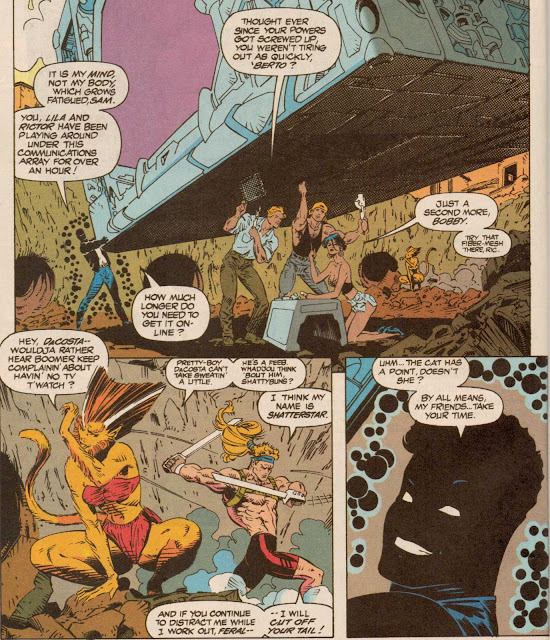 This is X-Force. They have been hiding out here and are “working to call Camp Verde Home.” Why they are in hiding is a complete mystery to me, and the creators of this comic feel they have no obligation to tell me why. It was the 90’s, and I guess I was supposed to know. See what happens when you blink.

So they are fixing this alien communications array and it is not going well. The cat lady, whose name appears to be Feral, is wearing a bikini and licking her fur. She refers to a character as “Shattybuns.” He says, “I think my name is Shatterstar.” 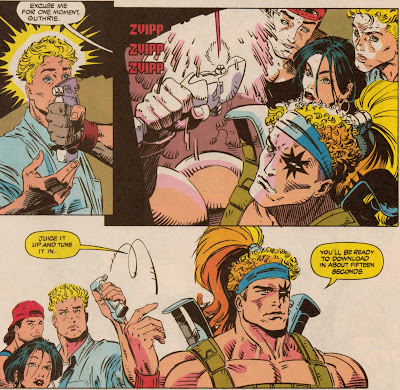 Shattybuns fixes the array with something that goes “Zvipp Zvipp Zvipp”. The blonde guy asks him on the next page why Shatty didn’t tell them that he could fix it, to which Shatty (I really keep wanting to type “Shitty”) replies, “Because you never asked.”

The array works now and the team tunes in to the television show “Hard Copy” (seriously) which tells them about the giant spaceship from the beginning of this comic. The team is convinced that the ship is Graymalkin, which apparently is Cable’s orbital station. The blonde guy, whose name apparently is Sam, wants the team up on that station via teleportation in ten minutes!

On the next page, with a “SHIZZAthmmmVFASH” X-Force appears on the spaceship in full costume looking ready for action and posing rather heroically. All of a sudden, the spaceship starts talking to them, well… to Sam specifically.

They seem to know each other, sort of. The ship wants to be called, “Professor”, but Sam keeps calling it “Ship”. I have no idea what is going on.

Then there are three pages of what I assume is sub-plot crap that has been referenced previously and will probably be developed in later issues. The first page concerns someone named Vanessa who morphs, the second page concerns Domino and Grizzly drinking in an Australian Outback bar, and the third page concerns some old guy named Nicodemus who seems to have suddenly burst into flames. All this does is confuse the shit out of me and alienate me entirely from the story.

Then we return to the main plot, finally, and get to see Nick Fury in space. 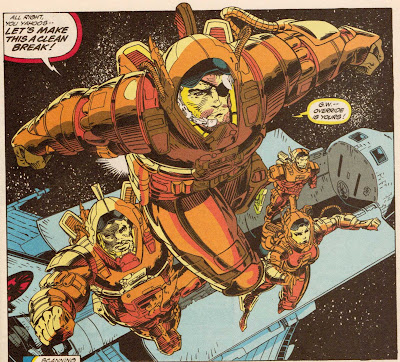 They are on a mission to enter the space ship. They even admit that it is Breaking and Entering. They try to be funny about it. They look very serious. They also look very shiny.

Ship, or Professor, or whatever the fuck its name is, alerts X-Force of the intruders. X-Force doesn’t want S.H.I.E.L.D. to get its hands on the pouches (I guess), so they head off to intercept Fury and his crew as dramatically as they possibly can. 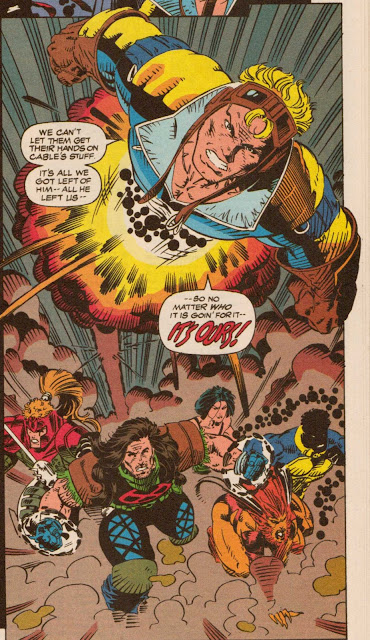 Fury and his similarly shiny partners are wandering about the ship trying to figure out what they are doing there and, as far as I am concerned, coming up empty handed. That doesn’t stop X-Force from getting to have another overly dramatic entrance, though. 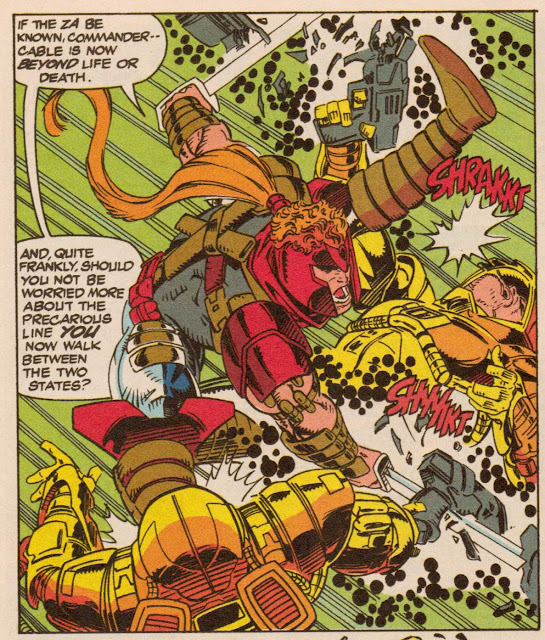 How Shatty is able to do that with his legs is beyond me.

One of Fury’s group realizes how ridiculous this all is, and makes the following comment: 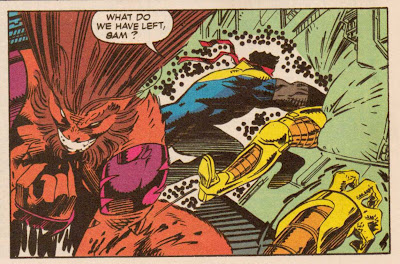 Seriously? One guy is being shoved through the metal of a spaceship, while another guy is being obviously clawed up by a cat in a bikini?

What exactly is going on here? Why is X-Force killing these people?

Anyway, Shatty gets to show us how nimble he is again: 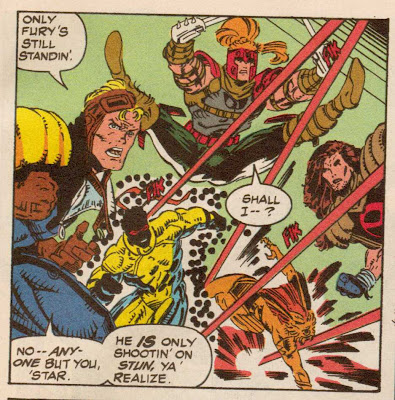 Then Sam and his googles take out Nick Fury with a “SKAPOW!”

Even though they had just seemingly killed a bunch of intruders to keep them from getting anything off of the spaceship, X-Force regroups and Sam decides they had better get out of there “before every Tom, Dick an’ Harry with a Shield I.D., a gun an’ an attitude shows up ta bust our humps.” That is what he said. He really said that.

Of course, then we get the final page of the comic. 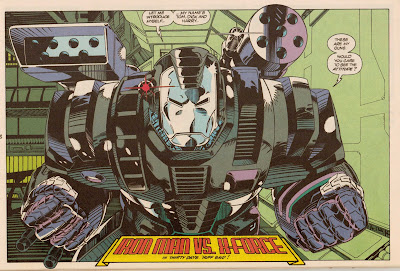 You see what he says here?

As far as I am concerned, nothing about this comic works. In order to really understand what is going on in this comic, there’s all this necessary back story that Nicieza and Capullo fail to provide. The characters they have created have no emotional depth or indistinguishable personality – a matter of fact I have no idea who half of X-Force even was by the end of the book. The art, other than the two page splash of the space ship (once again, blame the limitations of my scanner), is lifeless and ridiculous at times. The story seems to stumble over itself with contradictions and what I guess are sub-plots. And never once did I find myself forgetting that I was reading a shitty comic book.

This comic was a perfect example of what was wrong with comics in the 90’s, and should serve as a lesson for creators today (especially those who are currently making the same mistakes – you know who you are). Comics need to pull in their readers. Comics need to provide escape. Comics need to be fun to read, exciting to be part of, and clever enough to engage.

I think for the first time ever, I really really want my fifty cents back.

And I hate that I had to drag you through this with me.

Sorry. I hope you’ll stick around with me for next week’s column.