Author's Note: This Column originally ran on Comics Bulletin
In these economic times, finding inexpensive entertainment is difficult. Thank goodness for the local comic shop and a slew of comics nobody cares about anymore! Each week Daniel Elkin randomly grabs a comic from the bargain bin (for 50 cents) to see what kind of bang he can get for his two-bits. These are those tales. 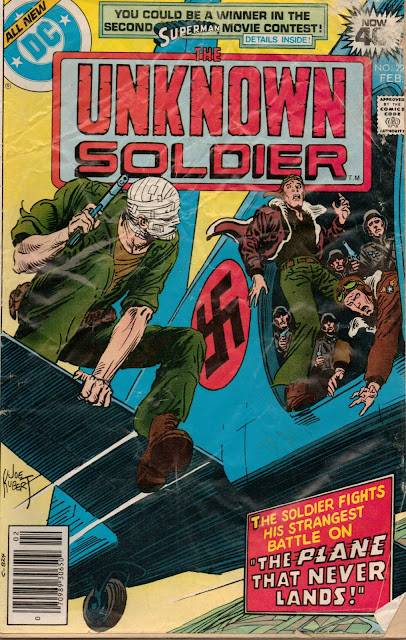 BUT I NEED THE BEST! AND WAR IS NEVER FAIR!
So it’s February, 1979 and you’re trying to figure out the world. Sid Vicious has died, Ayatollah Khomeini has taken power in Iran, Patty Hearst has had her sentence commuted by Jimmy Carter, Rod Stewart’s all over the radio with “Do You Think I’m Sexy”, and Jennifer Love Hewitt is born.

In February 1979, you walk into your local convenience store and there on the spinner rack is The Unknown Soldier #224 from DC Comics. Joe Kubert’s cover art catches your eye, as does the text box in the corner promising you that “The Soldier fights his strangest battle on ‘The Plane That Never Lands!’” You pay your 40 cents for the book (along with whatever a can of Coke and a Snickers Bar cost at that time), walk out the door, and head on home.

You open the first page of the comic and are quickly thrown for a loop. Your excitement to read “The Plane That Never Lands” is quickly supplanted by the confusion you feel by being presented with a story called “Welcome to Valhalla!” 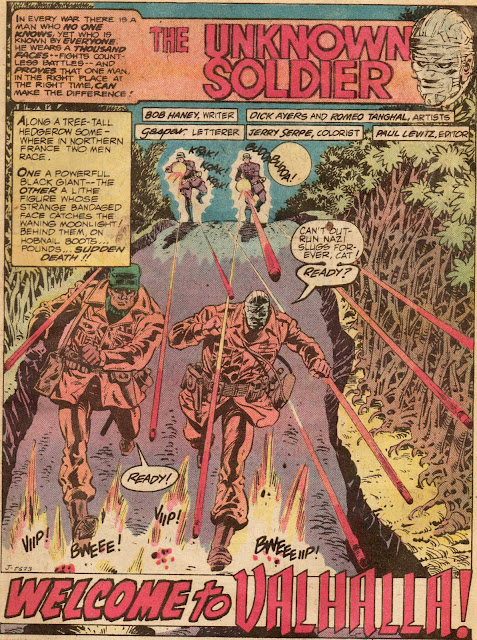 I’m going out on a limb here, but my guess is that the cover of Unknown Solider #224 was done well in advance of the actual comic being released and there was a great deal of miscommunication that went on during this process. By all accounts, Joe Kubert is a wonderful human being and he seems like the type who wouldn’t intentionally lead you astray. Paul Levitz was editor at DC Comics at the time; somebody should ask him what happened here.

Anyway, to the task at hand.

Unknown Soldier #224 opens with a splash page of two guys running down a country road under a hail of bullets. “One a powerful black giant – the other a lithe figure whose strange bandaged face catches the waning moonlight!” The “powerful black giant” is Cat, and the “lithe figure” is our hero, the Unknown Soldier (hereafter referred to as US). Nazis are shooting at them. Nobody likes to be shot at, especially by Nazis.

So Cat and US take matters into their own hands. 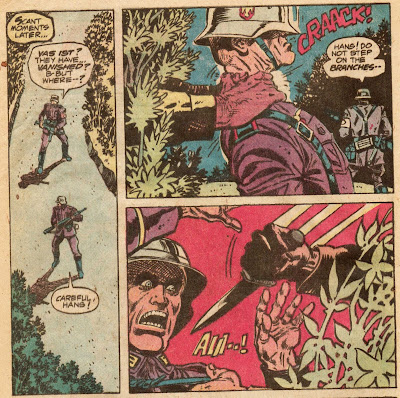 Apparently Nazis are very fragile. The Swastika is actually a universal symbol for “Handle with Care” (I’m kidding. I hate Nazis. Please feel free to break them all you want).

After dealing with those pesky Nazis, US catches up with his “Pick-Up Sub” on the shore and tells Cat to stay alert. “There definitely is something WEIRD going on in this area,” he tells Cat.

Back in “The Secret Command Center of the Allied Bomber Fleets, deep underground,” US tells a General that he cannot account for all the missing planes that have disappeared in “The Zero Zone.” Two dozen planes have been lost in this area in recent weeks, but US could find no wreckage, enemy fighter bases, or Ack-Ack Batteries anywhere in the Zone.

Unfortunately for me, this is the only time in this comic that anyone refers to an Ack-Ack Battery. I cannot describe to you the joy I feel every time I say “Ack-Ack Battery.” Oh well, as with all the great joys in my life, this one too is but fleeting.

US decides to check out a hunch he has about the Zone, and tags along in a “British Beaufort Nightfighter”. A half an hour later they spot an American B-17 Bomber. 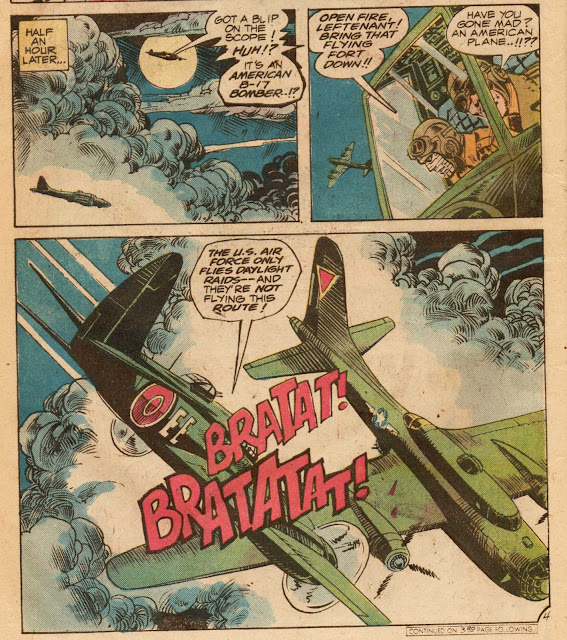 World War II seems to have been a very organized war with very strict rules. Americans never went on bombing routes at night? This rule was so hard and fast that if you saw an American bomber flying at night you could start shooting at it? Did everyone know this?

So they shoot the plane’s tail to shreds and the B-17 lands gently on the conveniently flat field below. US and the Beaufort Nightfighter’s pilot “clamber” into the bomber. 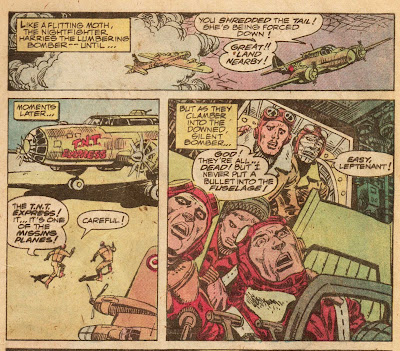 With everyone on board dead, this scene raises some questions about how the bomber landed safely, but I suspend my disbelief in the name of entertainment and keep rolling with this story.

US then does what he does in every issue apparently, he dons a disguise. This time he is a chap named Captain Hall and he’s got an excellent mustache.

US/Captain Hall commandeers the Dixie Bell (a bomber) from a Colonel at an American Bomber Base. The crewmen of the Dixie Bell are some of the best, having flown “fifty killer missions over Nazi-Land!”


(As an aside, Nazi-Land is one of the worst theme parks ever conceived)
The American Colonel tells the US/Captain Hall that the crew should be going home, not flying a suicide mission. To this the US/Captain Hall responds emphatically, “I know Colonel! But I need the BEST! And war is NEVER FAIR!”

War is never fair. This is, I believe, the “take-away” line from the book. As weird and unbelievable as the story gets (and it does, dear reader, just wait), this is a truism that transcends all arguments to the contrary. The very act of organized sanctioned killing for political/religious/resource allocation reasons is a moral gray area. The idea of “fairness” cannot enter the picture.

This is a comic book about war. In this comic there are clearly defined heroes and villains. To the victor go the spoils and to the loser goes the ignominy. Due to the outcome of the war, it is the popular group-think to portray Nazis as villains (for a myriad of very good reasons). Had the tide turned the other way in the 1940’s, this would not be the case. The concept of fairness does not apply.

So US conscripts the crew of the Dixie Belle to enter the Zero Zone. In the middle of the Zone is The Abbey of St. Etienne, “one of the wonders of the Western World!” The Abby has been declared off limits for bombing or military use by both sides (how very civilized – war is odd), but the Soldier is suspicious, especially “where Hitler’s concerned.” 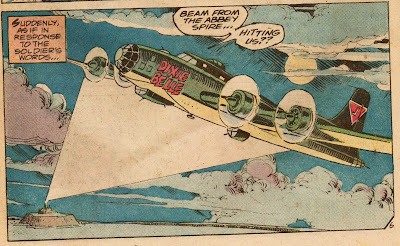 Where’s Obi-Wan when you need him?

So, who is the amazing scientific genius that is able to build a tractor beam that can pull a Bomber out of the sky? 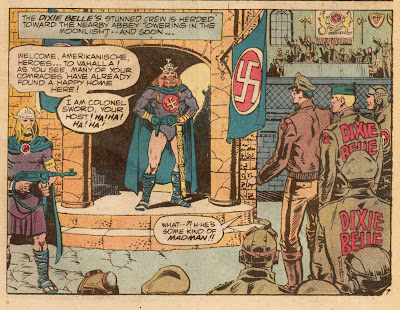 A Nazi Viking in a crotch hugging ensemble who believes he lives in Valhalla. Oh Colonel Sword, your outfit makes your name a double-entendre….

Now I just want to recap before continuing. Allied planes have gone missing in the Zero Zone. Their disappearance is the result of a tractor beam built by a Nazi Viking. I need us all on the same page here.

So what are the Nazi Vikings doing with the Allied planes and crews after they have captured them? They are turning them into Nazis (of course). They do this through the use of mind control drugs and tech stolen from Clockwork Orange and Room 23. 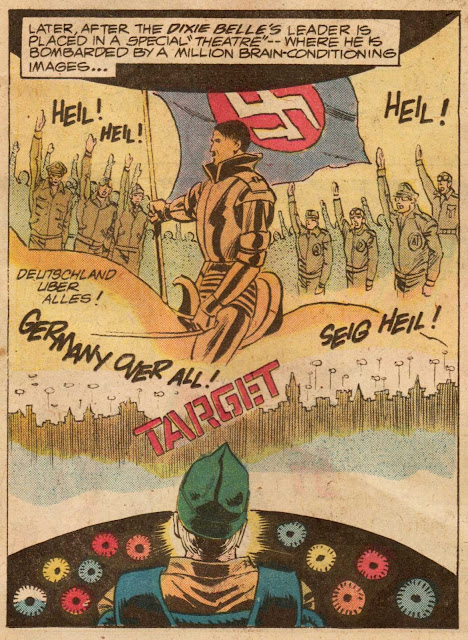 Luckily, US has had training which “included developing a resistance to brainwashing drugs” (which would make him a great Dread Pirate Roberts), and he is therefore unaffected by the Nazi-Vikings’ attempts to sway him to their side.

With the supposition that the reader will suspend his or her disbelief, US is able to sneak out of the Abby one night using a torn up parachute, find his old buddy Cat (remember him), and tell him about what is going on with the Nazi Vikings.

And what is going on with the Nazi Vikings? 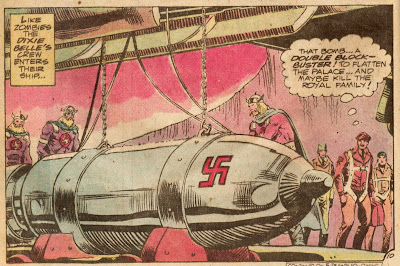 The newly Nazi crew of the Dixie Belle is going to bomb the crap out of Buckingham Palace.

Shortly thereafter, the crew of the Dixie Bell takes off on their mission with US aboard. As they near “the outskirts of the bomb-battered but unbowed British capital” (gotta love the alliteration there – thank you, Bob Haney), they realize their plans have been thwarted. 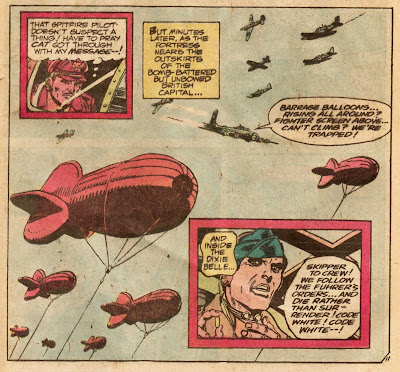 Code White apparently means that the entire crew ingests cyanide capsules. US, though, has switched their cyanide for sugar pills, which, for some reason he feels compelled to tell them.

As they are now brainwashed into fanatical Nazis, the crew reacts violently to this news and tries to throw US out of the plane. 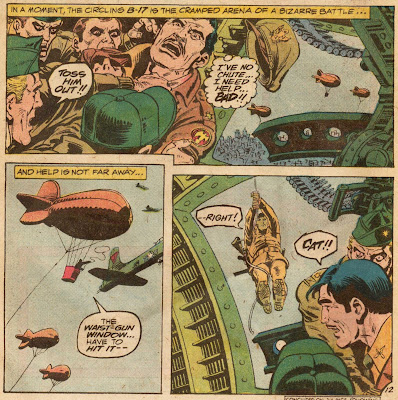 Ok. Did you see what Cat did there? From a moored Barrage Balloon, he somehow lassos the flying Bomber (which has a cruise speed of approximately 180 miles per hour) and is then able to swing right into the Waist-Gun window. The physics of this are mind-melting at best, but as I have suspended my disbelief so much already to read this comic, I say, “WAAAAAHOOOOO! Try that, Indiana Jones!”

Cat and US make quick work of the Dixie Belle Crew. 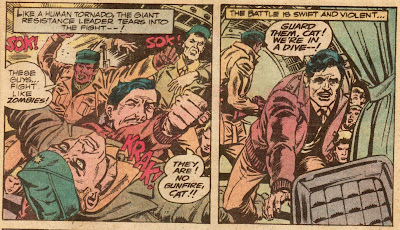 US is able to land the plan safely after that.

Two days later, the Allied forces ignore their previous agreement and bomb the crap out of the Abby of St. Etienne and its Nazi Viking inhabitants. While one might supposed that the Allies would be keen to get their hands on a Nazi Viking created tractor beam, there is no mention of any tech recovery. All we get is this final panel.

And that’s a wrap. No pun intended (Unknown Soldier… bandages on his face… get it?).

All in all, this was a pretty fun comic to read. While it did take some serious suspension of disbelief, there was a clarity of purpose to the plot. Nazis (especially Viking Nazis) are bad. They also have really cool technology. The Allied forces are good. They are also clever enough to outmaneuver any advantage technology may give the Nazis. Good will always triumph over bad, even if the laws of physics must be broken to do so.

And war is not fair.

I don’t know if I would have paid more than 50 cents for this comic, but the 10 minutes it took me to read it cover to cover provided a nice escape from all the horrors of the current world and its muddy morality. Sometimes the act of suspending disbelief is very soothing in a Zen-like kind of way.

I like that The Unknown Soldier #224 was a self-contained story. I like that there was a degree of intrigue to the plot, as well as action.

And I especially like that Nazi Vikings blowed up real good at the end.


See you next week.