Matt Vadnais on Gareth A. Hopkins’ PETRICHOR and the Trouble with New Ideas 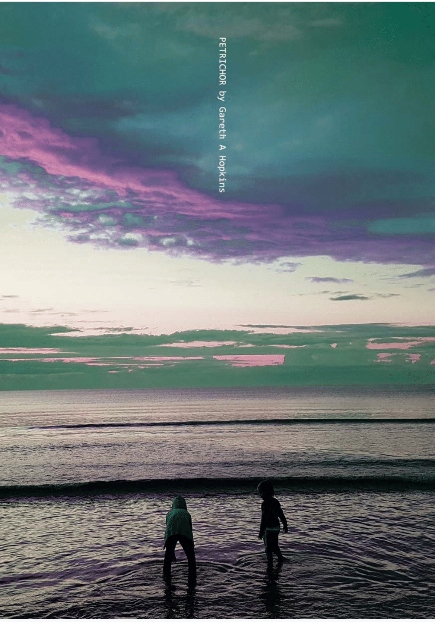 One of the very first scenes we get in Gareth A. Hopkins’ PETRICHOR mentions spending an afternoon in a Modernist art gallery. Though we see many panels that appear to have been inspired by Modernist approaches to representation – which is to say close-ups and shapes and movement where we might expect identifiably things – we don’t get a rendering of the scene itself. This is not a surprise for readers familiar with Hopkins’s brand of abstract comics; in fact, mentioning the Modernists as an influence is more of a clue regarding what one is to do with the images than he often provides. Modernism, in the visual arts at least – though there were similar things happening in literature, philosophy, and even chess – got its name in the context of a supposed revolution of ideas, overturning classical notions of one-point perspective and a variety of other methods of artistic training and techniques of representation in the favor of, for example, Cubist attempts to record all of the images of an object being reflected by light in every direction at the same time.

According to one notion of Postmodernism, Modernist complications of the idea that art was to record the world as it looked from a single perspective gave way to post-modern skepticism that a single perspective could see the world at all. Even as Petrichor is rendered in a visual idiom frequently more in-touch with the moderns than much of Hopkins’s work, he still creates pages that feel skeptical of the notion that anyone can actually draw the world. Though the book often includes shapes suggestive of buildings and stairways, they are frequently fractured or otherwise fragmented to a point where any attempt to fit them together into a meaningful representation of something specific would be impossible.

And yet, the title of Petrichor refers to the specific smell immediately following the rain after a long period of intense heat. Few things are more personal or more closely linked to individual memory than the sense of smell. To create a book that draws on Modernist and post-modern apprehension regarding the relationship between art and the real world in service of a comic ostensibly defined by a hyper-specific smell is brilliantly paradoxical: the comic that refuses to even attempt to show us depictions of the scenes it narrates – the author in a meeting, the author receiving news that someone he was once close to has died, the author with his family on the first day holiday – draws its name from a word that suggests that everyone would experiences a similar moment in the same, deeply personal way. 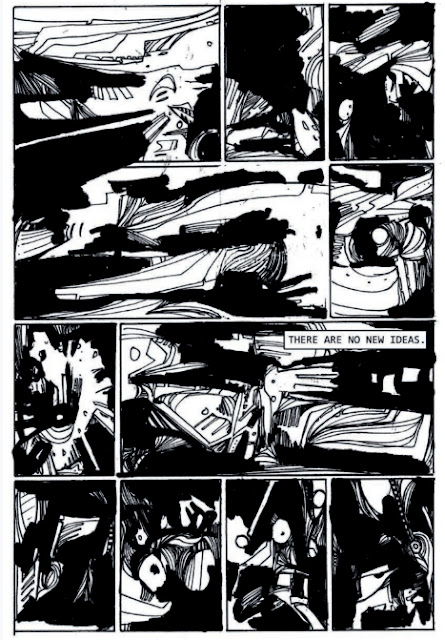 As the art loops and meanders with images that involve spirals and what look potentially like stairs, it occasionally returns to a nearly identical page layout, adding an additional color with every loop. Identical sentences, hinting at the scenes described above, repeat. Hopkins tells us, multiple times that “there are no new ideas.” Unlike his art that attempts to evoke things through unlikely juxtaposition and the forwarding of a new or at least highly individualized notion of how comic panels and images work, his text suggests such novelty is impossible. Like petrichor, a smell that has been documented since the origin of the word thousands of years ago, no idea – no matter how personal – is new. In other words, Hopkins decries the existence of original cognition against a backdrop that provides evidence of what sure appears to be original cognition in the form of artistic composition.

One way that Hopkins utilizes this paradox, as the comic progresses and loops its way into more boldly colored pages, has to do with subjectivity itself. “It’s easy to forget how many times you’ve fallen in love,” he says multiple times; the statement colors the pseudo-scene in which he feels unexpected grief upon learning that someone he knew intensely, if briefly, has died, suggesting that he indeed fell in love with her. However, the sentence is also colored by the one that came on a previous page – “there are no new ideas” – suggesting that the supposedly unique experience of falling in love with a specific person is so fully framed by one’s previous experience with love that each iteration becomes impossible to remember. The suggestion that our experiences of individual moments are all derivative of previous experiences of previous moments applies to each of the specific emotional moments described by the narration – rendered in language that would appear to be describing a unique experience – that Hopkins uses to evoke the boredom of an office meeting and joy of a beach scene. No idea – not even the most surprising emotion or cognition – is new for a brain that is constantly understanding the new in the context of the previously experienced. 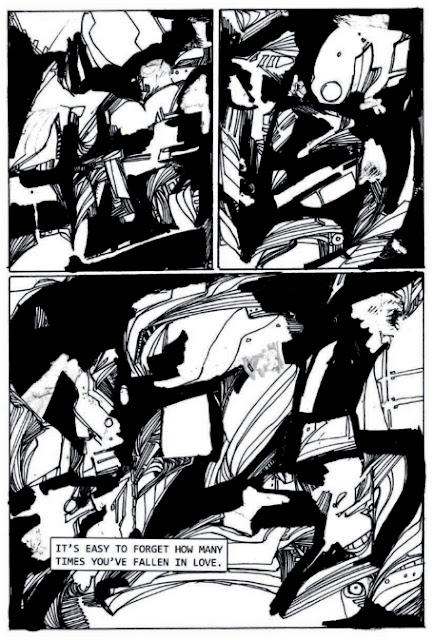 And yet, as troubling as it is to suggest that the purest or most memorable moments of one’s life are rendered in a mental or emotional language that is derivative of previous experiences, the comic goes a step further in troubling the notion of newness. In addition to depicting the dissonance created by Modernist art supporting the idea that there are no new ideas as a dissonance that happens in one’s own brain, Hopkins suggests that the lack of new ideas extends to the world as a whole. By juxtaposing deeply personal moments, art drawing on techniques meant to undermine traditional ways of representing reality, and a very old word for a specific smell, Petrichor suggests that Modernism itself – and its supposed revolution of the foundations regarding art, literature, philosophy,  and even chess – was never new. Many of the objects described by the narration are distinctly modern: computers, traffic, offices. And yet, “there are no new ideas.”

In other words, though a reader might be tempted to attribute the kind of emotional alienation of the self that Petrichor describes to the contemporary world and the particular ennui created by its social media and constant noise, Petrichor itself suggests that this is a mistake. Even our observations of the potentially redundant nature of experiencing individual moments of clarity or meaning or love aren’t new. Like the smell created by rain after a long stretch of heat, the awful realization “that it’s easy to forget how many times you’ve fallen in love” is one that has existed long before one personally experiences it. 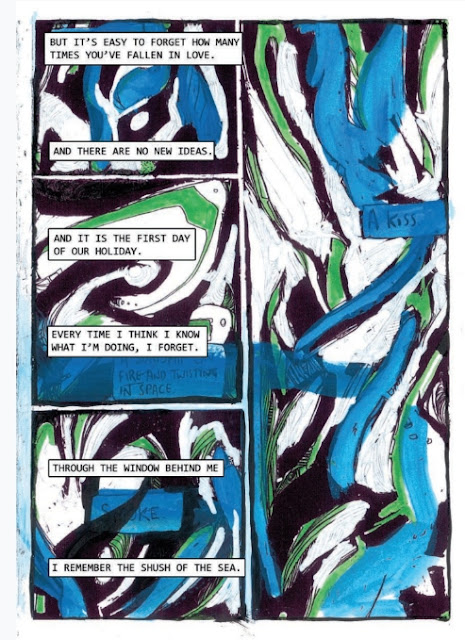 The question for Petrichor, then, is whether or not newness matters in the face of something feeling undeniably present or meaningful. Does alienation from the self – the subject of so much art and music right now – mean any less if it also existed in the time of the Greeks? Do the ideas that drove Cubist attempts to depict an object from every direction simultaneously matter any less if they were little more than specific iterations of things previously experienced and contemplated? Is the smell right after the rain starts any less potent if it has already been named?

My personal – and, if we can believe Petrichor, definitely not new – experience of the comic suggests that the answer to each of the above questions is yes. When confronted with something as potent as the smell described by the titular word or a work like Petrichor, I find myself feeling and reveling in evidence that contradicts the work’s thesis statement. Even if the feeling of newness is itself something that can’t be new, it is a feeling.