Death as a Political Mission: Matt Vadnais on FUTURE CORPSE by Eva Müller 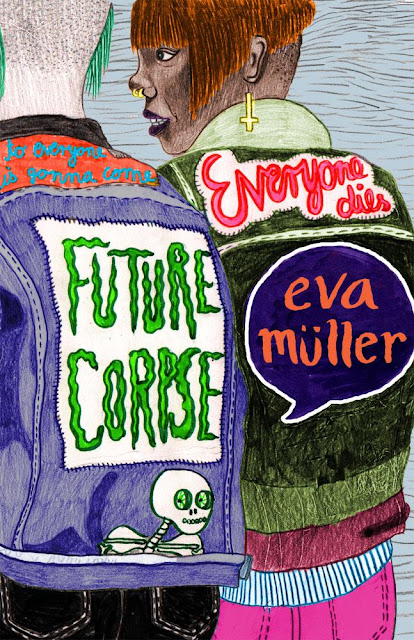 In the Future, We are Dead, Eva Müller’s astonishingly morbid treatment of anxiety, artfully avoids narrative and conflict in an effort to thwart futurity and the certainty that any life lived as a linear progression of events must conclude with death. While her most recent comic Future Corpse bears a title that would suggest similar preoccupations and stalling tactics – and it is certainly marked by the same anxiety that permeates In the Future, We are Dead,  including a scene in which Müller graphically and painfully swallows a Japanese anxiety snake – the game has changed. Built from even smaller and increasingly narrative-resistant snippets than its thematic cousin, Future Corpse attempts to solve the problem of futurity by reconfiguring death in socio-economic terms, positioning death as the ultimate defeat of capitalism. 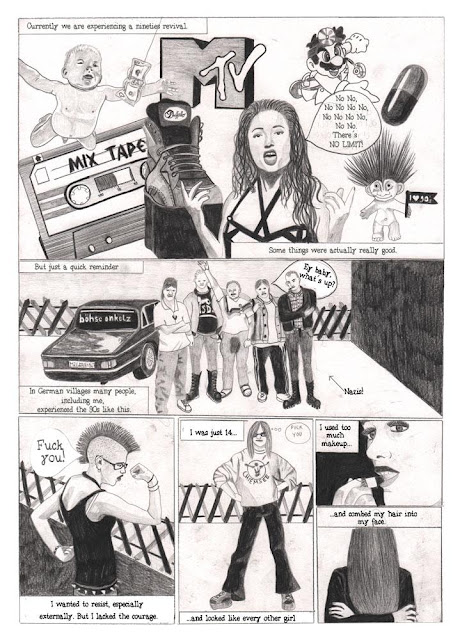 Part of this is punk rock, an aesthetic so woven into about a third of the art and subject matter of the book that there is a pierced-tongue-in-cheek quality to this suggestion. However, the assertion that we (those of us interested in escaping the surly hands of an economic system based on a zero-sum game) will finally win when we are dead also comes off as earnest, particularly in the context of Müller’s last book. If obfuscation, denial, and the meta-creation of a terrific comic weren’t enough to soften the blow of knowing that, eventually, the future is death, why not focus on the fact that the future at least promises an escape from menial labors and the slings and arrows of outrageous economic inequity? Clearly, given the snake swallowing that occupies a very important segment of the comic, this tactic isn’t a viable long term option, but it makes Future Corpse a satisfying coda to In the Future – one that displays a wider variety of art styles, ranging from poster layouts and something approaching one-point perspective realism to nostalgic figure drawing and even a black and white motion rendering of a Roomba vacuuming what may well be a deserted house – that offers an alternative to (or at least an alternative form of) denial.

The image of a Roomba vrooming about a house, passing in front of what appears to be a stone animal, is mostly unexplained; juxtaposed with a very funny series of panels in which Marx buys groceries, the Roomba page seems to represent robotic labor, particularly in the absence of humans on account of their inevitable death, as the end (or at least inevitable conclusion) of capitalism. Perhaps this is the real difference between this terrific comic and Müller’s last (very similarly titled and themed) terrific comic: the narrative bits composing In The Future were framed as thoughtful distractions where, here, even if they do some of the same work, they are taken seriously on their own merit. The threads that stitch these scenes together may look a lot like the anxiety snake she eventually swallows, but they are also the threads of an argument about labor. 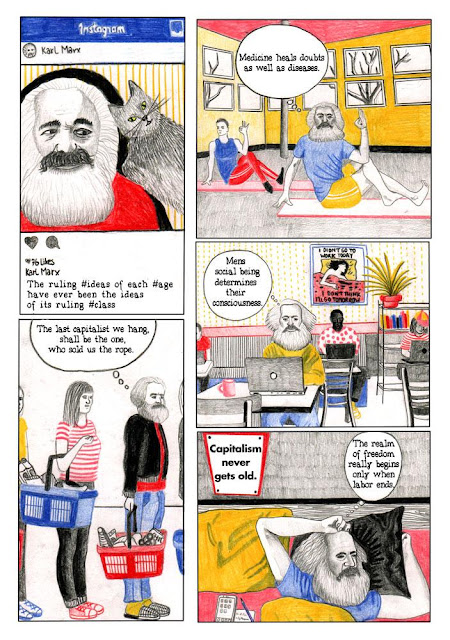 Both scenes – the snake and the Roomba – are depicted in black and white, drained of the brilliant colors that mark the sections depicting Müller becoming a better punk and Marx becoming a better consumer. The connection between anxiety and the image of the person-less labor might undermine my reading of the comic as thinking about that absence as an improvement. However, it’s worth considering anxiety as a generative process: the comic appears to be likening anxieties about a labor-less future and one that ends in death, not necessarily condemning either outcome. In any case, both scenes are united by more than color or the lack thereof: both are studies in motion and stillness. 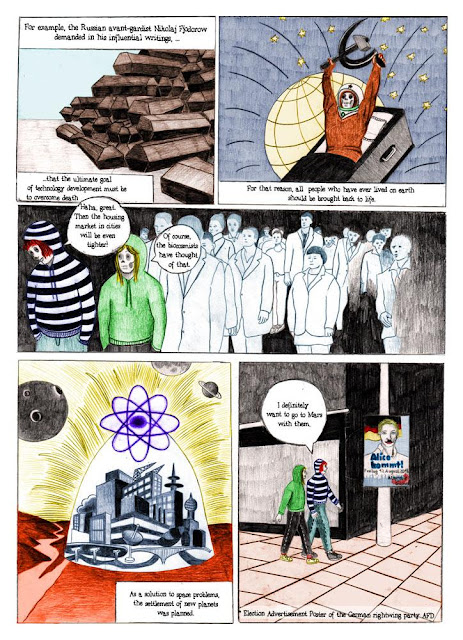 While Future Corpse is as occupied by anxiety and trepidation as Müller’s last book, that anxiety itself is reframed slightly here as anticipation. This book is framed by images as ideology including the aggressive and potentially naïve sloganeering of punk patches. However, some of the most exuberant pro-death rhetoric is featured on pages that are laid out to resemble Communist propaganda posters, drawing attention to the relationship between the word corpse and a corps. The comic configures our shared futurity as joining a force for the betterment of the world. Even if this doesn’t prevent – or perhaps induces or is akin to – the author swallowing the anxiety snake, the suggestion that we will do our most important work when we are no longer capable of working at all is one that lingers in the belly like an ingested serpent.