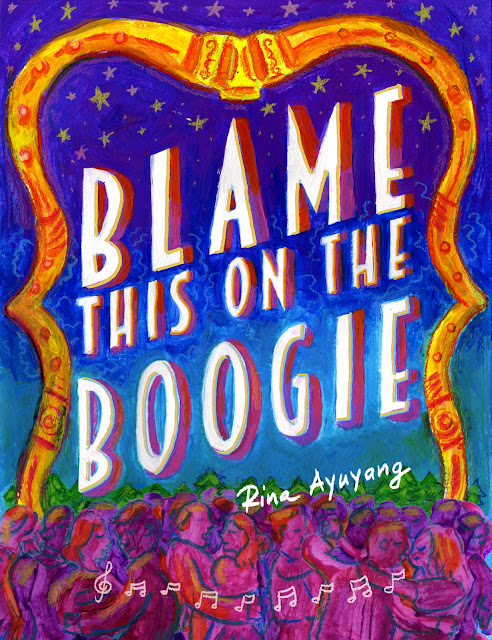 On the surface, Rina Ayuyang's autobiographical vignettes in her book Blame This On The Boogie (Drawn and Quarterly, 2018) are breezier than most memoir comics. She grew up in a loving family and still gets to see them all the time. She has a wonderful life in the Bay Area with her husband and son. She has lots of passionate interests and has the time and opportunity to obsess over them in amusing ways. A deeper reading of the book, though, reveals that her hobbies are a way of coping with anxiety. Her family has long been a bulwark against creeping depression, aiding her in coping with racism. There's also a larger theme of how being a part of a team can provide an individual with the kind of support needed to overcome life's obstacles.

The tone of Blame This On The Boogie is upbeat and funny. Ayuyang clearly loves to poke fun at her family and friends, but she also depicts them giving as good as they get. Her parents emigrated from the Philippines to America, and Ayuyang grew up very Americanized, even as her classmates often bullied her for her ethnicity and made her feel like an outsider. The first half of Blame This On The Boogie covers her childhood in Pittsburgh as the youngest of four children. From the very beginning of the book, Ayuyang goes all-in on creating a vividly bright world using colored pencils. Considering that she started her career working in an intense woodcut style, it was interesting to see her embrace this radiant use of color. Make no mistake — it wasn't just the use of color that is significant but also the clearly scrawled-out quality of her coloring. It is obvious that the visceral quality of the coloring is a feature of what she is doing, complementing her cartoony line while granting the entire project a childlike sense of wonder. 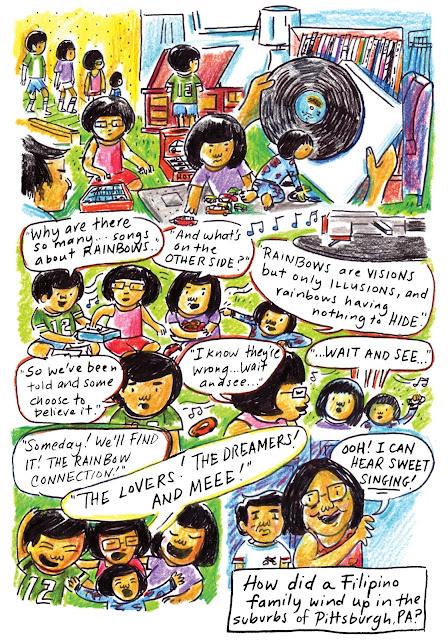 That use of color also had a specific purpose: creating a slightly wobbly version of reality where fantasy elements can be introduced without disturbing the visual continuity of the story. In particular, Ayuyang makes use of this in depicting one of the key running themes in the book: her love of dance. After a long section that introduces her family, Ayuyang notably uses a disco dance routine by her godparents to frame the title section of the book. It's a deliberately cinematic move, one of many in the book. When young Ayuyang is introduced to the films of Fred Astaire as a child, she's hooked by the artistry, the pageantry and the choreography of the dance routines. The sheer joy of those films, along with the frequent dance parties she had with her older sisters, was a counterpoint to her mostly miserable experience in Catholic school. As well as being taunted by other kids for being Asian, her teachers terrorized her.

Ayuyang uses dance as a visual motif signifying transitions and time moving on. It's the most essential form of sequential art: following a body moving through space and time. She simply uses that motion as a metaphor, especially in the second half of the book. The first half of the book is all about her experience as the youngest member of the family, being part of this team that loved and aggravated each other in equal measure, and finally winding up being together with all of them again in San Francisco when her siblings moved there, one by one. The final page of the first half has them at a big table in a restaurant, jabbering at each other. Everyone's married and babies are on the way. It's a perfect pivot point.
The second half of Blame This On The Boogie is a series of smaller vignettes that center around Ayuyang's new life as a mother. Much of the book focuses on the mixture of joy and anxiety she feels in watching her son, Finn, grow up as a fun-loving, popular kid in school. She's relieved that he loves school so much and does so well there, but she's constantly waiting for the other shoe to drop. There's also a focus of time flipping by too quickly, as she despairs at not being able to stay in the moment and enjoy being a mother. There is guilt about doing her comics and any activity that takes her away from her family, but there is also a sense of accomplishment when she gets her fledgling publishing company off the ground. 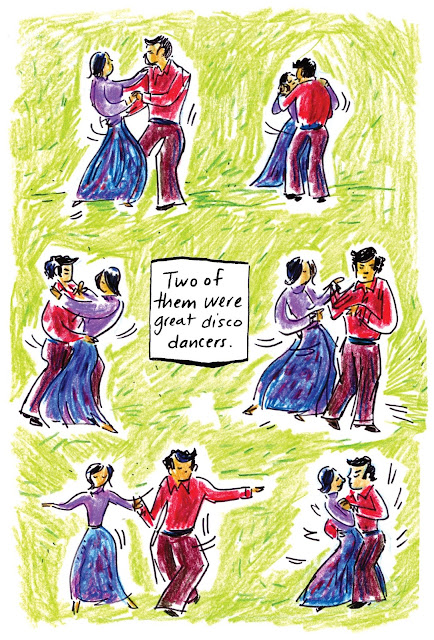 Working in the present tense means that Ayuyang also focuses on her anxiety and occasional bouts with depression. She's anxious about maintaining her career as an artist. She feels like a failure as a mother, especially in the early going. That's when she reaches out to the world of dance once more, becoming a superfan of the TV show Dancing With The Stars because of the presence of former Pittsburgh Steeler Hines Ward. The world of the show becomes her world via the internet, as even her son and husband get swept along with her fervor. Her response to Ward's dance routines with his partner Kym reaches a level of intensity that's almost childlike. It takes her back to her love of Steelers’ football as well as the dance routines of her youth, and the competitive nature of the program only heightens her excitement.

Seeing a live taping of the show with her relatives closes a loop for her, both as the logical outcome of her fandom as well as making her interest that much more personal and visceral. She gets to see "The Big Show" and experience life as a series of dramatic moments that nonetheless stack up neatly. It is another of many pivot moments in the book, as though she starts one dance, ends it, and then smoothly transitions into a different routine. That sense of rhythm is life-sustaining in Blame This On The Boogie. It gives Ayuyang a pattern she can follow and emulate. It gives her life structure and a respite for her anxiety. It allows her to think of the time slipping away from her as another act to savor and remember, even though "It's hard to reminisce when memories are constantly being replaced by new ones." 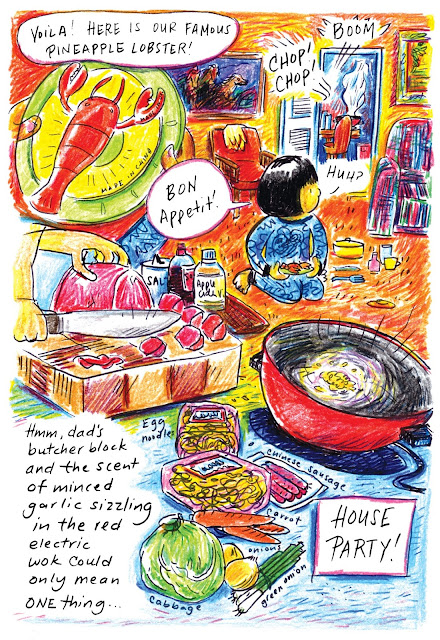 Ayuyang's comic timing is sharp. One thing that's clear is that every member of her family is a champion shit-talker, giving as good as they get. While this level of aggressiveness (albeit affectionate) can be annoying, it's also fodder for all kinds of witty banter. She and her friend Josh Frankel have a number of hilarious exchanges when he calls her out for spending so much time on Facebook on a group dedicated to Hines Ward and Kym Johnson. Ayuyang usually makes herself the target of her jokes, even as she sputters in trying to defend herself. It contributes to the book's breezy, fast pace. On every page, Ayuyang either lands a joke or draws people in motion as a way of keeping the book away from simple talking heads.

How do movie musicals end? With a show-stopping finale, of course. That's just what Ayuyang does here, as we see Finn dancing like his mother through life. When she walks away after dropping him off at his beloved school, she dissolves into a series of colorful squiggles that emphasize pure form and movement. This eventually coalesces into her reappearing with her husband in a choreographed series of movements in a restaurant and a Busby Berkeley- style fantasy sequence involving Ayuyang in a fancy outfit and a giant fountain. After stepping away from that fantasy, she's joined by her husband, her family … and ... Hines Ward in a giant group dance number that ends the book. It's a funny and charming sequence that is a lovely ode to the sort of Stanley Donen musicals she references in Blame This On The Boogie. Reality flips into something else for just a few precious moments to be savored. Moreover, musicals traditionally have people break out into song and dance numbers when their emotions are simply too powerful to express otherwise. For Ayuyang, thinking about dance and music gave her emotions and anxieties a much-needed outlet as a child. Being able to share that love of dance & music with her family served to strengthen her bond with them. As she started her own family, dance and musicals helped with different anxieties, especially surrounding her son. Her fears that he would suffer from similar kinds of problems that she did hung over her, but the reality is that he possesses her same upbeat personality and love of dance and movement. He sees the world as she does: a constant, shifting series of beautiful miracles, only he doesn't have the same level of anxiety or have to face the same sort of difficulties as she did at this stage of his life. It's that realization that kicks off the final "dance number" in the book: a celebration of everyone in her life who's on her team.