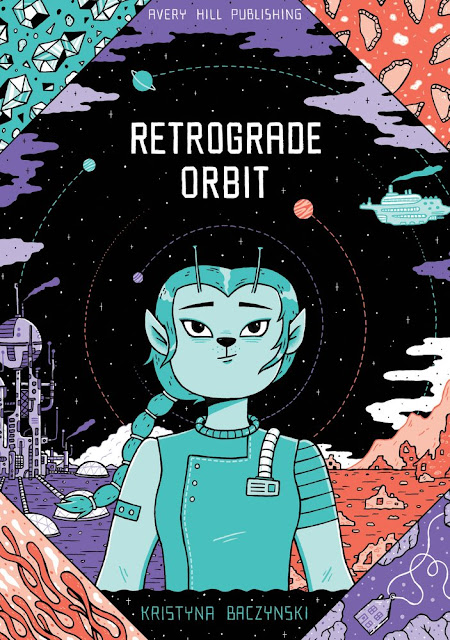 Kristyna Baczynski's debut book, Retrograde Orbit (published by Avery Hill), asks the question, what is home for an immigrant? This is obviously a timely issue, but Baczynski is able to bring this science-fiction story to life on its own terms, not just as a metaphor.

Immigration stories are personal narratives, handed down across generations. That's one reason why they're so effective and also why a story about one family can stand in for many others. The more specific the details, the more relatable it can be. That's because even though cultural details vary from group to group, what is true is that every culture has its own particular set of practices, beliefs, food, and overarching practices. Specificity is crucial because it allows different cultures to simply substitute their own details when thinking about the story, whereas a more generic story doesn't have that kind of hook.

Retrograde Orbit is about three generations of women from a planet called Doma. The grandmother (Baba) had to flee as a child because of a nuclear war. As the story begins, her daughter has just left her husband and took her young daughter with her. The girl is named Flint and has an affinity for her never-seen home planet that draws rebukes from her teachers and scorn from her classmates. Flint's mom has a job as a miner and later gets her daughter a job as one as well. Flint's mom is the sort of person who lives in the moment, making the best of her life. Doma was never home to her. Flint, on the other hand, feels unmoored and nostalgic for something she never even experienced, and this creates the book's central conflict. 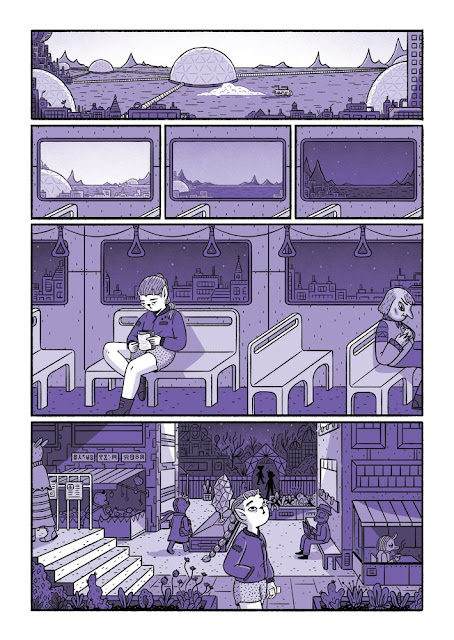 Baczynski’s main storytelling device is jumping through time a few years from chapter to chapter, accompanied by a color shift. It's a clever device, since it's a literal redshift, starting from green, going to teal, to light purple, to dark purple, to red-purple and then to red. Redshift occurs when observing an object moving away from the observer. In this case, the color shift is a reflection of the way Flint starts distancing herself from her adopted planet and everyone on it, but most especially her mother.

Flint experiments with a number of different paths in trying to find herself. She spends time with her best friend and his family but realizes that she'll never truly be one of them. She sleeps around some and clearly finds that to be unsatisfying. She studies texts about Doma in secret, but that only makes her yearn for it more. She reaches out to her father and realizes that he's not going to help with that yearning in her heart, either. That redshift starts to stretch, and it's not just stretching out over time. She's being stretched further and further away from feeling rooted and centered. Flint wants to go home and find her purpose, but that seems like an impossible dream. 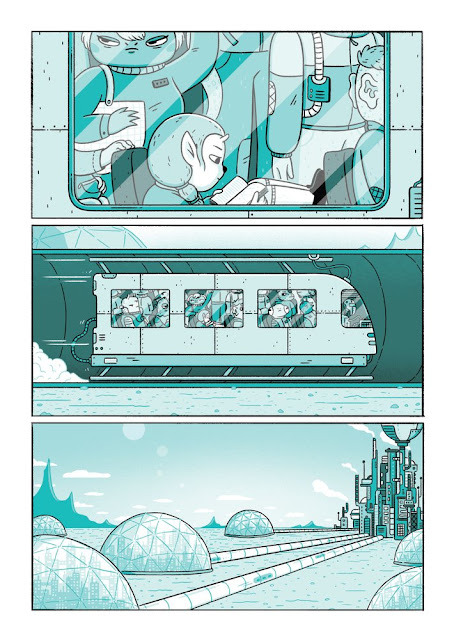 The turning point of the book is when Flint learns that workers get communication credits, something that her mother kept from her. Flint resents this but also understands that her mom didn't want her trying to contact dead air, night after night--which is exactly what Flint does. The one moment in the book that feels contrived is the dramatic moment when Flint's mother and grandmother scrape up the money to help Flint get her own place, an act which would mean setting down roots. At that very moment, Flint hears a voice over her communicator, indicating that life survived on Doma. This scene feels contrived because Baczynski is so careful to avoid that kind of coincidence in the rest of the book, as Flint was trying to find meaning in her life. Having this pop up just as she faces a life-altering decision feels too convenient. That she then wavers on going to Doma feels even more contrived, until her mother gives her the money to go because "It's for a place of your own. Wherever that is." This is a nice sentiment that repairs the gap between them, but it once again feels a bit pat after her mother's opposition throughout the book.

Baczynski's stylish art is key in establishing the emotional and chronological narratives. While the colors in Retrograde Orbit are beautiful and play a key part of the story's emotional narrative, Baczysnki's clear-line style is gorgeous on page after page. That's especially true regarding her character design, as she clearly thought out the appearance of the many alien races that appear in the book. The warmth of her storytelling is stretched by the weirdness of so many of the different races, which is indeed something that was central to the story's metaphor. While Flint faces prejudice from others growing up, Baczynski makes it clear that this isn’t why Flint wants to leave. Indeed, Flint is happy with her friendships and relationships. She just isn’t happy overall with her life. Like the title of the book suggests, everyone on the planet goes one way and she goes in the opposite direction. It isn’t her choice to be born on this world, but she is given the choice to return to her roots. Baczynski also makes it clear that this decision is a personal one on the part of Flint, not the "right" one. Her mother is happy on her new planet. It is home to her. The question at hand is one of choice and fit, and in the end, both characters find that fit. 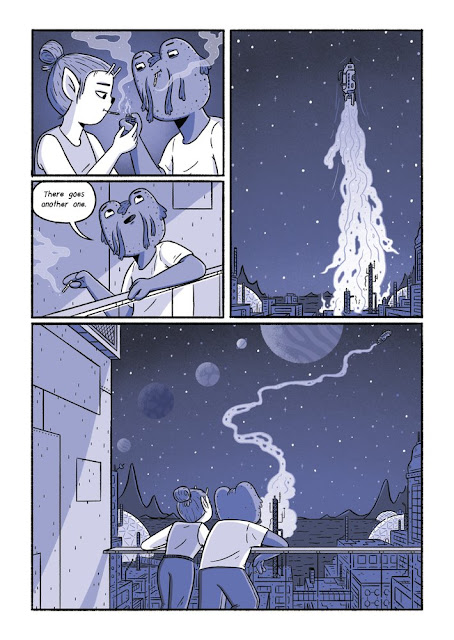 If the climax feels contrived, then the denouement finds Baczynski righting the ship. There's a beautiful series of pages as Flint hops from planet to planet, showing off on a grander scale the kind of detail Baczynski has packed into every page. Baczysnki's line is put into service to make Flint's adopted world feel lived in. It is jammed with the sort of detail that can make cities come alive, from the utilitarian shape of buildings to vegetation to job sites. It is mundane detail for the most part, but Baczynski nailed the confusion on the part of Flint's mom as to why her daughter wants to leave because there is so much there to enjoy. The end of Retrograde Orbit reunites Flint with her mother, but it also reinforces what they both already know: that home is a different place for each of them.

Home is not just where they live, but it also means the kind of life they want to lead.