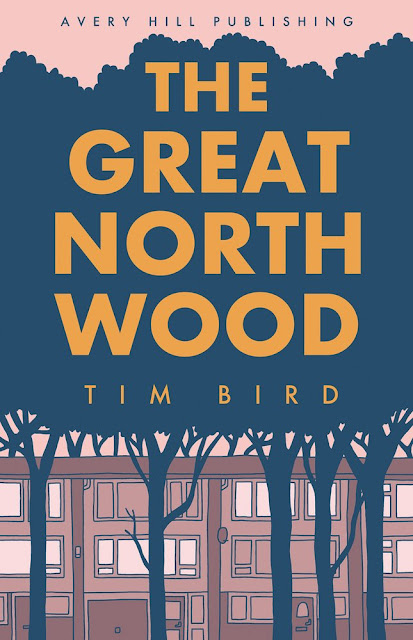 We tend to lose a sense of playfulness as we age. Nothing, in particular, is necessarily at fault. Adults have more responsibilities and obligations that get in the way of our curious inclinations. It’s the natural order of things. Slowing down takes diligent practice. It could be a sort of rigidity or lack of flexibility acquired by long work days and fleeting spare time. Maybe it’s complacency. Are we just too old for this shit?

Tim Bird’s The Great North Wood, recently published by Avery Hill Books, invites readers to slow down and wander. To frame the story, it’s worth noting Tim Bird’s interest in psychogeography, a technique developed by the French philosopher Guy Debord to study architecture and urban environments. In essence, it’s how an environment influences emotion and behavior. Psychogeography often emphasizes wandering or playfulness. Debord used the term ‘drifting’ because environments have intended paths and unintended paths. For example, you might walk from point A to point B in a city, following street signs, buildings, and certain architectural contours while being discouraged from entering other areas or zones within the city. Debord would encourage someone walking from point A to Point B to be drawn to natural attractions (curiosity) and encounters along the path. Drift. Wander. Play. 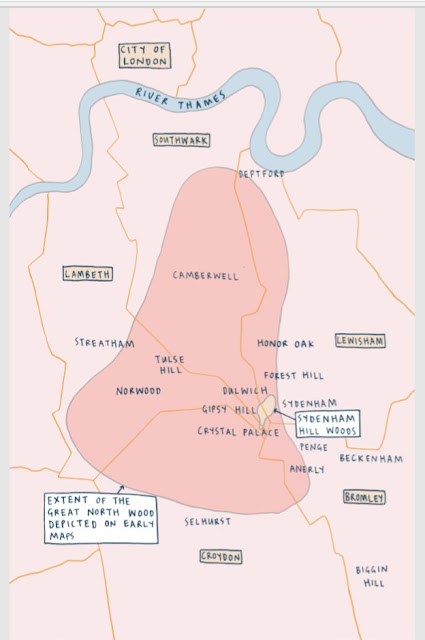 The North Great Wood begins with a full-page image of a map of Southern England, the setting of the story. Southern England was, at one time, covered in a dense forest which has progressively been cut down and developed throughout its history. Patches, thickets, and ancient oaks still remain sprawled between the suburbs and landmarks where the archaic eldritch magic of the ancient Great North Wood can be felt.

As a book, The Great North Wood is composed of several segments, each focusing on a different area and the effects development has had on the forest using historical events like World War I and regional folklore and folktales including bandits, fairies, and gypsies.

The opening sequence of The Great North Wood shows a fox eating a piece of fried chicken under a streetlamp in a dark, urban environment. Bird’s placement of a woodland creature into an urban setting, eating an unnaturally prepared meal, is a beautiful, albeit a touch sad, set up to the story. Bird juxtaposes the organic and inorganic throughout the story, here using a nine-panel grid for this first sequence with the only text being in the middle of the page. It’s a close up of the fried chicken box that reads, “Long ago, this was all rock and ice.” 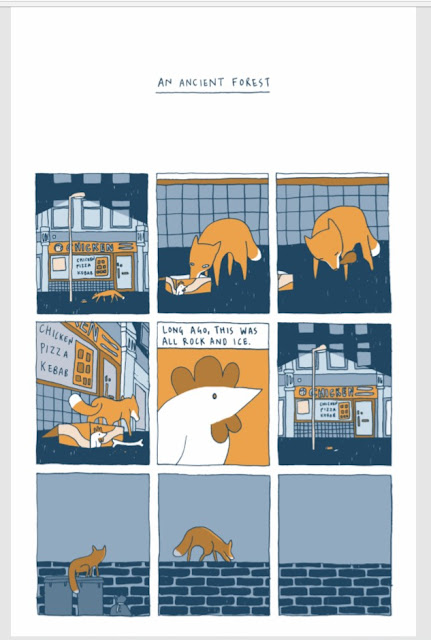 The fox hops on some trash cans and over a brick wall, leaving the city behind into an expanse of woods. It doesn’t force us to follow. The fox doesn’t bother to look back during the sequence. It does what it always does – wanders. It’s up to us to follow. We’re invited to step into the moment and drift over the urban barriers and take an unintended path.

Tim Bird’s color palette, comprised primarily of pastel pink, blue-grays, and just a touch of orange, is visually striking in The Great North Wood. The colors imbued throughout the comic aren’t commonly associated with forests and nature. Really, there is a complete lack of earth tones. This has a sort of lucid, balmy effect on the reader. Bird, like the fox, wants us to experience the forest in a different way. They want us to experience the forest period, to feel the magic residing within.

The color orange denotes the magic of the forest and is represented by numerous subjects throughout The Great North Wood. We see in Queen Elizabeth I’s hair, a girls’ bicycle, a buggy, a bus, parts of the city such as fences and facades of buildings, and most obviously - the fox. The contrasting orange guides readers through the blue-gray backgrounds, giving us motion through the story. It’s not only functional but meaningful, as the color orange is emblematic of the lingering magic permeated throughout the region.

The grid system Bird uses to set the pace of the story tends to work in extremes. The pages of The Great North Wood are full of twelve-panel grids or full-page images with little variety in-between. The best comparison I’ve got is a bit on the nose, but it’s like taking a hike. The twelve-panel grids draw readers into the environments, be it the woods or the urban environments. They put focus on the flora and fauna, the street signs and trash cans, while the larger panels and full-page images depict cities, ships, buildings, or the forest as a whole. The twelve-panel grids force readers to slow down and experience the environment. It begs readers to wander and explore.

Bird’s linework is loose, but bold, focusing on outlining the forms in The Great North Wood rather than detailing, allowing the focal point to be on the vibrant color palette. 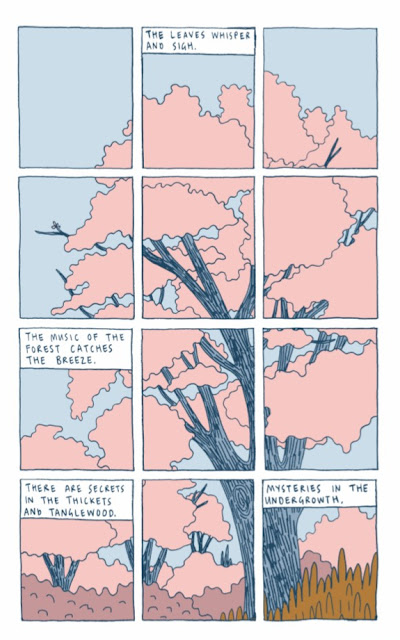 Naturally curious, playful, and representative of transformation, it’s only fitting that a fox would be our guide through The Great North Wood. The fox appears to be as timeless and ancient as the forest itself as it helps us navigate our way through its history. It’s interesting that the positive interactions in the story happen as individuals interact with and experience the forest, such as the girls speaking with the gypsy and Doctor Gardiner receiving safe passage from bandits. Most of the negative interactions are a result of society/humans changing the forest, i.e. World War I bombings and the deforestation to build ships with the advancement of trade routes. Despite mankind’s propensity to cause destruction, The Great North Wood shows the forest prevailing. Throughout the story, man-made creations, like the Crystal Palace, rise and fall while the forest continues to regrow. It illustrates a constant state of growth and decay, but through the fox, highlights a reaction to the changes. 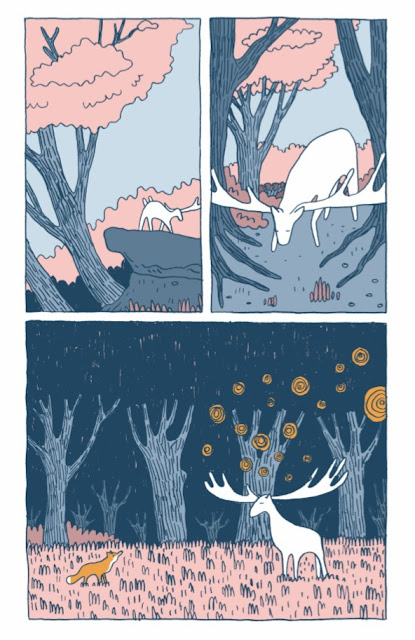 If psychogeography is all about how an environment affects us, Bird wants us to be aware of our environment and react to it within the universe’s perpetual state of flux. That means being able to slow down and recognize the state of our surroundings and see the changes. To allow ourselves to be affected by it. We are a part of the cycle of growth and decay, but it’s up to us how we interact within that cycle. 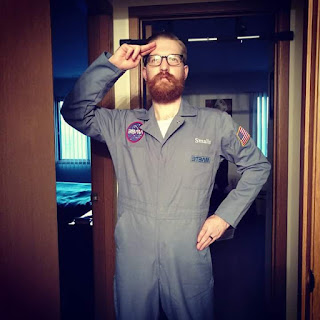