Hang In The Air, We Don't Dare: Rob Clough reviews THE LIE AND HOW WE TOLD IT by Tommi Parrish 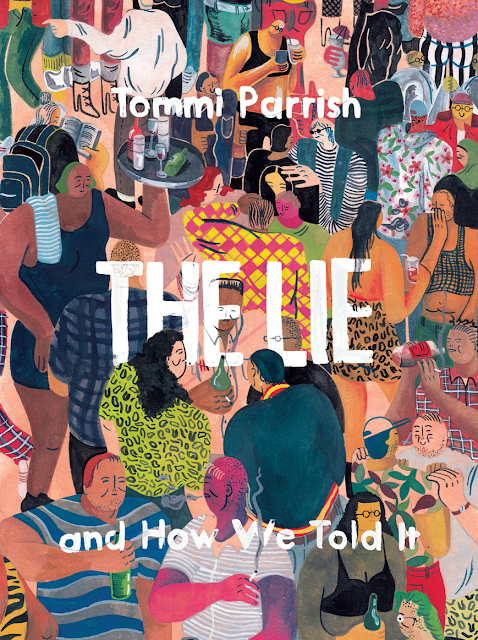 It's hard not to see Tommi Parrish's The Lie And How We Told It as a continuation of their first book, the 2dcloud-published Perfect Hair. Or perhaps, if not a direct continuation, then certainly a series of echoes. Perfect Hair is a series of loosely-connected vignettes involving a couple of different characters that explore gender identity, desire, the emotional ramifications of sex work, and the desperate desire to connect. In particular, Parrish explored the ways in which adherence to culturally defined sexual and gender identities prevents authentic action and causes cognitive dissonance. Parrish used a variety of visual approaches in that book, but they mostly settled around a thick, blocky character design with heads of changing sizes (though usually much proportionately smaller than the bodies they sat atop of).

For The Lie And How We Told It, Parrish simplified their approach while creating a more emotionally complex narrative. The plot is simple: a man named Tim runs into his old friend Cleary working at a grocery store, and they awkwardly catch up over the course of an evening. Along the way, Cleary finds a comic about a stripper's ill-fated romance with a customer that she reads while waiting around. The red-headed and bespectacled Cleary is a dead ringer for the character of Nicola in Perfect Hair, and another character is named Cleary in that book. Cleary is such a strongly-designed character that it's no wonder that Parrish chose to use her again; interestingly, her template character in the first book was a sex worker. 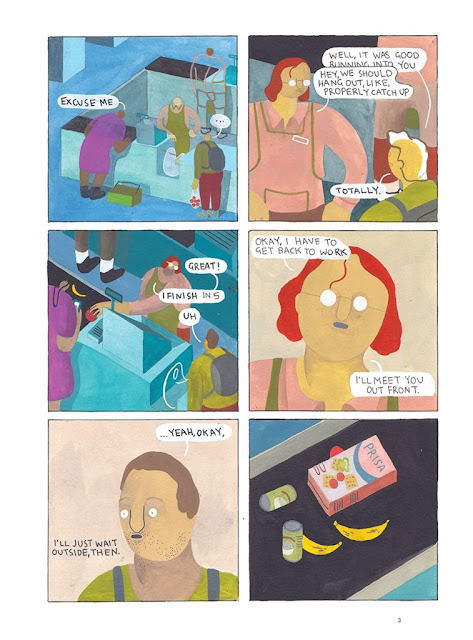 The title of this book is also the name of a Yo La Tengo song. Its brief lyrics notes that “Talking words, angry words/Hang in the air, we don't dare”, and The Lie And How We Told It is very much about words hanging in the air that are too dangerous to ponder. Tim is clearly reluctant to spend time with Cleary, who puts him in a corner by forcing their reunion. At first, there's a certain brightness to it, reflected in Parrish's beautiful backgrounds. What they share is on the surface, as Tim reveals he's going to get married soon and makes vague noises about having her over. After Cleary reveals that her love life was terrible, Tim brings up a mutual friend that Cleary used to date. It's one of many references to a past that the reader isn’t privileged to see, making it both intriguing and frustrating. After an early confrontation, Tim goes off to get some wine, leaving Cleary to find “a novella by Bumf McQueen” entitled One Step Inside Doesn't Mean You Understand. It's about the limits of empathy and its crisp, angular, black & white art is both the opposite of, and a commentary upon, the actual story.

The next 44 pages are dedicated to this story of a stripper who decides to have sex with one of her club's patrons. Echoing the relationship between the escort and john at the end of Perfect Hair, the beginning of this story is about an all-too-familiar set of rituals. In an attempt to sell intimacy to the man, the stripper takes off her wig in front of him, much as the escort is willing to go along with saying and doing certain things to provide the “girlfriend experience”. Meanwhile, the desperate and lonely men in these scenarios mistake their money for virtue in an effort to “help” these women, acting out white knight fantasies that have more to do with saving their own egos than actually connecting to another human being. The ways in which capitalism and materialism interject themselves into the story plays out at the end of the first part of the novella, as he picks her up at her modest apartment that she cherishes and tells her not to feel embarrassed. It was a profoundly misplaced, arrogant and entitled expression of contempt disguised as pity. 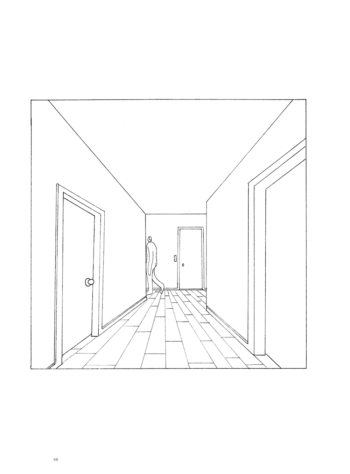 When the book shifts back to Cleary and Tim (and Cleary putting away the book), their conversation grows more intense, but their initial reconnection begins to fray. For example, when Cleary relates that she used to be so insecure in her attraction to women that she would make out with them at parties to pretend it was a show for the boys. Tim replies, “That was hot”, in a completely tone-deaf manner. The more that Cleary regrets her hiding her bisexuality when she was younger, the weirder Tim gets until he reveals his own bisexual side in a language of constant self-negation. First, he tells her about an old friend that he hooked up with when they were in high school. In telling this story, he stresses that he's not gay and “always the top anyway.” Then he reveals that it is something he does all the time, something “he just has to do”.

These exchanges reveal Cleary and Tim in diametrically opposed emotional states, as Cleary has come to terms with who she is and Tim is in denial. Parrish spotlights Tim's self-loathing as a result of his lack of authenticity when he immediately runs away to cry after confessing to Cleary that he was hooking up with men. The next scene, where an attractive man in the bathroom asks him if he's OK is almost comedic as Tim panics and runs into a stall. The act of facing up to his true nature is just too much for him. Even when he abruptly left Cleary, he made some noises about hitting on the (female) bartender, a delusion that fooled no one, least of all himself. 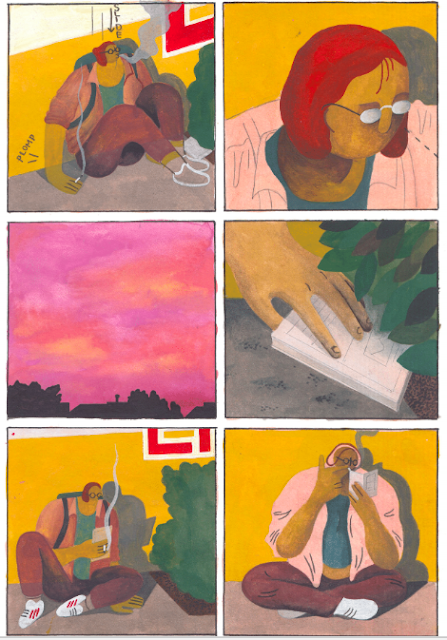 This is all in a club that Tim likes, and Parrish's large page size really pays off here, depicting the visceral quality of the sheer number of brightly colorful bodies in a small space. In the context of how Parrish draws bodies, they are attractive and fairly oozing sweat and pheromones in a sexually charged atmosphere. It's implied that Tim has picked up more than one man here, something his fiance' is completely unaware of. Prior to revealing his proclivities to Cleary, he utterly shut down a fishing expedition on her part as she asked why he thought they had never hooked up back in high school. His revulsion is visceral and obviously hurtful, though he tries to play it off as thinking of her as a sister.

Cleary subsequently goes from that low moment to meeting an attractive female bartender who listens to her story, has some sage words of wisdom and winds up giving Cleary her number, much to her delight. It is the kind of event that happens when one is ready to move on with one's life instead of being stuck in a perpetual and unresolved adolescence like Tim. There are a series of brilliant panels where Tim apologizes for being weird about talking about sexuality where they are hunched over their drinks, their heads shrunken down to a tiny size, representing the way in which both of them retreated emotionally in the moment. However, any chance of repairing their friendship is over, as both of them are in vastly different headspaces. Indeed, there seems to be a connection between the size of the characters' heads and their emotional states, as though the way Parrish draws people reveals inner thoughts and feelings.

As Cleary picks up the book to finish it after the evening is over, she picks up where the stripper understands how she's being humiliated and resents the man for it. However, it also gives her clarity, as she stands in his big, featureless house that's part of row after row of identical homes: being with him was “eavesdropping on a type of life I had never wanted for myself”. She tried on the role of being the girlfriend of a typical white, heterosexual male whose concept of sex began and ended with his penis—as did his sense of self, seeing the world as a series of things that could be bought and sold for his pleasure. She had been lying to herself about wanting this life of morally and aesthetically bankrupt ease, just as he was lying to himself about being a benevolent savior when all he wanted was to own her in a way he couldn't possess his ex-wife or their children. 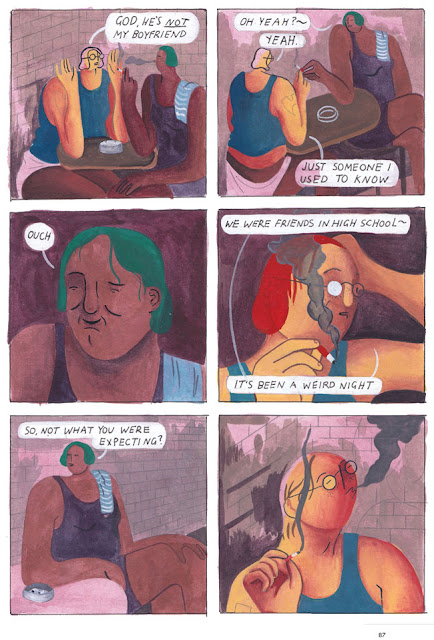 With this, Parrish provides an epiphany, or, perhaps, just a moment of much-needed affirmation, for Cleary. Cleary understands that she doesn't have to lie about herself or what she wants anymore and to do so would only bring harm to herself and others. Furthermore, seeing Tim trapped in a hell of his own making makes it even clearer that living a life of lies is no longer a viable way for her to live her life.

In both Perfect Hair and The Lie And How We Told It, authenticity is essential to living a meaningful life, with the caveat that one must have the emotional space and self-acceptance to make that authenticity possible. Unlike existentialist thought that posits authenticity as a singularly individualistic idea, Parrish counters that our connections to others always contextualize our choices. In this regard, ontology (who we are) and ethics (how we deal with others) are inescapably connected and lying about this connection to ourselves is self-negating bad faith. Or to quote RuPaul: “If you can't love yourself, how the hell you gonna love somebody else?”