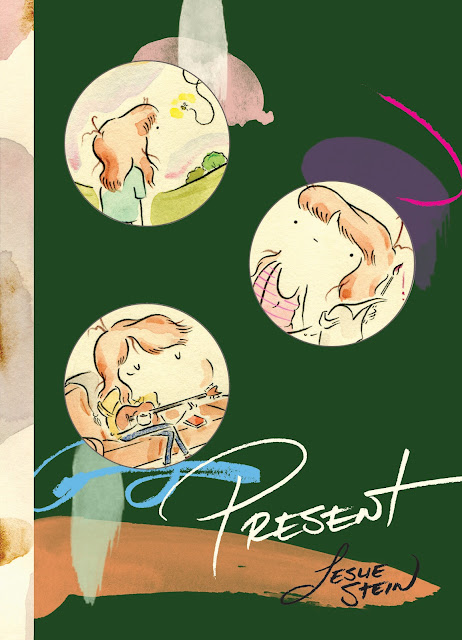 When I think of autobiographical cartoonists who make sheer beauty through craft a priority in their work, Leslie Stein's name immediately comes to mind. Stein's earlier black and white comics were marked by extremely delicate linework combined with an intense stippling technique that was no doubt incredibly work-intensive. She was the only notable cartoonist I could recall who still used such a technique after Drew Friedman abandoned it years ago. Recently, Stein has switched to a watercolor-and-ink technique notable for its brightness and spareness. Her comics in her Eye Of The Majestic Creature series always had a magical realist bent, with anthropomorphic musical instruments and other whimsical and experimental elements fitting in with stories based on her actual life. There's a sense in which her watercolor comics (mostly done for Vice magazine online) also have a fantastical element, but it's entirely in terms of form instead of content.

That element is the reader looking through Stein's eyes at the world and finding it a magical, colorful place. There is a strong sense of intentionality at work here, as Stein hints that she draws this way in part to combat her fears. In this regard, the title of her newest collection of strips, Present (Drawn and Quarterly), has a double meaning. In the introduction to Present, Stein talks about her attempting to flip a switch in her brain when doing something unpleasant and changing her outlook on the activity. In particular, when drawing comics, she flips the switch from "challenge" to "gift". Being able to create is a gift (or present) she gives herself and others, and in order to do so, she must remain present, or focused on singular moments. She alludes to depression and finding few activities that bring her joy, with drawing and drinking at the top of the list. Those are interests that both serve to alter here, albeit in vastly different ways and with diverging consequences. Stein also reveals that despite the fact that she mostly lives a nocturnal existence as a bartender and musician, the night has always made her fearful and afraid to be alone. That's especially troubling for Stein, whose entire body of work has addressed her intense introversion that borders on solipsism with a contradictory need for connection and belonging.

In that sense, each of the short, delightful stories in this volume act as a sort of buffer against fear, a candle lit instead of cursing the darkness. Whereas some of her previous stories about her childhood focused on darker and more uncertain aspects of the experience, this volume sees an older Stein who's come to terms with that past and has embraced her family in full. Stories like "Daughter's Day", "Mom Guilt", "True Success" and "Thanksgiving" explore that past and revel in the closeness of her present relationships. "True Success" is about visiting her father and going to a Smokey Robinson concert whose surprising sexual lyrical contents ("Love Bath"!) made for a hilarious level of discomfort. "Daughter's Day" and "Mom Guilt" are both about remote communication with her mother and how much her mother not only loves Leslie, but how much she admires her as an artist. The same was true with the story about her father, as she received unexpected praise. "Thanksgiving" reveals that her parents split up shortly after she was born, so she never saw them together, making the holiday with them and her brother so delightfully strange. 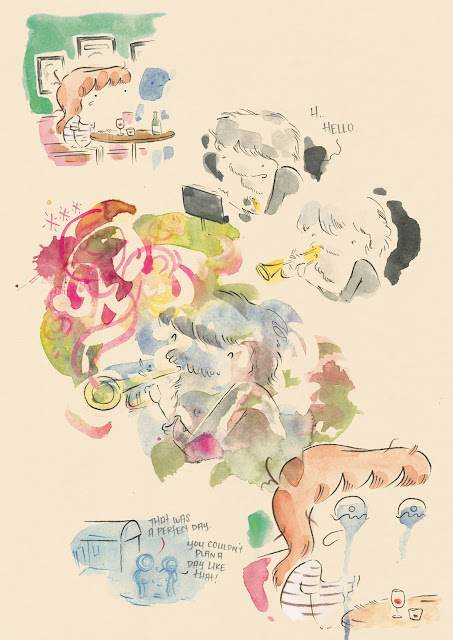 For these comics, Stein uses an open-page format, with no panels or structure. The drawings simply flow into one another. It's rare that a comic employs color to do so much of the heavy lifting of storytelling, but Stein's minimalist and restrained use of both line and hue makes it easy for the reader to not only quickly move from image to image, but to fill in gaps in shape and form. That commitment to clarity allows Stein to occasionally step outside of those bounds. For example, when her mother asks for a drawing from her for Christmas, there's a beat where Stein looks at the camera (with tiny dots for eyes and a sliver of a line for a nose) and then she melts into a puddle of happiness on the final panel of the page. Cleverly, the next page picks up in a bar, where the image is of a spilled drink, continuing that image from the previous page in a next context. Additionally, Stein's lettering is very much a part of the drawing, as she'll occasionally switch from her normal handwriting to use larger letters in a different color for emphasis. She'll also catch the reader's eye by putting in some background watercolors underneath the letters. The paper in this book is also important; it's a sort of cream-colored paper that adds a warmth to each page that a brighter, shinier page would not. 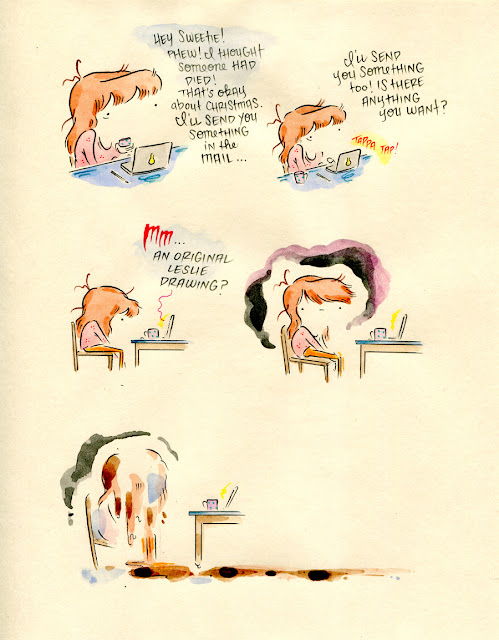 Most of the other stories in Present are about being a single woman living and working alone in the city. There's an aching melancholy pervading each of these stories, even as Stein tries to find a way to either dull that feeling or actively seek the kind of engagement that she knows is difficult but ultimately rewarding. "Vanguard", for example, sees Stein teaching art and then taking her own lessons to heart as she stumbles upon a jazz club and draws, just as she told her students to. "Perfect Day" extends that idea, as she meets a friend for an unofficial date that winds up turning into a day filled with beautiful memories, culminating with a show watching a schizophrenic trumpet player. "Night Out" sees two close male friends pulling her out of her isolation into a great evening, making her feel loved. 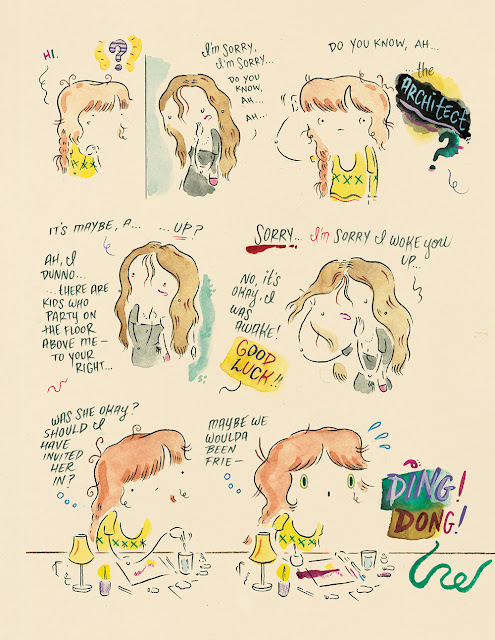 In many of the stories, the occasional sadness of this life is also addressed. "The Architect" finds Stein helping a drunk and confused woman get home safely, because she knows that she had been that person on many occasions. In "The Bridge", a lonely Stein is walking across the Manhattan Bridge, wonders how many people jump off of it, and makes a joking reference to suicide on Instagram that alarms her friends. Seeing a comedian do a hilarious but in-your-face about suicide right after that helps reset her mood positively. In "Exes" and "Omakase", Stein ponders past relationships. The former story finds a lonely and insomniac Stein asking to sleep at an ex's place and confronting the feeling that she might wind up alone. The latter story is set at a sushi restaurant where she's eating delicious food (a running theme in the book) and thinking about the one ex she's not still friends with: her ex-fiance'. Again, there's a sense of the bitter and the sweet in this comic that's the essence of the book. There is pain and loneliness, but there are friends, beloved customers and delightful weirdness to experience. There is existential isolation but also joys to be experienced by all the senses, including art, food, drink and music.

The unspoken theme of Present, as it is in much of Stein's work, is the role drinking plays and played in her life as a kind of self-medicating act. She alludes to it constantly, though in this book a lot of it is in the past tense, as her ability and willingness to accept pain has made it possible for her to also fully open herself up to accepting joy. That joy is then channeled into her art, providing a gift both for herself and her readers.

Rob Clough has written about comics for Cicada, the Comics Journal, Sequential, tcj.com, sequart.com, Savant, Foxing Quarterly, Studygroup Magazine, as well as for his own blog, High-Low (highlowcomics.blogspot.com).