"Everything Seems Amplified, Electric": An Interview with ANT SANG

Early in July, I did a short review of New Zealand cartoonist Ant Sang’s recently re-released epic series The Dharma Punks. It’s one of those books that climbs into your sense of self and, as it lingers there, it rejuvenates and enlightens. Recently, Ant was kind enough to do a little email back and forth interview with me about The Dharma Punks and its message of hope and its embrace of both punk and Buddhism. Ant also talks about audience reaction and what he’s learned during his career. 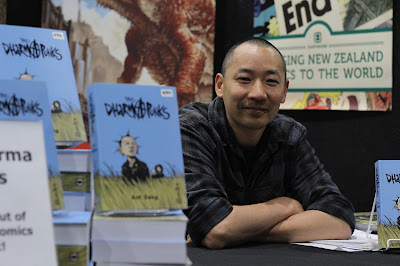 Daniel Elkin: Let's just jump right into the big question: Why did you make The Dharma Punks and what do you hope your readers understand by the end of it?


Ant Sang: I had been making a minicomic series about a group of punks, called Filth, in the 1990s and it had been a good few years since I had finished with that. I was planning on doing something entirely different next - a kung fu comic. But the story wasn’t progressing at all because I kept coming back to the characters I had created in Filth. I realized that I hadn’t finished with them after all, and decided I needed to do the Filth story to end all Filth stories. That was the genesis of The Dharma Punks. It was my attempt at making sense of that period of my life, when I was looking for some answers to those big questions.


As for what I hoped would be conveyed in the story – I guess I wanted to make a story which had hope. A story which said you could find your way out of the darkness, that there is a point to it all.


Elkin: Do you think that hope is an essential component of the punk mindset, or do you feel that there is an inherent juxtaposition between punk and hope?


Ant: I think punk’s main characteristic is anger, or frustration. A reaction to disillusionment, and a rejection of the accepted status quo, fueled by righteous anger. I don’t think hope is a necessary component of that, but neither is it an impossibility. What interested me was Buddhism is also a reaction to disillusionment, but obviously a very different path. Funny thing is, when I first started exploring Buddhism my first impression was that it was surprisingly nihilistic. The first teaching is something along the lines of ‘life is suffering’ – which is pretty hardcore in its honesty! Anyway, I found it really interesting to explore how, or if, Chopstick could reconcile these two seemingly contradictory aspects of his life. 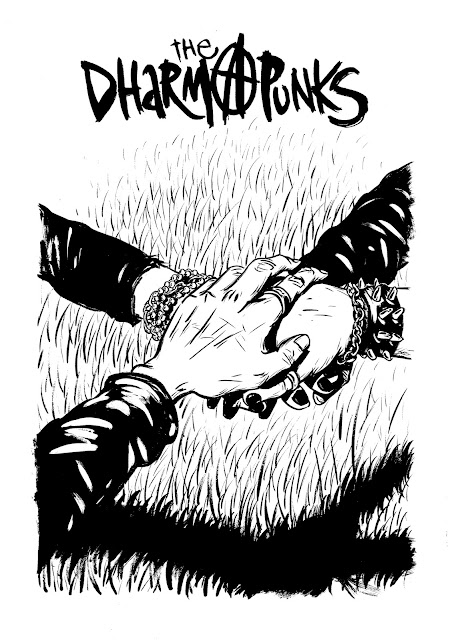 Elkin: This reconciliation seems to be what is at the heart of Dharma Punks. Do you think that Chopstick (the main character in the book) is able to find that harmony by the end of the book?


Ant: Without wanting to give too much away, I’d say by the end of the story Chopstick has definitely learnt to embrace many of life’s contradictions. It’s really about his journey to accept, or even embrace, the more painful aspects of life - and to rediscover his love for this world, before it’s too late.


Elkin: Does this reflect your personal philosophy? Do you see yourself as a positive person and is that outlook reflected in the art you create?


Ant: Yeah, I guess I am a fairly positive person. I tend to hope for the best case scenario in any given situation. I mean, this world can be a horrific place and without some optimism – both every day and on a larger scale, I’m not sure I would cope well at all.


Regarding the art I produce, my main goal is to explore things which interest me. For Dharma Punks, it was looking at the ways we find meaning in our lives, especially when confronted with loss and death. Shaolin Burning, although a kung fu story, was at its core an exploration of how artists’ talents can be both a blessing and a curse - and whether artists can control the creative impulses and fire which burns inside us. I guess my personal philosophies can’t help but be present in my art, but then again I’m currently working on another story which is an exploration of the idea that all people are capable of evil, and I imagine this is going to be a lot less optimistic in its outlook. 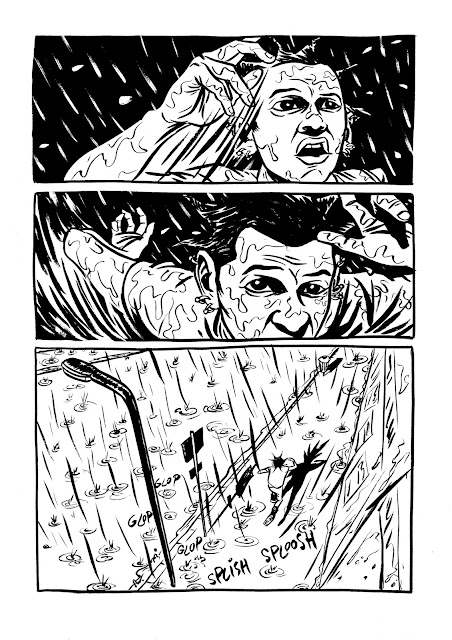 Elkin: I'd love to talk about your new book, but just one more Dharma Punks question first. I'm going to assume that the majority of its audience up until now has been in New Zealand. Now that the book is being reissued through Comixology and collected through Conundrum Press, are you getting a lot of feedback from new markets and, if so, how has this new audience's reaction to the book differed (if at all) from what you had been hearing about it beforehand? Do you find that this new audience has a different sort of understanding of the book, or is there a sort of universal sense to what you presented therein?


Ant: The US/UK edition has just been released a week or two ago, so it’s too early to know how the new readers will respond to the work. Dharma Punks is set in a very specific time and place – Auckland, New Zealand in the mid-1990s, and that really appealed to local readers. To see their city reflected back to them really made the story resonate with people who knows those places. But I think the story will be universal enough to speak to international readers. I reckon anyone who has struggled through an early-twenties ‘trying to find yourself’ phase should relate to the story. It’s such an emotional period in one’s life. Everything seems amplified, electric and the world so full of possibilities – that’s what I tried to capture in the story.


Elkin: And I think that's what is the universal appeal of a book like Dharma Punks; it captures that sort of liminal space we occupy as we transition from the passions of our youth to the expectations of maturity. Do you feel that, by the end of the book, Chopstick has lost something important as he comes to his new perspective? Is the ending celebratory or elegiac in this regard?


Ant: I think the ending is both celebratory and elegiac. By the end of the book Chopstick can no longer remain where he is. He’s forced to leave, both in a physical and spiritual sense. And with that comes loss, but also new beginnings.

Elkin: I guess that goes right back to the punk ethos of you have to destroy something in order to create anew.


Let's talk about what you're working on now. Earlier you mentioned the new book as being “an exploration of the idea that all people are capable of evil” – that sort of sounds like a reversal of the optimism that is central to Dharma Punks. Is this a result of changes in your life or in the world or just to try something new?


The book is only at a very early stage. It might even end up being a film script before a comic. Whichever form it finally takes, it’s an idea which has interested me for a long time. I’ve long been fascinated by horrific historical events, such as the Holocaust, the My Lai massacre and how ‘ordinary’ people can commit acts of extreme violence and cruelty under certain circumstances. I recently saw some photos from the 1940s - Jewish people stripped naked, being humiliated and beaten on the streets, amongst crowds of laughing spectators and it’s so chilling. Of course, look around at the world today and you can see the human capacity for violence hasn’t dwindled. I really want to explore the conditions of how violence and ‘evil’ can thrive, but I don’t think it’s necessarily a pessimistic view of the world. Perhaps it’s more an extension of the idea of the duality in life. In Dharma Punks Chopstick learns to embrace the co-existence of life’s joy and suffering. Likewise the new story will look at the good and evil which we are all capable of.


I can't thank you enough for taking the time to do this interview, Ant. Before we end it, though, I was wondering if you might have any advice for anyone getting into the comics game. Is there anything you wish you knew when you first started that would have helped you out?

Ant: Thanks Daniel, I’ve enjoyed chatting with you.


I made my first mini-comic twenty one years ago, and between then and now I’ve figured out a lot of things by trial and error. I recently gave a Pecha Kucha talk about the things I’ve learnt during my time making comics, but I think one of the key things when starting out is to not be too hard on yourself. Don’t worry about making the perfect comic. Just keep creating and getting your work out. Perfectionism can be a real creativity killer. Also, I wish I had realized earlier, that art doesn’t have to be fun. Art is hard work, and there are times when as an artist, you’re going to feel inadequate and filled with self-doubt. It’s reassuring to know though, that even the best artists have the same feelings, so don’t feel there’s anything wrong with you if you’re finding it a struggle – it really is just part of the process.


You can pick up a copy of The Dharma Punks via Conundrum Press or get the series on Comixology. 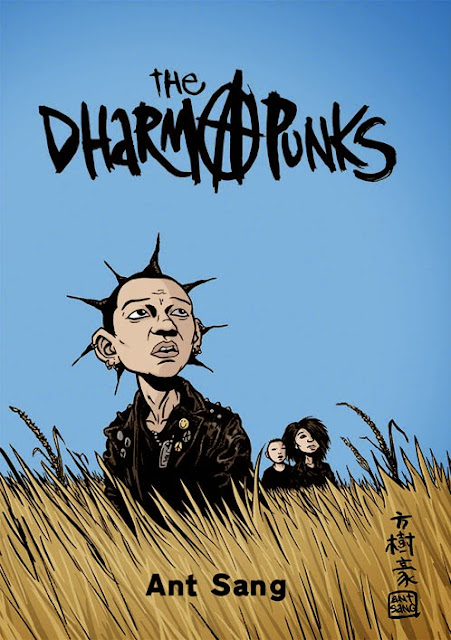