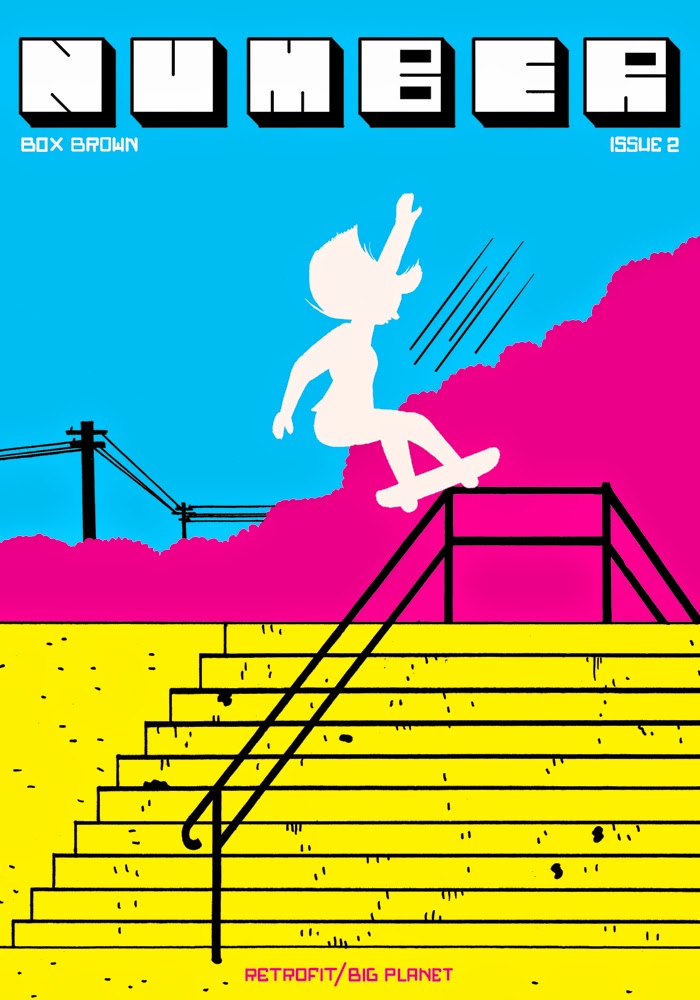 Daniel Elkin: Okay, Sacks, so Box Brown is back with the second issue of Number and since I missed issue 1, I’ll just take this one at face value and go from there, leaving you to fill in the gaps.
In its 54 black and white pages, Number Issue 2 contains two stories which Brown describes as, “… the storiesSk8rh8r about a skateboarding girl who gets White Castle and has a run in with a schizophrenic local and the cops andElroy Mirrors’ Big Score about a struggling documentary film maker.” So we got these two slice of life comics that seemingly have little to do with each other and whose narrative focus are more on individuals who live on the edges and are participants in other people’s stories.
The narrator of the first story, Sk8rh8r, stands (or skates, as it were) outside normal expectations being a 33 year old woman who’s drunk skateboarding home. Her story is less about her and her life and more about how others interact with her. Her reactions are numbed by alcohol, her experience in this narrative is mostly reactive, and the lens she provides us is unsure and unwilling to draw conclusions. Through Rose, Brown puts the reader in an awkward position, as our understandings of what is occurring here gets filtered through a slightly bored perspective.
When an observer observes an observer, what is he or she really watching? Where does consciousness stand and what is its relationship with “reality”?
Elroy Mirrors’ Big Score takes this concept of participating in the observation of observing one step further, focused as it is on a documentary film maker. Here is a gentleman who makes a living out of capturing the lives of others, filming their stories, allowing their experience to take precedence. A documentarian, though, takes the footage and frames it through his or her own perspective, thus manipulating the act of observation in order to tell a particular story. In Elroy Mirror’s Big Score, though, the documentarian is seemingly less concerned with his own vision and more about how others perceive him.
And yet still, even here, little seems to happen. Tension comes from possibility not actuality, and a dull hum seems to pervade the whole thing. Box Brown is working in quiet places, and Number Issue 2 shouts this into our heads with a firm lines and dark ink. Jason Sacks: Elkin, there’s a theme that runs through much of Box Brown’s work, one that I’m sure you know well as a wrestling fan: kayfabe, or the process of scripting a staged event that seems real but is actually unreal.
Many of Brown’s comics and graphic novels have played on that edge between what we see and what actually is happening. His wonderful graphic novel Andre the Giant is an obvious example of that, with its portrayal of both the fake life of a wrestler in the ring and that same fighter’s real life struggles with everyday life. That’s also true inNumber Issue 1, which takes as its central idea a magazine that’s called Kayfabe (as a commentary on objectivity and the artifice of modern life) and in which Diamond Dick the professional wrestler is a key character. Brown’s recent mini New Physics takes the idea of layered reality and unreality to a whole different level, incorporating social networks, cultish communities and virtual worlds together in ways that transcend the comics page.
On first glance Number Issue Two is a retreat from the idea of unreality piled atop reality. You’re right, Daniel, that this issue presents a pair of quiet stories about outsiders from society and represents a step back from the flash and depth of the works I mentioned above. But does it? Or is there something more interesting happening here?
On some level Box Brown is playing with those same concepts in this comic as he did in his earlier works, but he’s giving those ideas a different twist, moving from multileveled intentional delusion to self-delusion and finally to the painful delusion of normalcy. There’s an implied interior/exterior narrative in these stories that gives these characters an odd amount of depth –they’re strangers to us but we see them reflected in their actions, which reveal character despite these peoples’ efforts not to change.
In Sk8rh8r, Rose, the 33 year old woman at the center of the story, is cryptic to us. The only way we get inside her head is through her extremely banal thoughts – all strange annoying self-serving surface babble. Rose is unknown to us, except that we somehow do know her. Or at least we know the enigma of her. Why would she seem to never grow up, wandering around town late at night on her skateboard, eating White Castle burgers and living in fear of the police? Maybe she’s a mystery to herself, lying to herself, doing kayfabe on her own mind, telling herself narratives of who she is to fill the woeful sadness of her true self.
This is even truer in the story of Elroy Mirror, who sees his entire world through filters and screens – a podcast over skype, an interview subject on video, a phone constantly in his hand, a game constantly at the ready. Even when he’s face to face with another person, there’s an object between him and that person: a coffee cup, a screen door, a gun, a boom mic, a cigarette. There’s almost always something blocking Elroy’s contact with his fellow people. He’s at a distance from everything in his world; remote, estranged, dreaming of a connection to others through yet another screen via his own website and making his realest link to humanity through a “Missing” poster and a woman hiding behind a door. It’s an unreal world, a world of both bonds and fractured links. Slivers of humanity expressed in bits and bytes and the judgment of others.
And that’s the point of this book in my mind. You adroitly say that tension comes from possibility not actuality, but to me the dull hum is a drone of noise that allows us to meditate on how reality and internal fantasy intersect and interact in our own lives. Are we as banal as we hope? As great as we dream? Or are just always living our own kayfabe? Elkin: We are always living our own kayfabe, Sacks. The stories we tell ourselves that give meaning to our lives are pretty much the most important art we can make. Kayfabe is creation and creation is hope. We hope that what we say and what we do strike the right chord, make the best impression, tell a larger tale of ourselves.
After all, we are social constructs because we are social beings. Our validity resides in the illusions of reality we can convince ourselves of. Right now I am playing the role of someone whose opinion holds enough value to everyone else that I cannot help but pontificate at length about Box Brown’s Number Issue 2. I continue to do so as this guise satisfies me. Box Brown’s kayfabe is as a cartoonist. Both of these creative acts leads to acts of creation.
Which brings me back to the observer observing observation thesis I posited earlier. Kayfabe requires an audience, even if it just is an audience of the self. We put on our dumb-shows one leg at a time hoping it doesn’t make our asses look fat. In the end, our judge of this, our mirrors as it were, are the experiences we have. Others watch us and learn from our act and use what they learn to create their own act. When we watch someone watching someone perhaps we hone our skills even further?
Brown seems to be working in this realm of ideas, as you have already pointed out, Sacks. But I’m not sure if he knows what final comment he wants to make about it all. In Number Issue 2, the stories don’t really end, they merely conclude and, as readers, we’re left little to go on other than to do as we are doing now: thinking these thoughts, writing these words, dancing our dances. As Brown develops further as an artist, instead of showing us kayfabe, perhaps he might start drawing conclusions about, “how reality and internal fantasy intersect…” as you said  Until then, we can enjoy how Brown shows shows of showing shows and nod our heads at the mirror they become.

Sacks: The mirror is the message. Isn’t that what they say? Or maybe as you said before, perhaps the tedium is the message. Life is full of tedious moments and perhaps the way that we can appreciate the glory of our tedium, or get perspective on our tedium, is to celebrate that tedium or at least see it played out in other people.
Because if kayfabe requires an audience, even if it just is an audience of the self, then part of the reason we need art is to pierce our own kayfabe. In order to find truth in our lives, we need to see truth in others and watch ourselves through that prism. We don’t need a creator to help us draw conclusions about our lives, with all our banality and self-delusion. We just need a mirror.
And I don’t need the mirror to talk back.