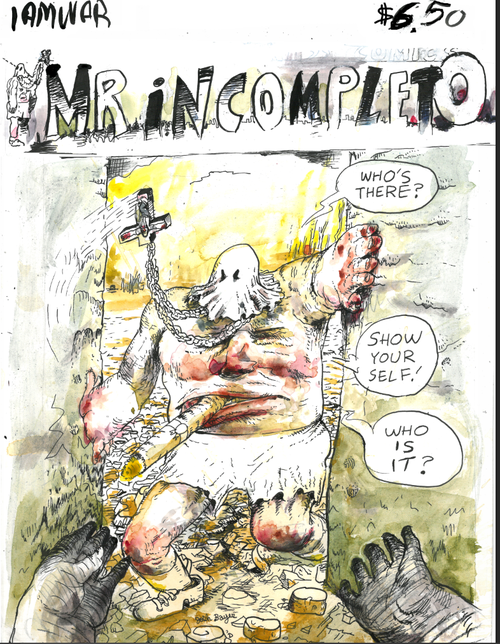 Josh Bayer's comics are a mess – an intricate, muddied, thought-provoking, glorious mess – and I, for one, am on board with almost everything he does.

Bayer debuted his latest book, Mr. Incompleto, at CAB this year and, like Theth before it, it's a comic that requires you to scrape off some muck before you see its shine underneath.

In a note on the end page of Mr. Incompleto, Bayer writes, “This book made in part as a loving tribute to the comics of 1980, especially the writing of the late Mark Gruenwald.” Gruenwald, of course, was best known for his career at Marvel (including becoming Executive Editor in 1987), most notably for his work on the 12 issue miniseries Squadron Supreme in which a team of superheroes take it upon themselves to assume power and create a utopian world (to disastrous results, of course).

Bayer's book is certainly full of cosmic powers, time travel, and world saving, but homages to superheroics and team dynamics aside, Mr. Incompleto is a comic about identity and the formative relationships which structure our sense of self. At its heart, Mr. Incompleto is a story about fathers and sons, which, if you think about it, is pretty much what all superhero comics are about.

But that's a topic for another time.... 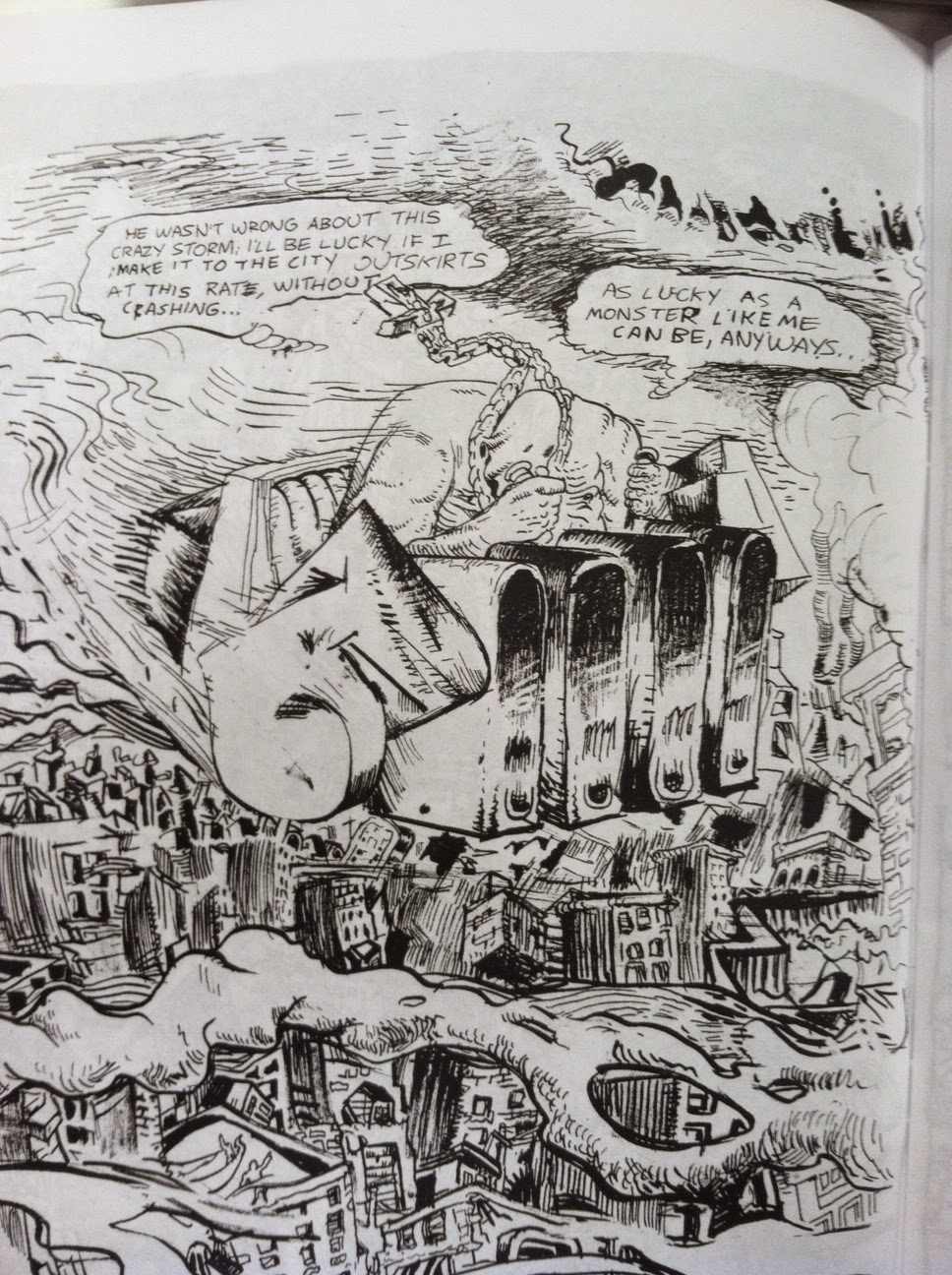 Through thick, inked-smudged pages and oddly askew perspectives, Bayer tells the story of Chance Alphax, code named Zero Sum, who has time traveled a thousand years in the past to stop his fifteen-year-old self (who “only wants to date and listen to REO Speedwagon”) from eventual space travel to avoid a future predicated on “a thousand years with no love just isolation and insanity and the slow ticking of the clock...”. He enlists Mr. Incompleto to aid him in this while having to battle the other members of his supergroup, The Saturn Six, who are trying to stop him from creating a temporal rift which could DESTROY THE WORLD!

Yea, it's typical cape and tights bombast and narrative wonk full of pronouncements and posturing, but this story line only serves as a framing device for Bayer's true intent. As the book sludges through the begrimed and chaotic pages that are characteristic of Bayer's art, the narrative switches focus from Zero Sum's quest to the awakening of young Chance Alphax to his potential. It becomes an unexpected bildungsroman in which a son must confront the father in order to become a man. 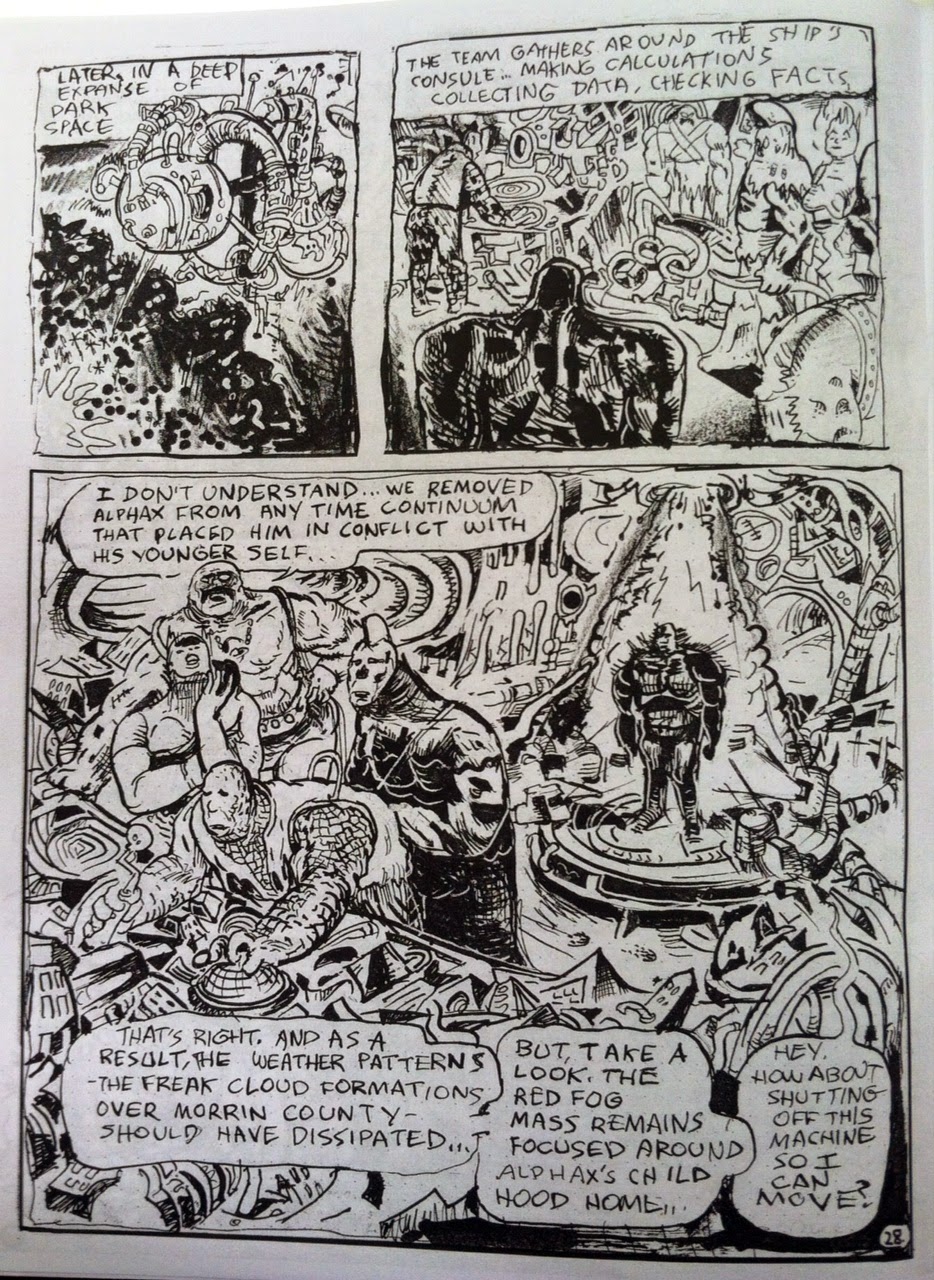 Yet, looking back, Bayer drops hints of this confrontation throughout his story, most noticeably in the character of Mr. Incompleto himself. Starting with his name, Incompleto, and then with his appearance: a hooded figure, face hidden, emblazoned with a constantly cigar-chomping sneering visage across his chest, wearing a crucifix about his neck that is constantly flying upwards, negating the symbol. Mr. Incompleto is all about rejection of identity, “forever removed from humanity's embrace.”

The next hint comes on the second page of the book. The comic begins with Mr. Incompleto making pancakes for his horse-sidekick(?), Hotspur, and Bayer takes the opportunity to tell his readers that “in one home, at least, the art of communication is still alive and well...” suggesting that in most households this is not the norm. Of course this domestic scene is interrupted, the breakfast trodden underfoot, trouble is brewing.

Zero Sum's quest is to change his past. To change “one simple thing” to spare him a thousand years of suffering. Ideas of confinement and home and showing one's true face bubble up through the trope until Bayer makes his larger purpose clear at the end.

It's commanding and impressive, but it requires an active reading, especially since Bayer throws curve after curve, through his art, through his beats, through playing with our expectations. As things on the surface seem to be go off the rails, his train of thought steadily chugs along the tracks, and once again Bayer proves that “even” superhero comics can be substantive in the hands of an artist. 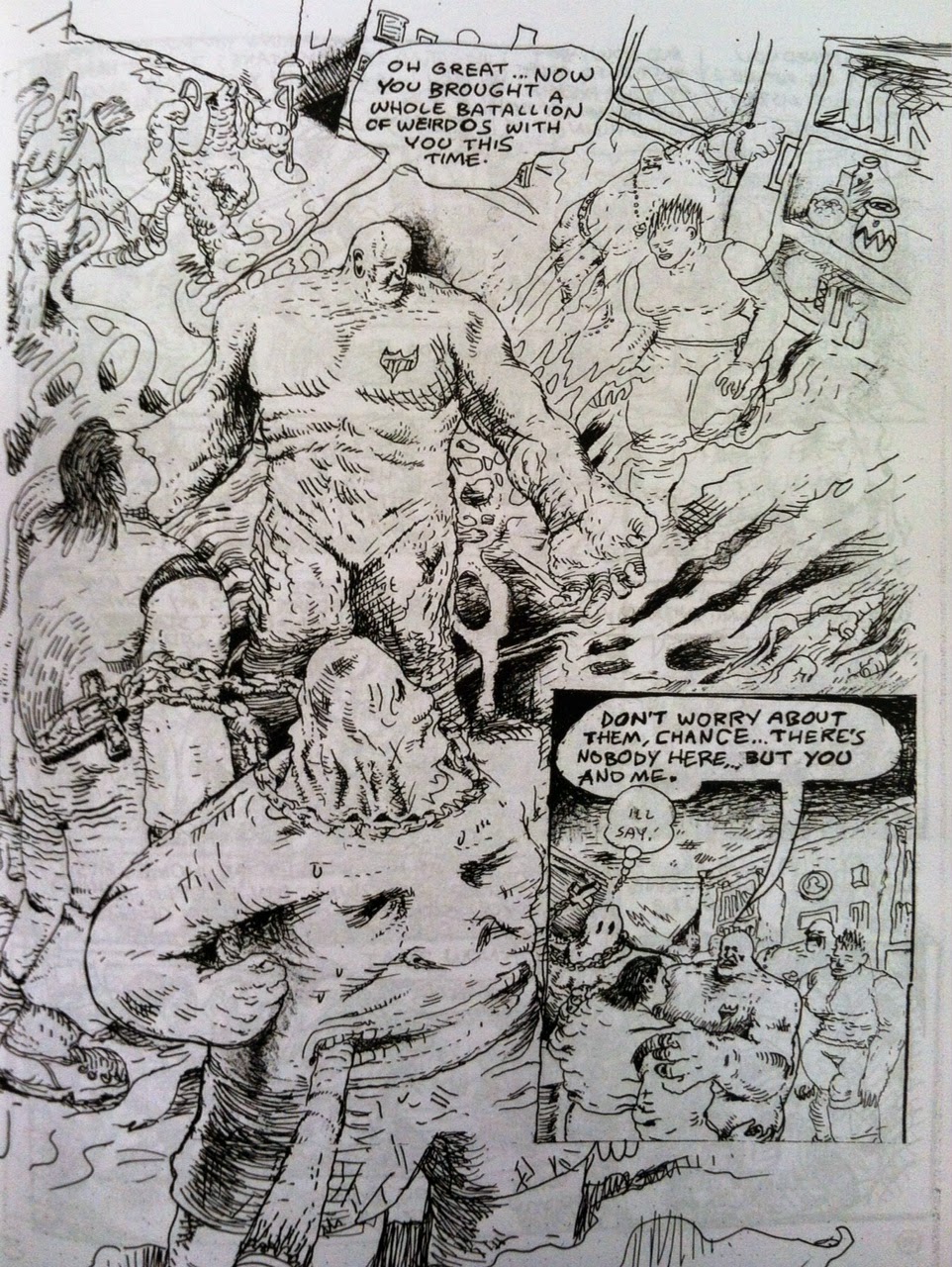 With Mr. Incompleto, Josh Bayer takes up the themes of isolation and identity he last explored in Theth and expands on them further. It's messy and confusing and stained and off-kilter, but it has to be, because it always is.

You can pick up a copy of Mr. Incompleto, along with a bevy of other Bayer books, at his website here.