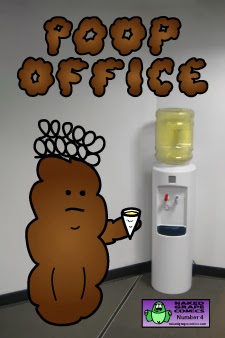 If you fancy yourself a social critic of any sort, a new digital release of Poop Office on Comixology is always worth noting for anyone who has ever participated in any form of bureaucratic construct has worked in a Poop Office. Interpersonal power politics and the inanity inherent in closed systems fester in our lives like turds in the bowl.  Ben Pooped knows this and he knows that you know this. His comic, Poop Office, is the mirror that reflects the true human condition.
If you have been following this Digital Ash column on Comics Bulletin for any length of time, you know that I've written extensively on the thematic profundity of Poop Office. There's no need to rehash any of what I've said before, other than to say that with this series, Ben Pooped is working out some heavy shit.

I mean, this is prime fertilizer for thick thinking.
And Poop Office continues along these lines throughout its 22 or so pages. What could be easily dismissed as simple gag comics easily refract under scrutiny into social commentary of the highest order. By casting the everyman as shit,Poop Office goes swiftly Swiftian in its satire.
Through page after page of diatribe disguised as one-liners, Poop Office dissects the modern world better than any social commentator or political pundit. You have to be open to this shit to let it seep in, and once it does, the stink of its message will bring you to tears. Much like we shame-hide our defecation from the eyes of others, we keep our confrontation with the existential angst of twenty-first century existence veiled behind digital distractions, weird sexual deviations, and the bending of psychoactives. This comic kicks open the bathroom stall and shines the Ty-D-Bol of truth in your eyes.
If you haven't been reading Poop Office, then you have been missing out on something powerfully off putting – the reality of the modern condition.
Poop Office #4 is available on Comixology.