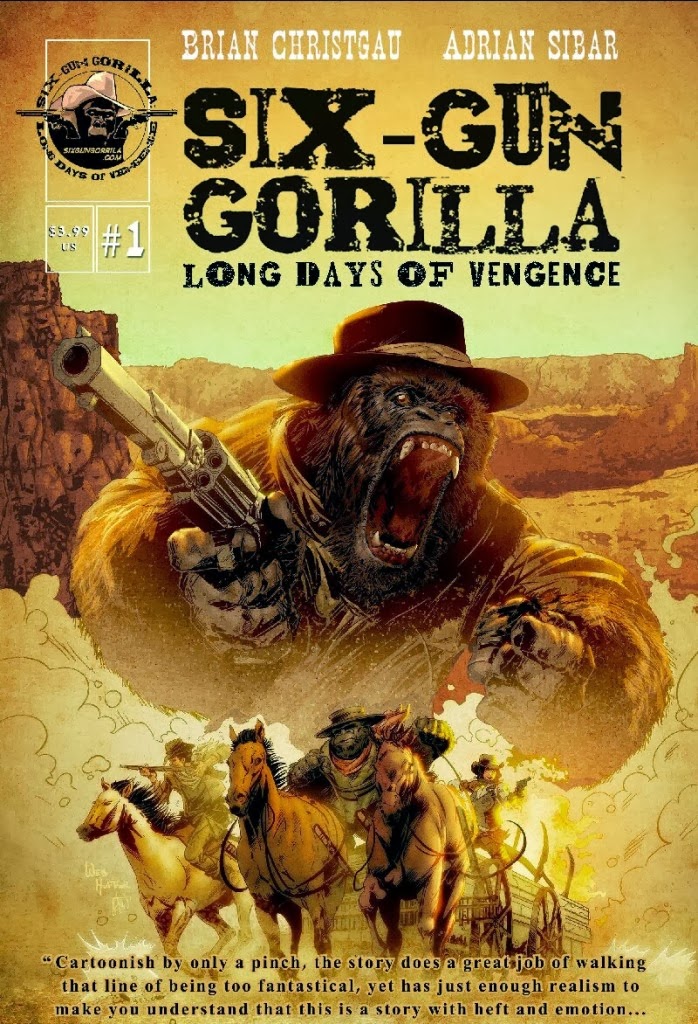 If Si Spurrier and Jeff Stokely's beloved take on this 1939 public domain character leans more toward Terry Gilliam-style sci-fi infused world-weaving, then Brian Christgau and Adrian Sibar's alternate rendition leans harder on Sergio Leone-style genre fiction, and you can practically hear the Ennio Morricone score whistling in the wind.
Jason Sacks, Daniel Elkin, and I will be conversatin' about this here pile o' Spaghetti Western graphic litter'cher like the comic book critic versions of the good, the bad, and the ugly.


The first issue is largely an origin story for Six-Gun Gorilla, opening in the Congo in 1849. I was immediately struck by the thematic correlation to slavery that Christgau applies to the story, as white poachers hunt and trap gorillas for sport, for novelty, and for ultimate inclusion in the Circus of Frontier Wonders. There's a gradual power shift that occurs as Six-Gun is diverted from Africa, to London, to Ireland, and eventually to Arkansas and the American Frontier. He learns to wield the titular Six-Guns, reclaim his destiny, and via an “oh no!” cliffhanger in issue two, we anticipate a path that will see him apply those vigilante laws of the jungle to fabled Frontier Justice.
Sibar's art occasionally bore some too-grainy-for-my-eye reproduction qualities, and there was a glaring glitch in the way the script translated to the art, as four queens somehow beat four aces(?) in a poker game, but otherwise I really enjoyed the tonal match the aesthetics offered. There's a raw unkempt quality to Sibar's style, with scraggly-haired gorillas, the jutting silhouettes of exotic trees, and wild shotgun blasts in incredibly well-choreographed action scenes in these dusty sun-bleached towns. The art is an engaging blend of traditional layouts, inset panels, and free-flowing collage clouds, occasionally punctuated by dramatic full-page bravado, like the initial reveal of Six-Gun Gorilla, or the reveal of Professor Malloy's Circus. Considering how we're left, I'm certainly dying to see what's next.
Well, Jason “Sasparilla” Sacks and “Dead-Eye” Daniel Elkin, what'd you all make of this character “raised on Shakespeare, Dickens, and penny dreadfuls?”

It's a truism that there are no bad characters, and as a fan of Brother Power the Geek and the Green Team, I have to believe that's true. Who would ever have expected that a character as oddball and downright forgettable as the Six-Gun Gorilla would end up being the source for not one but two dramatically different takes on this character?
As you adroitly point out in your rootin-tootin good essay, Justin, this take on the brilliant African gorilla is dramatically different from Si Spurrier's spectacular scene setter. Cristgau and Sibar take their own tack on this weird creation, delivering a story that's surprising in many ways – surprisingly different from the other series that shares its name, surprisingly thoughtful and sincere in its approach to the character, and surprisingly deep in its implied parallels to American slavery.
You're so right Justin, about how this comic could be read in part as an implied parable about slavery. The scene of the gorilla's capture in Africa is wonderfully depicted, quietly but movingly in a way that accentuates the story; when he's transferred in a poker game from a heartless ass to the man who will love him, the reader pull for the gorilla, then when he lives a live outside the law it's as if he's a freed slave forced to live a life outside of society's norms
But it would also be a mistake to take that parallel too far. Cristgau and Sibar's take on the Six-Gun Gorlla trope is also a charming thrill ride, full of rogue gunmen, giant guns used for sharpshooting, and a family love unless any that's ever been presented in comics. This is one of those fun takes that's both thoroughly derivative and very unique feeling, amplified by Sibar's impressionistic art that is colored in a way that emphasizes the grit and roguishness of the Old West.
Elkin, are you ready to create your own take on this mighty gun-slinging gorilla? You drive me ape, you big gorilla.

Oh no. In our little comics criticism rendition of the Good, the Bad, and the Ugly, it looks like I've got the sour puss.
I hate to say it, but for me this take on Six-Gun Gorilla is as predictable as a heartsick young boy rhyming “love” with “dove”. As I read the first two issues of this series I kept wondering why the hell I should care about any of this. Haven't I encountered this story before, like a hundred times? Dressing  the hero of this well-worn tale in a gorilla suit doesn't add anything to its tired narrative except, perhaps, a rank smell.
When I get me an update on one of them there old properties, I want something new, by cracky. I expected Christgau and Sibar to subvert, hear them  rhyme “love” with “turgidity,” and then poke a finger in my eye with glee.
But, as we say down south, “that dog won't hunt.” Imagine my disappointment.
I'll accept that this is a solid book of sorts that moves along nicely, has some interesting art moments, and maybe tries for some larger thematic parallelism – but what? I'm going to tell someone to drop $4 on something they've seen before over and over again? Good god, kids, times are tough enough as it is.
Maybe this is why the Western has fallen by the wayside. There's only so many stories you can tell within its confines.  The genre limits possibilities and each mosey through its tropes follows an incredibly well-worn trail.  Hell, even my critical response to this series seems tired and cliched.