The Great Sabre Interview Part Six: the strength of his words is like a sucker punch

Jason Sacks for Comics Bulletin: The war really takes its toll on these characters. That's one thing that I had noticed all through the issues. I'm so used to comics where people are punched and kicked and shot, and it barely has an effect on them. Your characters really are feeling the aftereffects of the struggles that they go through. It makes them seem so much more human.
Don McGregor: My point exactly. That's exactly the point, Jason. To me, I know some people would prefer the hero comes in and kicks ass, and that's the end of it.
I'm trying to get inside the person's head that has to go through those hellish ordeals and how they react while it's happening. I try to live it, day in and day out, while I'm writing it, and then deal with the memories of going through that brutality; it's now a part of your life experience, so that further informs who the character is after living and surviving through the horror or insanity. For me, it's going back to all the pop culture I loved and trying to bring something that's totally mine to it.
I think that one of the influences of Ian Fleming's James Bond novels had on me, trying to make it as real as possible. The more outrageous I was going to be, the more I was going to try to delve into our common human responses

I remember reading Dr. No and there's a sequence where Bond is lying in bed and a poisonous centipede is crawling up his body. Fleming has thought every detail out. I remember actually stopping reading and saying to myself, "Wait, wait, wait, stop. Go back to the beginning of this scene," because I felt I was seldom going to read a sequence with such attention to detail. It described this intense, suspenseful situation, and I wanted to savor it.
The centipede comes crawling through Bond's pubic hairs and he feels his scrotum tightening up. Then it's questing up his belly and his belly flesh is kind of rippling. When it comes to Bond's throat, it stops. Bond realizes it's listening or feeling the blood pulsating in his jugular vein. Next, the poisonous centipede is coming up over Bond's chin, and he has to close his lips and then his eyes because it's crawling up his face. The centipede comes to his brow and suddenly Bond's hair starts to stand up on end and he hears this noise and he doesn't know what it is. Then he realizes the centipede's drinking the sweat off his forehead.
Aggh! Wow!
So I read this passage aloud in my English class in high school. The teacher wasn't too thrilled. Even I knew I had to skip over the paragraph about the pubic hair. I don't think I got expelled, but later I was saved because a couple of months after I did the reading, President Kennedy came out and said that From Russia with Love was one of his favorite books. The teacher needed a President to make Fleming legitimate, so now she said that I had good taste. Okay, whatever you say.

I don't need anybody telling me what is okay for me to love. Love is there. Or isn't.
So that scene that explains that. 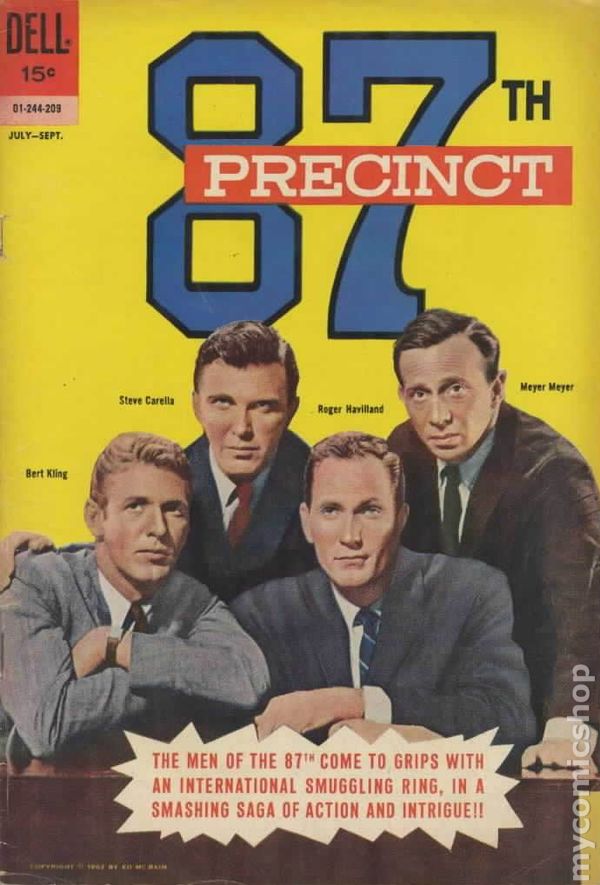 But probably the writer that affected me most is Ed McBain, aka Evan Hunter. Many years back, Dean Mullaney was reading one of the "87thPrecinct" novels, See Them Die, and he called me up and said, "I'm reading See Them Die, Don. This book, this book just knocked you all over the place didn't it?" I said, "Absolutely." There were so many sequences Evan did that struck me deeply with their humanity, their knowledge of the city, the quirky contradictions within human beings. I certainly never went back to read an "87th Precinct" book as I was doing Sabre. I would re-read them when Marsha was reading them, or Lauren, so I would recall what happened if they wanted to talk about it.
But the death of Willoughby, and its effect on readers, is probably profoundly ingrained in my head from Evan, who was one of the few writers that could bring me to tears, or to laugh aloud. The deaths in his See Them Die affected me deeply. For some who have read my stories, it is characters of mine that they cherished.
I remember the opening of See Them Die in Spanish Harlem and church bells are ringing. It's a Sunday morning, he's describing Sunday morning in Spanish Harlem and then some characters come out onto a front stoop. I was living in Rhode Island at the time, but by the time I came to New York, I understood the city, Evan Hunter's writing taught me about the city. Not up and down, not numbered streets, but the extremes of love and hate in the city and the ways of life within the city.
The last line of his on that Sunday morning reads: "Two people will die in this street today." I can't quote my own words in stories, but I can still quote Evan Hunter decades later.
Within the confines of the cover of that book he profoundly invested me in those people that I would never know except because of him. When I finally arrive in Manhattan and am staying up in Spanish Harlem, it's all there, there are no surprises for me, because he captured it and gave it to the world.
When I'm reading that book, as the day progresses and it comes closer to the end of the day, there are people I do not want to die, I do not know who is going to die, but he has told me it is going to happen. When it does, the strength of his words is like a sucker punch. He has made feel he has killed people I loved.

You have some of the Route 66 TV series on DVD, Jason. When you finally watch them, you'll have a better understanding of what I'm talking about here. Stirling Silliphant wrote a vast percentage of the episodes, and Stirling Silliphant is another writer who was a big influence on me. What Silliphant taught me, I've thought through the years, is that a story could be about more than what it first appears, that you could try to knock it out of the ballpark every fucking time! You might not succeed. You might only have a line or two that really nailed it, but you knew he was in there swinging with everything he had as a story-teller.
Even if some stories weren't as strong as others, it amazed me that he could, week after week, get out there and delineate characters that were not commonplace on the television landscape, tackle topics that tread where network suits would scarcely approve, and do it with courage and humanity.
As long as I'm talking about influences, and many of them are writers, but certainly Robert Culp and Bill Cosby personified in I Spy, one of the things I treasure deeply. I'm not much of a joiner, but I believe in individual friendship. The image of Denning and Rainier standing back to back in the rain swept alley, knowing they don't have to look to check if the other is there covering their back, is, for me, one of the iconic images that capture what I hoped to achieve with Sabre.
Robert Culp saw himself as a director and writer as well as an actor, so really Bob was another writer whose work spoke indelibly to me.

Recently I've read critics stating that the last Bond film, Skyfall's ending was influenced by Peckinpah's Straw Dogs, but I would have to say there's much more correlation with Robert Culp's script for the I Spy telescript he wrote, "Home to Judgment." In the episode, Culp and Cosby (Kelly Robinson and Alexander Scott) seek refuge from terrorists and saboteurs in an isolated country farm where Kelly spent summer vacations when he was young.
I Spy, as far as I am aware, was the first TV series where reading comics was not short-hand for a character being "slow." In the beginning, when the two first hide out in a loft in the barn, Kelly isn't sure if this is the place of his childhood. At one point he lies in near delirium, a fever caused by infected wounds caused by the shackles the saboteurs have had on his ankles He speaks in almost a dreamlike trance about the comic strips he read as a kid --The Katzenjammer Kids. The Phantom. And Terry and the Pirates. And then the nostalgia dissipates in his eyes, and he sighs, "What a lousy way to come home."
Anyhow, as in Skyfall, Kelly has returned home. When his aunt, who hasn't seen him since he was a child, begins to realize who he is, his Uncle holds him and Scott at gunpoint to drive them to the authorities. But the faceless assassins had put explosives under the hood of the old model car, and when his Aunt asks, "Who are you?" Kelly holds out the sticks of dynamite, and tells her, "You wouldn't know me. If you knew me at all, it would be as child who doesn't exist anymore. This is what I am now. And this is what I've brought you." And he holds the dynamite sticks in his hand with almost hopeless remorse.
They end up having to fortify the house and make home-made bombs as the stalkers move in for the kill. I suspect these days the script would have a lot of scrutiny about showing people how to make home-made bombs.
It's great stuff, guys. Check it out. There are episodes where Culp and Cosby read comic books. It just wasn't done in those days.
Come back tomorrow and hear more amazing behind-the-scenes stories about Sabre! And remember...