This Review Originally Ran on Comics Bulletin.
Sometimes, the most universal truths can be found in the smallest slices of life. That’s what makes independent documentaries so powerful, engaging, and entertaining. Not only do they show you little worlds to which you’ve never had access, but they oftentimes also tell the larger story of what it means to be human. Armed with this intellectual conceit, a bag of Funyuns, and a couple of Miller beers, Daniel Elkin curls up in front of the TV and delves deep into the bowels of Netflix Streaming Documentaries to find out a little bit more about all of us.
Today he and his friend Jason Sacks found 2012's Detropia, directed by Heidi Ewing and Rachel Grady. 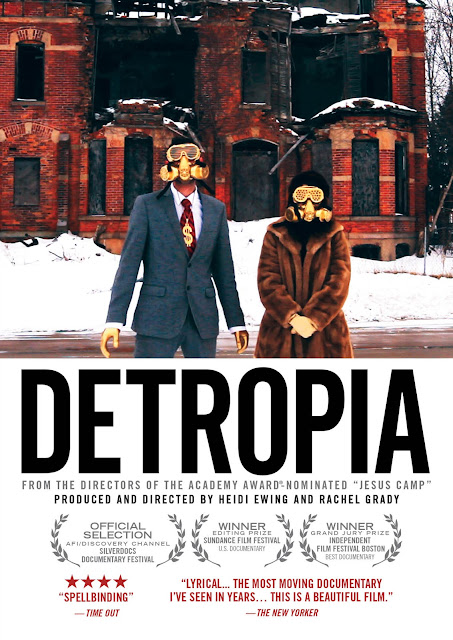 Sacks: The story of the first few decades of the 21st century can be seen as the rise of latter day serfdom. The world economy, combined with the power of incessant corporate greed, is creating a wider division than ever between the haves and have-nots. The rich are becoming fabulously richer, while the poor are sinking ever deeper into despair.
Detropia, directed by Heidi Ewing and Rachel Grady tells the story of the city at the epicenter of that great divide: the once-great city of Detroit, which is now literally falling apart.
Industry has abandoned this city while services are being cut ruthlessly. Families take flight from the city at a record rate at the same time that city planners work to knock down houses in order to consolidate the far-flung populace of the city in a smaller and more focused area. Houses are being foreclosed on at record rates, property values are plummeting, and unemployment is sky-high. Once-great buildings are skeletons of the places that they used to be.
Yeah, Detropia is a real downer of a movie.
This film is also a tremendously involving portrait of a city in decline, but filled with people who are valiantly fighting to keep the soul of the place alive. People are nothing if not adaptable – something that we also learned watching Happy, I might add! – and we see that attempt at adaptability on display in this documentary. There's something heroic about the men stripping an abandoned warehouse of its steel so they can earn some salvage fees. After all, in a post-apocalyptic world, we all do what we have to in order to survive.