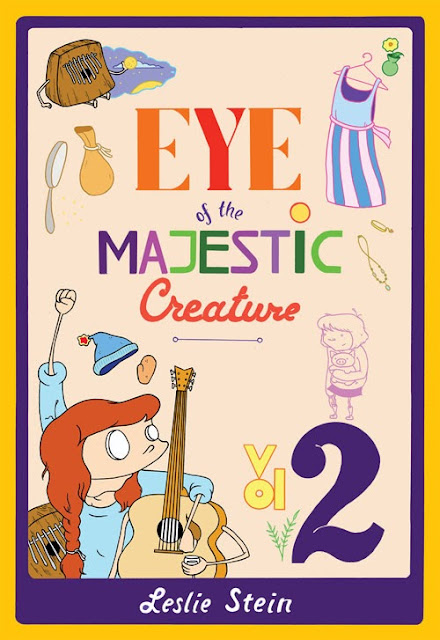 Leslie Stein is a detached observer. The problem is that her detachment is in a constant battle between itself and Stein's own overarching empathetic nature. In her comic Eye of the Majestic Creature, Stein wanders and stumbles through experiences. She notes them coolly with a seemingly flat affect, but the next moment? Well, that belies her heart.
If you have never read any of Leslie Stein's Eye of the Majestic Creature then you should do so.
Right now.
I'll wait...
The reason I'm talking about this is that Fantagraphics has just published the latest volume of Stein's work, Eye of the Majestic Creature Volume 2. This collection continues the story of Stein's semi-autobiographical and wildly wonderful alter-ego, Larrybear. Larry has moved back to the city in this volume and it is this experience that makes up the first third of this book. Larry echoes Stein's dichotomous nature and the character's story chronicles that war between head and heart with humor, intelligence, and profundity. What Stein does in this first part of the book is to draw parallels between Larry's world and the world of Theodore Dreiser's masterpiece of American Naturalism, Sister Carrie. In Stein's conception of the modern world, little has changed in a young urban woman's experience from the turn of the twentieth century to the turn of the twenty-first.

The second part of Eye of the Majestic Creature Volume 2 focuses on incidents in her character's past. These include when her mother brought a drifter along on a family trip to Disney World, hanging out during her mother's AA meetings, and being a kid in a band with people much older than she. Once again, the stories are told with Stein's detachment. She records the events without seeming to comment on them, and yet her choices in narration and perspective have their own emotional heft. Larrybear lives through each moment as it occurs, and she neither comments on them nor seems to engage them through any sense-making efforts. Yet through this, Stein pushes the reader to feel in order to understand. It's subtle, and in this subtly great power lies.
The final act of Eye of the Majestic Creature Volume 2 follows Larry as she takes a trip to meet her friend Poppin's father. Poppin's head is a flower, though his father's head is human, but this doesn't seem to be an issue for anyone in this book. Then again, Larry's best friend is a talking, heavy-drinking guitar named Marshmallow. This final section ofEye of the Majestic Creature Volume 2 is my favorite part of the book for its all-too-humanness, especially in the midst of the strange scenario of Poppin's relationship with his dying father.  Once again, Stein doesn't force anything. She lets it unfold with a casual sweetness, even in the midst of death and drunkenness and dysfunction. The story ends with the onset of change for Larrybear bred out of discontent and self-realization. The last panel in the book alone could be the subject of thousand word critique.

It also features a Booji Boy mask which brought back all sorts of memories for me – another moment of quiet connection, the kind of which this volume is full.
Leslie Stein is a voice for a certain aspect of her generation, the ones you see feigning ironic detachment while inside they are either all honest excitement or vast empathy. While it's just so much easier and cooler not to get emotionally involved, for people like Stein, that's just really not possible.
She's also in a pretty awesome band: Prince Rupert's Drops
You can order Eye of the Majestic Creature Volume 2 from Fantagraphics Books