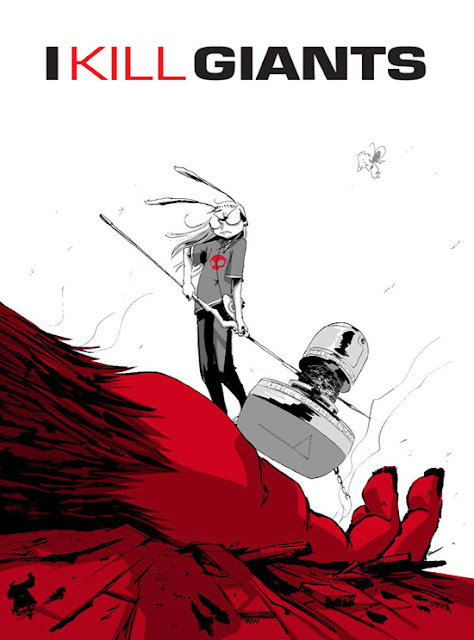 WARNING: THERE ARE SPOILERS IN THIS REVIEW

Aaron Meyers: Parents take a sacred vow when they have children. It's an unspoken pact: "I will keep you safe from harm, and let you grow into the adult you are meant to be so you can do the same for your children." Parents keep the evils of the world at bay the best they can, protect their home, their family and their children's innocence until the world can no longer be kept at bay. Parents kill giants, but sometimes the giants win.
What happens then? Imagination and fear make the evils of the world unconquerable. Giants everywhere threaten to destroy everything and only the brave survive. Or do they?  The book shows us that sometimes the only way to win is to give up and accept not all battles can be won. What Joe Kelly and J. M. Ken Niimura tell us that with this story are that not all wars can be won, and by fighting them we lose more of ourselves than we can fathom.

Daniel Elkin: Abandonment. In I Kill Giants abandonment is the subtext to the larger story. Barbara Thorson's father has already left, now her mother is being taken from her. How does this fifth-grade girl respond? By mustering to fight the greater enemy with the most powerful weapon at her disposal, her imagination.
Faced with the prospect of her mother's imminent death, Barbara decides to fight back. She uses the magic of her innocence to recontextualize the issue. She turns Death into a Giant and through this act, gains a level of power. A Giant is something she can fight against.
The Giants that Barbara imagines, though, are not the Fe-Fi-Fo type. Death is the great negation and, as a Giant, it strides heavy and destruction is its only intent: "A Giant comes to a place and takes everything from you.. and when it's done … it's like … whatever made your life good was NEVER THERE."  As an abstraction, as something she can comprehend, Barbara has the courage to take it on. Unfortunately, it is dealing with the reality of the situation that leaves her crippled and scared and alone.
And in this lies the power of Kelly and Niimura's book. I Kill Giants is a masterwork in that it takes you into the world of this one young girl and, through its pages, takes you into yourself. We've all dealt with death in our lives. I've lost friends and family to cancer and AIDS and heart attacks and suicide and random tragic accidents. Each time, through each loss, I've struggled to find meaning and purpose. I've seen young children left behind fatherless, lovers lost in their own sorrow, wives trying to fill the hole left in their life. There is resignation, there is vast sadness, there is confusion and chaos; however, at the end of the tunnel, each time, each life, each individual comes to terms with the loss. Each time they realize that they are stronger than they thought. And it is in this that we discover something important about ourselves. And in this we discover that we "must find joy in the living" while we can, "and not fear the end."

Jason Sacks: We must find joy in the living. That's one of those sentiments that is easy to hear and hard to follow.
There are so many moments in life that are full of pain, of anger, denial, fear and a strange sort of self-delusion that's necessary in order to not let the real life horror of the events that we're experiencing control our lives.
Probably the worst few weeks of my life happened when my father was dying of lung cancer in 2005. The weeks in which my father seemed to be wasting away from his cancer and we saw his inner light and spirit slipping steadily away from him is one of those experiences that is indelibly burned into my mind. There are so many moments from his passing that will always be close to the front of my memory, most especially a tremendously painful Thanksgiving dinner in which my dad had just small flickers of recognition of his extended family and beloved grandchildren. To this day, every Thanksgiving in our house is dedicated to my father, with love and respect and a wonderful touch of nostalgia.
There's not one of us who reaches middle age who doesn't have a tragic story to tell about a friend or loved one who has passed, and about the pain and void that loss has left inside them. One of the few saving graces of facing that loss when you're an adult is that, well, you're an adult. You've had significant experiences in your life and hopefully on some level found a way to enjoy the high points and do your best in the low points and not let the events you've experienced change your life and mess you up inside.

But it's all different for a child. A child has no walls, precious little experience, no perspective on the pain of a parent's illness. A child is dependent on their parents, by default, and the lack and loss of a parent can cause profound issues that haunt them later in life. The loss of a parent for an adult is a profoundly dislocating experience; the loss of a parent to a child can literally alter that child's life in ways that can change the rest of that child's life.
So when we meet Barbara Thorson in the pages of I Kill Giants, we see a girl on the cusp of exactly those sorts of changes. Though we don't learn it until partway through the book, Barbara's mother is dying (and her father has left the family) and she is facing the strong possibility of a life without any adult figures who can influence her life. So Barbara reacts the way a child perhaps should react to events like these: she retreats to her own fantasy world and creates a mythology where she can kill the giants who are the cause of her mother's disease.
Because there's no more evil and pernicious giant than cancer.
This is a beautiful and moving book, in great part because of its wonderful interior-exterior feel. Readers are shown events subjectively, through Barbara's eyes rather than through a realistic objective perspective. JM Ken Niimura gives us a view of the world that's at an acute angle to the real world. It's all skewed perspectives and rough panel borders and strange creatures out of the corner of your eye and it all adds up to give the reader a unique perspective on the way that Barbara is thinking and the ways that she tries to make sense of her incredibly painful world.

"I belived. I…I fought so hard. So hard. There isn't anything I could have done…was there?" - Barbara

The final stage of grieving: Acceptance. When we finally accept the things we are powerless to change, we set ourselves free. Denial, anger, bargaining, trap us in a prison with the Giants of our own making. Once we can accept that which can't be changed, only then do we find freedom to live again. Barbara finds the key to her prison, she sees the battle as something she could never win, with time to share comfort and love before she loses her mother forever. The book starts with fear and rage and ends with love. We learn through this child's eyes that life is full of Giants, some we can face and overcome some we can only accept.

"Life is for the living. Death is for the dead. Let life be like music. And death a note unsaid." - Langston Hughes

This book ends on a beginning. Family carries, the only thing certain. Giants of all sorts loom out in the world, but she is now equipped to take them on. Strength is found inside. Love is stronger than any hammer and life is to be cherished and lived.

Aaron Meyers is a full time nerd for both money and pleasure. When he's not knee deep in networking cable or trapped in a server rack, he can be found on Twitter at @aaronmeyers or posting his musings about the world of comics or whatever strikes his fancy at his blog Proactive Continuity.