Today he and his friend Jason Sacks found 2011's The Pruitt-Igoe Myth by director Chad Freidrichs. 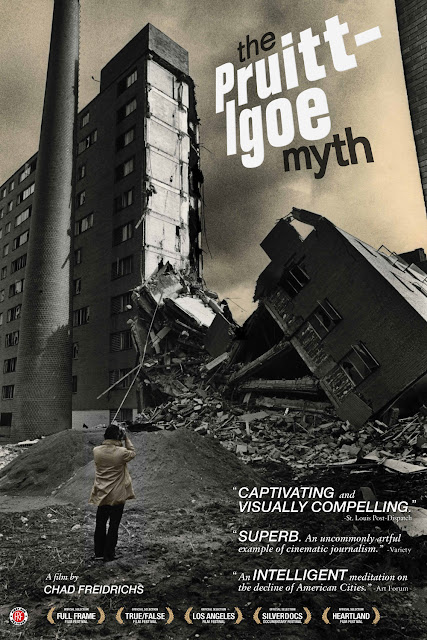 Elkin: The Pruitt-Igoe Myth is a thoughtful, albeit dogmatically one-sided, documentary about public housing, urban development, the role of government in social engineering, racism, suburbanization, politics, hopes, dreams, and failure.

In their press materials, the film-makers say that they made this documentary with two specific goals in mind. “One is to inform and enhance the ongoing debate over public housing and government welfare programs.... Second, the film will illustrate how conclusions are dangerously and erroneously drawn when powerful interests control debate.” These are lofty goals, and, while the film does a good job exploring these two ideas, it is why it ultimately fails for me as a documentary.

The film's agenda gets in the way of what I look for in good documentaries. I prefer my documentaries to “document,” not lecture -- to reveal, not point at. While I appreciate the work that Freidrichs has done by putting together The Pruitt-Igoe Myth, its exhortative nature raised my hackles.

This is not to say that I disagreed with most of the various theses posited by this film. I agree that there are systematic failures that have been built into governmental housing policies since the 1949 Housing Act was signed, and that these are a result of both greed and a fundamental underlying racism. The Pruitt-Igoe Myth does a fine job of delineating these failures and drawing the connections to create a larger picture.

But its one-sidedness and omission of counterpoint undermines the film's documentary nature, to its detriment.

What were your thoughts, Sacks?

I actually found myself a bit fascinated by the clear and distinct differences between the perception of the general public about public housing, and the actual truth of life in the projects. It’s true that the projects were terrifying, crime-ridden, poorly maintained hellholes for many of their years, but they also represent two other important items: they were peoples’ homes, and, maybe most fascinating to me, the Pruitt-Igoe Projects represent the great gap that society can have between good intentions and inept follow-up.

Pruitt-Igoe was built with plenty of positive values – families would be moved out of the slums, the city of St. Louis would be able to handle its expected massive population growth, and businessmen would have the ability to develop valuable land that would be useful for businesses. It was the epitome of a win-win for everyone. And in fact the apartments opened with great fanfare. One woman talks about moving into the “poor person’s penthouse”, an apartment on the tenth floor of one of the many buildings of Pruitt-Igoe.

But that excitement soon turned to despair as the apartments were basically forgotten and fell victim to exactly the same sort of despair that the urban planners professed to be interested in fighting.

I was intrigued and horrified by how the city of St. Louis essentially forgot about these developments and the people who lived in them. They left the complex to complete neglect, refusing to spend money to fix things like broken sewers and windows.

But the story isn’t quite as simple as that recitation of facts makes it sound. At the same time that it neglected its poorest citizens, St. Louis also suffered a precipitous drop in population – the largest drop of any city in the United States during the period covered in this film. The citizens of that town moved away from the inner city and towards the suburbs, or completely out of the state, meaning that St. Louis’s declining tax base and lack of jobs were strong contributing factors to the decline of the Projects.

Simply put: while there was plenty of blame to be assigned for the hellish conditions in the Project, there’s no one person responsible. It’s the worst of all evils: something that can’t be blamed on anybody.

So I liked the moral complexity and ambiguity of this movie a lot. Elkin, what did you make of the complex picture of society that this movie paints? 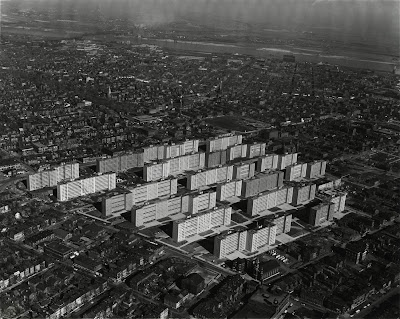 Elkin: One thing the filmakers say about their film is especially interesting to me and basically sums up why I thought The Pruitt-Igoe Myth deserved our attention this week. They write: “History is a contested space. It becomes used politically and culturally. Arguments become flattened, rather than expanded; available evidence discarded, rather than sought … This is why Pruitt-Igoe matters... So much of our collective understanding of cities and government and inequality are tied up in those thirty-three high-rise buildings, informed by the demolition image.” These two thoughts, history being a “contested space” and the power of images to convey attitudes about particular subjects are important things for us, as thinking individuals, to ponder.

The idea of history being a contested space is clearly evident in this film. The fate of the Pruitt-Igoe housing project has clearly been framed as a clear example of the failure of this sort of government intervention and social engineering. The film-makers want us to realize that this is not necessarily true, and they outline a rather detailed argument to show the viewer alternative interpretations to the historical narrative. Wasn't it Churchill who said, “History is written by the victors”? I think that in the case of Pruitt-Igoe this is what has happened., and, by the film-makers showing this to us, we, as an audience, can perhaps look at our other preconceived notions of cause and effect with a more critical eye.

The power of images to create attitudes, both political and emotional, is another kettle of fish. I was thinking about launching into an examination of semiotics here, but this is probably not the place for such a thing. Rather, let me put this idea more into the context more relevant to this discussion.

For around the last ten years of Pruitt-Igoe's existence, the images coming out of it were specifically designed to further a narrative. That story was: these places are dangerous, the residents are animals, and socialized people (read: White Middle Class) should be afraid and should feel justified in abandoning the city to move to their suburban ranch house manicured lawn dreams. The pictures broadcast by the media of what was going on at Pruitt-Igoe were shown to assuage any guilt people may have felt for leaving St. Louis, as well as reconfirm a previously established racial stereotypes. This furthered not only the inherent racism that existed in our country, but also allowed those in power to then cite more evidence that government doesn't work in these situations and then foster their politics of personal responsibility and the power of the private market.

But it's a manipulation of cause and effect – through this lens, the narrative is distorted. The power of imagery is often abused in this manner, and it takes a critical sensibility to realize it. While “news” and “history” is rife with this sort of underhanded political skullduggery, I wonder how pop culture is affected by this sort of thing? 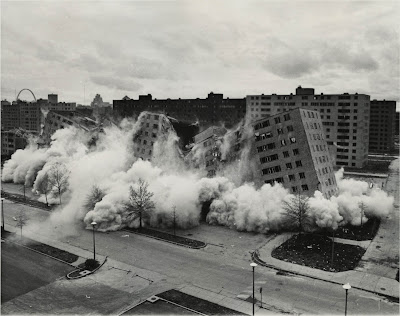 Sacks: Which is part of why it’s so entertaining to watch a good documentary – or at least a documentary that takes a contrary position to the standard viewpoints that we get of the world. I love to watch an argument go against the standard collective wisdom, show that there really are different sides to the stories that our media show us, learn that the world is always more complex than we are told that it is.

A great documentary has the power to change your mind, to persuade you that something you previously felt was true actually isn’t. In that way, The Pruitt-Igoe Myth isn’t a great documentary. It didn’t change my view of the issues it discussed as much as it colored those issues in deeper shades of gray. This movie added more ambiguity to my life, more complexity, more of a move away from the distorted narrative that I had previously taken for granted.

The movie makes the case quite persuasively that society has blamed the victims for the utter desolation of the Pruitt-Igoe Apartments, but that also feels a bit simplistic to me. The case is made strongly that a lack of attention led to the downfall, but there is a bit of truth to the myths that we both reference above: if the people living in Pruitt-Igoe hadn’t taken part in the destruction of these apartments – if they hadn’t engaged in crime and peed in the elevators and thrown trash on the floors and broken out the windows, then the apartments would have lasted much longer than they did.

While society avoided its responsibility, so too did some of the residents of the apartments, who were unable to prevent the terrible vandalism to happen to the place in which they lived. So I don’t see the manipulation of cause and effect that you condemn above to be much more than the media’s endless zeal to tell a good story, not some sort of manipulative skullduggery.

I’m not blaming the victims. I’m just saying that there are some truths on both sides of this story, some truths that make this documentary so fascinating. It goes against the grain and tells untold stories. While The Pruitt-Igoe Myth is not a great documentary to me, it is an important counterpoint to our urban myths and sheds an important other dimension on topics that I had once thought were more or less settled. 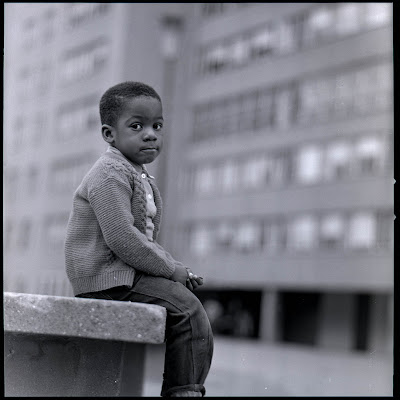 Elkin: I guess you can say that we both agree that The Pruitt-Igoe Myth, like so many of the documentaries we have looked at together, Sacks, is maybe not the most successful film produced, but at least it raises some interesting issues for us to think about, while at the same time tells a little part of the story of what it means to live in a society. How we treat those who live among us guarantees how we end up living ourselves.