You know, I'm beginning to think that either I'm one of the luckiest men alive or the rest of you people have no fucking idea what you are doing anymore. I base this solely on the fact that my random pick out of the bargain bin this week was completely awesome and it only cost me 50 cents.

So, let's look at this for a minute.

I got to have a whale of a time for just fifty cents. You can see how this might make me think that I'm a really lucky fellow. So lucky, in fact, that I have decided now to sell everything I own, hop the bus to Reno, and amass a small fortune which I can then turn around and reinvest in whatever the hell I want to because it is guaranteed to make me a ton of money because I. Am. So. Fucking. Lucky!

The other side of the coin is that I got to have a whale of a time for just fifty cents because the rest of you people found The Sea Ghost #1 to be of no value as an entertainment commodity anymore and have cast it off into the bowels of the bargain bin. What is wrong with you people? Have you no soul anymore? Can't you just have fun for the sake of having fun and then cherish that, hold on to it, value it for longer than thirty fucking seconds?

Ultimately, either of these options is a bit dangerous. The first one, if true, is a bit grandiose and, if untrue, will lead me to ruin. The second option is disheartening as hell and, if true, will start me glaring at you again, won't it?

Maybe there is a middle ground? Maybe I shouldn't worry so much about these things? Maybe I should just enjoy the fact that I got to read The Sea Ghost #1, do my little dance of satisfaction, and then put it on my pile of things that I know I can turn to on those sad days that will make me smile wide (a pile, I should add, that is growing larger and larger all the time – so suck it, Mr. Blues). 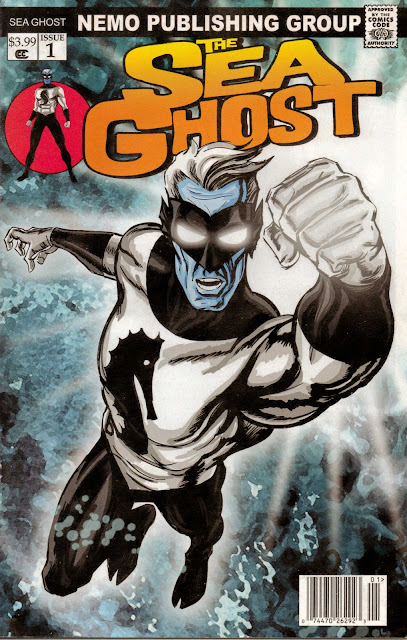 The Sea Ghost #1 starts off with a sweet little splash page featuring Capt'n Eli and his pals Jolly Roger and Barney the Sea Dog. 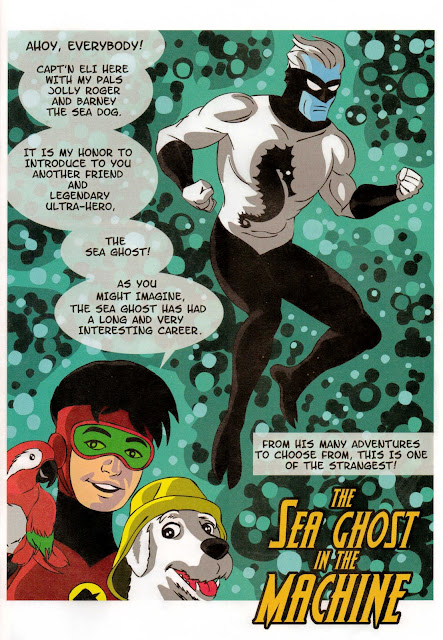 These charming poppers are from Jay Piscopo's other book, The Undersea Adventures of Capt'n Eli. I guess this is some sort of cross-over or spin-off or whatnot, but that doesn't matter one bit because this comic is all about The Sea Ghost and no background info is necessary.

By the way, please notice the sub-title of this adventure, as there is a payoff in the end.

So – The Sea Ghost lives “within the undersea ruins of Atlantis” in the “Ghost's Grotto” (Awesome!) with his children, Coral and Triton. While hanging out one day, The Sea Ghost gets an urgent message from Commander X on “Scramble Channel D” (Awesome!) that a “Temporal Displacement Energy Field” (Awesome!) has formed nearby. As it is “off schedule for the Time Vortex” (Awesome!), The Sea Ghost feels he should probably investigate. 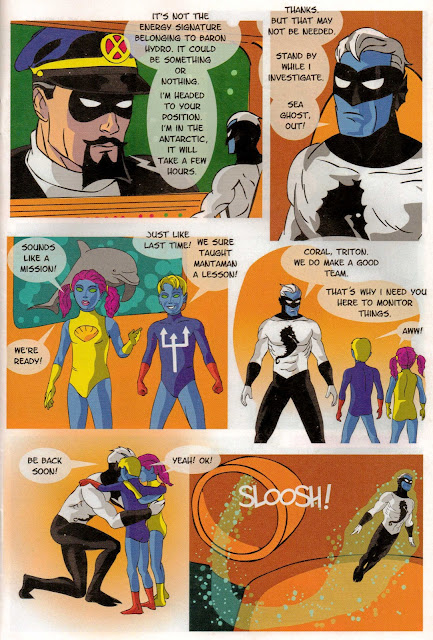 The Sea Ghost loves his kids. When he leaves the “Ghost's Grotto” it makes a SLOOSH noise.

It turns out that the source of the “Temporal Displacement Energy Field” (Still Awesome!) is this oddly shaped vehicle or something. The Sea Ghost kinda falls into it for some reason, and then we get this: 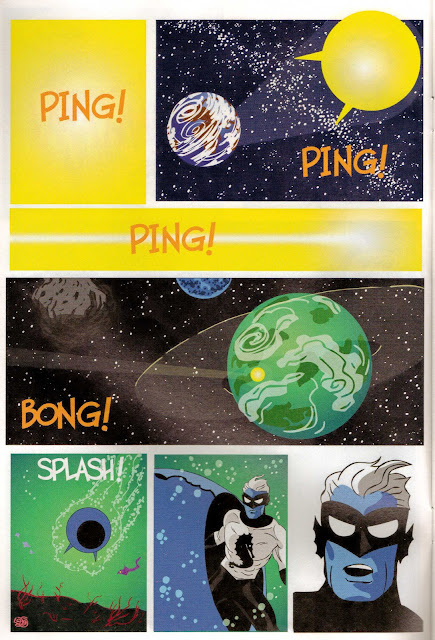 That's three PING's, one BONG, and a SPLASH for those of you keeping score at home.

The Sea Ghost finds himself on another world or in another time or through another dimension. Here there are guys riding hairy sharks who capture The Sea Ghost and take him before their Queen. She is Queen of the Phlan (one of my favorite Mexican deserts, by the way). The Queen tells The Sea Ghost about the war they are engaged in with their enemy, The Simas, who live on the land – and that this Endless War is all for the glory of Vorrgoth. 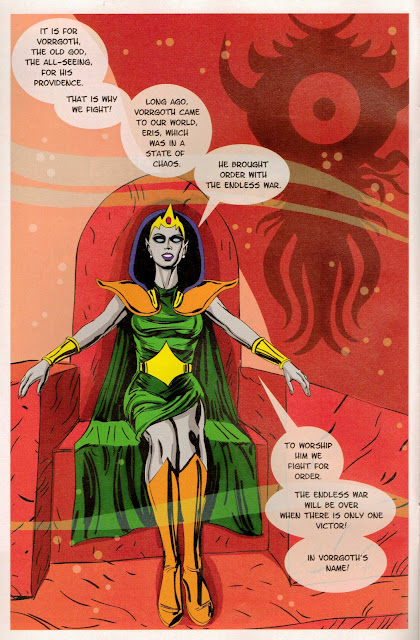 Vorrgoth is one of The Old Gods (Awesome!) who has “brought order with the endless war” which “will be over when there is only one victor!” (Aweso... wait, what? How does an endless war have a victor? – ah, fuck it, it's Awesome!)

The Sea Ghost is nonplussed by the idea of a god creating an endless war, and decides that his sense of morality is by far more correct than this entire planet's (time/dimension/whatever). He wants answers as to why he has been brought there, by golly, and he's gunna get them by hook or by crook. The Queen tells him she's got no answers for him and that he should go talk to the Simas.

So off he goes.

With a SKLASH he leaves the ocean and heads to the land. As he approaches, though, the Simas shoot him down with a VREET and a KRUNK. Brought to the Simas' Palace, The Sea Ghost sees more signs of the influence of Vorrgoth. The Simas King thinks The Sea Ghost is fighting for the Phlans and orders him to be taken to the Dungeon.

In the Dungeon, The Sea Ghost meets Diogenes (Awesome!), former Advisor to the Simas King. He tells The Sea Ghost that his arrival had been foreseen. Diogenes had a vision of the reality of Vorrgoth (Awesome!) as “The Horror in the Ice” (also Awesome!), an “ancient being that feeds off the psychic energy of the victims of war” (Oh my Awesome!). Diogenes also foresaw that The Sea Ghost would free the Simas and the Phlans from Vorrgoth. 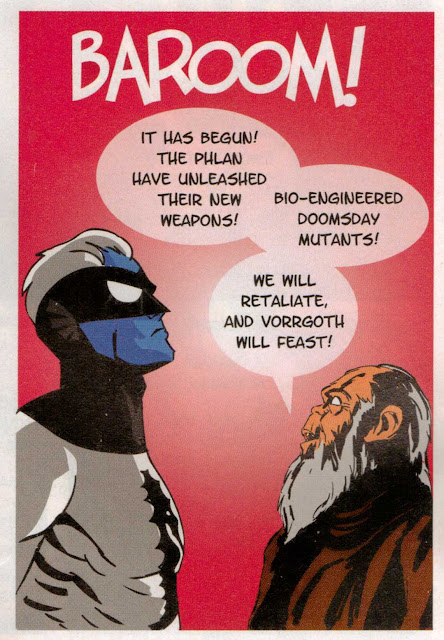 The Sea Ghost takes matters into his own hands and deals with the Bio-Engineered Doomsday Mutants the only way a Sea Ghost can. 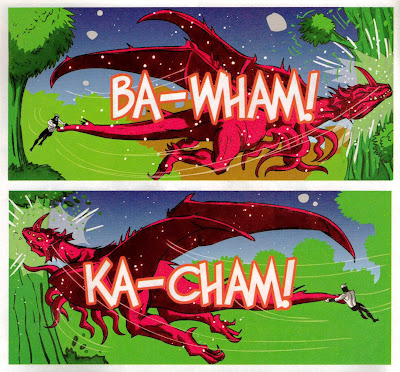 What else would it be?

The Sea Ghost then makes the King of the Simas and the Queen of the Phlans accompany him to get to the heart of their conflict. Yes, the three of them are going to confront the Old God. They are going to join forces and take the Endless War back to its progenitor. It's a Vorrgoth throwdown, which can only be AWESOME!. 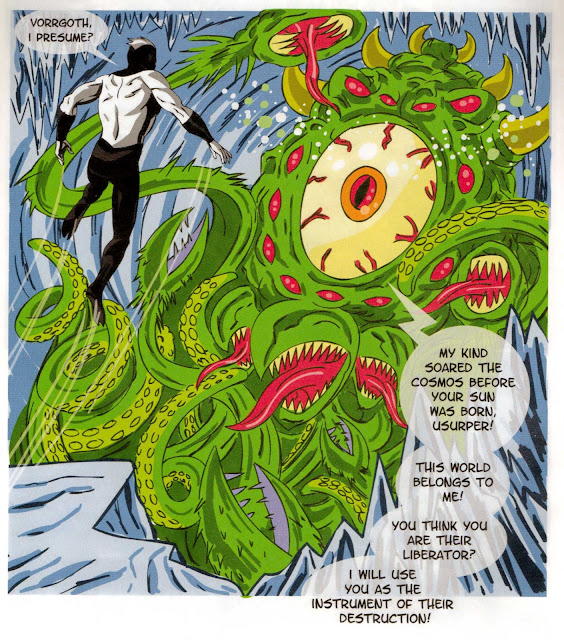 I think this is beyond great, beyond wonderful, beyond AWESOME. Jay Piscopo's Vorrgoth is GREADERSOME!

Remember, I got this for fifty cents.

Anyway, working together, the three heroes are able to CHA-DOOM the crap out of Vorrgoth, which breaks his “tether to this plane!” (Awesome!) and ends his influence on the Endless War.

With The Sea Ghost's destiny fulfilled, the question of getting him home suddenly arises.

Remember when I told you to pay attention to the sub-title of this comic.

Do you remember what it was? 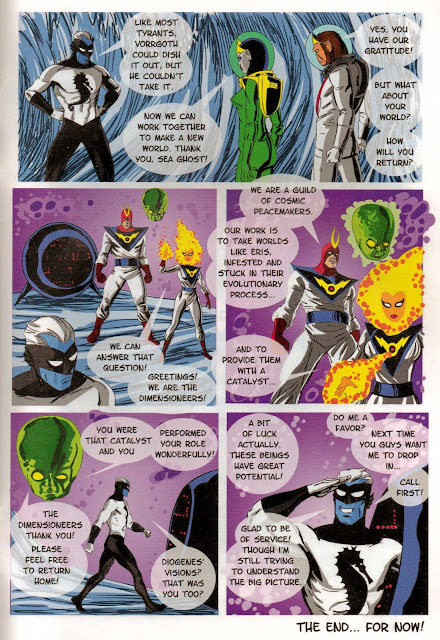 Oh yea, The Sea Ghost in the Machine. Out of nowhere – BOOM – the Guild of Cosmic Peacekeepers!

And that's how it ends, my friends.

How great was this comic? It had everything you could possibly want. You got a clear hero acting heroically (albeit a little xenophobic, but whatever), saving an entire planet from the influence of something clearly evil. You got your Lovecraftian Old Gods! You got your Bio-Engineered Doomsday Mutants! You got your beautifully onomatopoeic sound effects! You got a guy who loves his kids! You got Dues Ex Machina out the yin-yang! You got action! You got color! You got everything...

And I got it for fifty cents.

I hope it's because I am lucky. Not the luckiest man in the world, though, just the normal everyday stumble-bum out-of-the-blue, ain't that a ko-inky-dink kind of lucky. The finding a five dollar bill in your pants pocket kind of lucky. The Meeting up with a friend whom you haven't seen in twenty some years because you wanted to go see Daniel Clowes read at City Lights Book Store in San Francisco and later realizing that she is the girl of your dreams kind of lucky (the best kind of lucky there is).

Because if I'm that kind of lucky, then finding The Sea Ghost #1 in the bargain bin was just happenstance. Somebody forgot how great this book was, or they needed cash badly to pay their rent, or their new boyfriend was moving in and she needed some space in the closet so she sold some of her comics – and that's how this book ended up where it did – in the bargain bin – and then into my hand.

Because if you people are seriously treating your awesome entertainment the way you treat your reality show superstars – just tossing them away when something new and shiny comes down the pipe – then you and me, we're gunna have to talk.

And believe me, it's not a conversation either of us will enjoy.

See you in two weeks.