Random Pulls from the Bargain Bin
THIS COLUMN ORIGINALLY RAN ON COMICS BULLETIN
In these economic times, finding inexpensive entertainment is difficult. Thank goodness for the local comic shop and a slew of comics nobody cares about anymore! Each week Daniel Elkin randomly grabs a comic from the bargain bin (for 50 cents) to see what kind of bang he can get for his two-bits. These are those tales.
September 14, 2011 – paid 50 cents for:
NECROWAR #1
Published by: Dreamwave Productions
Written by: Simon Furman
Art by: Adi Granov 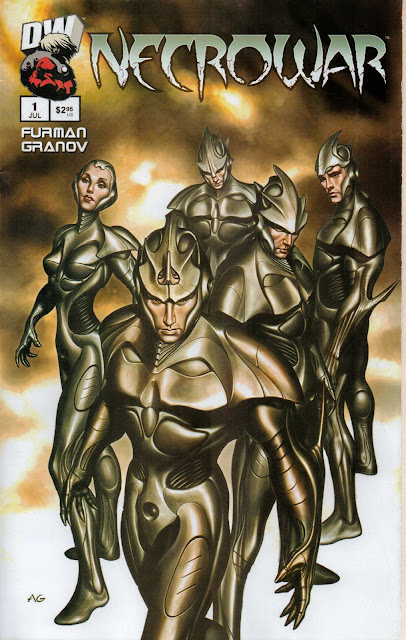 THE PLANET IS SOUP.
I can’t believe I have to relive July of 2003 for this week’s column.

July of 2003 was when Nike bought Converse for goodness sake. It was also when Valerie Plame was outed as a CIA operative in the Washington Post by that stale loaf of moldy bread Robert Novak. It was when that 86-year-old still-driving-and-drooling motherfucker had a “senior moment” in Santa Monica, CA and hit the accelerator instead of the brakes mowing down ten people, including a three-year-old girl and a seven-month-old boy. It was also when Pat Robertson called for a “massive prayer offensive” to try to stack the United States Supreme Court with conservative justices.

July of 2003 saw the deaths of Buddy Ebsen, Bob Hope, AND Barry White. It saw the cancelation of Digimon: Digital Monsters and the premiere of Queer Eye for the Straight Guy.

Viennese doctors even transplanted a human tongue in July 2003.

All of this and, thanks to that yokel in the flight suit a few months beforehand, we were still under the impression that in Iraq, “Mission Accomplished”.

Honestly, even if July, 2003 was a cute puppy I would still have an urge to piss on it.

Into this mess of a month came Necrowar #1 from Dreamwave Productions.

Do you remember Dreamwave Productions? Founded in 1996, Dreamwave cut its teeth on Transformers, spewing out all sorts of series based on the franchise. Then in January of 2005 they went belly-up and stuck their freelancers with some of the company’s debts.

Because of this and the fact that I had to remember July of 2003, I am already predisposed to hate Necrowar #1. I will rise above this petty subjectivity, though, as I am a professional and it is my mission to examine the work for what it offers in and of itself. 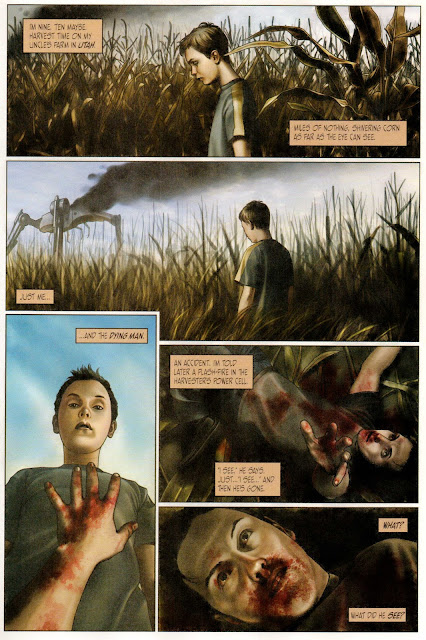 There’s a boy and he finds a dying man. Really, you know that’s how I want my entertainment -- disturbing, bloody, and totally out of nowhere. Please continue, Necrowar #1.

In the next couple of pages, the narrator ruminates on dying. His name is Damien Arnaz and he says that all his life he’s “been chasing death…” He goes on to reveal the tragedy of his life. His parents died in a “road accident” when he was young and this, coupled with the dying man discovery, seems to have given his life meaning insofar as it compares with death. Pretty heavy stuff, actually, which gives Arnaz a layer of characterization I was not expecting.

Arnaz has joined the Alliance Forces in order to court his own death and ends up being part of an elite force. He blames this fact on a woman. 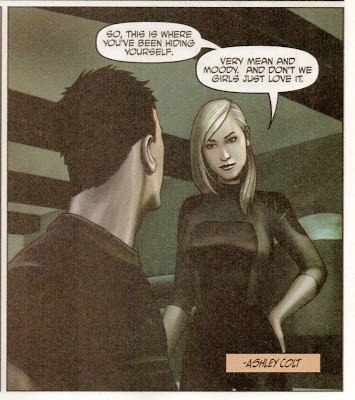 Now I have some problems with this Colt character right off the bat. First off is her name. By calling her Colt, are we as readers supposed to instantly internalize that she’s a bit frisky? Second, look at her. What’s with the hand on the hip? Is she a subconscious fashion model that just can’t help but pose? And finally, what is that garbage she is babbling? Is she supposed to be ironic and therefore clever? Or is she serious and therefore kinda creepy? I don’t know, but after all of Arnaz’s waxing about death, Colt’s sudden appearance throws me.

Or maybe that was the point, to provide the juxtaposition between death’s brooding nature and life’s sexy posturing? Is Simon Furman not pandering but playing with metaphors? Hmmmm…. Maybe there is more to Necowar #1 than I expected.

The comic then cuts to an office aboard the S.S. Desdemona (hmmmm… a Shakespearean reference – but pointing to what exactly?) where we meet a general and an admiral having this conversation:

The planet is soup? I like soup. Why is this bad?

But which troops will they be sending into the soup? I have an idea, but first some gratuitous nudity. 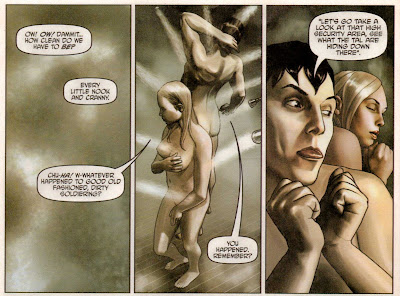 I am sure this is all leading up to something. Something about the soup, probably. The scene does characterize the relationship between Arnaz and Colt, though. Colt fucked up somehow along the way and brought Arnaz into that mess. This adds another layer to this relationship, one that is fraught with narrative possibilities. That, and they’re naked.

Which brings me to a short discussion of Adi Granov’s art. I have a love/hate relationship with digital art, but in the hands of a true artist it can have an amazing aesthetic. Granov is such an artist. The work he did with Warren Ellis on Iron Man: Extremis still resonates for me as a great example of how a digital artist can bring some interesting stuff to the world of comics. Granov’s art in Necrowar #1 often shows this too.

Look at this page, for example: 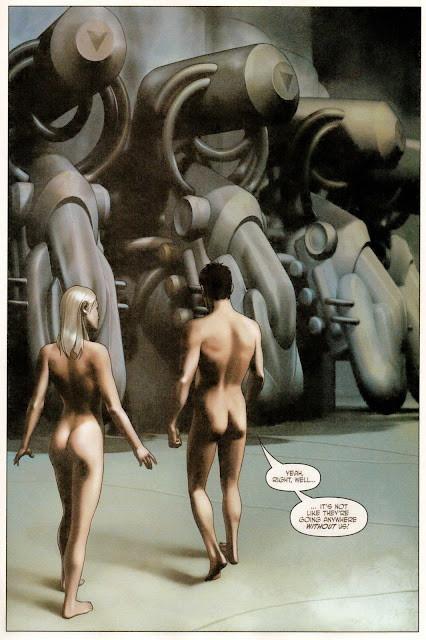 Sure the colors are muted and muddy, but the artwork itself has enormous complexity and depth. You get a real sense of the massiveness of whatever that machine is. The perspective of the figures also harkens back to some famous paintings of the expulsion from the Garden of Eden. In what I thought for sure was going to be a throw-away book, Granov’s art is captivating.

The Admiral explains it pretty well.

The soup is actually a reality altering attack force known as the Progeny who hail from the Dark Matter universe…. I think. And the Progeny are unstoppable. But desperate times call for desperate measures. 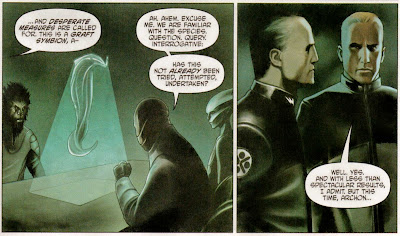 Turning the page reveals the connection between Arnaz and Colt’s earlier nudity and the Progeny invasion. The Graft Symbion… well … it grafts symbiotically. 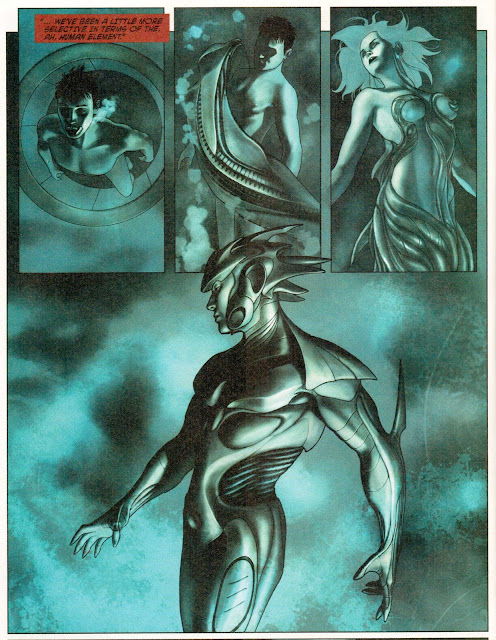 Once our heroes are all suited up, it seems only appropriate to introduce the bad guys, the soup makers, the Progeny, and they are baaaaad-assssssss! 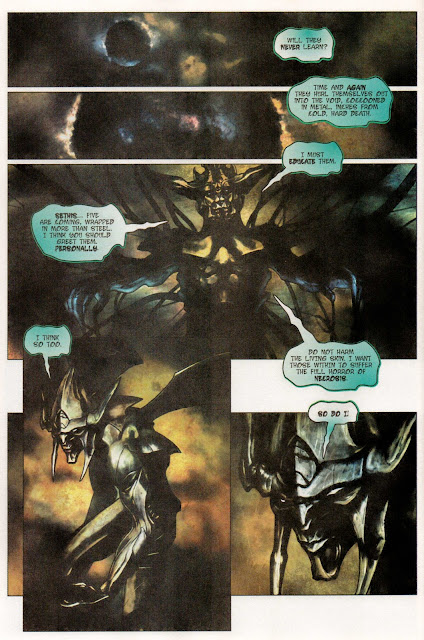 Granov has depicted them in a way that they look as if they smell like maggot covered cat vomit next to a dumpster full of soiled adult diapers that are baking in the sun on a hot summer day. Do you get that too?

Next there are a couple of pages where Arnaz jokes around with other members of his team known as the Ebon Squad. There’s a short discussion about the afterlife and the soul, and then the team takes off for the soup.

The soup is actually not chicken noodle, it is the planet Archtu Ulitma. The team is to extract some ministers and their staff who are “holed up in a government security bunker.” But when the Ebon Squad shows up, everything is all catawampus. 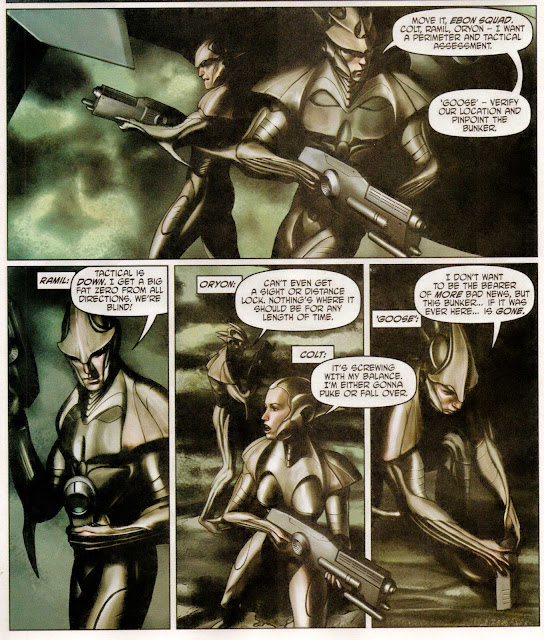 Even Goose is all fucked up by the situation.

They turn around for just a moment, and suddenly their ship is gone. Things then go from bad to worse. 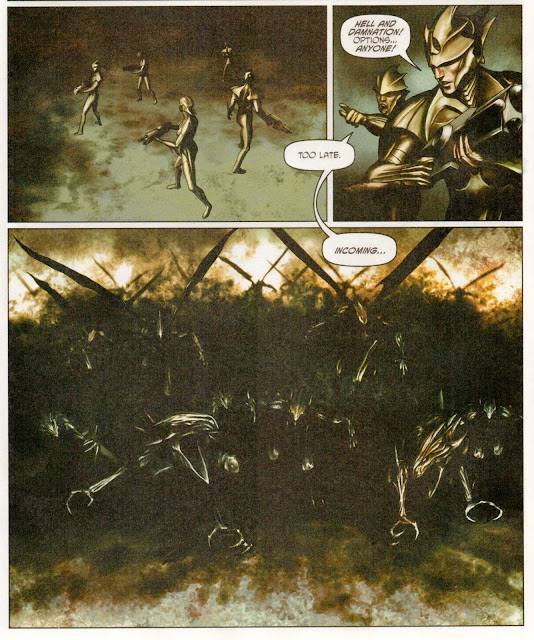 The Progeny swarms the Ebon Squad whose symbiotic suits provide no protection from the onslaught. 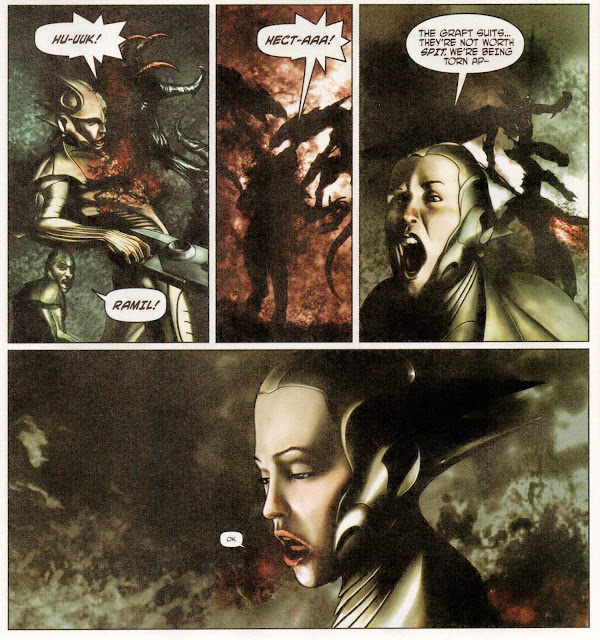 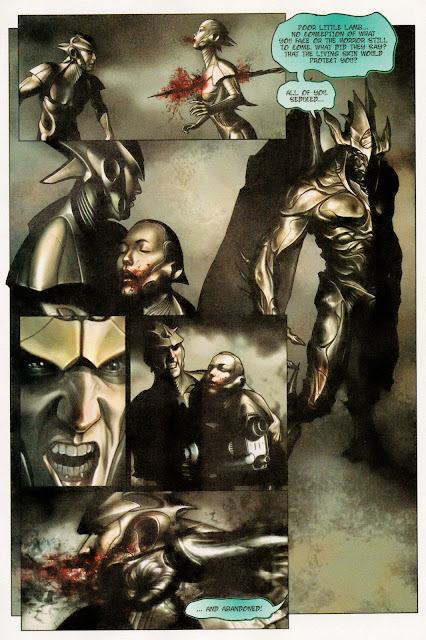 Well, that was quick. What was the point of all the characterization of Arnaz and Colt if they are just killed off in the first issue? What is the redemptive nature of this tragedy? Sure, Arnaz’s ruminations on the nature of death seem to have come full circle, but what lessons are the reader to pull from this narrative other than to avoid the soup?

I’m kind of pissed off, actually. I wanted there to be a little more substance to the ending of this comic. There were a lot of things in play here which have been quickly subsumed by the characters’ sudden deaths. Was Simon Furman just teasing his readers? Was this just some cheap parlor trick to wonk with our emotions? I demand satisfaction! I paid fifty cents for this hollow piece of crap. I feel cheated. I want to start lighting fires around my town and blaming this comic for my …. 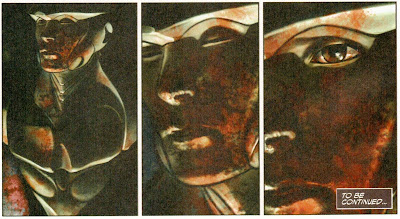 Oooooh. Down but not out, huh? Simon Furman, you cheeky bastard. Now you got me hooked. Now I want more. Now I am obsessed with finding out what happens next.

Kudos to you Team Furman/Granov. You’ve played a fine game of bait and switch here.

As it turns out, my two-bits for Necrowar #1was fifty cents well spent.

Necrowar #1 certainly surpassed my expectations (which were, I admit, about as low as I could muster). The story was engaging, the art was mind-blowing at times, and they talked about soup. What’s not to like?

In researching this title, I found that there were only three issues of Necrowar ever produced. There seems like there is a lot more to this story than only three issues worth. Was it a premature cancelation? Did the story wrap up and lead to something else? Does anyone know anything about Necrowar?

Please tell me if you do as I am now kind of hooked.

And I’m hungry for soup.