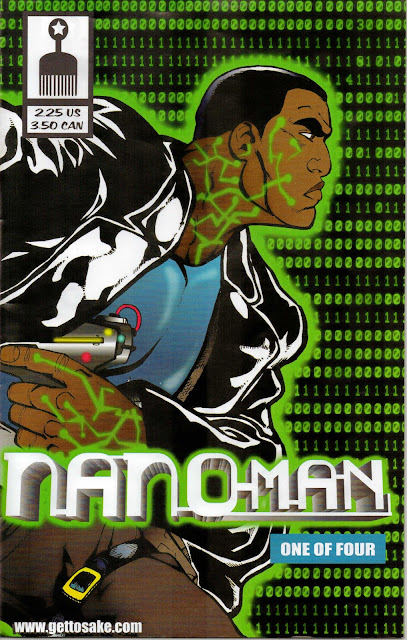 THE GURNEY!
It was the year 2000. We had survived the onslaught of Y2K, yet were disappointed that we weren’t living in some sort of techno-utopia with no wars, synthesized food, animatronic prostitutes, and flying cars. At the end of the year, America had elected George Bush to be our 43rd president.

Sometime in the midst of our celebrations and disappointments in the year 2000, Gettosake Comics released Nanoman #1.

My on-line research uncovered very little information either about Nanoman or Gettosake Comics. All I know about Gettosake is that they hailed from Elk Grove, California, and they had a really cool name.

Gettosake Comics seemed to have high hopes for their four issue Nanoman mini-series; they seemed to be trying to position themselves as one of the leading publishers of comics produced by African-Americans that featured African-American role models.

I found Nanoman #1 in the bargain bin with all the other high hopes, relegated now to the detritus of pop culture. 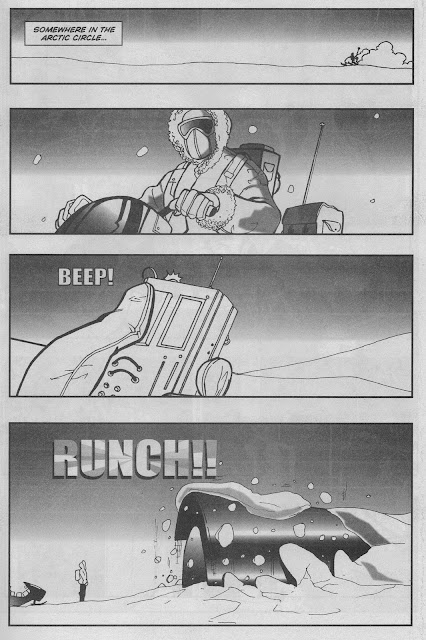 “RUNCH!!” may be my new favorite comic book sound effect.

So here we go. My biggest complaint about Nanoman #1 is its derivative nature. This comic’s narrative is full of tired clichés. It got to the point where I started to count. Won’t you count along with me?

Tired Cliché #2: Once inside the Hidden Arctic Base, a character reveals his or her face in a close-up shot. 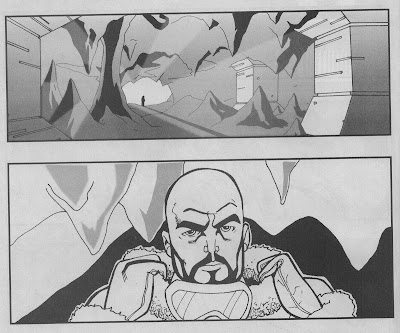 This mysterious individual wanders through the base which is full of individuals shrouded in hooded robes festooned with strange, glowing markings on them. The base has a religious cult sort of feel to it. Finally, the guy meets “the boss”. 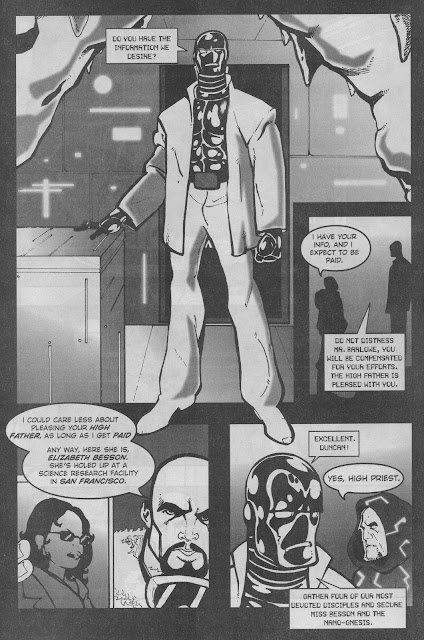 Here we have the “High Priest” who reports to the “High Father”. With everyone so “High”, you would think there would be more snacks around.

Mr. Barlowe has come all way to the Arctic Circle to tell the “High Priest” about a woman, Elizabeth Besson, who is “holed up at science research facility in San Francisco.” Why he had to come all that way to deliver this information is a bit confusing, but then I remembered that in the year 2000 we had yet to embrace the more recent technology of the internet and telephones.

The comic then cuts to the aforementioned Elizabeth Besson who is working at the “Steven Hawkins Science Research Center” in San Francisco. 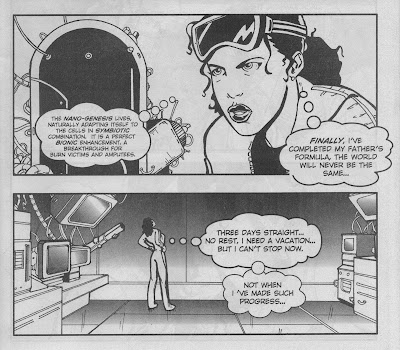 Tired Cliché #3: The child of a scientist works overtime to perfect the research of their parent. Check!

What has Elizabeth Besson done? She has unlocked the secret of the “Nano-Genesis,” which adapts itself to “the cells in symbiotic combination.” She envisions it to be a “breakthrough for burn victims and amputees.”

Tired Cliché #4: A scientist develops an obvious bio weapon while deluding him or herself with stary eyed dreams of helping only a small portion of the overall population. Check!

As Elizabeth Besson ruminates on her success and her exhaustion, she is distracted by a photo on her desk. The photo is of Jack Samson, her boyfriend.

Tired Cliché #5: A beautiful, intelligent, successful woman is in love with a man who is washed up or has been broken in some manner. Check! 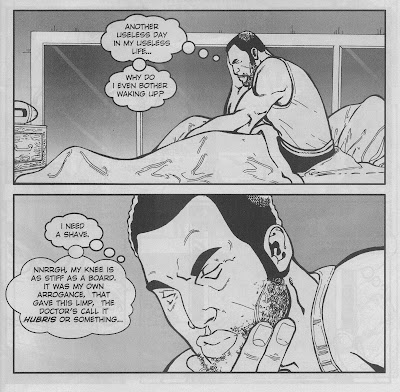 Points given for the use of the word “hubris,” though.

Samson was a former football player, an “MVP three years in a row, almost broke four records,” who suffered a knee injury and has been adrift ever since. He can’t understand why a woman like Elizabeth Besson would “want a burnt out loser” like him.

We cut back to the “Steven Hawkins Science Research Center” in San Francisco where four goons in black suits arrive just in time to manifest Tired Cliché #7. Check! 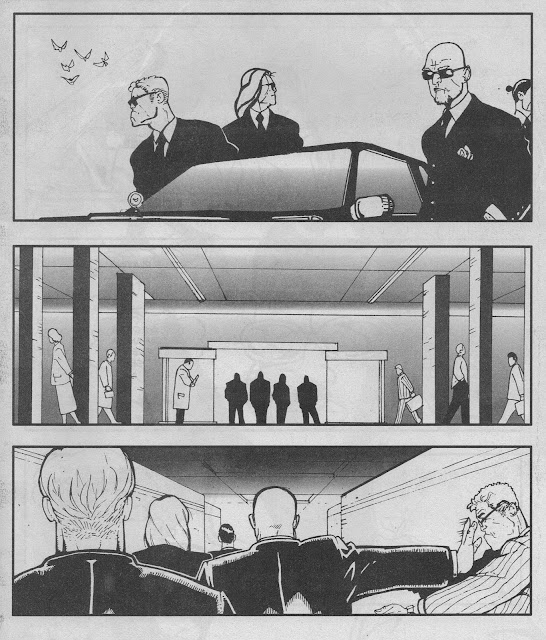 The next scene is Samson driving. He’s thinking about Besson and is making plans to buy her “a bottle of Dom and a dozen Fire and Ice Roses,” then take her to see Sade at “the Radisson.” This sounds like the perfect Tired Cliché #8 kind of date.

By this time the goons in suits have strong armed their way into the company of Elizabeth Besson, who, with Tired Cliché #9 bravado, confronts them with sassy attitude. Check!

The goons grab her, tell her they know about her research, and demand that she give them the “Matrix Formula for the Nano-Genesis.” As things heat up, who arrives but Samson, flowers in hand, with Tired Cliché #10 precision. 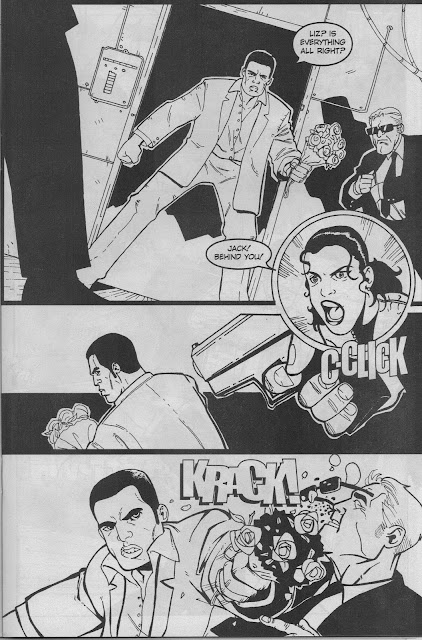 I do have an urge to make some sort of “deflowered” joke at this point, but I shall refrain for now.

Anyway, the goons start shooting at Sampson and, with battle-hewn reflexes, Samson pulls out Tired Cliché #11 and uses the body of the dude he just rosed as a shield.

But that can’t last for long, can it?

What to do, Samson? What to do? How do you get yourself out of this pickle? 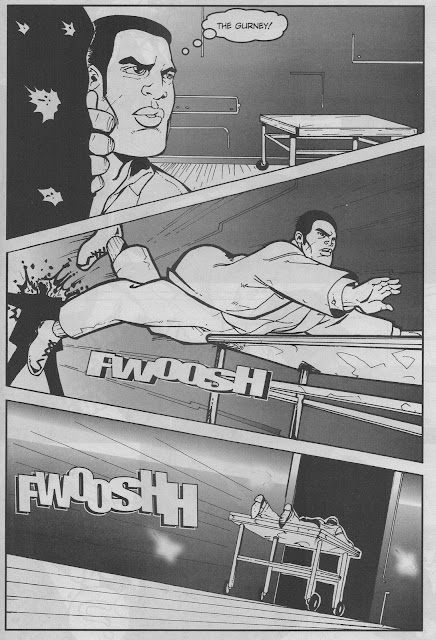 Of course, there’s the gurney. And as Samson rides the gurney out of the room the judges give him a score of 9.5 for his Tired Cliché #12 execution (it would have been higher if it weren’t for the judge from North Korea).

Tired Cliché #13 has one of the goons following Samson into a dark room, only to come flying out unconscious a moment later.

Samson is now armed and shoots a third goon through the chest. This leaves the lead goon holding on to Elizabeth Besson.

Then there is this: 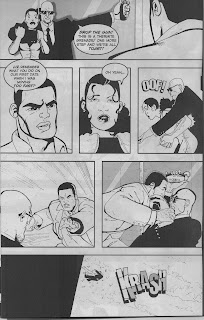 Let’s see -- ex-football player being sexually aggressive and the beautiful, intelligent, successful woman having to resort to physical violence to stop him as a precursor to romance? I really am loathe to admit this, but this is Tired Cliché #14. Ah, what a world. I just love it when kids fall in love after a thwarted date-rape

Oh, and smashing a bad guy through a window to save the girl? Good old Tired Cliché #15. Check!

Of course, during the descent to the pavement, the goon sets off the Thermite Grenade and we get one of the best pieces of art in the entire comic. 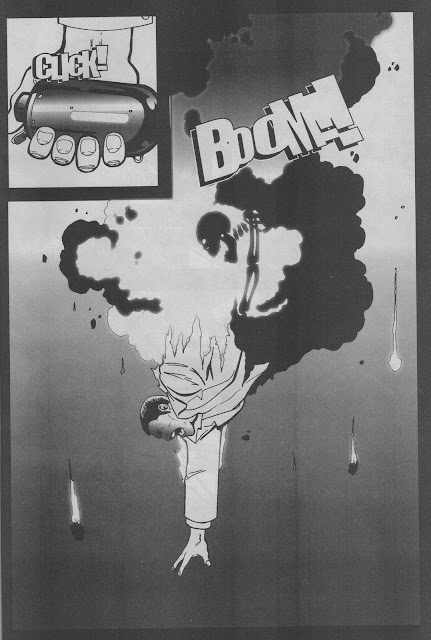 I do think this scene would have been a better place for the “RUNCH!!” sound effect, though.

They land in a conveniently positioned pool -- Tired Cliché #16 -- and when we next see Samson, he is awaking to a new set of problems. 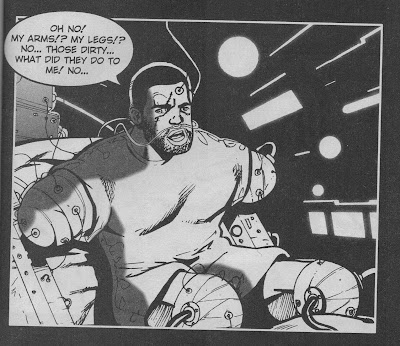 Samson passes out from shock or the medication or a plot contrivance or Tired Cliché #17, and when he wakes back up we get this: 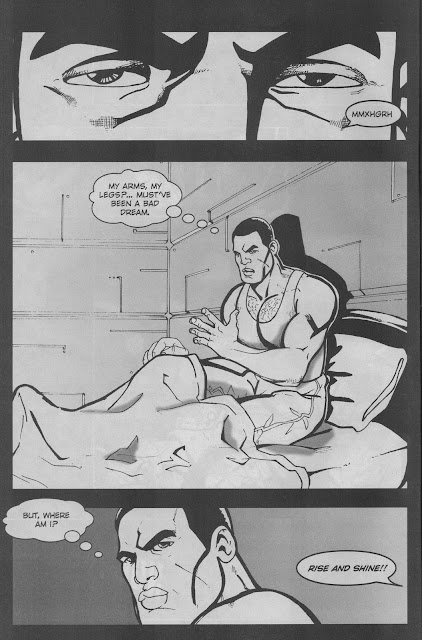 Ahhhh…. was it a bad dream, a perfect opportunity to pull out Tired Cliché #18?

Just then, a mysterious stranger shows up and we get this scene: 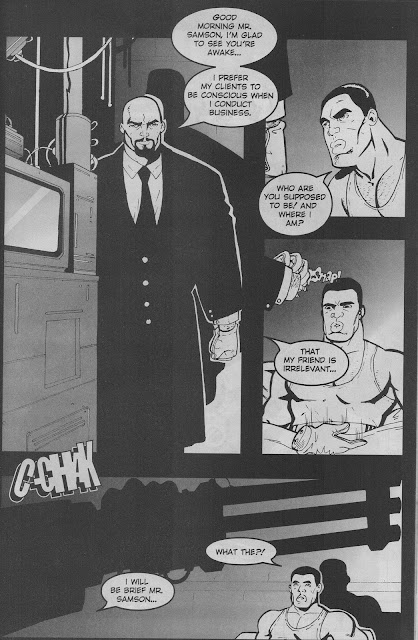 The dude pops his hand off and lets it fall on the bed? How sweet was that?

I read that scene three times and the “SNAP!” sound effect combined with the look on Samson’s face made me giggle EACH TIME. This moment – and only this moment I might add – may have made this comic worth the 50 cents I spent on it.

Of course the hand popping off was only an opportunity for the creators of this comic to give us their piece de resistance, Tired Cliché #19: The Man with the Gun for a Hand. Check! 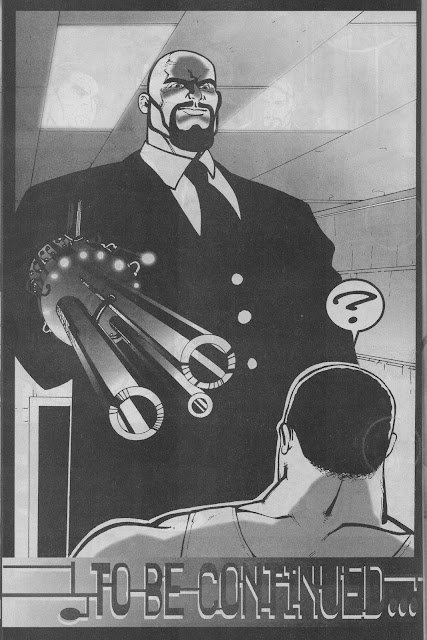 And that’s how Nanoman #1 ends, with a Tired Cliché #20 cliff-hanger. Check!

In a way, reading this comic was sort of a stroll through our collective unconscious. It’s almost a Jungian enterprise in pop-culture archetypes. Twenty Tired Clichés in twenty-four pages is a pretty nifty trick, if you think about it. As a High School English Teacher, I briefly flirted with the idea of using Nanoman #1 in my class as a teaching tool in order to demonstrate the power of collective representations as a narrative device.

Then I realized that Nanoman #1 was just the product of some probably very nice gentlemen with, I’m sure, the best of intentions, who really didn’t have any original ideas and spewed up a story pretty much any culturally aware bent-nosed yahoo could muster.

Which itself could be a Tired Cliché.

In ending this week’s column I think it appropriate to quote an old editor of mine who, upon reading a different sub-par small press comic than Nanoman #1, said, “Just because you CAN make a comic book, doesn’t necessarily mean you SHOULD.”

And that’s no cliché.