Sometimes the most universal truths can be found in the smallest slices of life.  That’s what makes independent documentaries so powerful, engaging, and entertaining. Not only do they show you little worlds to which you’ve never had access, but they oftentimes also tell the larger story of what it means to be human. Armed with this intellectual conceit, a bag of Funyuns, and a couple of Miller beers, I curl up in front of the TV and delve deep into the bowels of Netflix Documentaries to find out a little bit more about all of us.
Today I found 2004’s A State of Mind directed by Daniel Gorden 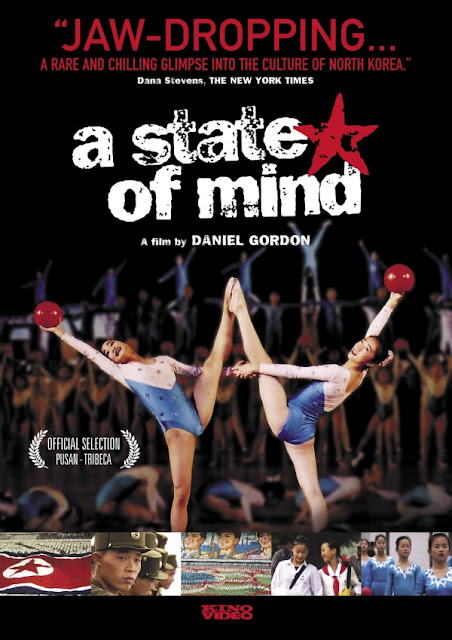 A State of Mind follows two North Korean girls, Pak Hyon Sun (13 years old) and Kim Song Yun (11 years old) as they prepare for the 2003 Mass Games, while it also gives us a small insight into their daily lives. 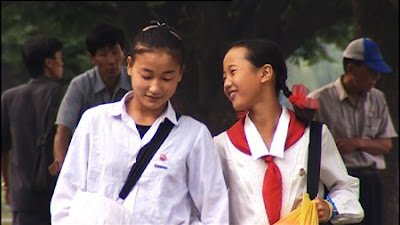 The Mass Games are an incredible spectacle. Imagine the excesses of your typical Super Bowl half time show, tone down the sex, add a heaping cup of politics and nationalism (well, more focused nationalism), remove all commercialism, then inject it with eight million tons of steroids, and you will get a slight approximation of the grandeur of the Mass Games.

80,000 gymnasts, who have reportedly put in over two million collective man hours of practice, take to the field during the Mass Games and put on a carefully choreographed and intensely synchronized performance. N Rain Noe from Theme Magazine describes the event by writing, “Their bodies move to form fiendishly complicated patterns ranging from blooming flowers to intersecting geometric shapes that expand, collapse, and flow into each other, and every last gymnast moves in perfect time with the group. There are no missed steps, no awkward lags, no slow individuals who are off by a beat, no unseemly breaks to distract your eye from the patterns of perfection. The coordination is astonishing.” The whole spectacle is unbelievable. 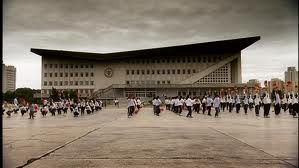 As a film, the documentary itself is pretty straight forward. We meet the two girls and their families and get to watch the girls go through their grueling training. Interwoven through the various scenes, though, is the political backdrop of The Democratic People’s Republic of Korea (DPRK), better known as North Korea.

During the filming of this documentary, Dubya, our president at the time, had included North Korea as part of the “axis of evil.” A totalitarian governmental system that demands unfailing allegiance to “The General” Kim Jong-Il and the deification of “The Great Leader,” his father Kim Il-Sung, North Korea is one of the least known or understood country in the world. The seemingly unfettered access that director Daniel Gordon and his crew obtained in the filming of A State of Mind is nigh-on unprecedented.

Gordon freely admits that he worked in cooperation with the North Korean State Film Company in the making of this film. It was the Company that found the two young gymnasts upon whom the movie revolves. This would tend to make one think that these girls were handpicked because of their devotion to “The General.”

They are devoted, hard core born again fundamentalist Christians talking about Jesus kind of devoted. But they are also girls, and they complain and they giggle and they shuck their responsibilities during the course of the film. While their unblinking fanaticism regarding Kim Jong-Il is ever present (and mildly unsettling), you can still relate to them, their foibles, and their enthusiasm.

The families talk to the film maker about how difficult life has been lately due to a lack of food and the ever present power outages. One of the mothers even talks candidly about “The Arduous March” which was a time of unprecedented famine in the country. 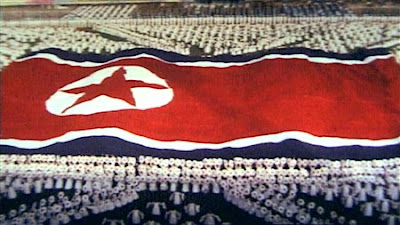 All of this insight into the daily lives of North Koreans is fascinating and worthy of a documentary all its own. What truly distinguishes A State of Mind, though, is the footage of the Mass Games themselves. With hive-mind intensity and complete sublimation of the individual, the Mass Games are an incredible example of human achievement. This is not a competition in any normal sense; rather, it is a celebration of the underlying sensibilities of the North Koreans and their political structure.

On a personal note, there are times where I find a totalitarian force controlling our lives and decision making a little appealing. So much of free will can be overwhelming. Our petty struggles to distinguish ourselves from the pack, our constant fascination with celebrity, our schadenfreude, our consumer culture, they all often wear me down to the quick as I consider what the future will bring for my young son. With the absence of free will, though, so many of these burdens are alleviated.

How is faith in The Great Leader or The General any different than faith in Jesus or Mohammad or Yahweh?

Anyway, A State of Mind presents a fascinating look at North Korea, celebrates the spectacle of the Mass Games, and is really an enjoyable film.

Check it out, no matter what your politics.

Clips from the film spliced together with really crappy music (turn off your volume before watching):