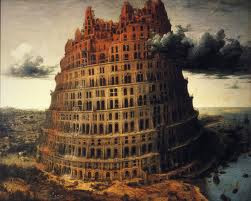 Steven was busy dismantling the tower when Elizabeth dropped over. The tower had been an opportunity of one-upmanship over Steven’s neighbor, Jake, but the cops had swarmed in with a fistful of zoning laws and building codes and had put an end to the whole project.

“What ya doing?” asked Elizabeth.

“Avoiding prison,” Steven replied, using a crowbar on another two by four.

“Oh, I see….” Elizabeth stood by the ladder and kicked at the strewn lumber and bolts.

Elizabeth smiled and shook her head, “Not really my forte, too much wood and sharp things involved.”

Steven pulled harder on his crowbar and muttered, “Yea, you never were much of one for sharp things….”

Steven continued to work without answering and, after a few moments, Elizabeth stepped back and sat down on the grass.


Glancing up from the ground and squinting into the sun at the tower’s now naked skeleton, Elizabeth said, really to no one in particular, “Would have been a beauty of a tower….”

“Too bad about all this…”

A few more moments passed in which Steven continued to take apart the tower, and Elizabeth alternated between staring up at him and playing with the grass. Finally, she asked, “What are you gunna do when you finish this?”

Throwing down some more lumber, Steven looked down at her and asked, “Once I finish taking this bastard apart?”

“I dunno.” He paused and used his crowbar on another two by four. “I guess I was thinking about traveling.”

“Really?” Elizabeth asked a little to quickly for her own sense of decorum. As she blushed and looked back down at the grass she asked, “Where would you go?”

Elizabeth smiled at this, but, as she thought about it, slowly pulled the grin from her face. “Would you be leaving soon?”

“Maybe. Soon as I finish this, maybe.”

“Oh…” Elizabeth pulled at some of the grass and absent mindedly examined the blades. “I’ll miss you…” she sort of half mumbled.

“Nothing, really…” Elizabeth pulled at the grass some more, and Steven began working his crowbar again.

A low hum began somewhere in the distance. Barely audible at first, its pitch rose until it became almost deafening. A huge shadow slowly fell over Steven, Elizabeth, and what was left of the tower.

“What the heck is that?” Elizabeth screamed, scrambling to her feet and pointing at the enormous silver disk hovering in the sky, blacking out the sun.

Then there was a bright light and unbelievable heat.