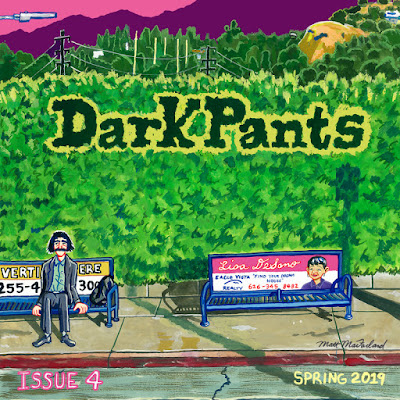 The routine of normalcy that arises after building a life based on society’s expectations undulates with a monotonous beat. In the quest for stability, often times people lay waste to their drive for excitement, the rush of the unique, the palpitations of exhilaration. Predictability becomes engorged with routine, the hard edges become soft, losing their bite. It’s usually in the midst of the bland realization of success that people make wildly inappropriate decisions and blow up their careers, their families, their lives. The aftermath is shame and the understanding of that which is lost.

This is the endemic malaise cycle of the privileged and the subsequent breeding ground for the blown-out ego-driven spirituality that leads to events like the Fyre Festival and Burning Man or the profusion of sound healers, crystal shops, and yoga studios in gentrified neighborhoods or, say, precious Gold Rush era small towns in Northern California -- it’s also the playground of the Namaste saying, tribal tattooed, top knot bun sporting yoga boy.

You may have seen them around. They are often dramatically sipping herbal teas while telling you that, “Actually, the swastika is an ancient Vedic symbol meaning ‘Good Existence’.” They burn as many calories through their “practice” as they do through cultural appropriation, casual racism, following their “passion”, and shaking their heads at the excess of capitalism. They’re better than you because they understand how the world works without ever really needing to work in the world. They’re as smug as they are fragile; self-aggrandizing bullies who prey on the ignorance and boredom of other discontent people of privilege. 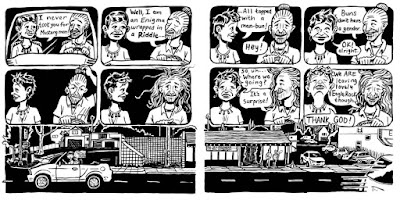 In Matt MacFarland’s DARK PANTS #4, the top knot bun sporting yoga boy is the central focus of the main character’s malaise cycle. Lisa is a successful real estate agent in Eagle Rock, CA who has a beautiful house, a devoted husband, and a couple of rambunctious children. But Lisa’s success leaves her empty -- the life she has built was not the one she had expected when she was younger. All that hard work came at the expense of excitement, the “more” of being a singer, a writer, something other than what she has dedicated so much of herself into creating.

This leads to tensions at home and dissatisfaction at work. It’s led to a quest to fill the void. It’s led to yoga classes. It’s led to Cal, the top knot bun sporting yoga boy who talks about things being “blessed” and asks her about her “passion”. It’s when Lisa puts on the titular Dark Pants in this book that she makes the predictable poor choices -- lying to her husband, belting out karaoke “Born to Run”, being sexually disappointed by Cal (of course), and suffering all the consequences thereof. 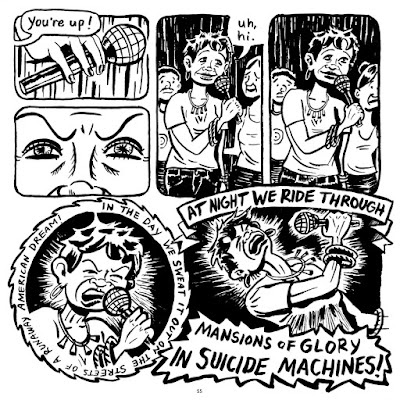 Still, MacFarland hints at the end of Dark Pants #4 that all this may have been for the best. By donning the dark pants and wiping out the vestiges of all the disappointments her successful life was built upon, Lisa is free to travel the highway and begin again. Maybe the disappointment of the top knot bun sporting yoga boy helps her get out of the “death trap” and get out while she’s young?

We don’t get answers. We get the ego-driven whine of the spurned top knot bun sporting yoga boy, dark pants in the trashcan, and a Southern California highway lined with wind turbines spinning in the breeze. 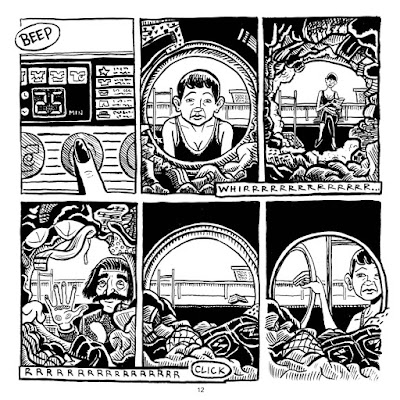 In 80 pages of MacFarland’s thick ink lines creating emotive faces, stilted intensity, and the dream-like quality of self-deprecation, Dark Pants #4 plays out not quite as you expect it to, but holds firmly to a sad believability, a condemnation of privilege, and a small celebration of excitement, no matter the cost.