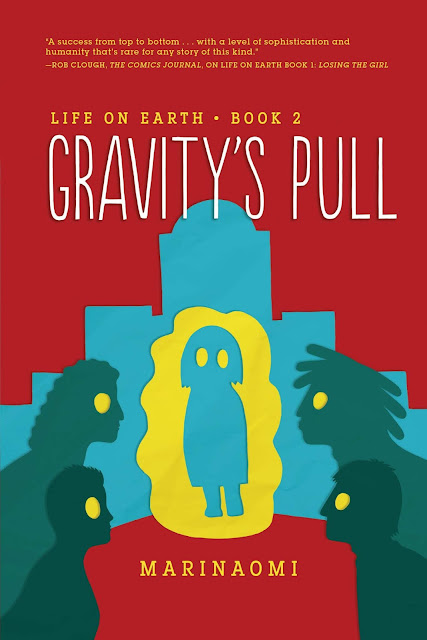 MariNaomi is best known for her confessional and revealing autobiographical comics that center around relationships, friendships, and personal identity. In her young adult, fictional series Life On Earth, she uses those themes to tell the stories of four teens in a small town. There's also a fifth teen who is the catalyst of the series; her disappearance in the first book was its central plot point and her return in the second book drives its narrative. MariNaomi strongly hints that her vanishing may have had something to do with aliens, but she does make it clear that something weird is going on, even if it's mostly in the background. The real story in the first two volumes is the way these teens interact with each other, and how they find themselves alternately attracted and repelled at various points.

In both books, we are first introduced to Nigel, an African-American guy who's a skater with a minimalist aesthetic. He has a crush on Emily in the first book (Losing The Girl) and develops one on the mysterious returning girl, Claudia. His arc in the first volume saw him maturing and learning how to be a friend instead of just a player, even as he was dealing with the pain of his parents separating and essentially leaving him to fend for himself. Emily was involved with Brett, a jock who was also a sensitive artist, but things went south with their relationship after she got pregnant and had an abortion. Emily's best friend was Paula, but Paula felt like she was constantly being taken advantage of by her. It didn't help that Paula had her own crush on Brett. Brett mostly refused to share his feelings as he was dealing with a mentally ill mother who was on her deathbed.

That's a lot of emotional and personal narrative to lay down, especially in a visual, talking-heads format. To do this, MariNaomi had to solve two problems: how to make these characters feel like something beyond tropes and how to present this information in a visually compelling manner. Her solution was to double down on the idea that everyone sees the world from their own distinct point of view. Thus, each chapter is not only focused on a specific character's narrative, and each chapter is done in a different visual style unique to that character. That aesthetic approach extends to lettering, line weights, shading, page format, and a variety of other choices that help each character stand out. This style is a clever metaphor for the way we think of others as part of our story, shaping them to fit into how we see the world. 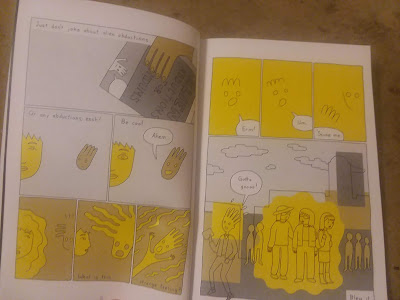 In Gravity's Pull, MariNaomi continues to use this metaphor, with the new presence of Claudia affecting everyone else in visually arresting ways. Nigel kicks the book off once again, and the art continues to reflect his point of view. The art is minimalist, given some weight by the extensive use of shading. Nigel's own self-caricature often drops down to something as simple as dot eyes and a line mouth, with his dreadlocks drawn as bulbous protuberances. Visually, things change when he first spies Claudia: he's drawn to her for reasons he can't understand, and when he sees her, she's surrounded by a yellow glow in her eyes. It's a sudden use of spot color that instantly conveys his attraction and the way her weirdness makes him feel weird; it's fitting that the yellow is deliberately made to look eerie and alien. It also indicates something else for each of the characters: a surprising level of empathy and wisdom for the problems of others. Nigel ends the chapter comforting Paula's asshole ex-boyfriend, even as it's clear that he's surprised that he's doing it. He glows yellow when he's dispensing advice and his figure is even more cartoonish than in the rest of the chapter, which once again cleverly indicates what's happening without spelling it out.

Paula is drawn using open-page layouts, one image blending into the next as she drifts and dreams her way through her day. MariNaomi makes frequent use of extreme close-ups as visual metanyms, like a shot of Paula's lips representing her entire person as she shouts out the name of her crush. Throughout the course of this chapter, as Paula kisses her crush Johanna for the first time, MariNaomi keeps a lot of tight close-ups on the talking heads, stripping away all but the most essential elements of the feelings being expressed: eyes, mouth, nose. When she pulls back a bit, she's also pulling back emotionally for a second, as Paula (and the reader) take a moment to reflect. The thin quality of the line is representative of Paula's fragility. She can't let her crush on Brett go, and when she tells him she's with Johanna now (not knowing about Brett's own obsession with Johanna), Brett gets angry and tells her to leave. The final self-image of Paula is warped and ugly as she thinks “I am unlovable”. 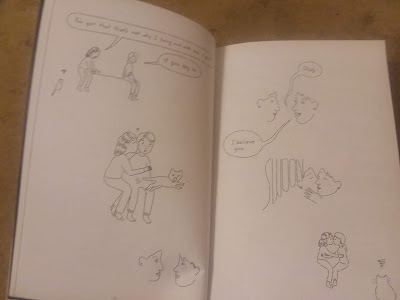 Brett is the focus of the next chapter, and it's all dramatic grayscale shading, as his emotions simmer in a miasma of gloom. As little as he shares with others, his own internal monologue is morose and despondent. The scenes with his dying mother are heartbreaking, and MariNaomi draws Brett's mother as he sees her in the last scene: an almost mummified corpse.

Emily in many respects was the central character of the first book, and her narrative once again takes up a lot of space in Gravity's Pull. The visual approach here is the most conventional: standard grids, crisp black and white, bold line weights, and a mix of naturalist drawing (especially in close-ups) and more minimalist drawings. The story picks up with her at a party, bitching about Paula, and making out with a guy. When she doesn't want to have sex, he turns his attention to another friend, and Emily later finds her being raped by him. It's done subtly and without exploitative images; instead, the focus is on Emily's rage. Emily calls Brett and Nigel to help her drunk friend get out of there. The images here are stark and hard, but Claudia's influence is suddenly felt at the end of the chapter when Emily starts to boldly comfort Brett. Her figure is filled up with a warm red, and as she kindly tells him that there are people who want to help him, the glow surrounds them and their figures suddenly look like iconographic, blue alien figures with big red eyes. In the final panel of the chapter, we can see Claudia and her two mysterious companions looking at the house Emily's in. 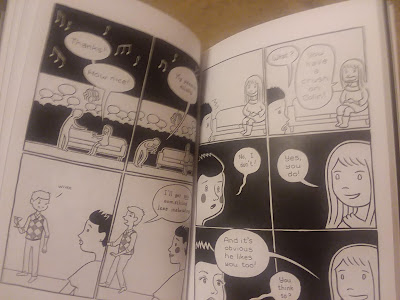 In Claudia's chapter, nothing is really explained about her but much is revealed. She sees the world as a series of colored pencil drawings on graph paper: a beautiful, pixelated world where she can see the thoughts and emotions of others as clearly as anything else. When Emily comes over to talk to her on Nigel's behalf, Claudia effortlessly probes her mind and gets at her deepest flaws, an experience that momentarily puts Emily in a mild trance. The end result is Emily getting Claudia's phone number for Nigel so that she can tutor him. It's a nice cliffhanger that sets up the third and final volume of the series.

On the surface, MariNaomi makes sure to include a number of topics that its YA audience can relate to: the fragile quality of friendships, the confusing nature of relationships, abortion, sexual assault, parties, family strife and the beautiful ache of love. She approaches each topic in a humane and kind manner, never reducing her characters to stereotypes or placeholders for narrative scaffolding. 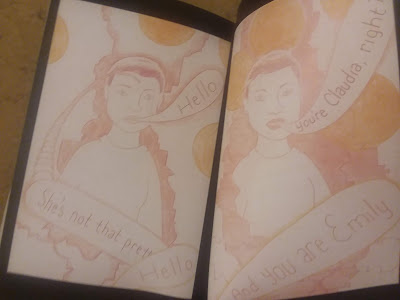 However, this book isn't a checklist of teens and their problems. Instead, its theme is that the essence of being human is creating connections with others. Isolation leads to depression, acting out against others, and an inability to express one's real needs. In Gravity's Pull, Claudia seems to be acting as a catalyst to make certain characters brave enough to let down their guard and act compassionately toward others. She is the impetus that helps bonds start to coalesce, easing through pain and vulnerability. The most masterfully executed aspect of the book is that MariNaomi is able to get across these themes purely through her use of visuals, from line to format to color. Her creative visual language changes shape and tone whenever needed in support of the dialogue and narrative. The warmth and love MariNaomi shows for each of her characters are palpable, as she allows them to be flawed while never judging them for being human. That warmth is extended in turn to the reader, who is reminded through her use of metaphorical imagery of the importance of human connection and empathy.