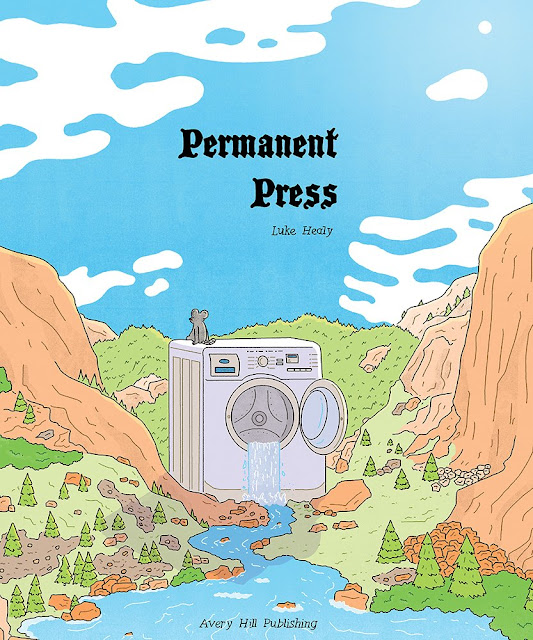 Our society does not appreciate the arts. Humanities departments in universities across the U.S. are struggling to maintain student numbers. Admirers of STEM subjects talk down to those outside the industry. Parents tell their artistic children to pick practical careers. Become a doctor, a lawyer… an accountant.

Luke Healy’s Permanent Press is one man’s inevitable implosion in the face of an apparently stagnating artistic career. The comic features a frame narrative, providing context for two other comics that both focus on artists struggling with their work. The storyline is paced according to the original narrative, which contains two sides of Healy’s conscience. One side, evoking his neuroticism, depression, and artistic abilities, is represented by a cartoon version of the artist that slowly morphs into a rat. The second takes the form of the fictional Healy’s shadow, which represents his exasperation with himself. Filled with self-deprecating humor, the frame has a straightforward, simple aesthetic style that highlights the absurdity of its parts. Healy seemingly cannot help but mock himself and his high self-consciousness, which is possibly the only valid reaction left in the face of the inability to control one’s fate. 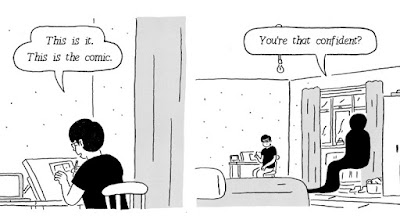 The comics within his comic, however, are not primarily emboldened by humor. In fact, the first mini-comic, “The Unofficial Cuckoo’s Nest Study Companion,” is by far the high point of Permanent Press. It’s a puzzle of contemplative elements and unlikely occurrences which satirizes plot as well as critiques how art is formally recognized. Like with Healy’s career, the creators in “The Unofficial Cuckoo’s Nest Study Companion,” find their work unappreciated.

Robin, the main character, is a playwright, who is asked to adapt a little known, award-winning novel called “Cuckoo’s Nest” for a BBC stage play. After a failed adaptation of Macbeth, she fears another disaster. Secondary characters include A.B. Cadbury, who is the writer of said novel, and Wally Milk, the “Cuckoo’s Nest” play’s set designer. Cadbury, it turns out, is a teacher who finds himself teaching his own novel to a very bored and very “not-getting-it” high school class (the story of “Cuckoo’s Nest” is included with thoroughness, making Permanent Press, at one point, a narrative within a narrative within a narrative). Wally, although he builds a brilliant set for the play, finds himself fired by Robin due to his slowness. 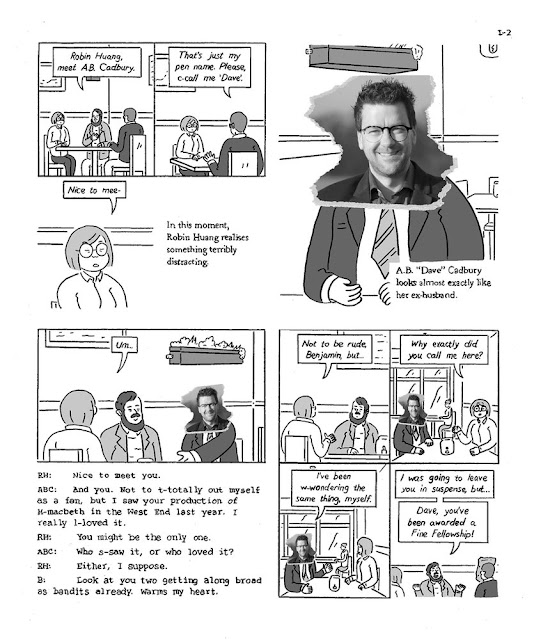 “The Unofficial Cuckoo’s Nest Study Companion” is a highly psychological work. What motivates and irritates each character is always clear to the reader even if it isn’t always apparent to the characters themselves. Healy does this in many incredibly skilled and subtle methods, all based on his ability to seamlessly meld seemingly disparate elements and media into one story. Photorealistic elements are inserted in the middle of pen-drawn illustrations, creating a striking contrast between what’s happening to his characters both on the surface and underneath. He often intersperses his work with scripting format, which carries longer conversations between the characters, leaving only the most pointed parts of these conversations within panels. And, of course, he still punctuates the comic with humor, which normalizes the absurd parts of the story. 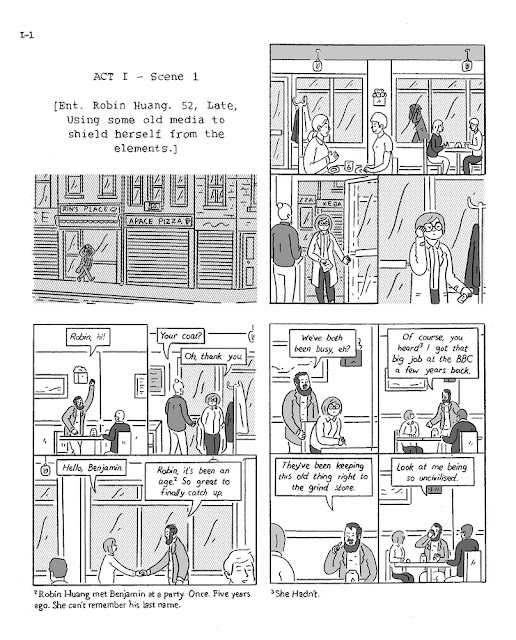 Ironically, after Robin finds herself struggling to adapt the ending of “Cuckoo’s Nest,” the weakest part of “The Unofficial Cuckoo’s Nest Study Companion” is its own ending. It lands on a trite note, forgivable only by the endearment of its characters, all of whose arcs find smooth pacing and resolve satisfactorily. Of course, one could call this ending purposeful. After all, Robin finds the acclaim and apathy to the acclaim that Healy desires throughout Permanent Press.

“The Big and Small,” the second mini comic in Permanent Press, unfortunately doesn’t hit the same notes in terms of stylistic choices nor pathos. Inspired by Healy’s father, who apparently often pressures Healy into becoming an accountant and believes that numbers are “reasonable… [and] have nothing to do with us and our bullshit,” “The Big and Small” is directed by numbers and how they relate to its two characters. Ultimately, although small details about Amir and Mo rapidly paint a strong picture of each of them, the numbers never truly connect to the rest of the story. They’re not thematic nor do they ever step outside the narration. Without the context of Healy’s frame storyline, one reading the comics would wonder why they were there at all. The only thing they represent are their creator’s deep frustration with his unsupportive father’s viewpoint. 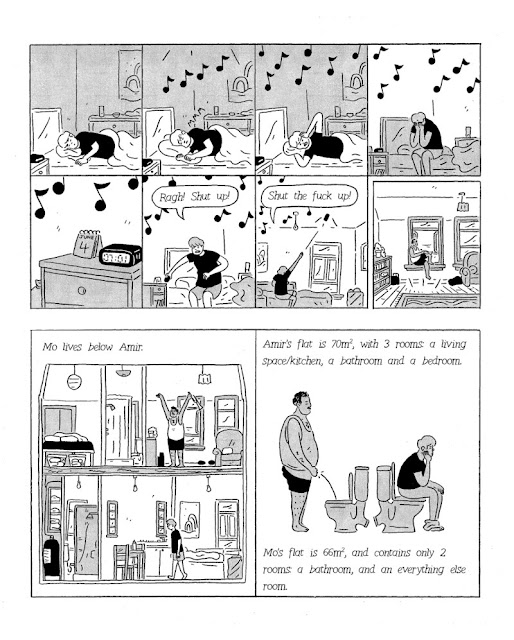 This is reflected in Amir, who plays trumpet in an orchestra. Neither the conductor nor Mo, his neighbor, appreciate his playing. He doesn’t seem to either, to be fair—he would much rather be making fetish videos where he eats tiny breakfast foods, which also nobody appreciates. Healy doesn’t delve any further into this, as he repeatedly interrupts with his conscience characters in the frame narrative, then abruptly ends the comic in the middle of the story. The end of the page literally tapers away as if to reflect the tapering of his fictionalized version’s mind as he falls further into a mental breakdown, represented by him transforming into a rat.

“The Big and Small” has neither “The Unofficial Cuckoo’s Nest Study Companion”’s formal ambition nor its humor, presumably because the fictionalized version of Healy is too emotionally exhausted at this point to attempt either. By the time Permanent Press ends, he’s in full rat form and sitting on the cliche psychiatrist’s couch, talking to his shadow. And it’s understandable how he got there—his main channel of communication, his art, is devalued by his parents, by his lack of awards from the comics community, and, ultimately, by himself. 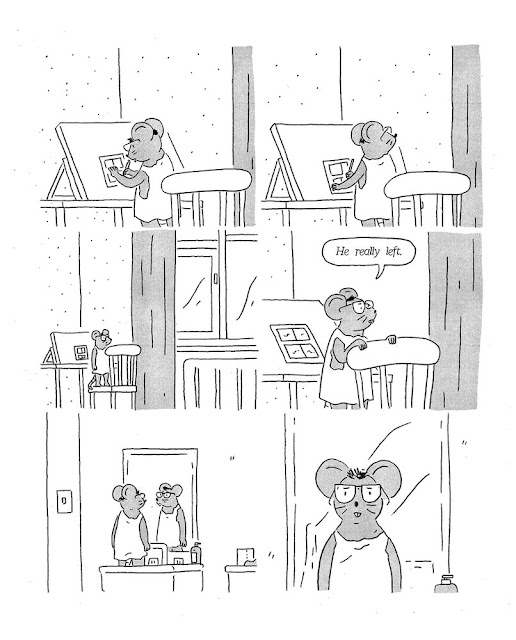 It would be nice to say that Permanent Press offers a “fuck you” to society and all of its dismissiveness toward arts and the humanities. But truthfully, it’s more of a message to other artists. Whereas it would be nice to have Robin’s apathy to her ultimate success or Amir’s persistent interest in making online videos, we’re all affected by external praise or criticism, or, worse, complete silence. Permanent Press is an experiment in vulnerability. It’s an artist’s book, an aid in laughing at one’s own self-doubt.