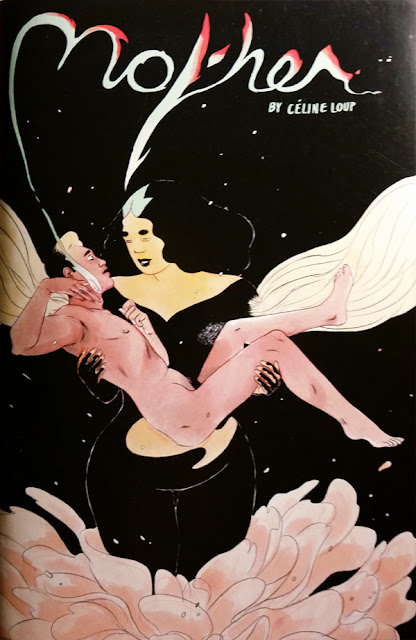 Mother is the first volume of a comic by the award-winning illustrator and cartoonist, Celine Loup. It features the unnamed inhabitants of a gorgeous fantasy world that does not lend itself to an easy description, a place that is at turns plentiful, wondrous, and dangerous. Rather than providing her readers with explicit explanations, Loup allows the fantastic logic of this world to unfold organically. This immersive approach allows the world’s more unusual facets, including Loup’s refreshing approach to gender representation and gender relations, to surprise the reader throughout the story.

The comic itself is rendered with a gestural lushness that Loup evokes effectively in black and white through her use light, texture, and tone. Even though you may not understand the history and workings of Mother's world, you are subsumed within its sensual beauty.


Like many of the comics I enjoy reading, Mother rewards an attentive reader. It is not a comic to be read by racing ahead, consuming plot. With Mother, you can enjoy the sensuality of place.

Mother’s world is reminiscent of earth, but it is also radically different. It is populated by giant birds and strange hybrid human-animals. Its people possess supernatural powers: they can float and soar, they walk on clouds, light emanates from their fingertips or foreheads. However, it is Mother's representations of gender that are perhaps the most striking and original aspect of the comic.

We are introduced to Mother's male protagonist as someone concerned with beautifying his physical appearance with flowers but who shortly demonstrates his strength and aggression in a wrestling match. He is a refreshing character, unrestricted by gender roles. He expresses self-doubt, creativity, aggression, tears, tenderness. Gender relations are both familiar and unfamiliar. The female protagonist also displays a wide breadth of characteristics despite the brevity of the comic. She is at points sorrowful, nurturing, brave, demanding, vulnerable...

But before I leave you with the erroneous impression that Mother is just an imaginative and pretty story with a good sex scene, I should mention that plot is an integral part of the comic. Loup’s characters hint at past conflicts and betrayals although the exact history of why certain relationships have become strained are never revealed. That Mother’s first volume only hints at a rich backstory that includes a radical vision of gender relations makes it all more unfortunate that Loup does not plan to continue the series. There is so much potential condensed into these few pages. Even if we accept the fantastical elements of the world, the first volume concludes with many unanswered questions. What happened in the past that has turned some inhabitants against each other? Why is one female character so much physically larger than the others? Are there others like her and why do the men wait for her? Although such questions may remain unanswered, I still think it’s worth picking up a copy of Mother because of its unique story and Loup's illustrative skills.

Mother is available for purchase on Loup’s Etsy webstore; I bought my copy at The Beguiling. 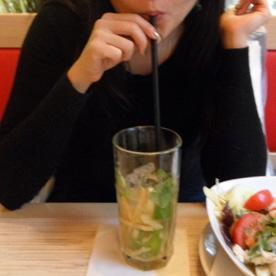