(Editor's Note: Ryan C. runs his own review site called Four Color Apocalypse which is full of his excellent writing. When Ryan asked if he could write about Charles Forsman's Slasher, I (being a Forsman fan), of course, said, "Please Do." Ryan's look at how Slasher fits into the Forsman oeuvre is insightful and absolutely worthy of your consideration.) 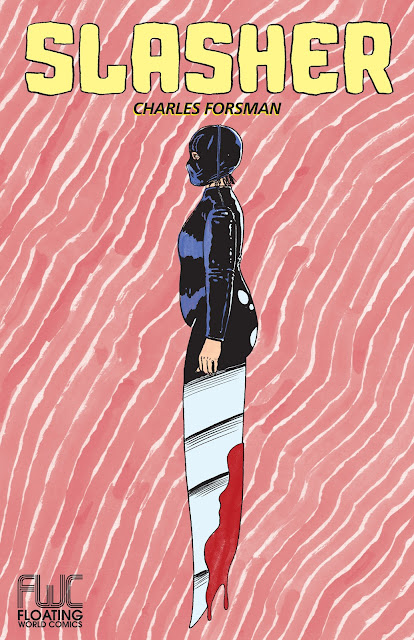 I'll say this much for Chuck Forsman's just-released Slasher trade paperback collection (Floating World Comics, originally serialized over five issues) --- it leaves you with plenty to think about.

That's a good thing. As is Forsman's crisp, stark, cinematic cartooning and moody, inventive use of color. The book's visuals make the unnerving, the disturbing, both deeply and immediately human, offering no "safe distance" between reader and subject, utilizing a decidedly grindhouse aesthetic sensibility to deliver the goods by turning the world upside-down on page one (which explicitly portrays human beings as meat), then drawing back to something vaguely resembling "normalcy," and then absolutely going for the throat --- yes, literally. The ingredients for a memorable, even a classic, read? They're all here. 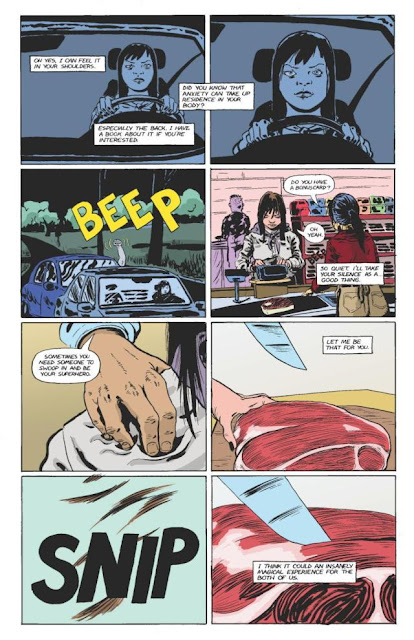 There's an inescapable sense that we've seen this all before, that Slasher is staking out something of a "middle ground" between Forsman's trademark "all is lost" portraits of alienated youth (The End Of The Fucking World, I Am Not Okay With This) and his genre-themed work (the two Revenger series). Certainly, in Slasher, he captures the flat and affect-less character of suburban American life that his protagonist, a data-entry clerk in her mid-20s named Christine, both internalizes and mirrors, with keen accuracy and clinical dispassion, but that's taken as a given with Forsman at this point. We know he does this sort of thing and does it well, and ditto for the specific details, which are likewise right up his alley --- Christine is sleepwalking through life, her sexual bloodlust providing the only points of exclamation in an otherwise wholly unremarkable existence; the internet, as you'd expect, has to date been the only "release valve" for her admittedly deviant fetish, and that's where she vicariously "meets" Joshua, a 14-year-old handicapped kid from nowhere, suffering through an openly vicious co-dependent relationship with his domineering, religious fanatic mother. Yeah, he's jailbait, but he "gets" her. Even prods her forward. Goads/coaxes her into taking things to the next level, into making her fantasies an actuality. In due course, she outfits herself with a "gimp"-esque leather mask/bodysuit combo and buys the knife of her dreams. Oh yeah --- shit's gonna get real.

Her first "taste" of bloodletting (okay, bloodtaking) --- an anonymous bar pick-up that her gay "frenemy" warns her to avoid --- isn't enough. Things go a little bit wrong and she lets the poor schmuck live. Sorry, but that just ain't gonna cut it (insert groan here). But there's hope for upping the ante right around the corner. Her sleazy, sexually-harassing pig of a boss invites her over to his place for a bit of "fun" while his wife’s out of town. You already know only one person's coming out of that house alive.

And so Christine's "career" as a serial killer begins, partly done for her own gratification, partly done to impress her ostensible "boyfriend." Shocking enough on paper, but again, par for the Forsman course. Two hopelessly broken souls come together and bring out the worst in each other. Why not? It's a premise that got him all the way to Netflix last time around (TEOTFW is now available as a streaming series on there in case you didn’t know). 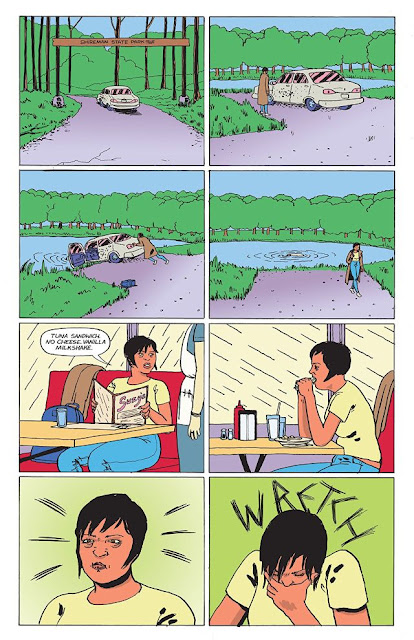 But wait! There is, as it turns out, a twist. And it's actually a damn good one --- so good that I won't "spoil" it, except to say that when Christine finally works up the nerve to track Joshua down in person, she learns that when it comes to the world of online perverts, well --- there's always a bigger fish. And herein lies Slasher's biggest opportunity --- unfortunately, as events play out, it turns out to be a missed one.

For a good chunk of this story’s length, Forsman really does throw a spanner into the works. Things could go in any number of directions. We're thrust, at the 2/3 mark of the story, into the unknown. What will happen next is anyone's guess. Christine's bitten -- or cut --- off more than she can chew. All bets are off. And while I’ll grant you that the inherently conservative and moralistic undercurrent here --- "following your own desires is just gonna get you in trouble" --- is problematic, maybe even borderline-offensive, at least Forsman doesn't take the easy route of info-dumping some clumsy backstory onto his protagonist, of "explaining away" her fetish/need by means of some childhood abuse or trauma . Okay, yes, her relationship with her mother is far from healthy (another point of mutual understanding she shares with Joshua), but Christine is who and what she is, and now that we know that, can her emotional survival be negotiated in a world specifically aligned against that very possibility? That strikes me as a very worthy and challenging question. On the other hand, though, "no, it can't, so don't even try or you're doomed?" That's a gutless and far too easily-arrived-at answer. 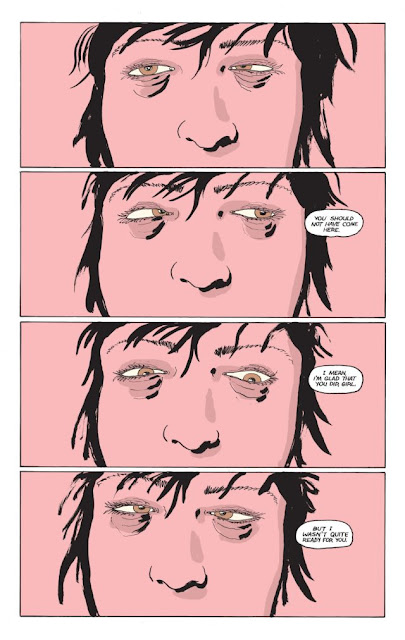 And "gutless" is the operative word for Slasher's final act. The inexorable tug begins almost as soon as the previously-referenced plot twist runs its course --- the magnetic pull toward what we've come, in fairly short order, to recognize as a typical Forsman ending. And he just can't resist. Maybe it's not even realistic to expect him to yet --- after all, in the scheme of things,, his career's just a handful of years old. But the simple fact that he shows, just pages earlier, that he’s willing to at least entertain the possibility of breaking his self-cast mold demonstrates that he recognizes it exists, and that some sort of way out of it must exist, as well. Then he seems to shrug his shoulders and admit that whatever that way may be, he just simply hasn't found it yet. For the time being, at least, he's a cartoonist who no doubt excels at taking readers out of their comfort zones --- but clearly isn't ready step out of his own, which is more than a bit of shame --- the opportunity to approach the questions he broaches about alienation and the way it manifests in a person’s pyshosexual urges in a new and more provocative way is there for the taking here, but at this point would it shock you to learn that Slasher ends the same way that The End Of The Fucking World does? The same way that I Am Not Okay With This does?

As stated at the outset, Slasher at least leaves the reader with many questions to think about --- unfortunately, the biggest and most pressing of them is "When is Charles Forsman going to take the leap forward that he's been on the cusp of for some time now"? It very nearly happens here --- but he pulls his knife back at the very same moment Christine thrusts hers in for the final time. If you’re new to Forsman’s body of work, then you may get a lot out of this, but if you’re a longtime reader, well ---- this is just a bloodier version of a story he’s told us a couple of times already.

Ryan C. lives and works in Minneapolis, Minnesota. He writes about comics for Daily Grindhouse, Graphic Policy, and at his own blog. He also maintains a long-running film review blog, Trash Film Guru.