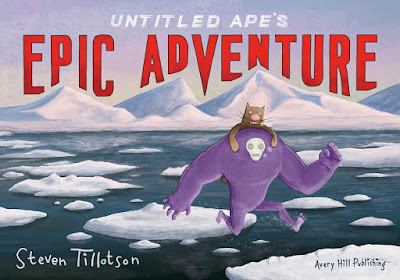 Steven Tillotson’s Untitled Ape’s Epic Adventure is a joyous undertaking of understanding and unpacking. It’s as if Tillotson, with the deftness of an origami master, folded a map into a beautiful crane that takes on a life of its own while still providing directions. New paths are formed where the folds intersect, while the bird stands ready to take flight.

The narrative of this book is, for lack of a better term, bonkers. Trying to explain it here would only lead you to begin to question my sanity, as it shifts, constantly one-upping itself in absurdity. The story is, as I said, bonkers.

The back cover blurb reads: “On this particular morning in this particular place, Untitled Ape (a giant purple ghost-beast) has decided he needs to see his family. His friend Cat (a cat) doesn’t think it’s a particularly good idea, but at this very moment a massive storm rolls in and their epic adventure begins. Without a map or much of a plan, they journey through flooded cities and stormy seas, across frozen plains and snowy mountains, and even up into the world of the clouds on their quest to find Ape’s home in the jungle. Meanwhile and elsewhere, Ape’s past is starting to catch up with him, and it becomes more and more difficult to keep his dark history from Cat… What happened to Ape? Why doesn’t he have a name? And can he resist the pressure to return to his old life and make sure his friends and family are safe?”

Each step forward in this charming and poignant comic reveals new truths and extends the depth of every character introduced. With each turn of its pages, you venture further into this odd enterprise. As you read Untitled Ape, you begin to wonder if Tillotson is making all this up as he is going along, aimless and full of jokes -- a prank battle between a yeti and a mammoth, a world in the clouds staffed by bureaucratic birds, beasts of hell who think twice before being beasts. And yet, there you are at the end of Untitled Ape’s Epic Adventure in exactly the place you needed to be all along. 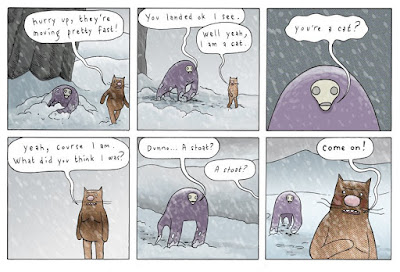 Tillotson’s art expands the surreal nature of this epic adventure. There is a casualness to his line and a warmth to his palette that functions like well-worn, Naugahyde Barcalounger; it envelops you, lulling you into the snug comfort of the familiar, the soft support of the easily recognizable. Then, suddenly, perspective heaves or there is a flurry of panels on a page or, seemingly out of nowhere, Tillotson evokes Hieronymus Bosch’s The Garden of Earthly Delights. Each lurch in style jolts your reading, pulls you out of your idleness, as if someone, giggling, ran an electric current through your chair.

As is true with so many other things in life, the most epic adventures tend to be the ones you don’t even know you are on until after they have ended. The stories we tell over and over are the experiences that can only be fully appreciated in retrospect. By folding the map, you discover new paths or you bring separate journeys together onto the same road. And sometimes, through our careful folding, we create objects of art out of our maps, ones that will transcend the comfortable and fly off on their own adventure.

Steven Tillotson’s Untitled Ape’s Epic Adventure is this art object. It is a damn fine journey to go on. 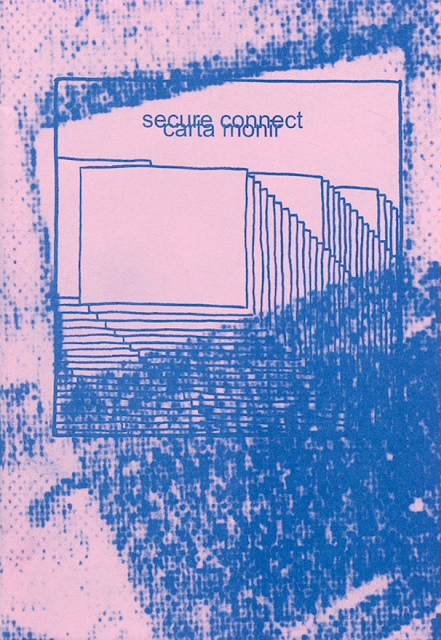 Carta Monir’s new mini, Secure Connect, released by 2dcloud, does a beautiful job of helping me understand the world from the perspective of a complete stranger, a person who I probably wouldn't have looked at closely if I saw them in my everyday life. It provides me a strikingly intimate portrait of a woman whose unsettled life is very different from my own very settled life. In doing so, it shakes me up, allows me to feel emotions I wouldn’t have experienced, makes me understand the world through someone else’s memorable eyes.

Secure Connect puts readers in the head of a trans woman named Maria as she takes part in an anonymous online support group. She and three other members of the group take turns sharing images from their past, discussing fears about their lives, and wearing an image that means a lot to them. The process seems on the surface to be simple, helpful, and companionable. However, as Maria experiences the chat, the emotional nakedness of the chat only makes her feel more estranged from herself.

With Monir’s intimate approach to design and storytelling, readers feel themselves experiencing the chat as Maria does. Monir’s varied approach to page design, alternating between straightforward comic storytelling, small cameo panels mixed with text, and images from computer screens, shows Maria’s reactions in a dizzying array of images as headspinning for the reader as they are for her. We sense Maria’s mood shifts as she is confronted with highly fraught sexual images that make her feel voyeuristic and uncomfortable. We can imagine her face curl in disgust, confusion, or delight even when Monir chooses to depict the computer screen instead of the human face. This interior/exterior dichotomy beautifully captures the way we interact with the internet. This seemingly ragged storytelling approach, in fact, delivers deep insight. 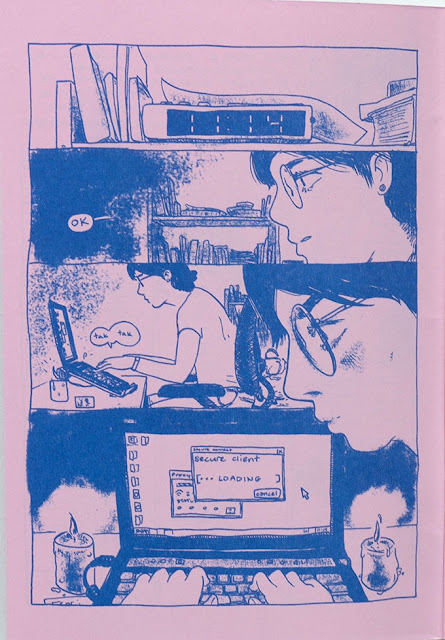 A key moment in the book is one of deep and revealing angst. Maria shares a photo of her former male identity to the group but doesn’t reveal that it is her. Instead she says the picture is of her boyfriend in the middle of a sex act with her. Monir juxtaposes the clucking disapproval of her chat companions with the disgust Maria feels about letting others see a picture they describe as making them “shudder” (as one says) at the man’s “memorable eyes”. We are only shown the image for one page, but the resonance of that photo bounces throughout the rest of this book, as it constantly does around Maria’s mind. Just like real life, the past experiences she carries in her head are inescapable. She has complicated feelings about her previous identity, a mix of disgust, empathy, and self-love. The chat brings all those feelings to the surface. Though the reader has had different experiences from Maria’s, her reactions cause us to reflect on changes we have made in our lives and whether we might lie about the person we were in past lives.

Thus we see that the “secure connection” Maria is searching for may not be in a group of anonymous strangers with different life experiences than hers. The “secure connection” for which she is truly searching is within herself. As she says at the end of the mini, “An image of my face hidden under so many other images until the system can’t handle it. What am I underneath? I am blank paper.” Monir implies that until Maria can fill in that blank paper, she will always remain disconnected from others. Until she is filled in, Maria is compelled to lie about herself, even in an anonymous situation, because she is lying to herself. However, in Maria’s final statement about being a blank piece of paper, we have a small moment of optimism. We don’t know what will be written on that paper, but we’re left hoping it will bring Maria more profound connections to the world around her.

But connections are fraught with emotional risk and seldom are made without cost. Each of the members of the chat is asked to repeat the mantra “I will remake myself in my own image.” However, an image implies an external state, a view from outside the head of the person being remade. Often the most insecure connection we make is the one we make within ourselves. Maria says, “To be honest, I haven’t felt good about tonight’s session.” In her ambivalence about the session, we also feel an ambivalence about her ability to remake herself. She no longer is the man who makes others shudder, but she still has those intense eyes that still provide a nuanced view into her complex soul.

Carta Monir provides a deep connection to a complete stranger. Maria may be an enigma to herself, but under Monir’s empathetic guidance we gain sympathy and understanding of Maria and, therefore, of ourselves. Secure Connect provides a connection to others as people and provides insight into the reader’s life as well.