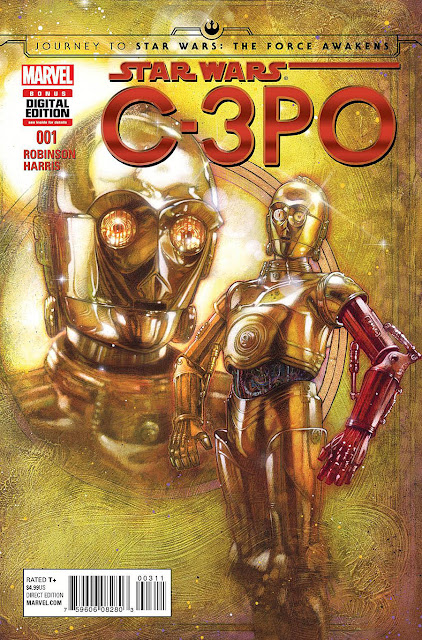 Over on Comics Bulletin, Chase Magnett and I got drunk and wrote about
STAR WARS SPECIAL: C-3PO  #1 from Marvel for our column on the site called
Crocked Critics.

We waded into this thinking it was bound to be a tire fire, but it ended up being one of the most impressive books either of us have read.

C-3PO talks about their memories being in the hands of “their creators” later on. Omri talks about the necessity of protocol droids having “an extra degree of sentience”. And then, given that they have these “Phantom” memories of which you alluded to, Chase, he then wonders “How important have I been?”
Which hits right to the core of all of us. Right? As we are essentially the summation of our experiences (sprinkled, as it were, with a fine dusting of genetics), it stands to reason that the ultimate human question is “How important have I been?” To have these words come out of a construct, a droid, throws so much sand in the eyes of philosophy that I kind of went weak in the knees when I read it.
What the hell is James Robinson’s end-game here? How much of this is pre-ordained by the corporate concerns of Marvel/Lucas Films/Disney — and how much of this is the expression of an artist who, given the simple task of explaining how C-3PO got his fucking red arm, takes that narrow conceit and shows his true artistry?