Scrolling To The New World: Stela, Digital Comics, and ROME WEST -- a review

Before even beginning this review, I feel I must make full disclosure: Justin Giampaoli is a friend of mine. He has bought me drinks and tacos. He introduced me to Eel Mansions and helped me unpack Stray Toasters. I admire him as one of the great comics critics of our time and consider him a role model for the kind of man I hope to be. 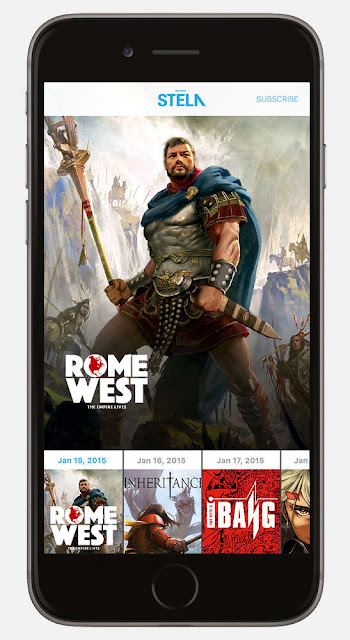 Stela launches today. Stela is a new subscription service digital comics platform featuring exclusive, “digital native” content for the iPhone that, unlike other available options, is specifically configured for a smartphone screen, utilizing scrolling instead of tapping or swiping (if you had told me that I would eventually write that sentence 20 years ago, I would have looked at you as if you were insane and, subsequently, either hidden the knives or punched you in the throat). Stela is a free app available to download through the Apple App Store. All first chapters of each of the series it will be publishing will be free for everyone, so it's a no-risk read. Monthly subscriptions, though, are priced at $4.99 (US) for a limited time.

In terms of why all this is significant or ground-breaking or interesting or whatever, check out what Brigid Alverson wrote for CBR or Luke Brown wrote for Comics Alliance. They seem to understand this shit. I’m an old man who has trouble enough trying to figure out how to change my ringtone (can someone help me put “Cat Party” on it).

For me, though, what’s exciting about Stela are the comics. According to Alverson’s article, “The initial lineup consists of five series: Rome West, written by Brian Wood and Justin Giampaoli, illustrated by Andrea Mutti, and colored by Vladimir Popov; Teach, by Stuart Moore and Greg Scott; Inheritance, by Ryan Yount, Kidman Chan and Yumiki Hong; Out with a Bang, by Stuart Moore, Tony Talbert, John Heebink, Chris Marrinan and Marissa Louise; and Afrina and the Glass Coffin, by Irene Koh.” It’s my understanding that there’s going to be even more original content from top names coming down the pipe.

Regardless of all this digital hootenanny and whatnot that I really don’t understand, though, what I really want to talk about is Rome West. 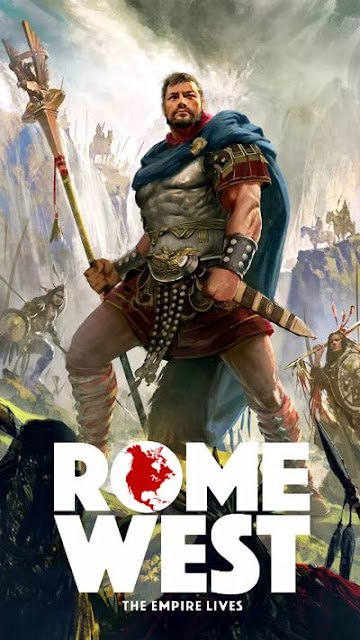 As Alverson mentioned before, Rome West is co-written by Brian Wood and Justin Giampaoli, illustrated by Andrea Mutti, and colored by Vladimir Popov. The concept behind this series is, “What if the Roman Empire came to the New World 1,000 years before Columbus?” The story starts in 323 AD (and is scheduled to run to the present day), and it begins, dramatically enough, with Roman galley ship, tempest tossed, lost at sea.

There is, of course, a great literary tradition of beginning a story with a boat in the midst of huge storm. Shakespeare, for example, understood both the dramatic and symbolic resonance of such a hook. Most of the action of the first “issue” of Rome West is embroiled in this man vs. nature literary conflict, and while Wood and Giampaoli use this to develop their characters (in the classic mode of showing how they respond in the midst of trauma), artist Andrea Mutti and colorer Vladimir Popov do most of the heavy lifting in terms of moving the action along. 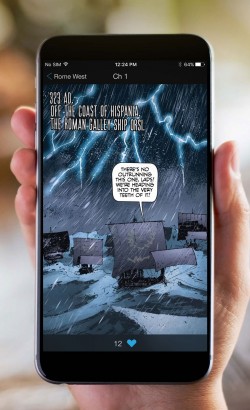 Together, this art team conveys not only the struggle of the men on the boat, but, more importantly, the sheer force of the natural world unleashed. Here, the rain stings and the lightning burns and all of man’s ingenious riggings and supposed mastery over nature is ripped asunder and torn to shreds. Each image almost induces the nausea and vertigo of seasickness as the waves crash over the bough.

If this is the kind of storm we are going to see more and more of thanks to climate change, then I, for one, am moving to higher ground.

Battered and despondent, though, the Romans finally spy land. And Mutti and Popov fully render the, as Fitzgerald called it, “fresh green breast of the new world” and we, as an audience, come “face to face for the last time in history with something commensurate to (our) capacity for wonder.” This land, this nascent country, is an Atlantis to the eyes of the bedraggled Romans, with its spoils ripe for plunder and conquest, a Rome West. The only problem is that there are already people there, the Lenape tribe, innocent and curious., ready to be overwhelmed and subjugated by a superior force destined to rule.

It’s an old story, but given Brian Wood’s ability to transform history as demonstrated in works such as Rebels and Northlanders, Rome West is bound to bring something entirely new to the trope, and the additions of Giampaoli, Mutti, and Popov to his team seem to guarantee this.

Rome West is a brave new world available through what seems to be an interesting new distribution model that may speak to the future of comics.