I just received the two latest releases from Kilgore Books and Comics: the latest installment of Noah Van Sciver's personal anthology collection BLAMMO and a collection of handwritten interviews conducted by Dan Stafford called I HOPE THIS FINDS YOU WELL.

One publisher. Two books. The Yin and Yang of the Emotional Roller Coaster. 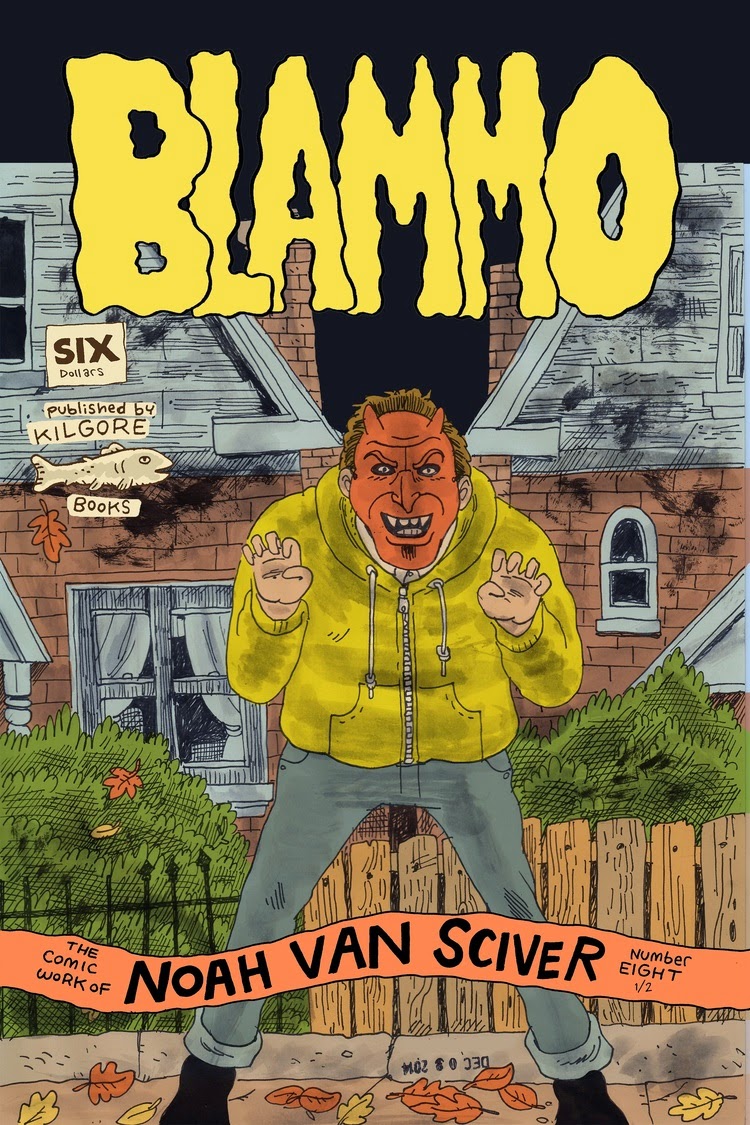 Make no bones about it, I'm an ardent admirer of the work of Noah Van Sciver. His writing and art style have taken me to places I've been uncomfortable going, because they often hold up a vaguely reflective mirror to the self. The last Van Sciver book I wrote about, SaintCole, had me thinking about my relationship with misery. Blammo #8.5 has me thinking about my relationship with loneliness and depression.

I made the mistake of reading this book on what had already been a shitty day. Misery loves company, I guess. When I got to the last page and put the book down, I had spiraled into that wet, brown paper bag of a place that craves darkness and lying down and turning off everything, especially your brain. With this book, Van Sciver binge watches his own downward spiral. Its effect is damp as it is dampening. It's unyielding in its familiarity and should come with one of those trigger warnings that everyone wants to put on things nowadays.

Yet it starts off so hopeful – A little boy imagining he is destroying the monsters that lurk under the surface of the sea. But this youthful vigor is just a product of day dreams. The reality of the day to day as he has grown to be a man is oppressive in its heartbreak. Each vignette that comprises this anthology builds on a sense of isolation and purposelessness, misery and desolation. 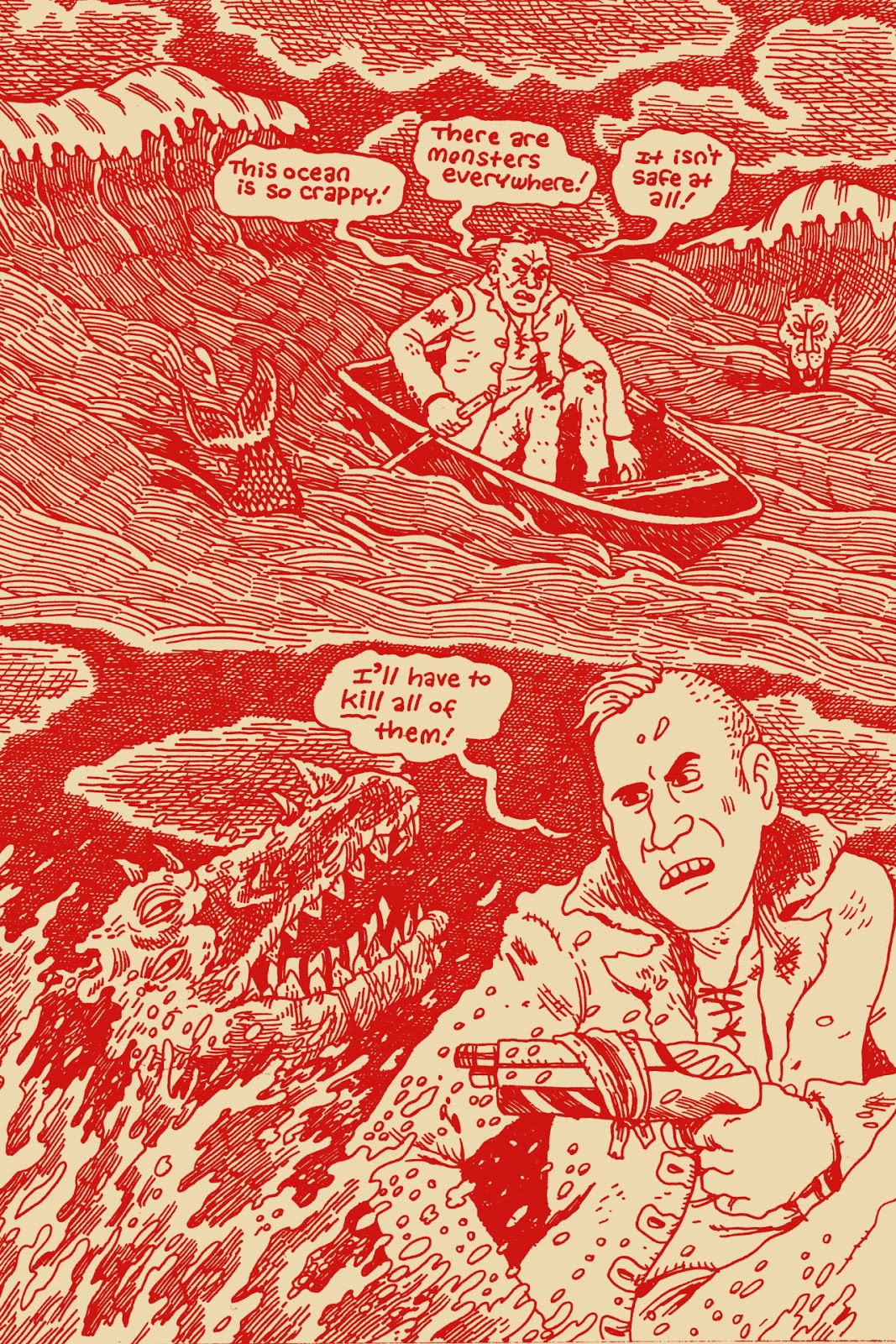 “ALONE. The scariest word I could think of. It seemed like the only probable future.”

Van Sciver is an artist who is able to convey emotion with such visceral ease through commonplace moments, and when he is this frank, this open with his emotional destruction he fires a laser beam of bleakness into your limbic system that is crippling if you have any proclivity towards depression. It's as if he is blowing the trumpet notes to a blues version of Reveillle, summoning an army of the sad from their barracks, hoping that by bringing us all together, by making us face that we are not alone in our loneliness, that our darkness is no darker than the shade imbued in the man or woman standing next to us, we just might make it through. 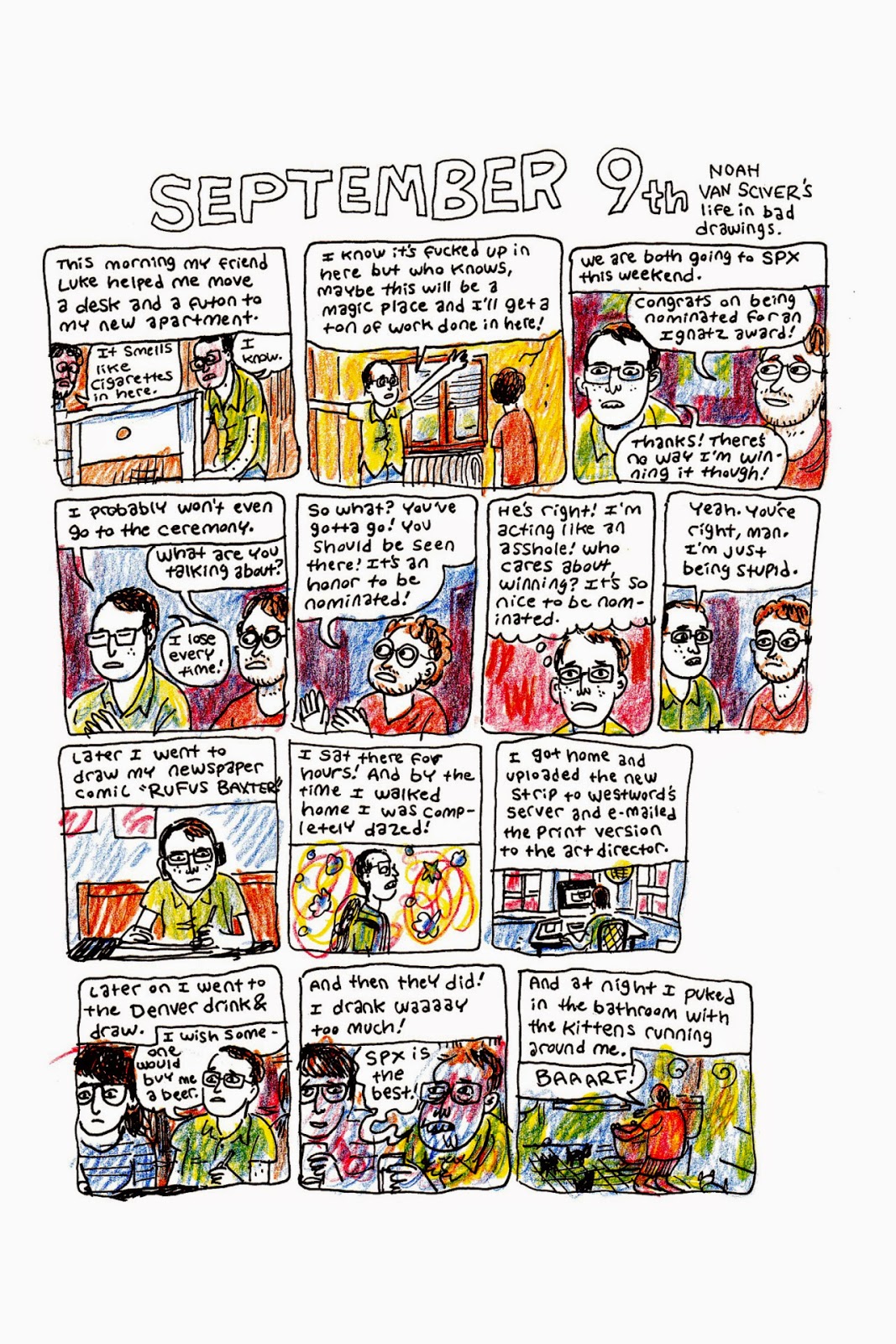 Whatever light moments Van Sciver slips into Blammo #8.5 serve only as a reminder that joy is elusive. It is the beautiful sunset that occurs before the long night. The universe doesn't tend towards entropy, it tends towards Depression. This is the constant.

I HOPE THIS FINDS YOU WELL 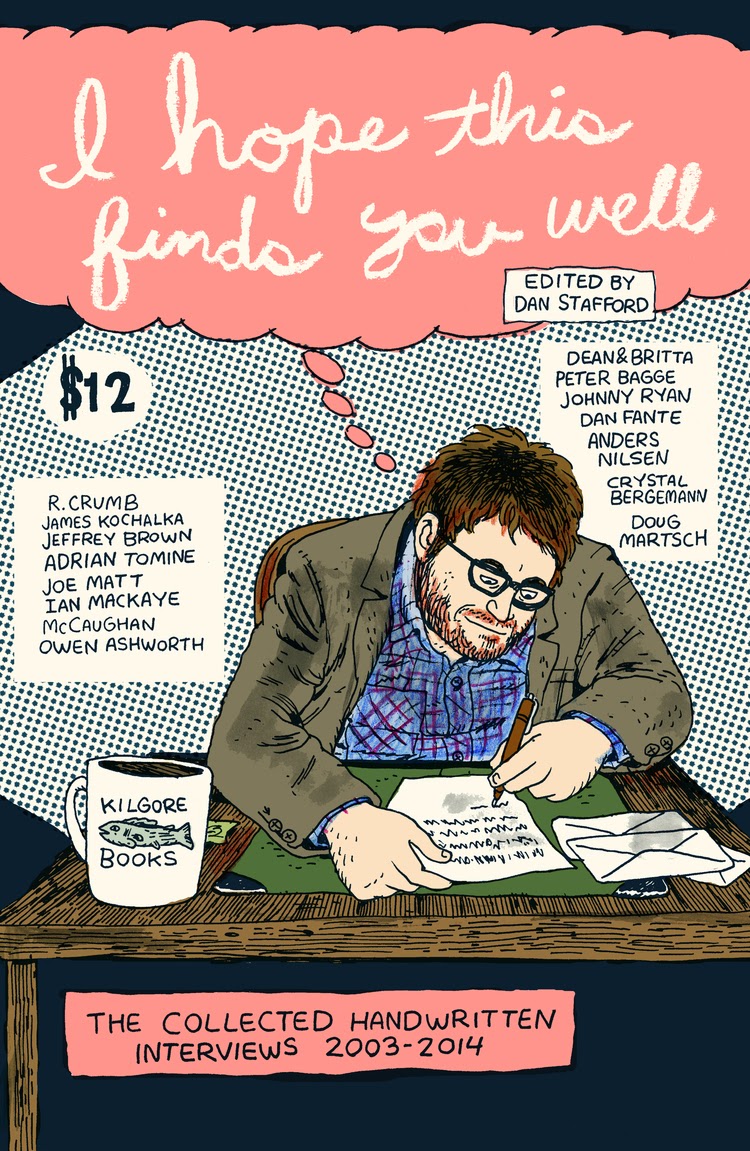 The back of this collection states that “since 2003, Dan Stafford has been conducting handwritten interviews with cartoonists, writers, and musicians he admires.” Apparently he has been publishing these interviews in The Kilgore Quarterly, but with I Hope This Finds You Well, all of these interviews are collected together for the first time.

As you can see from the cover, Stafford has interviews with comic book heavyweights like R. Crumb, Jeffrey Brown, Anders Nilsen, Peter Bagge, Adrian Tomine, and more. He also interviews musicians like Ian MacKaye of Fugazi, Doug Martsch of Built to Spill, and Owen Ashworth of Advance Base and Casiotone for the Painfully Alone. It's an ecclectic group, certainly, and yet through Stafford's innocent, softball questioning, the book holds together as a whole. 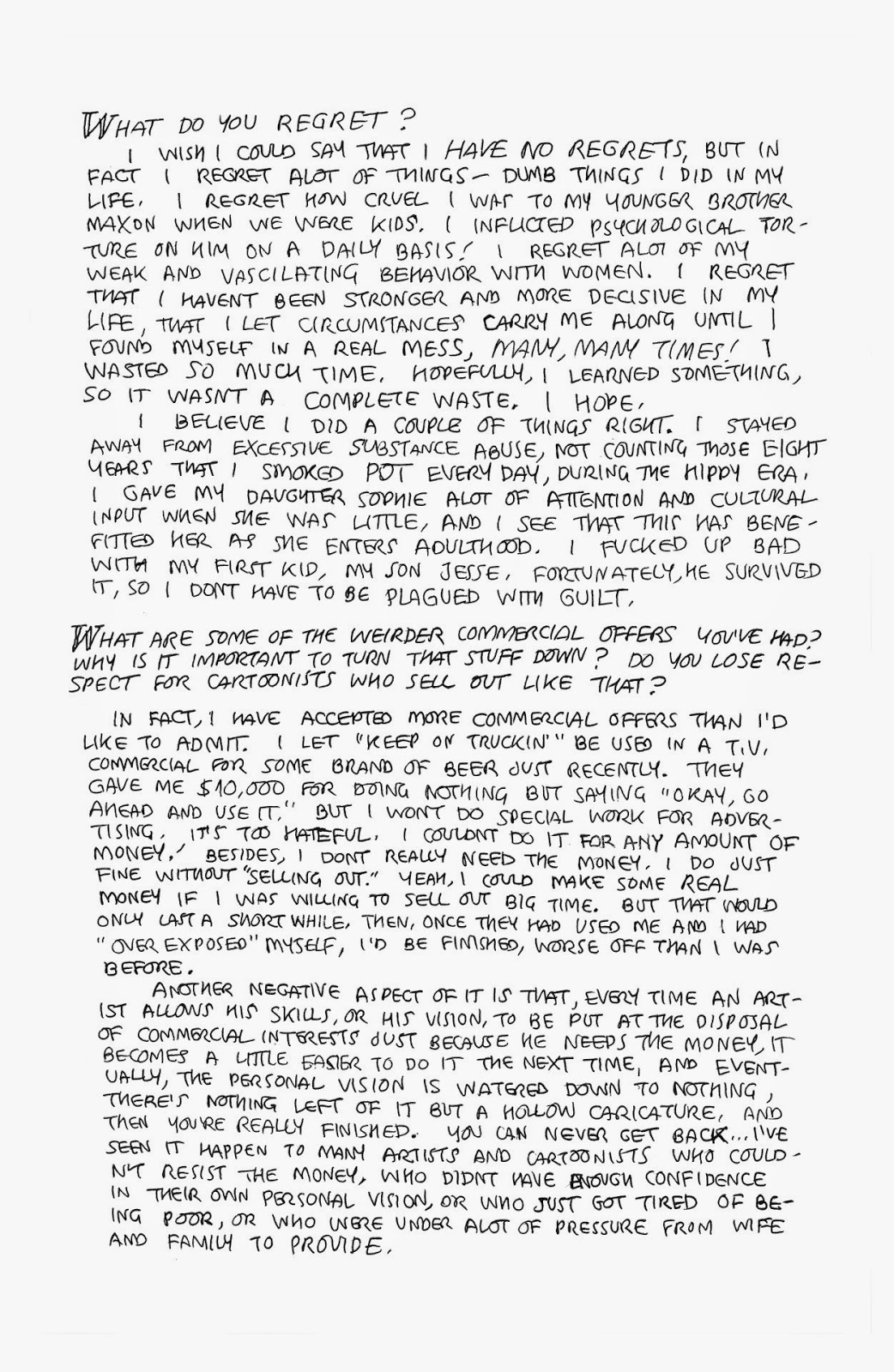 These are handwritten interviews. In handwriting. Sent through the mail (Stafford even includes pictures of the envelopes. With Stamps!).

The conceit of the collection encompasses the majority of its charm. Were these interviews presented clean and orderly, type faced and crisp, much of the personality of the person being interviewed would be lost.

There is something about the artisanal (god, I know, I wish I had a better word) nature of these interviews that makes reading them such a fulfilling experience. It brings me back to my days of writing epic 20 page letters to my friends across the country instead of two paragraph emails or 140 character check ins.

Is life better because of the instant nature and ease of this type of communication? Certainly. I've never been more involved in the lives of my distant friends and family, and I can contact them the moment I think of something I want to share. It's pretty fucking amazing when you think about it.

But there is a certain “something” missing in this immediate correspondence. It is reduced, in a way. There's a little less preciousness to the words, a little less soulfulness to the thoughts, less importance attached to the moment. When I dash off a tweet to a friend, I'm still saying that I'm thinking of you, I care, I miss you, you're important to me. I'm still saying all these things, just in an effortless way.

Like all things we have come to value because of the potency of the labor they require to produce, handwritten letters glow with the aura of effort, the momentousness of more than a moment. 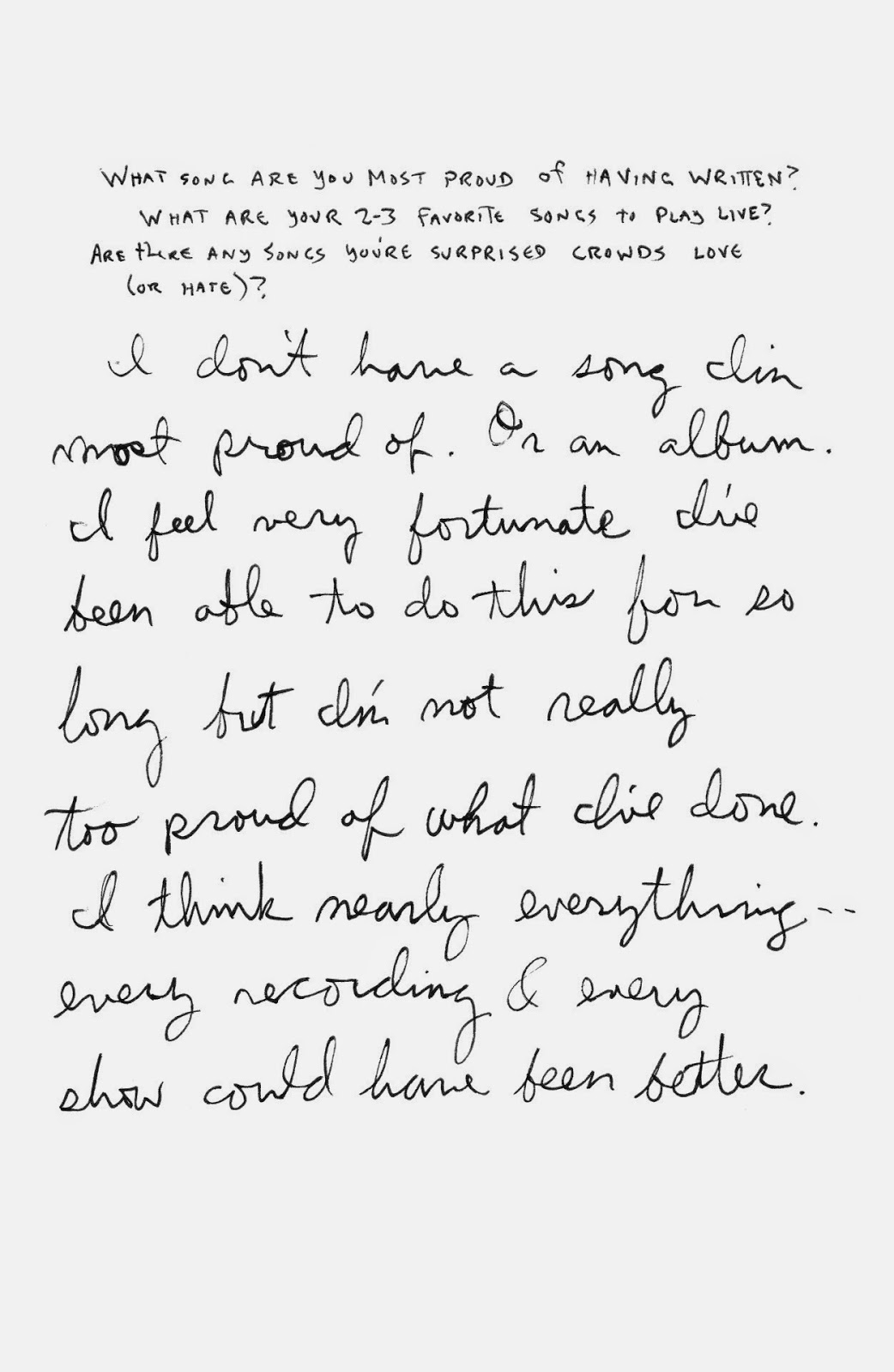 The interviews in I Hope This Finds You Well are not ground breaking. Stafford asks all these artists many of the same questions they've probably been asked many times before. But because the artists have to write their answers, they are creating something more than just an answer. In a small but meaningful way, they are creating art about their art.

And that probably has more value, ultimately, then these words typed up neatly and posted on the internet ever will.

On a side note, Stafford is also the man who put together the wonderful documentary about John Porcellino called Root Hog or Die, which I also suggest you check out.

You can get both books, BLAMMO #8.5 and I HOPE THIS FINDS YOU WELL at the Kilgore Books site here.