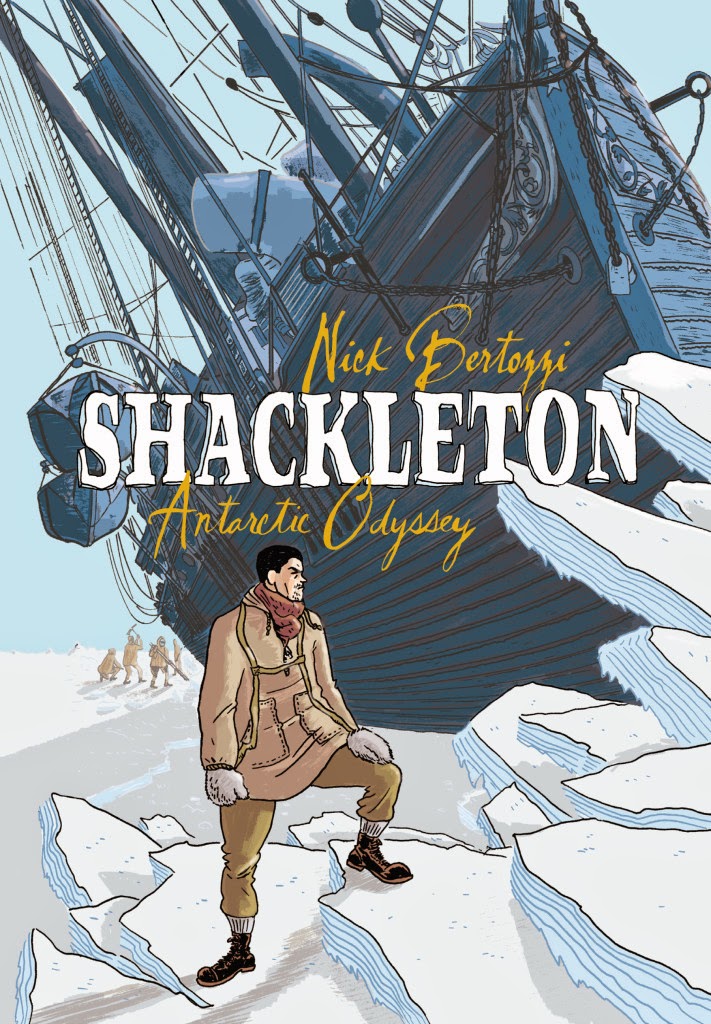 Giampaoli: I don't know, you guys. Shackleton: Antarctic Odyssey seems to fit in this nexus of genres that I didn't even realize I was drawn to, which may best be described as "Historical Exploration Fiction." I love books like Image Comics' current hit Manifest Destiny (chronicling Lewis & Clarks' Corps of Discovery Expedition mashed up against the supernatural), Nick Bertozzi's own superb Lewis & Clark previously published by First Second, Ben Towle's daring Midnight Sun (chronicling the adventures of a lost Italian dirigible exploring the North Pole), T. Edward Bak's Island of Memory (charting a Russian Expedition from St. Petersburg to the Kamchatka Peninsula), or even the slight historical bits about McMurdo and Amundsen that play as the loose backdrop for Greg Rucka & Steve Lieber's old Oni Press hit Whiteout. The snowier, the better. Man seems to have an innate desire to explore, just because the thing is there, a primal drive to bring order to chaos by making the unknown known, and Shackleton rests nicely in this storytelling milieu.

It's the story of Ernest Shackleton's third go at Antarctica, this time attempting to craft a new record with a transcontinental expedition after Roald Amundsen beat everyone to the South Pole. Nick Bertozzi's rustic aesthetic captures the harsh conditions of the WWI-era endeavor, but his slight lines are also effervescent enough to lend a swift sense of energy and unpredictable danger. It's really the perfect balance of artistic impulses. I also love the diagrammatic ability he uses to compose a page. Some of my favorite parts of the book were the schematics of the ship, the crew listings (complete with a list of all the intrepid dogs!), and where the Shackleton expedition lies in the historical procession of previous attempts. His intended plan to traverse the continent is documented with this cartographic glee as well, and it allows things like the roster entry of the stowaway on page 21, a visual callback which has already been coded for the audience. What I like about Bertozzi's work in general is his willingness to lace the concrete factual elements with entertaining fictional extrapolation. His historical fiction then Venn Diagrams its way into the educational space as well. I've got a lot of teachers in the family, so it's always great to see instances where comics can bridge the gap to the classroom. Elkin, could you-would you-have you used texts like this in your day job?


I was really struck by Shackleton's personality, it seems true that there's got to be a little bit of an obsessed madman in all of the great explorers. It seems that conventional wisdom just does not get the truly big jobs done! This can run on one end of the spectrum and be a little grating. For example, Shackleton props up the expedition by publicly indicating that it's all for the British Empire and King Edward, but it's clear that he's also in it for the personal glory. On the positive end, his goal-oriented determination and unyielding dedication to the safety of his crew is probably the only thing that kept them alive as they endure a complex approach that ultimately sees them beset in off-shore floe, spending a remarkable full year living on the ice. They're caught in a treacherous process of exploiting breaches to the open sea, uncooperative winds that push them northwest when they need to travel southeast, and a continent that constantly seems to repel them, as if it's not yet ready for the act. As Shackleton loses the transcontinental march, survival becomes their only objective. Through retreats to Elephant Island, and then South Georgia, they brace 300 foot 'bergs, the raw power of tectonic ice pressure that swallows their ship whole in a slow death, and ultimately eating their last dog – a looming on-panel discussion with grim off-panel consequences. By the end, I felt like Shackleton: Antarctic Odyssey could be characterized as "Apollo 13 via Antarctica," in that it was a "successful failure."

Elkin: I had no idea what to expect from this book, Giampaoli, as I only knew the story of Shackleton peripherally and my exposure to Bertozzi's work consisted of his latest Kickstarter funded project, Persimmon Cup, which compared toShackleton is like comparing a Bahn Mi to a Quarter Pounder. Cracking this book threw open wide doors to the man I wish I could be.
Did guys like Shackleton actually exist? What was it you said, Giampaoli? "Goal-oriented determination and unyielding dedication"? Dude, that hardly scratches the surface. Were I to have even a quarter of this man's gumption and get-up I would have by now published 12 novels, 4 epic poems, and 200 issues of Man-Thing after having built my own home and learned how to fly. Talk about feelings of inadequacy, the very act of reading this book left me feeling vaguely emasculated. And Berozzi gets this – he swamps his narrative with instances of Shackleton's unrelentingly good-natured resolve, yet through his line-work and the openness of his panels the reader is not overwhelmed by the force of Shackleton. It is an amazing interweaving of narrative intent and artistic choices. The reader feels the danger and the earnestness in a way that neither distances nor submerges. And yet I had a slight issue with the tone all this conveyed. I began to disassociate a bit, feeling there was too much fiction to this non-fiction – which I gather there was not. And yet through his cartooning and the almost cartoon-like nature of Shackleton himself, I lost contact with the story and started reading "story".
But maybe this emprise just invariably lends itself to unreality. They just don't make men like Shackleton anymore, do they? Our distance from that sort of adventurous spirit makes it harder to wrap our heads around. We've made X-Games out of our need for excitement, we've made travel guides out of our need for adventure, and we've made all our children wear helmets whenever they leave the house. When I hear my students complain savagely because they are getting slow Wi-Fi in my classroom I shudder at what we are becoming. When I go to any public place and everyone is staring blankly into their phones, I want to toss hay bales at them and shout "Baaaaaaa". Maybe I'm over-reacting a bit, but I guess that my inability to connect fully with Bertozzi's take on Shackleton has led me to examine questions of manhood and exploits and what we are becoming as a species. You mentioned that "primal drive to bring order to chaos by making the unknown known", Giampaoli. I guess I don't see that drive so much anymore. I just see a lot of people who want to be comfortable, entertained, and acknowledged for their ability to be comfortable and entertaining.
Still, this is supposed to be a review of Nick Bertozzi's Shackleton: Antarctic Odyssey not a diatribe regarding how soft we are around our middles. Let me end my two-cents by saying I enjoyed reading this. It opened up to me as much as I opened up to it. It's an incredible story conveyed by an amazing artist and well worth your time and money. Sacks: I'm a big fan of the podcast Hardcore History, which for me is the perfect layman's take on history. It's not bogged down in jargon, it tells the fascinating stories of history from a human standpoint, and presenter Dan Carlin always remembers to talk about the big picture as well.
Recently Carlin's embarked on a series about World War I, which is appropriate since we're right around the 100thanniversary of that horrific conflict – and also means that we're now 100 years past the beginnings of the creation of the civilization as we know it. In nearly every country (with the fascinating exception of the United States), there was an experience before WWI and there was a very different experience afterwards. Generations of boys were nearly completely wiped out, economic and emotional devastation were rampant, and a certain breed of men seemed no longer to be minted.
It was if the war stripped away the whole idea of exceptionalism in continental Europe – with some exclusions, of course – and destroyed the kind of atmosphere in which a man like Ernest Shackleton lived. He was bold and lusty in a boy's adventure novel sense of the term, full of boundless ambition and dauntless courage. He was a man of the early twentieth century, and makes me feel like the same type of girlyman that Elkin, my brother from another mother, feels like as well. One of the most striking things about the war itself is the stark and horrific existence in which the soldiers were ordered to live. World War I was a dehumanizing war in ways that had never even been imagined before – and which were only matched and exceeded, of course, by its dreadful sequel World War II. But the soldiers who were pressed to service had no choice but to simply live that life, lest they be shot for desertion. Those sad, brave men did their duty, fighting in their horrific muddy trenches in freezing cold weather, rats running over their feet, feces and dead bodies piled all around like cordwood, the stench overwhelming anyone who was not already part of that war effort.
It’s in that world that Shackleton lived. It was an era in which men did what they had to do. It was an era when the men were forced to deal with privations that seem unimaginable today. And it was also an era of quiet, small triumphs. Shacklelton's unbelievable journey was a triumph that seemed almost insignificant in light of the war but its incredible bravery has made this story timeless.
Like you guys, I loved Bertozzi's Shackleton, though perhaps in different ways than you did. This GN is for me a major triumph of storytelling, of dozens of small, clever touches that grant this story the feel of a larger epic. Justin, you mentioned the clever introductions at the beginning of this book but I also enjoyed the way that Bertozzi uses negative space to convey largeness. He is smart in his interplay between boxed panels that depict a fixed space and unboxed panels that depict the vastness of the desolate Antarctic. And beguilingly simple depictions of his characters is a clever counterpart to the surprisingly complex characters he depicts.

My only real complaint about this book is that in all Bertozzi's thoughtful page design and wonderful linework, everything seems a bit too clean, too abstract. There's danger in the journey that Shackleton and his men take – incredible, overwhelming danger that would crush we wimpy computer geeks and teachers (security dude Justin is probably tough enough to survive) – but I never quite got a sense of that danger from this book. Even in the shocking scenes in which the team escapes in a tiny boat, the art somehow doesn't convey the dauntless courage and shocking grittiness of these men. If you look at photos of the Shackleton expedition, there's a pain, stress and heroism in those characters' eyes. I don't quite see that in Bertozzi's work.
Still, Shackleton provided for me the same kind of pleasure I get when I indulge in Hardcore History. The complex is rendered comprehensible, and the intrepidness of previous generations is laid bare. This is a fine graphic novel that deserves to be considered with the excellent Midnight Sun and Island of Memory.
We truly don't make men like Ernest Shackleton and his team anymore and that makes the world a worse place.