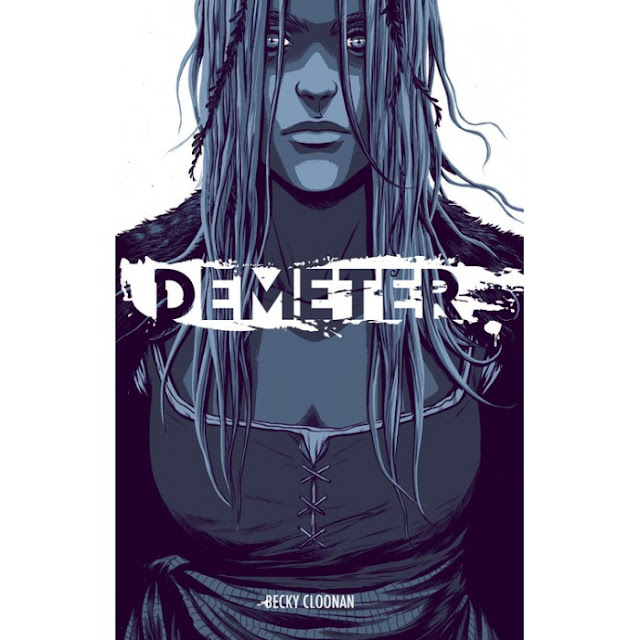 Keith Silva: Becky Cloonan loves love. Such a capital "R" Romantic like Cloonan would have been at home on the shores of Lake Geneva in 1816 telling German ghost stories with Lord Byron, Percy Shelley and his betrothed Mary Wollstonecraft Godwin. As with her Romantic spirit guides, Cloonan's passion for love always takes a Gothic turn. Like Wolves and The Mire, her latest self-published work, Demeter, demonstrates how Cloonan yokes desire to doom in order to exact love's costs.
A Romantic in good standing, Cloonan grounds her tale of love and loss in legend. In Ancient Greek religion and myth, Demeter is the goddess of the harvest, of grain and of fertility; however, she is best known as thepatron saint fret and fury, the mother of all momma bears.
The story goes like this: Demeter's daughter, Persephone, is abducted by Hades and brought to the Underworld. Demeter's ceaseless search for her daughter causes all plant life on Earth (the Mediterranean) to stop growing and die. Zeus intervenes and sends Hermes to rescue Persephone.
Now, of course, the rule is: if one eats or drinks in the Underworld, it's a life sentence. The God of the Underworld agrees to release Persephone, but he finds out she ate six pomegranate seeds, the horror, and so Hermes makes a deal: Persephone goes home to her mother, but must return to Hades for a third of the year. And this is how the ancient Greeks explain the seasons.

Cloonan takes this myth topsy-turvy. In her (in)version she moves everything seaside. Demeter is Anna and her husband, Colin, plays Persephone, at least, I think that's what's going on. Colin dies asea -- "the sea giveth and the sea taketh away." Anna strikes a bargain -- with who (exactly) is unclear -- seven more months of Colin's life for seven drops of Anna's blood. When the story begins, Colin's time above the waves is growing short; the cæsura (fermata?) is coming to a close. As Cloonan asks in all of her self-published work: What cost love?
Demeter does not unpack easily, it challenges the reader to probe, to parse and to pare back layers and even then mysteries flourish. As with Wolves and The Mire, a dark chest of wonders like Demeter requires and rewards rereading(s). Cloonan's skills as a storyteller are Promethean. Every page, every panel, every brushstroke of ink is imbued with a deluge of meaning. Demeter overwhelms.
Daniel Elkin: As you say, Silva, Demeter does not unpack easily. I've now read Cloonan's tale five times and new questions pop up with each subsequent read. This is the beauty of her storytelling. There is enigma within -- clues to find, deductions to deduce. Cloonan's previous books have been rife with the hidden -- billowing curtains or thick fog. This time she chooses windows and waves as her devices, adding another layer to the motif.

Windows in this book, while clear, are still a barrier, a separation between what is outside and what is in. Though they are transparent, they still distort, frame, limit, define. In our world, they are the panels through which we often view the world around us, turning our lives into a comic book (as it were). Cloonan capitalizes on this in Demeter -- windows are featured on almost every page of this book. That which is within is without, our experiences are detached, filtered through the frames of perception. Finding the truth is, perhaps, an act of defenestration.
Waves and water also add to the narrative of Demeter. Water, of course, resonates with the heft of life and rebirth; waves reflect the energy inherent in these concepts. But there is of course the mystery of the deep, as well as how the vastness of the oceans dwarfs us and our petty constructs and illusion of control. Cloonan understands all of this and Demeter is rife with the dampness of these moist ideas.

While Cloonan expertly uses these metaphors to tell her story, Demeter leads to questions unanswered. The narrator shifts in this book from our heroine to our "hero," each telling this story from their own emotional perspective, their own side of the window, one very wet, one dry. And the emotional moment for each narrator is enshrouded in time. Cloonan's other books have played with the temporal nature of storytelling, and Demeterfollows suit -- the future is the present, while the present is the past (does this make the past, the future then? Well, yes, there is a reading of this story that lends itself to this). Is this why Cloonan talks of Greek mythology, yet the action seems to take place along an Elizabethan coast?
Part of what makes Demeter, and Cloonan books in general, so wonderful is that they engender this brand of thought and questioning. Her work continues to layer as you pull back that which hides.
You cannot judge a book by its cover.
And what of the back cover, Silva? That's a vagina with an eye in it, isn't it? What do we make of this and how does it fit in with the rest of Cloonan's purpose? As I said, I have questions...
Keith: I'm not ready to go "vagina," Elkin, not quite yet. Since we're in a Greek way here (he says as he mixes metaphors), I would counter with "omphalos" which (in Greek) means "navel," a place for interpretation -- the oracle at Delphi was said to be an omphalos to communicate with the gods.
Perhaps it is a question of volume or space; volume has no opposite, no counter, only more and more.Demeter is awash in meaning and therefore interpretation all the way down to its watery depths, but how much is too much?

As you write, Elkin, windows act as metaphor for Demeter -- an absolutely brilliant reading -- because they both obscure (Cloonan uses mullion windows, natch) and reveal. How the reader interprets this obstruction (?), however, is outside the narrative. Anna knows what she's done (and will do again) her mind is clear; she lovesColin and always will. Love endures all things, perhaps, even navel-gazing critics.
Daniel: This is a thick book, the thickest that Cloonan has attempted so far -- and I'm not talking page count, I'm talking ideas. There is an obscure ambiguity that exists in these leaves that shields itself from easy interpretation. Is this a matter of: "it's confusing, so it must be deep?" I don't think so. I trust Cloonan as a creator because I have seen what she is capable of in the past, and I laud her with unimaginable praise for pushing herself to expand as a storyteller, an artist, and as a creator. She demands that you pay attention. She refuses to be easy with you. She wants you to work for your entertainment.
I'm willing to do the work. Yet, for me, Demeter remains an enigma. I understand its basic story, but the larger face remains outside, scratching at the window, obscured by the sea. This is frustrating, but it's also a challenge, so I shall return to Demeter again and again until I can unpack it all.

And that's the kind of work that we need more of. Audiences need to mature as their artists grow. By packing this bag so tightly, Cloonan is helping us move to new vistas. Demeter gives us the tools to make this journey. We just need to figure out how to use them.
So, is that a vagina with an eyeball inside of it on the back cover of this book? It is if you can figure out why it could be -- why it should be -- and it is within that process that the artist and the audience connect on a profound level. It is that connection that makes this funny book a work of art.
Demeter has sown the seeds, let us reap the harvest.
Keith: Before I got all Romantic and then caught up in vaginas and navels, my first instinct was to say Demeterfalls into the category of "not for everyone." As plain as this distinction may be for a critic to make and a reader to understand, I find it to be a cheat and without question, dismissive.
As a writer and as an artist, Becky Cloonan is and should be for everyone. Like love like subjectivity is a cruel master. C'est la vie. Cloonan doesn't try to be vague -- although she clearly (?) delights in murkiness and obscurity. Her imprimatur, "Comics Rule Everything Around Me," invites one to revel in the art of storytelling, to take up the challenge and if after all the peeling and paring, the reader finds more layers, more meaning , so be it, that is the rule, to be complicit in the act.

Act. Reap. Harvest. Demeter offers much. How much one finds below its depths depends … on you.